Do you think about kimchi as a condiment? Wonder how to eat it? Or even how to make it? We've gathered numerous facts about South Korea's national dish from a Milwaukeean whose life and business has been built around making connections through kimchi.

It’s salty. It’s sour. And it’s often spicy. But kimchi is also an indispensable element of both Korean cuisine and culture.

"The word kimchi simply means ‘salted vegetable,’" says Saehee Chang, owner of Korea Konnect and Kosari Kimchi, a local product line based on Chang’s mother’s kimchi recipe. "And for Koreans, it’s part of who we are. It’s a constant seen at almost every meal. And it’s a very strange thing to run into someone who is Korean who doesn’t like kimchi."

For many, including Chang, kimchi is also about making connections.

"To me, kimchi represents community and coming together," says Chang. "It represents labor and hard work. It’s about a connection to the land and to our ancestors. You’re remembering those who came before and who passed along the recipes and traditions."

Chang points to the practice of kimjang, an annual autumn gathering during which communities come together to prepare and preserve the spicy fermented vegetable dish. During kimjang, large quantities of kimchi are made and shared, ensuring that every household has enough to last through the harsh winter.

"Kimjang evokes a beautiful image," she says. "It represents what Koreans value and cherish: coming together and creating something that is nourishing and life sustaining."

For Chang, the dish has also come to represent even more.

"As an immigrant women, we are often silenced," she says. "So kimchi for me is about giving voice to my mother… and her mother and grandmother. I started making kimchi for my daughter. At first, we'd go to the Korean grocer in Chicago and I’d buy it for her. But, after a while, she asked me if we could make it ourselves. And we did. Now I’ve passed that aspect of our culture along to her." 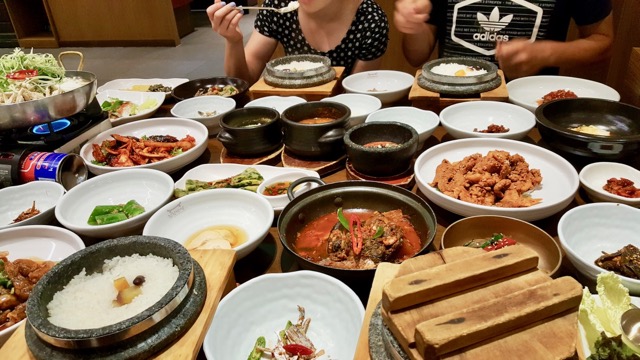 The origin of kimchi, Chang says, is relatively unknown. However, naturally fermented vegetables have been part of Korean culture in one form or another for centuries.

"Early kimchi was not made with chili peppers or garlic," she says. "Chili peppers were actually were actually introduced to Korea in the early 17th century when the peppers came to Japan from the Portuguese. But kimchi has always been about salting vegetables to preserve them."

Many of those vegetables are derived through foraging.

"Korea is a foraging culture," she notes "So many people forage in the mountains, gathering different items including mushrooms, mustard greens, root vegetables and gosari (fiddlehead ferns). All of those can be made into kimchi."

In turn, there are regional variations and hundreds of recipes for kimchi, some made with radishes, others with cucumbers, onions or mustard greens. Even the seasonings vary. Some containing fish sauce or soy sauce. Others contain fruit. A variety of recipes eschew chilis.

"Kimchi is a bit like American Thanksgiving," she says. "Every Korean family has their own twists on traditional recipes. And many of the variations came to be based on class. It was about the types of vegetables that were available to be preserved."

While most Americans tend to view kimchi as a condiment of sorts, Chang says it's more of a side dish.

"Nowadays an ‘average’ Korean person will eat kimchi two or three times a day," she says noting that a traditional Korean breakfast typically consists of rice, a protein and banchan (side dishes, including kimchi).

Chang says one of her favorite ways to eat kimchi is with a bowl of perfectly steamed sticky rice. But she says the dish is versatile and can be used in a variety of ways.

"It can be eaten with eggs," she says. "Or made into a soup or stew. You can put it on a sandwich. And when it gets super sour, I love making kimchi fried rice. Many people are intimidated by kimchi; it’s not everyday food for people here. But, if you think about it, it’s not so different from sauerkraut." 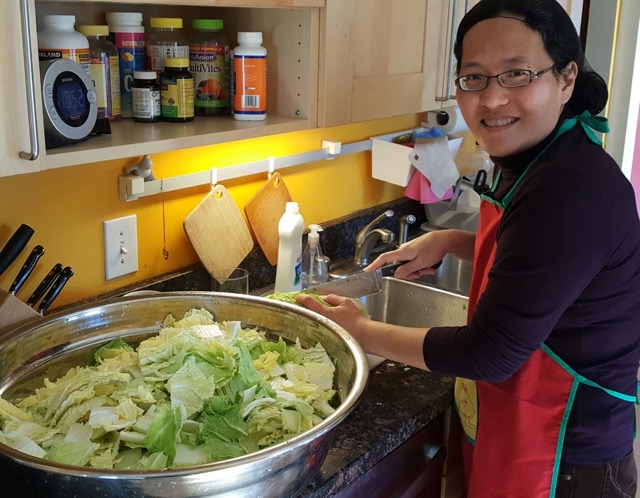 Chang was born in Seoul, Korea. Her mother was a North Korean refugee who had fled her home country after the Korean War. Her father was a native South Korean employed by the Trade Mission.

"Thanks to my father’s job, I was lucky enough to grow up in various parts of the world," she says, noting that over the years she had the privilege of living in Vietnam, Kenya and various cities in the U.S., including Miami and Chicago. But no matter where her family laid down roots, she says there was always one constant.

"Even in Nairobi, my mother still made kimchi every day," says Chang. "She was a good cook, and she’s always been my role model in terms of food. She was my personal cooking instructor."

When she married Marc Haines, a Ph.D. student from northern Germany, Chang says they moved to Milwaukee when Haines took a position at UW-Milwaukee. Once here, Chang worked a variety of jobs. But she found her passion in teaching others about various aspects of Korean culture, including food.

"I started cooking a lot of Korean food at home," she says. "So many people commented that my food was so good, and they’d ask me to teach them how to make different dishes."

"Growing up Korean American has been challenging," she says. "But over the years I’ve found that fear of the unfamiliar is virtually eliminated when people have a basic cross-cultural education. The first question many students ask me is ‘Are you Chinese?’ So, I use that as a way to begin the conversation.

"The best way to break down barriers is to really connect with people and – in doing that – to make those cultural connections. My passion is sharing with others, particularly those who aren’t familiar at all with Korean culture. And more recently, I’ve focused my energy on educating people about healthy Korean food."

Chang says she sees her work as a form of gastro-diplomacy.

"Kimchi brings people together," she says. "I see it in my own life. I connect with all sorts of people that I’d never ordinarily talk to, and it’s all about kimchi. People message me asking how to find my kimchi. They come to the farmer’s market to find me. And I meet Korean people who really want to reconnect with their culture and learn how to make kimchi; and that’s really beautiful and special to me."

Where and when to watch or stream the 2022 Winter Olympics

Olympic medalist Simone Biles is coming to Milwaukee this autumn

Olympic curler from Wisconsin Matt Hamilton gets his own bobblehead