Bay View's first hotel - the dog-friendly microhotel in the former Down and Under Pub building at 2535 S. Kinnickinnic Ave.- is slated to open in January. Co-owner Charles Bailey invited us in yesterday to take a first look.

Check in early and stay late during OnMilwaukee's "Hotel Week" sponsored by VISIT Milwaukee. The next seven days will be packed with stories about historic area hotels, reviews, history, food and drink, staycations and more. Find out what it's like to be a tourist in this town (chocolate on your pillow not included).

Bay View's first hotel – the dog-friendly microhotel in the former Down and Under Pub building at 2535 S. Kinnickinnic Ave. – is slated to open in January. Co-owner Charles Bailey invited us in yesterday to take a first look at Kinn, which is still under construction. 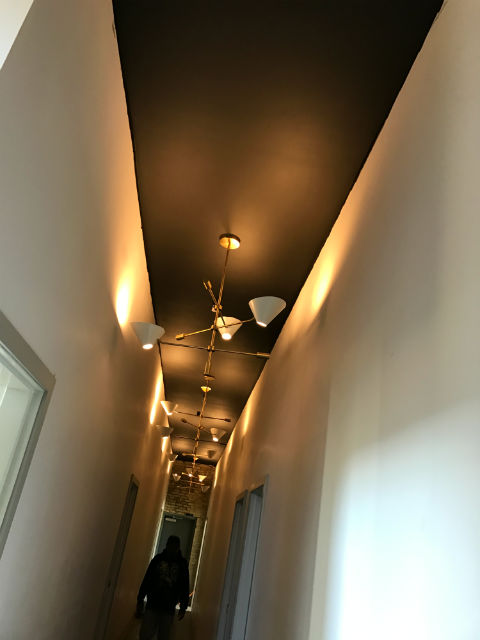 Earlier in the day, Bay View Ald. Tony Zielinski issued a press release with some details of the project, which Bailey – whose father and grandfather worked in the hospitality industry – describes as his and his wife Connie's first, but not likely their last, foray into the hotel business.

At the same time, OnMilwaukee's Lori Fredrich was getting an update on Kindred, the restaurant that will occupy the lower floors of the hotel – and which will also have outdoor seating on a front patio with a firepit – from owners Marija and Vesna Madunic, who also own and operate Firefly restaurant in Wauwatosa, and Gracious Events catering.

The hotel – which occupies a 19th century classical revival building complete with cornice and columns flanking the main entrance – is small, but it's notable for a number of reasons.

First off, Kinn is the first hotel in Bay View, if you set aside The Muse, which is clearly a bed and breakfast, rather than a traditional hotel. 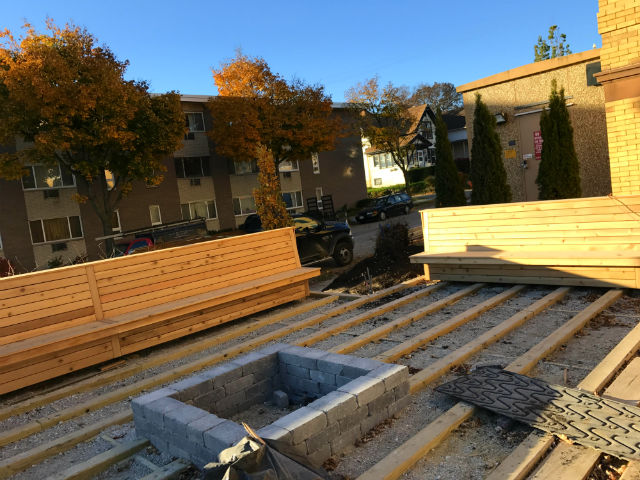 While there's plenty to draw visitors to the neighborhood – including some of the city's best restaurants, bars and coffee shops, great shopping, great parks and good access to the lake and to Downtown – surprisingly, no hotel developer has yet tapped Bay View's tourism potential.

And the location is key, according to Bailey, who says he and Connie love Bay View.

"My wife and I chose Bay View for a number of reasons, and central among these are its beauty, proximity to the lakefront, walkability and security," Bailey has said. "But, perhaps most important is its sense of community which a person, whether here for a day or a lifetime, can’t possibly avoid. It's palpable and it's charming. 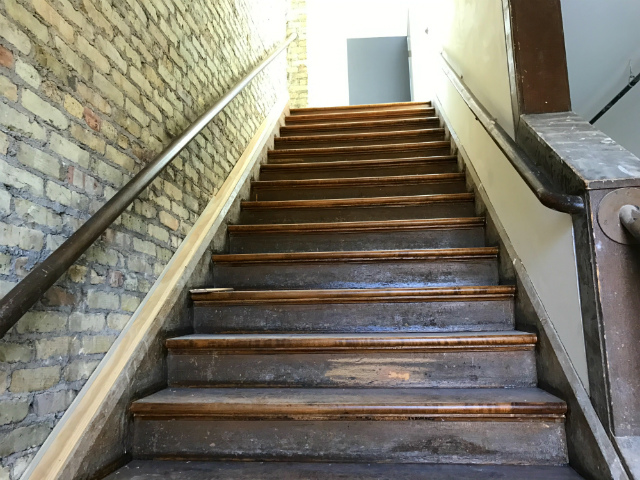 Next, though it's clearly not a hostel nor a B&B, the Kinn will have a welcoming, communal vibe that few larger hotels can boast. While guests will occupy their own traditional hotel rooms, each with a private bath, flat screen TVs, Apple TV and high-speed Wi-Fi, the second floor – where seven of the hotel's eight rooms are located (a larger, handicapped-accessible room is on the first floor) – also has a community space that is pretty unique.

In addition to access to a full kitchen and a washer and dryer, this space, which over looks Kinnickinnic Avenue and the patio below, has comfy seating, a flatscreen TV and a fireplace.

"We've got a little bit of everything for everybody," Bailey says. "People can stay here for an extended period of time and if they don't want to dine every single day they can cook themselves a little breakfast, a little lunch or whatever they choose to do." 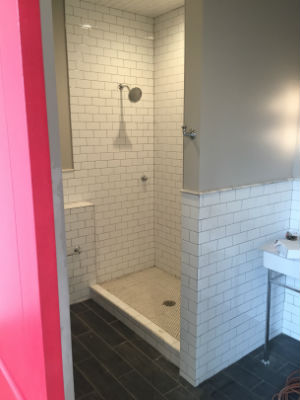 "But we really want to get this feeling of a person leaving what would essentially be their own bedroom in their house and walk down the hallway to their own kitchen. That's how I want this thing to feel. Hopefully we've achieved that."

Bailey smiles at the thought of guests padding down the corridor in their slippers to utilize this community space.

"Increasingly people don't mind living among other people," Bailey says. "I just took it one step further and designed a space for that was specifically for that kind of demographic. We have the bar and restaurant downstairs, if they want to go downstairs for lunch or dinner or a cocktail, they can do that. But if they want to stay up here and just chill ... when's the last time you were at a party and you weren't hanging out in the kitchen? There's something about a kitchen. This to me just felt like home.

"There is a different sort of conversation that might take place in an environment like this as opposed to sitting down next to somebody in a bar. This is like bumping into somebody in your own family room. That, to me, is a really appealing thing."

In the guest rooms

Because the interiors are still incomplete, it's hard to get a full sense of what to expect, but there are clues and they point to a design that feels both modern and classic at the same time – a style (designed by Peabody Interiors, with the guidance of Connie Bailey) that embraces the history of the building.

The rooms have sliding "barn doors" separating the bathrooms, which are finished in sleek white subway tile and with modern fixtures. Tile in the shower areas looks as though it could date to when the building was erected in 1895 as the home to Masonic Lake Lodge (which relocated to Howard Avenue in the 1960s), though it is not old. 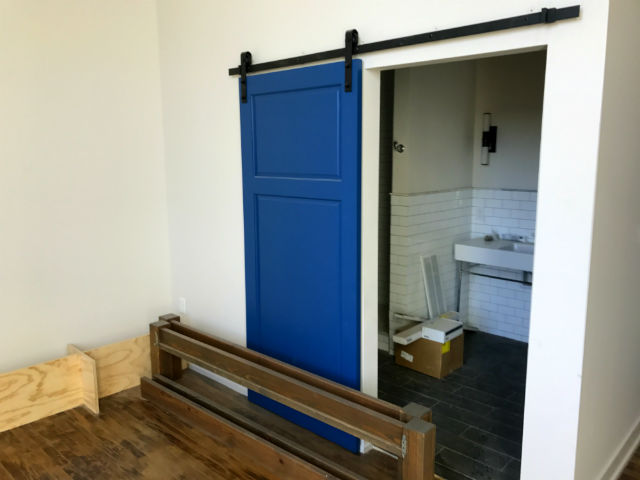 But many of the interior features have always been part of the building's history. The hardwood floors are original, as is the exposed brick on the walls. So are the steel beams down in the restaurant space. And the bed frames themselves were made from wood timbers from inside the building.

"That was really to me one of the most important things about the design," Bailey says. "You can't lose sight of the character of this old building."

Bailey points to a circle of missing hardwood floor in the corridor that was an electrical outlet added at a later date and says he's embracing the imperfections.

The architectural features that really caught my eye were the gigantic windows illuminating each room, as well as the restaurant space and the broad staircase up to the second floor. These flood the building's rooms with light and manage to feel both modern and classic at the same time, reminding you that despite the lovely contemporary appointments and amenities, you're staying in a wonderfully reimagined neighborhood landmark. 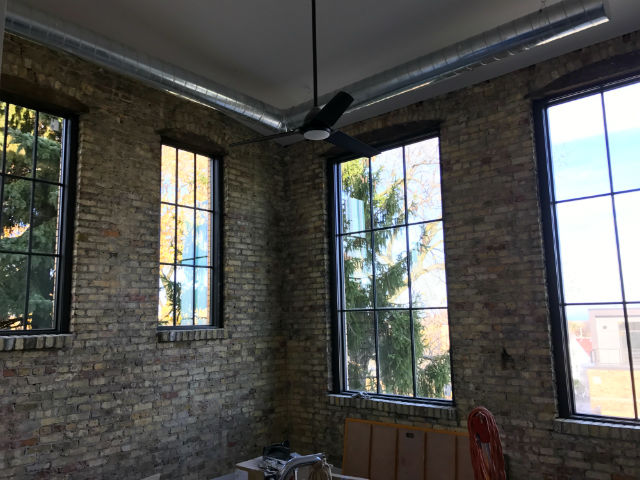 Today in 1906 the Medusa Challenger, a familiar Bay View sight, was launched