It's nobody's business whether I vote

Thanks to my often reluctant participation in our grand democracy by voting in elections, my mailbox has lately been overflowing with brochures from candidates. Most of it is just annoying, but today's mail brought something downright offensive.

Thanks to my often reluctant and grudging participation in our grand democracy by voting in elections, my mailbox has lately been overflowing with brochures from candidates up for various offices on April 5. Most of it is just annoying and worthless, but today’s mail brought something downright offensive. 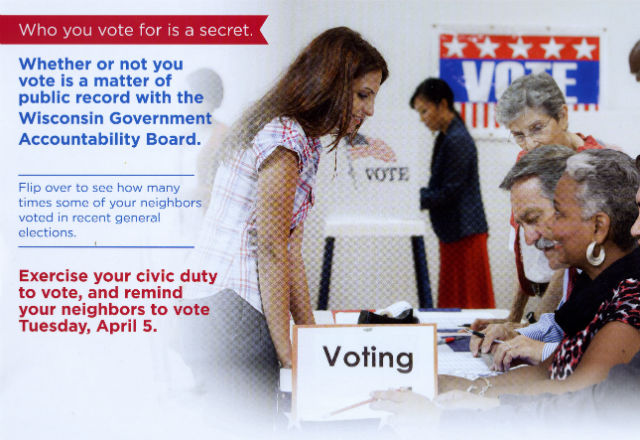 It’s a card from the campaign of County Executive Chris Abele that proclaims on the front:

"Who you vote for is a secret.

"Whether or not you vote is a matter of public record with the Wisconsin Government Accountability Board.

"Flip over to see how many times some of your neighbors voted in recent general elections."

On the back is a chart "derived from actual voter history records from the Government Accountability Board that show whether some of your neighbors vote." My name and address are at the top of a list of eight people from around my neighborhood, with the information that I voted in 2008 and 2012, and in which of those years the rest voted.

Why is this allowed? What gives politicians the right to access voting records and use them to try to shame, cajole or bully people into getting to the polls? Abele’s mailing makes it sound like it’s the Wisconsin Government Accountability Board keeping ominous tabs on us.

I have no objection to allowing candidates for office to buy lists of registered voters, but there ought to be a law against providing anything more than that. It’s none of Chris Abele’s or Ted Cruz’s (he used the same sleazy ploy before the Iowa caucuses) or the Government Accountability Board’s business when and how many times I’ve voted (but since the information is already out there, let me disclose that usually as I am marking my ballot with one hand while the other holds my nose – which will also be the case next Tuesday. Most of the time I end up with writer’s cramp from penciling in my choices).

A politician’s self-serving encomiums for my good citizenship are neither sought nor valued. As for my neighbors, I don’t much care to be upheld as a good example for them except when it comes to minding my own business. Abele’s card urges me to contact them and "encourage them to vote." Some I’d just as soon send on an all-expense-paid vacation right before Election Day to ensure that they don’t.

As Abele’s card says, whom we vote for is a secret.

It should also be one whether we vote at all.

Common Council statement: It's not just about 30 police officers