Industrial buildings with a touch of architectural grace are the perfect shared home, I think, for the Florentine Opera Company and La Lune Collection, a small business carrying on Milwaukee's manufacturing and immigrant traditions.

Looking at the single-story cream city brick building at 930 E. Burleigh St. in Riverwest, one can’t help but wonder at the handsome details in what looks like an industrial office building (though I’ve long been a fan of this genre). 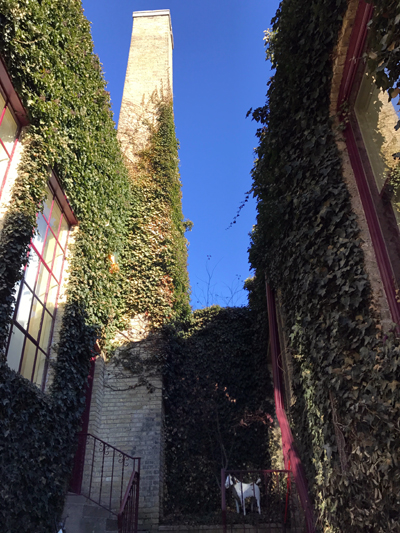 There’s a sturdy and attractive arch over the main entrance and a nice little band of decorative brickwork along the roofline. Connected nowadays by a tiny gated courtyard is another one-story cream city brick building to the west.

Out back, across what looks like a charming gated mews, is a large industrial building, with a matching structure across the alley.

This is the home to the La Lune Collection, and has been since 1986. Owners Mario and Cathy Costantini love these buildings, which they restored and expanded, and they treat them with the kind of care that is surely appreciated by neighbors.

But the reason that office is so nice is likely due in large part to the fact that the contractor that built it was also the owner. H. Schmitt & Son – builders of churches, homes and other structures in town – built 930 E. Burleigh St as its own headquarters. 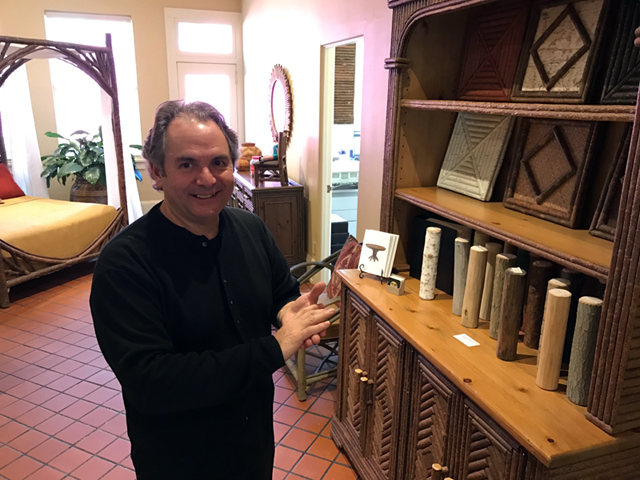 And these guys knew what they were doing. After all, they’re the contractors that built the Tower Theater movie palace on 27th Street, the Wisconsin Gas Light building, St. George’s Melkite Church on 16th and State, the Herman Buemming House on Pleasant Street. 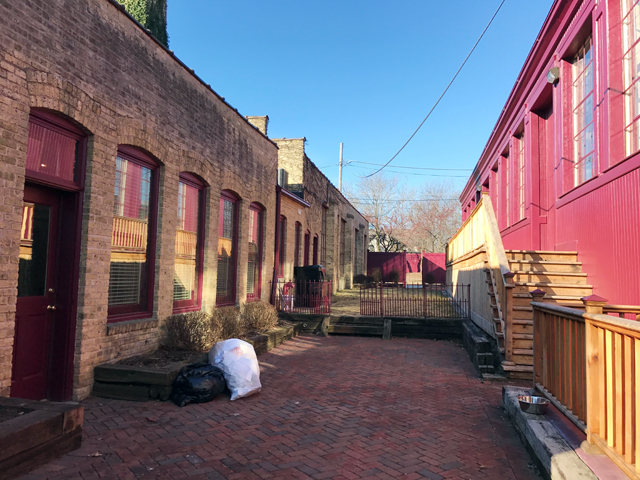 "The people we bought it from told me that they started building here in about 1900," says Mario Costantini. "The company here called H. Schmitt and Son, and they specialized in building churches in Milwaukee.

They used these buildings for their home base, and then of course, they did most of their work, like a contractor would, outside. The building next door used to be their garage. And then the building where our factory is was a millwork plant where they did the woodwork for churches and so on." 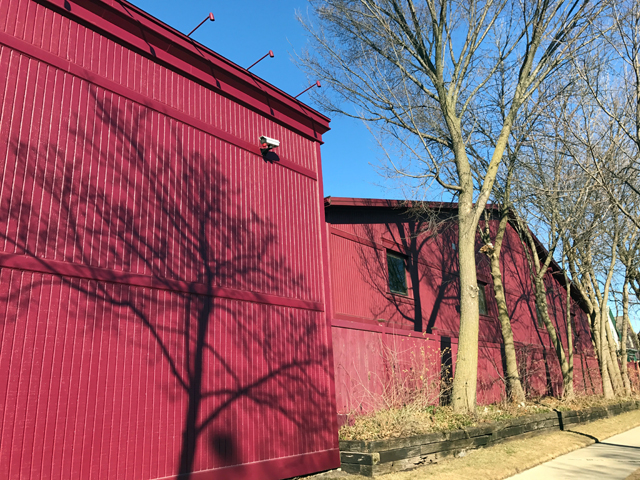 This information contradicts what folks have thought. The Wisconsin Historical Society lists 1900 as the date of construction.

To confirm which date seemed correct, I consulted the Sanborn Fire Insurance Map for 1910 (below), which shows the entire site vacant, which would support the 1925-26 date and negate the idea of a 1900 start date. 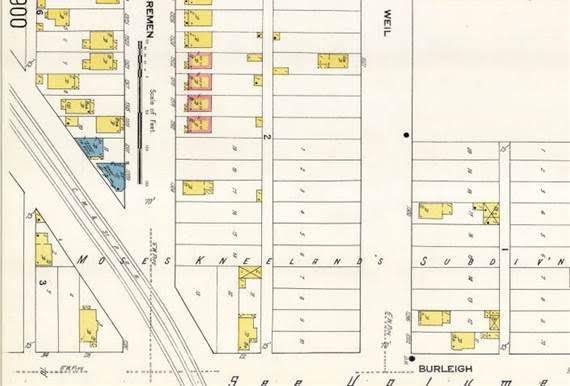 City directories confirm that Schmitt was based on Jackson and Lyon Streets in 1900, on 26th near Townsend Street in 1910 and on Farwell Avenue, between Kenilworth and North in 1920.

In fact, Schmitt moved to Burleigh Street after selling its Farwell Avenue property to Moses Annenberg, who then constructed the Oriental Theatre complex there, tapping Schmitt to do the actual building work.

Either way, there’s no denying the history here at the Burleigh site. The complex was the home to an important local business, one tied to the city’s German heritage.

"They told me that until World War II they hired only Germans to work here," Mario Costantini says. "Then during World War II, they decided the German-only thing was not a good idea anymore. They went out of business in '86."

Then, the Costantinis bought the place and started a new history on this tract in Riverwest. Buying the complex, they moved their then Third Ward-based furniture manufacturing company, La Lune Collection, to the site.

La Lune designs and creates rustic wood furniture, also doing custom work and interior design work for a wide range of clients. One of the oldest – if not THE oldest – is Ralph Lauren, who has been a customer since nearly the company’s launch in 1978.

When the Costantinis bought the complex, the cream city brick buildings were dirty and the shop building out back was exposed block construction. And the neighborhood itself had seen – and would again see – better days.

They cleaned the garage and office building, expanded and re-clad the shop building in considerably more attractive red timber and erected a new storage building across the alley.

They also worked with a number of organizations, including MPD, COA, the Boys & Girls Club, Neighborhood House, ESHAC, philanthropist Jane Pettit and the YMCA to improve the neighborhood, in large part with the creation of a neighborhood youth and health center nearby.

"It was really good," says Mario, who hails from Argentina, but is now an American citizen. "We had wall to wall kids, we felt as though we were really doing some great things with the kids, primarily getting them to graduate from high school and encouraging them to secondary education, not getting pregnant, not getting into drugs. We had great staff, the kids loved the staff, the staff loved the kids, there were just really good relationships."

Though the nature of the partnership has changed over the years, the Holton Youth & Family Center remains active, says Costantini.

"We're running as an independent youth center and we have several partner agencies that we're working with. The second floor is occupied by the Girl Scouts. They're doing a new urban program which is working really well in the city. The lower level is, we have youth programming which is provided by two organizations, Above the Clouds, which is a primarily girl-centric organization."

Back at 930 E. Burleigh, the complex is alive with activity, even when everything seems quiet and, perhaps even deserted, from the outside. 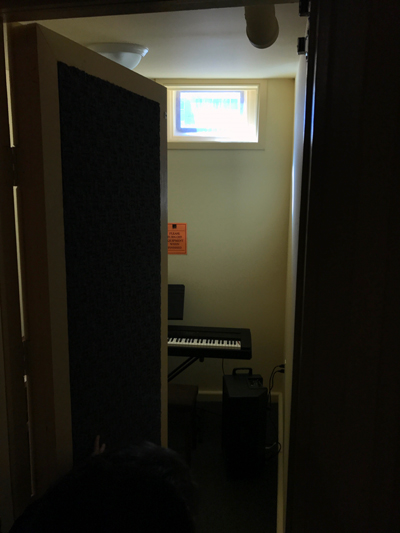 The garage building has been home to the Florentine Opera for nearly a decade now. Here, it has its offices (some of which are also in the lower level of the office building), costume shops, a rehearsal space, private rehearsal rooms (including one in the old coal room, with a former coal chute for a window, pictured at right) and more, where it prepares its productions for staging at the Marcus Center for the Performing Arts.

"Cathy's on the Florentine Opera Board and so for us to have them next door, we couldn't have a better tenant," Mario says. "They're wonderful people that we love. If you were to say to us, ‘Who in the world would be the best tenant you could possibly have next door,’ we would say, ‘the opera.’ So it's fun for us."

Sometimes the Costantinis even sit in on rehearsals to enjoy the music – by Florentine invitation, of course. 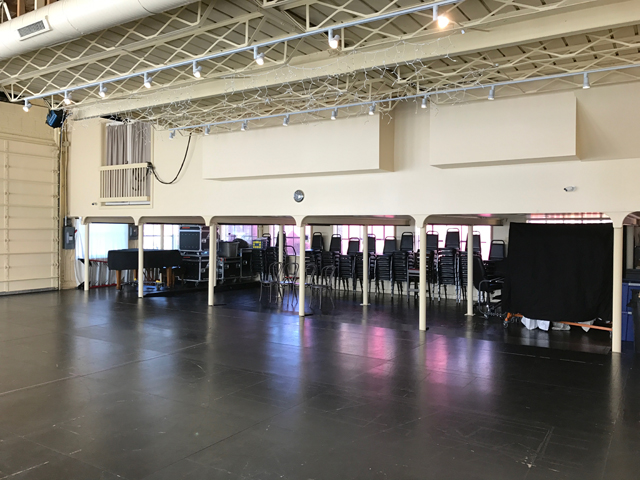 An adjacent home has been renovated into homes and studios for four artists.

"Every square inch (of the complex) is used for something," says Mario. La Lune’s offices and showroom occupy the first floor of the office building and the shop out back is a hive of activity, where workers take raw timber and fashion it into beautiful furniture.

There’s a wood shop, an upholstery shop, a photo studio for catalog images, a shipping area and more. 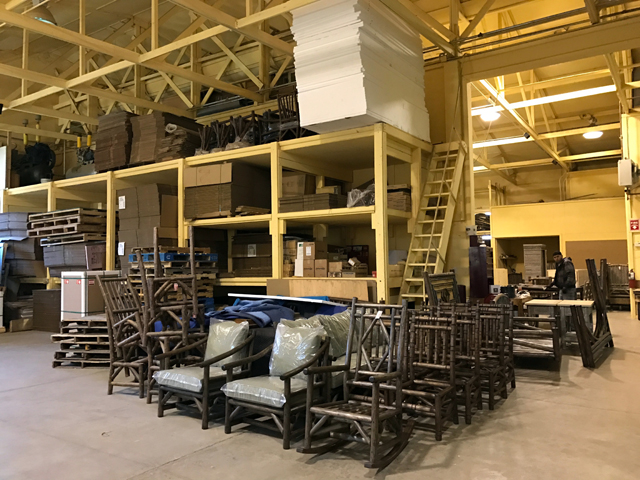 Watching the craftsmen at work – some of them on machines dating back to the earliest days of the Schmitt woodshop on this site – was particularly interesting and I wish I’d had more time to do that. 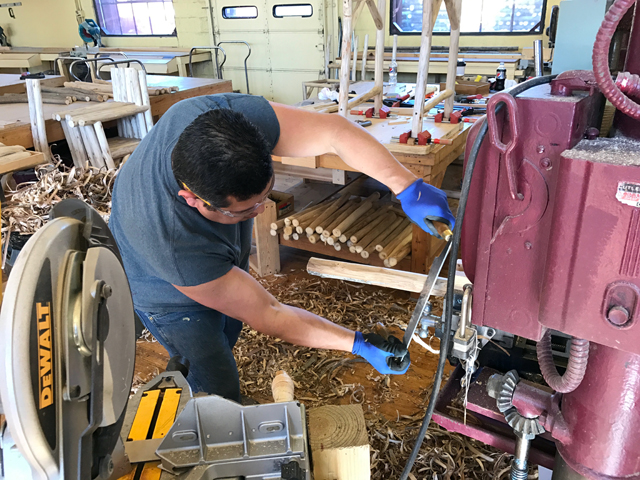 I also enjoyed see the stacks and stacks of different kinds of beautiful wood that were all destined to transformed into something else beautiful. 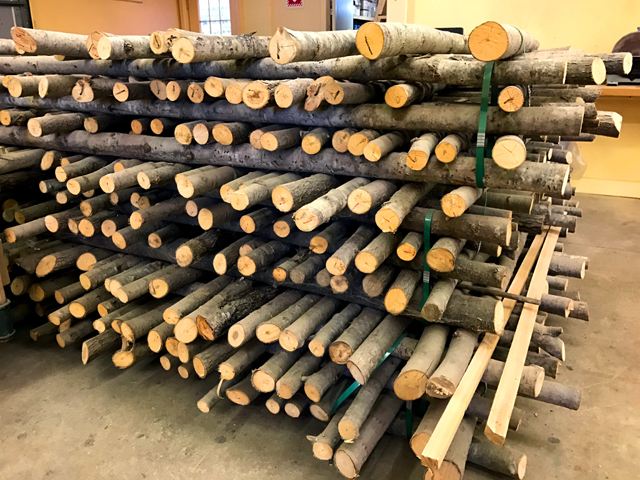 Once, Mario recalls, a former H. Schmitt & Son employee stopped in to see his old workplace. When he toured the factory he told the Costantinis how satisfying it was to see that the buildings were – as in the Schmitt era – still a place where new Americans could get a start.

Industrial buildings with a touch of architectural grace are the perfect shared home, I think, for an opera company and a small business carrying on Milwaukee’s manufacturing and immigrant traditions.