The clock is ticking on Riviera Beach this summer, but it's not too late to get down to Lake Geneva and enjoy what's left of the season.

The clock is ticking on Riviera Beach this summer, but it's not too late to get down to Lake Geneva and enjoy what's left of the season.

Here are some suggestions for how to while away some sweet late-summer and early-autumn days on the shores of Geneva Lake and nearby.

This summer we explored Lake Geneva from two completely different home bases. Earlier in the season, we nabbed a wooded site at the Big Foot Beach State Park campground, 1452 S. Wells St., which is open until mid-October.

The sites and the park are quite nice – though our location backed up onto a private camp which was hosting a large event of some kind, affecting our woodsy serenity. The beach, however, is narrow and runs right along a fairly busy road – but it is still popular – so if you want to catch some rays or romp in the water, see Riviera Beach below. 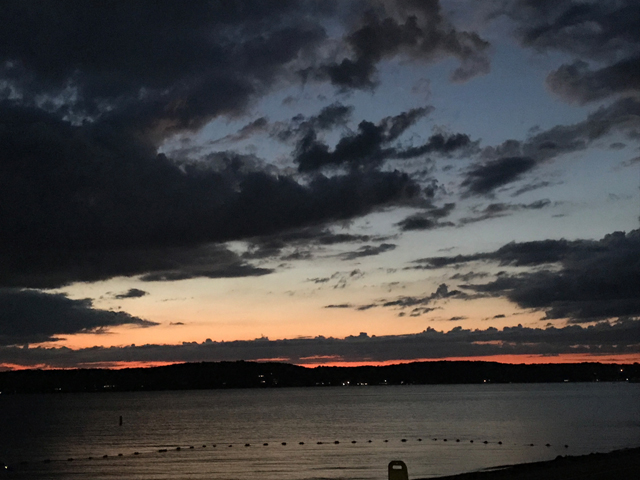 For something completely different, we closed an end-of-summer road trip with a night in a White River Villa at Grand Geneva, 7036 Grand Geneva Way, which was pretty much the opposite end of the spectrum.

From the parking lot, the villas – located a short hop from the main resort building – are rather unassuming. But, opening the door to the two-bedroom private villa led to oohs and aahs, and I think one of my kids may have even gasped. 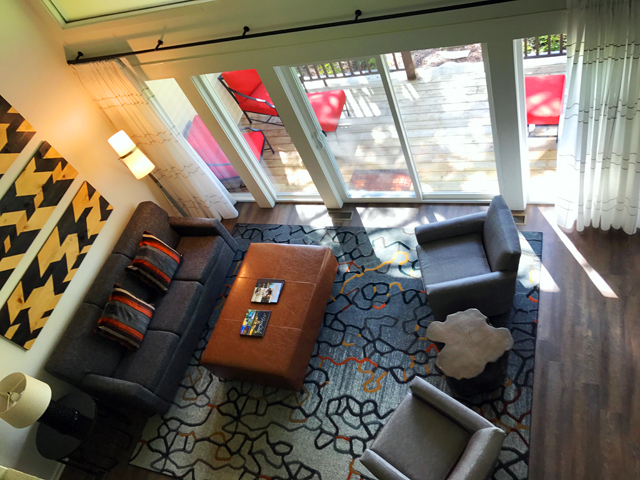 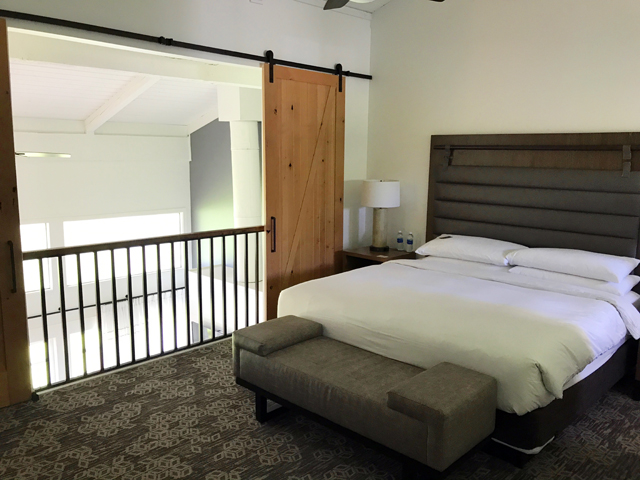 The pet-friendly villa – which we all agreed was nicer than our house – has a lofted master suite with a balcony view over the living room (which has a gas fireplace) and sliding barn doors.

The fully-accessorized kitchen opens to the living room, which is darn near entirely glassed and leads out to a deck and a grassy common space surrounded by the circle of villas. In this area there is a gas fire pit, gas grills and a private pool for villa guests.

As part of the resort fee, villa guests can use the fitness area and other Grand Geneva amenities. We added return visits to the water park and riding stables, creating a smashing coda to our eclipse-chasing road trip. 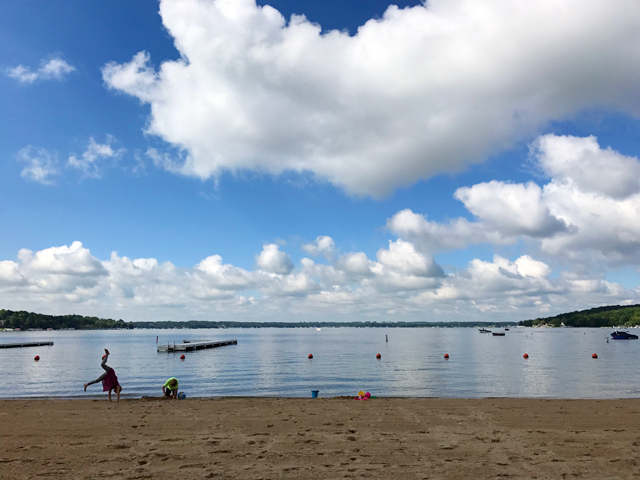 This seasonal municipal beach, 812 Wrigley Dr., right in the heart of Lake Geneva is open daily from 9 until 5, Memorial Day weekend through Labor Day (hurry!!), and it’s a gem. Admission is $7 for adults, $4 for kids 7-12 and free for tots 6 and under, and it’s worth every penny. The beach is clean, and there are lifeguards, showers, bathrooms and snack windows.

Arrive early in the morning and you’ll have your pick of spots (see photos above and below taken from the same spot). But later, it starts to fill up. We scoped out a nice spot and lazed for a while before popping out for lunch and returning to soak up some more rays while the kids frolicked in the water. 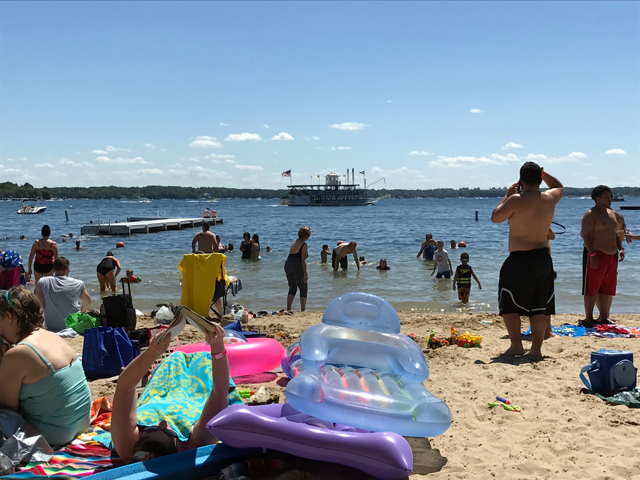 Just outside the fenced-in beach is "The Riviera" building with snack shops, bathrooms, a reception hall upstairs and ticket windows for boat cruises (see below). 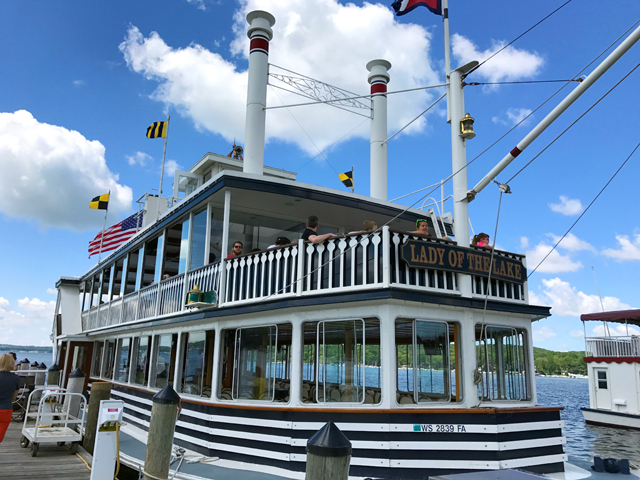 Everyone raves about the mail boat cruise, during which mail carriers leap, often alarmingly on and off the boat to drop mail at docks along the lakeshore, but it’s a fairly long ride and one that kids might get bored on.

We opted instead for Lake Geneva Cruise Line's hour-long Geneva Bay Tour, 812 Wrigley Dr., which showcases a number of the hulking estates built over the past 100-plus years by rich folk – often from Chicago – who enjoyed summering in Wisconsin.

There are other tours, too, all of which can be found here. Tours generally run from late April until early-November, weather permitting.

Get another view of the lake shore and it’s often stunning and nearly always astonishing mansions by walking the public path that circumnavigates the entire lake. 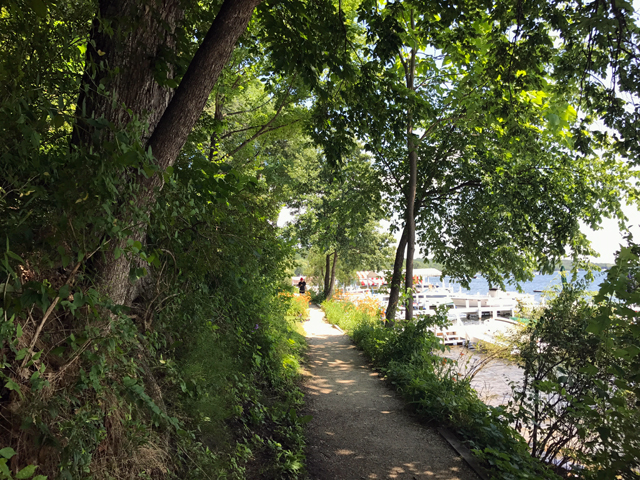 The path is more than 20 miles long and takes a good, long day to walk in its entirety. We found it especially interesting that the path itself changes often with each new adjacent property: sometimes it’s grass, sometimes it’s a boardwalk, sometimes it’s stone pavers. 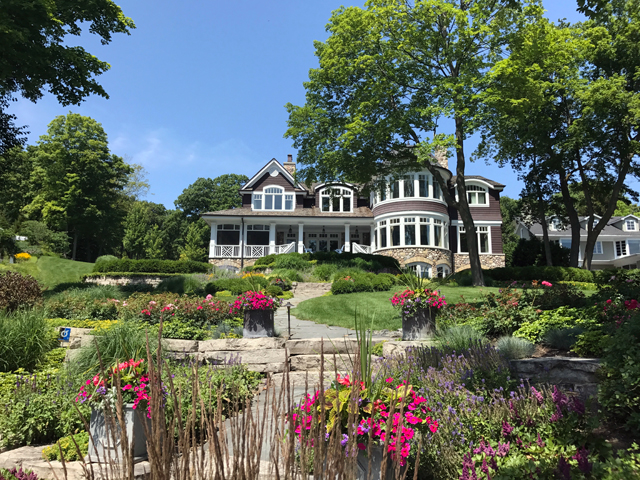 It’s great for gawking at how the other lives (on the houses on one side) and plays (on the docks, decks and boats on the other side), but remember that everything but the path is private property, so please be respectful.

Lake Geneva isn’t the only town on Geneva Lake. Fontana, on the far side, offers a completely different vibe. It’s smaller, quieter, more small-town-ish. This is a great path to start on the path if you’re planning a relatively short walk. Head toward Williams Bay for some great views. 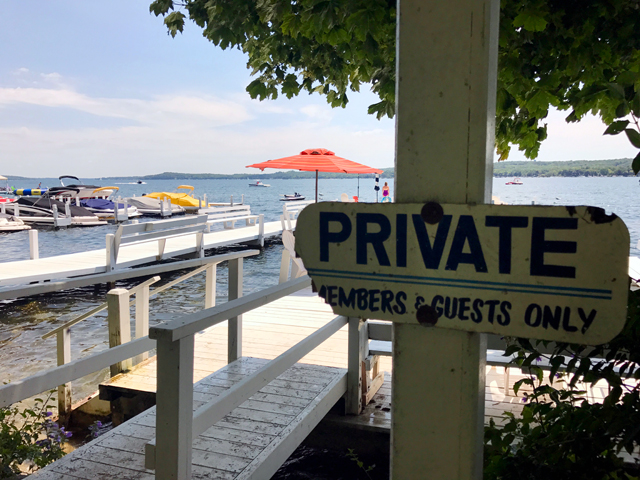 Back in Fontana, perch on a stool at one of the eateries along the lake for a relaxing lunch. Drive back to Lake Geneva via the route to the south, which takes you past farms up on high ground that sometimes offer great vistas.

Soliciting Facebook friends for Lake Geneva's best pizza, nearly everyone suggested the Next Door Pub, out of downtown at 411 Interchange N. (pictured in the next two photos), but on our camping trip we found ourselves face to face with the sleek Oakfire, 831 Wrigley Dr. (pictured in the second set of images below), and couldn't resist the scent of a wood-burning oven and a patio that looks directly over the lake. 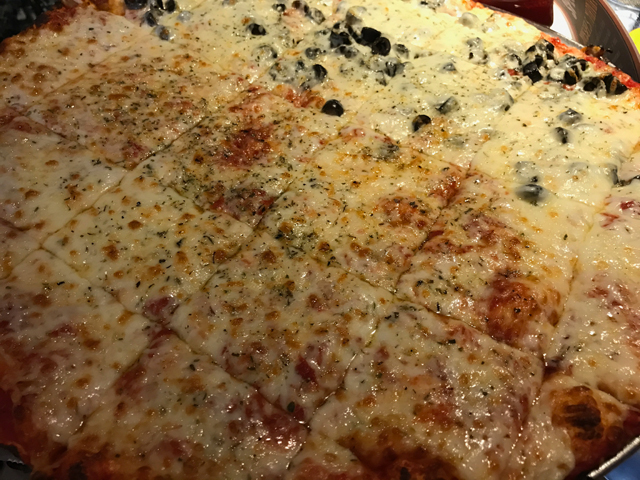 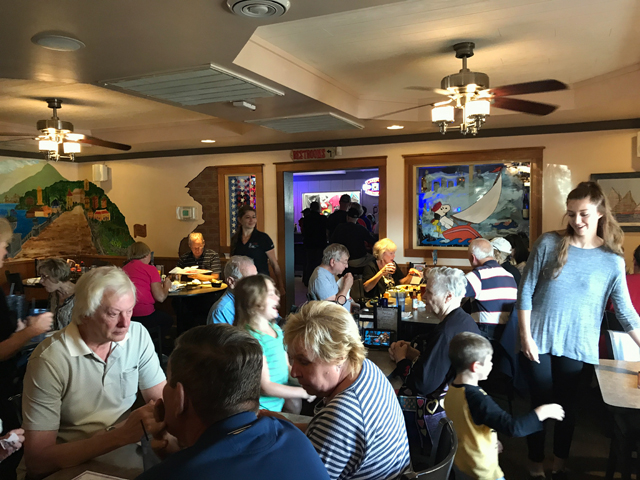 "You never listen," chided one online friend, but we didn't regret the Neapolitan-style pizzas and the al fresco dining on a gorgeous summer day. But when we returned later in the summer, we made a point of checking out the homier Next Door, which serves Italian-American style pizzas with a super-thin crust and tavern-cut squares.

The verdict? Both are solid options, but serve different styles of pizza. Which you choose will depend on your preference, I imagine ... unless you find yourself standing outside Oakfire – which opened in 2015 – on a lovely day, in which case your choice will likely be clear. 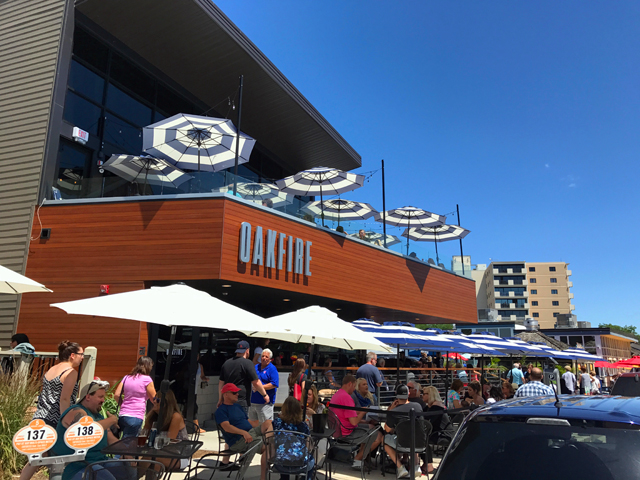 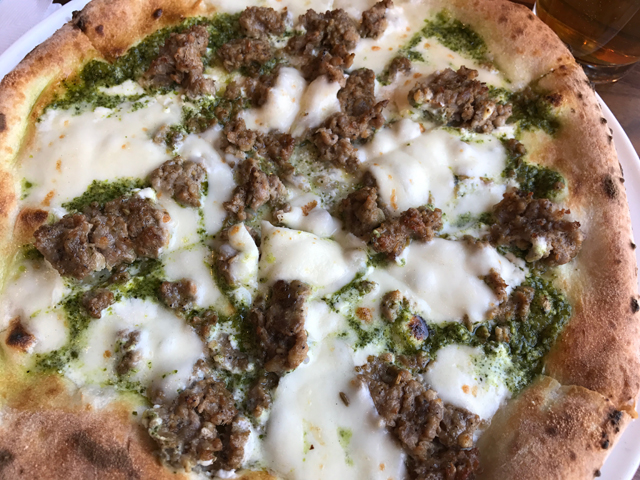 For a similar look at spring family fun in Lake Geneva, click here.