Craft beer lovers have reason to be stoked for their next trip to Summerfest. After all, Lakefront Brewery will once again host the daily firkin tapping at its tent at the Big Gig. You won't want to miss a peek at the unique beers they will be tapping.

Craft beer lovers have a number reasons to be stoked for their next trip to Summerfest.

But that's not all. Every day at 4 p.m., Lakefront staff will be on the Summerfest grounds tapping a firkin of specially brewed beer just for the festival.

Take, for instance, the Double Dry Hopped Simcoe IPA firkin that's slated for opening day. Simcoe hops are known for both exhibiting both fruity (from berries to citrus) and earthy notes that veer in the woodsy direction. It's also been known to produce subtle, sometimes spicy onion and garlic notes. When dry-hopped, it can produce bright orange aromatic notes. So this should be an interesting brew for hops lovers.

And that's just the tip of the iceberg. There are 10 more flavors scheduled (and we have a list of every last one). 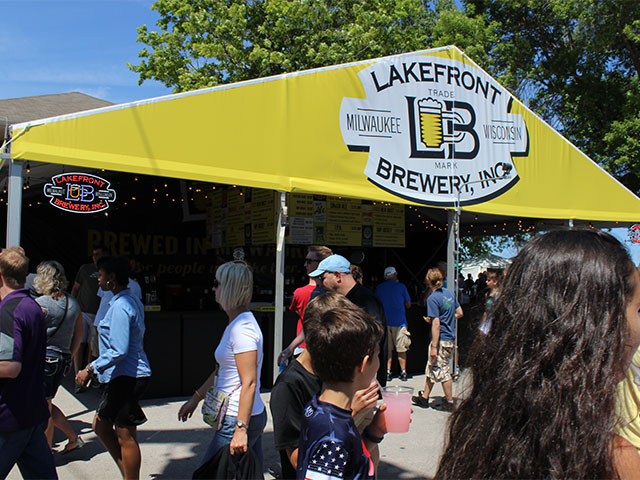 But first, what the firk is a firkin?

If you’re a beer geek, you can probably skip this section. But for those of you who’ve always wondered about the mysterious draw of firkin tappings, here's a quick run-down.

Interestingly enough, the word "firkin" is not a term that’s isolated to beer. In fact, a firkin is actually a small cask that can be used to store a variety of liquids – even salt, butter or fish. However, in the case of beer, it’s a reference to an English unit of volume. More specifically, it’s a small barrel that is one-fourth the size of a regular barrel of beer.

But it gets better. The beer inside that firkin isn’t usually just any old brew. The casks are actually proving grounds, which are often used to experiment with various flavors. Sometimes, as is the case with the Lakefront firkins, the casks are used for secondary fermentation, during which flavors are added to a core brew to create an interesting variation.

Firkins have been used for hundreds of years to produce cask-conditioned beer (sometimes called "real ale"). It's beer that has not been cold-filtered, pasteurized or carbonated through outside means; rather, the beer is naturally carbonated by the fermentation of yeast inside the cask. The presence of active yeast also allows for the development of complex flavors that can’t be present in a pasteurized brew. Of course, as brewing practices changed, forced carbonation via CO2 in kegs became the new norm, making cask-conditioned beer less common.

But, thanks to a resurgence of interest in cask conditioning, firkins are popping up across the nation in larger quantity. And, if you’re a lover of craft beer, you’ll appreciate that beer poured from a firkin often exhibits a deeper, richer color than its non-cask-conditioned brethren. It will also offer up rich notes of hops and malt, since the carbonation levels are lower and don’t interfere with the flavors of the beer.

Curious about the flavors coming down the pike? We've got the complete list of all the firkins being tapped for the duration of the Fest.

Tapped beer will be available daily at 4 p.m., and the beer will be first come, first served. So get there early – and, of course, enjoy.