A brew-tiful afternoon at Lakefront Brewery

Milwaukee's Lakefront Brewery is a great location with interesting beers, delicious food and a charming atmosphere. OnMilwaukee's Zoe Benjamin took her first tour of the brewery and left as a huge fan.

Beer is one thing there’s never a shortage of in Wisconsin. On almost every corner, you’ll find some kind of bar serving up your favorite brews.

One beer seen on tap in most of Milwaukee’s pubs is Riverwest Stein, voted one of Milwaukee’s favorite beer for many years. Not only was this exceptional beer created in the Riverwest neighborhood, but it was created by a pair of ambitious Milwaukee brothers.

Lakefront Brewery began its legendary work in 1987, when company president Russ Klisch got his brother Jim a homebrewing kit after the latter expressed an interest in beer making. The brothers each began concocting their own brews, igniting an innocent sibling rivalry. But that competition led them to begin entering their brews into home brewing competitions, and as the awards stacked up, so did the encouragement to begin their own official business. 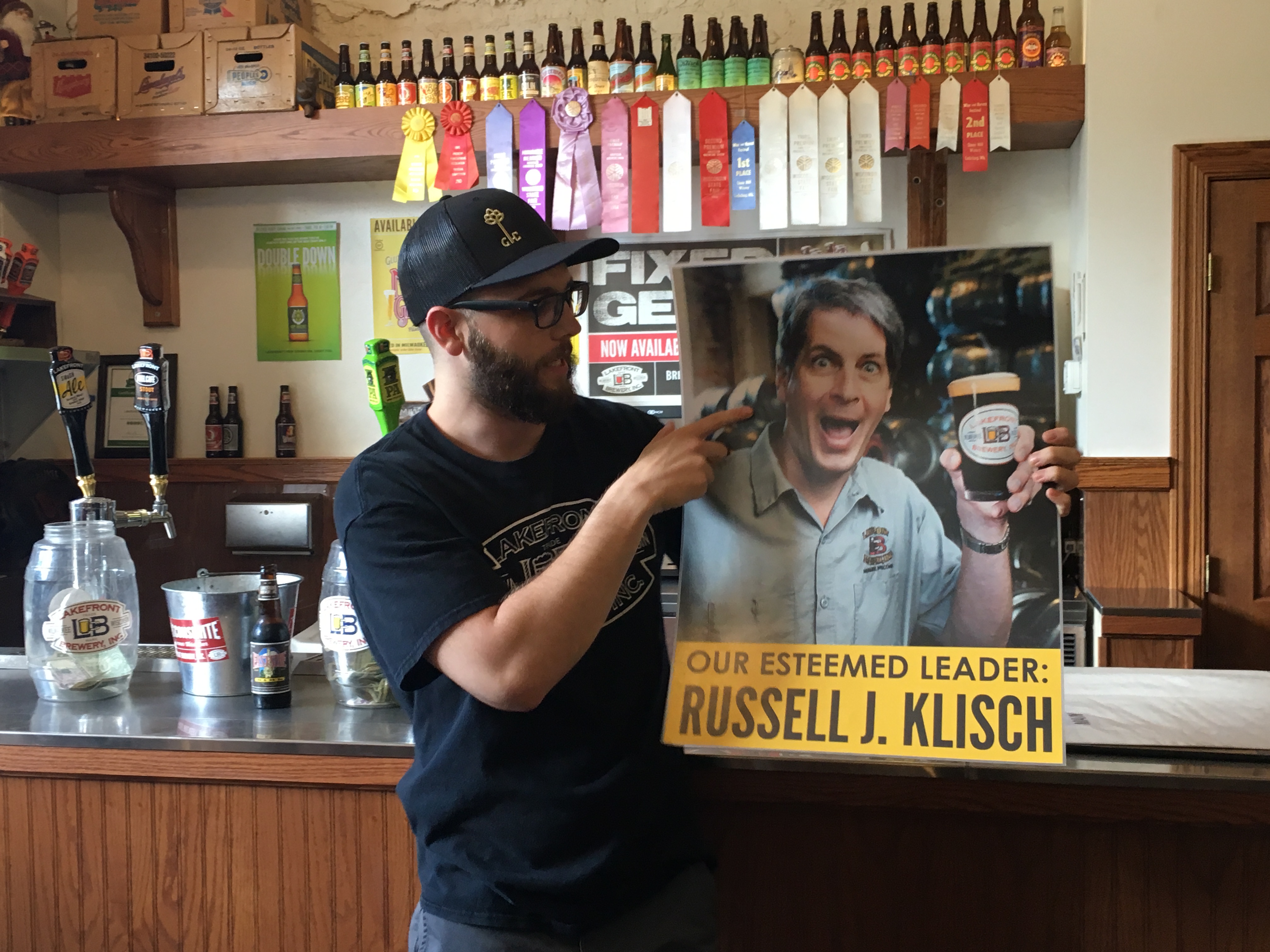 The Klisch brothers started off at a small location on East Chambers Street, but needed a serious space upgrade within ten years. Since 1998, Lakefront has been housed in the previous Milwaukee Electric Railway and Light Company’s location, where the brewery is still located. 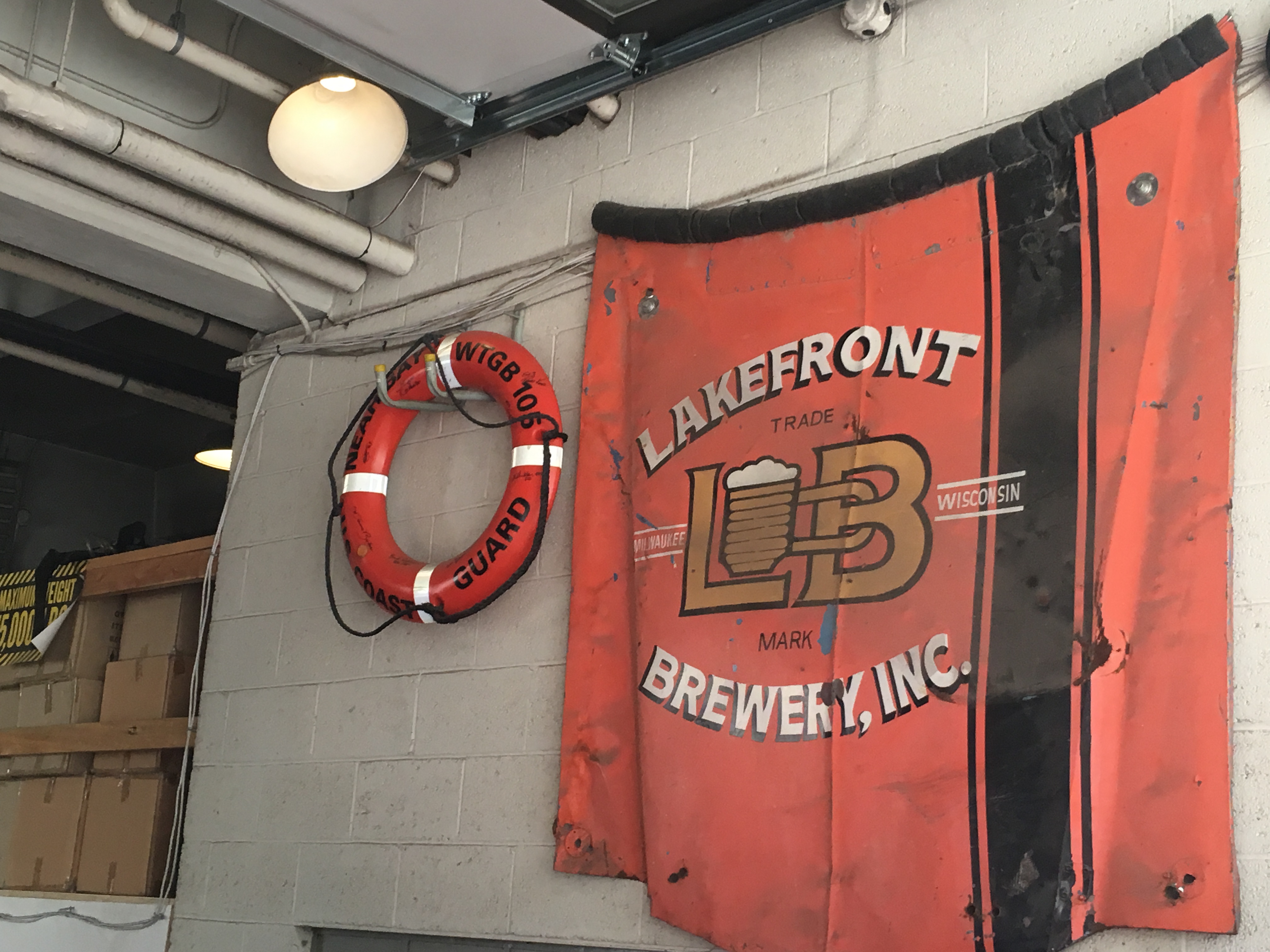 This past Monday, I had the opportunity to go on one of Lakefront Brewery’s lovely tours, courtesy of Visit Milwaukee. Let me tell you, any tour where you can comfortably drink the whole time is the tour for me. I headed into the gift shop to get my tasting cup and my drink tokens.

Each tour provides you with four drink tokens. Four! That means you can be nice and sauced by the end of your visit. I only took advantage of three drink tokens — I was still on the clock, people. My first brew of choice was a classic Riverwest Stein, because you can never go wrong with a Riverwest Stein. 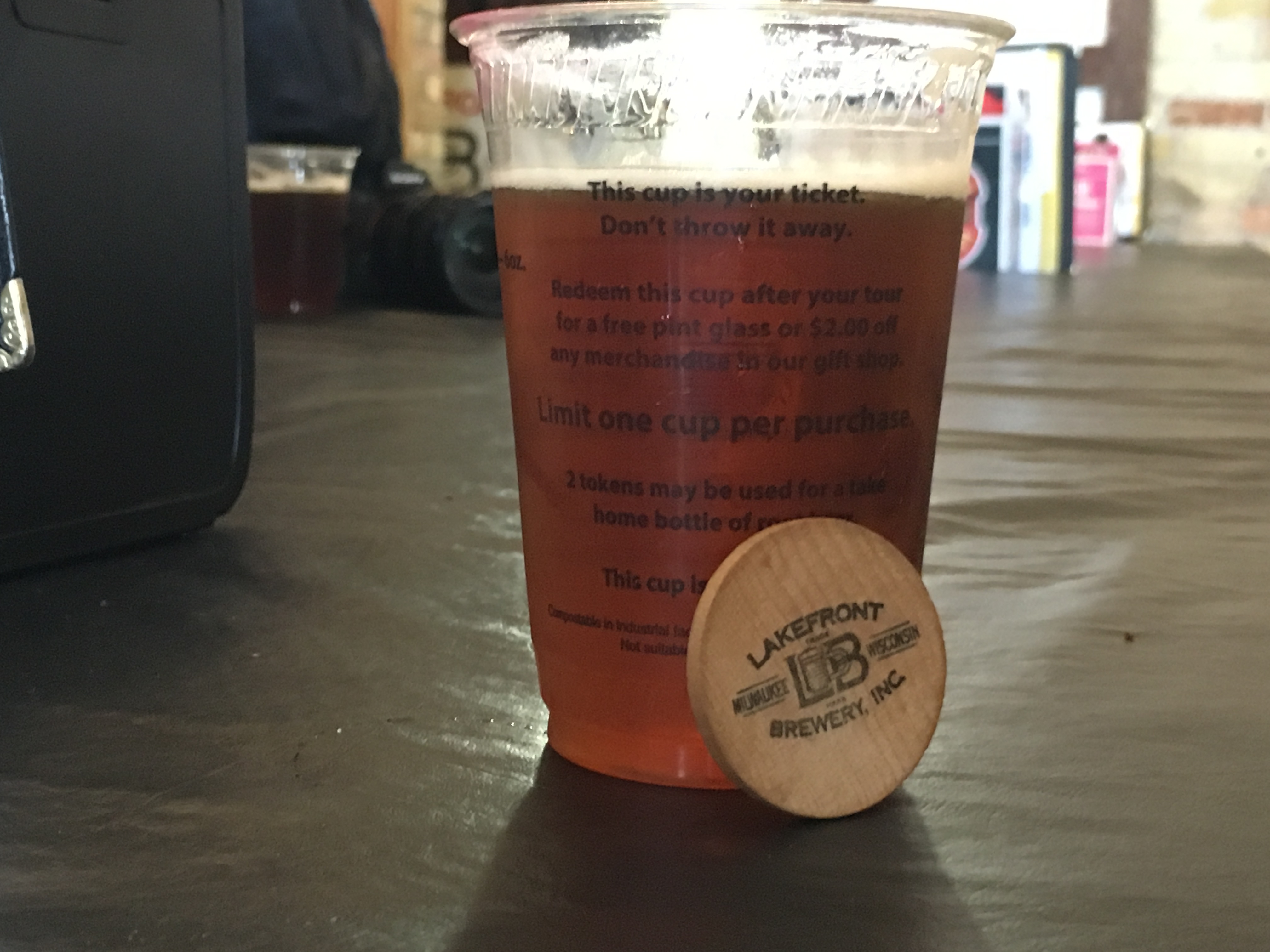 Our tour guide, JD, was waiting for us by an oversized beer mug, the starting point of the tour. JD was a cool guy, and his enthusiasm for beer showed. His presentation was effortless and enjoyable, paired with multiple toasts to keep the guests sipping.

Through this tour, I learned a little bit about the Riverwest neighborhood, how Lakefront Brewery came to be and other interesting facts about beer. For instance, I found out that Lakefront Brewery won the silver medal for best Pilsner in the world! I don’t know about you, but I think that’s kind of a big deal.

After our first bit of information, we were encouraged to fill our cups. My second brew of choice was the Lakefront Growing Power, a farmhouse-style organic pale ale. I was pleasantly surprised by the Growing Power beer because it had a slightly hoppy taste, something I’m not too fond of; nevertheless, this brew’s hops were smooth, not overbearing. I might even go buy a case of the stuff. 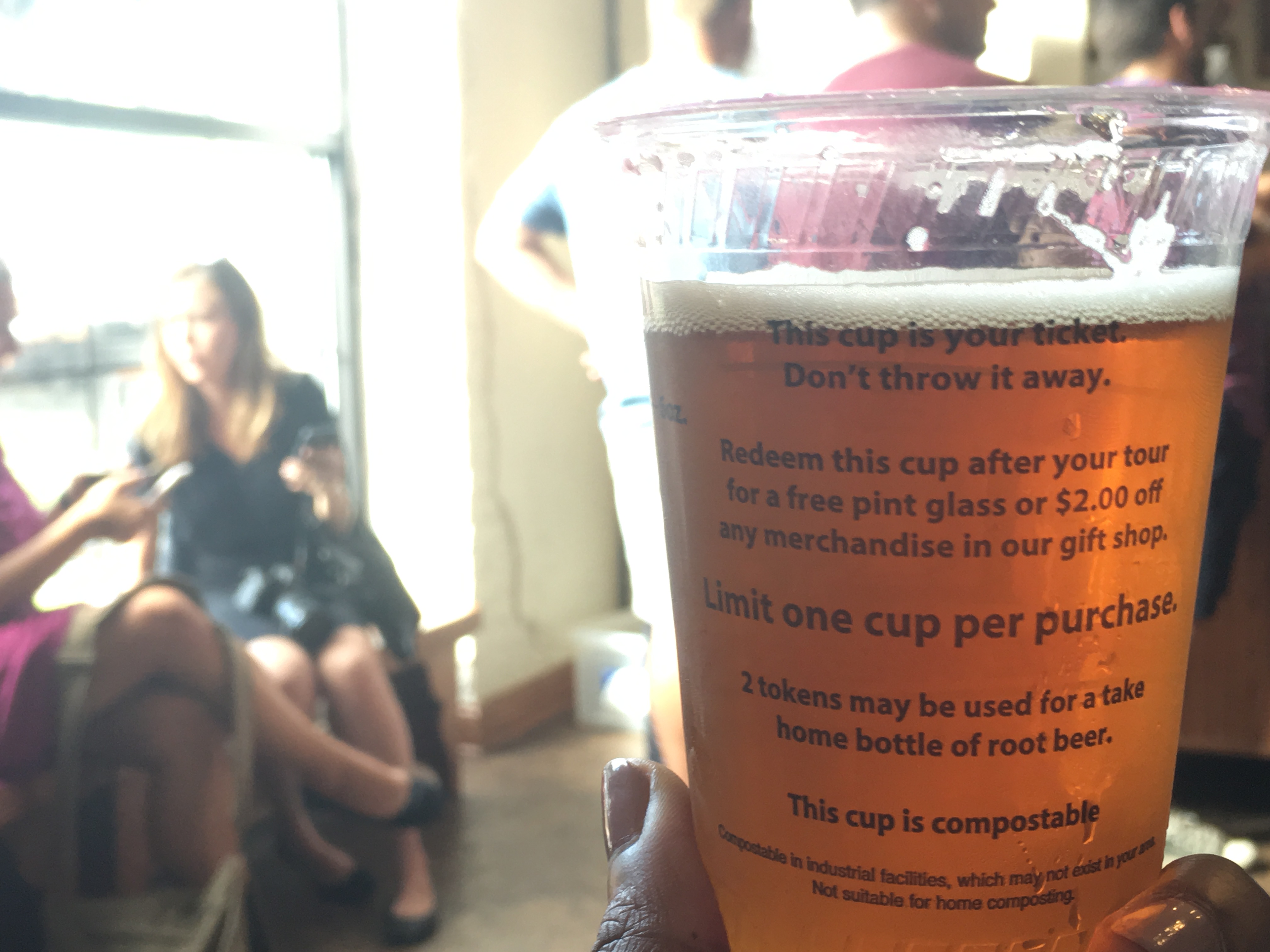 Our second round was followed by a venture down into the legit brew house, where Lakefront produces more than 30,000 barrels of beer per year. Due to high demand, they are building another brew house right next door. It’s safe to say Lakefront Brewery is doing all right. 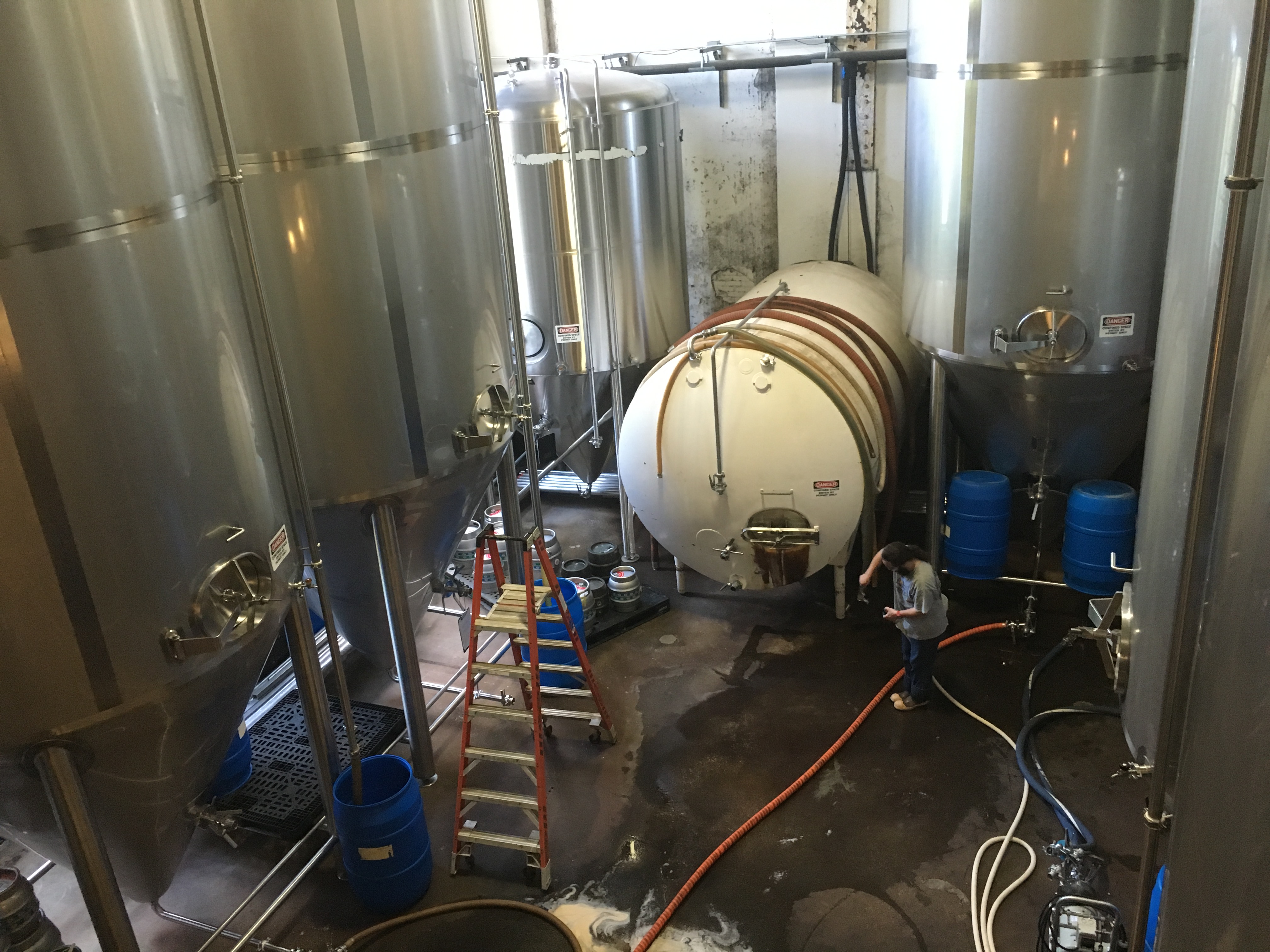 Other interesting features of Lakefront Brewery include the famous Bernie Brewer’s Chalet from County Stadium, a complete restaurant and an absolutely lovely patio along the river.

Seriously guys, this place is like an adult playground. Upon finishing the tour, I knew I had to bring my friends out for a mischievous evening of fun, good brews and Haus Pretzels with beer cheese sauce. Oh, yeah. 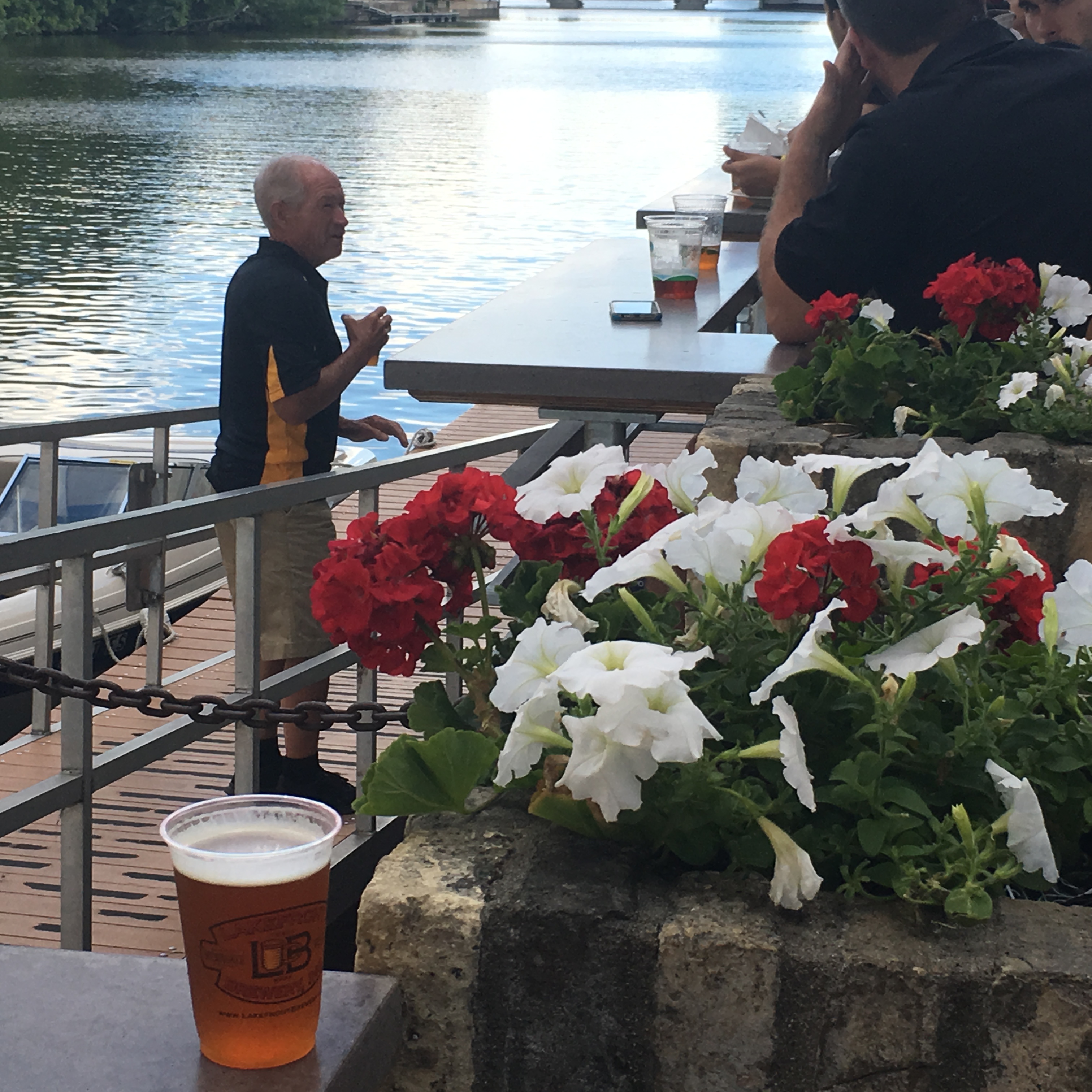 The joy of the shower beer

Here's the schedule for the 2021 Traveling Beer Garden