Get a taste of the Caribbean at Likkle Jamayka, which opens next week

The long-awaited Caribbean restaurant, Likkle Jamayka, will make its debut next week. And Milwaukeeans can expect a casually elegant restaurant, which offers both an authentic taste of Caribbean cuisine and an experience that captures the essence of island culture.

Likkle Jamayka, the long-awaited Caribbean restaurant at 235 S. 2nd St., will open its doors to the public for its first dinner service on Saturday, April 22.

According to owner Adriel McFarlane, Milwaukeeans can expect a casually elegant restaurant, which offers both an authentic taste of Caribbean cuisine and an experience that captures the essence of island culture.

"There has always been a burning passion in me to light a fire like this," says McFarlane, who owns the restaurant with his wife, Kamonti. "And the opportunity presented itself because Milwaukee doesn’t have a Caribbean concept that really fully represents the culture. 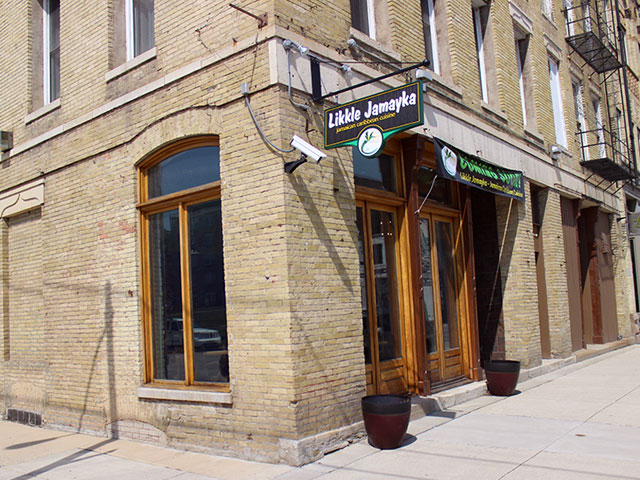 McFarlane, a native of Summer Hill in the St. James Parish of Jamaica, says his passion for food and beverage can be traced back to childhood and his mother's cooking.

"While we were growing up, we got used to her weekend cooking," McFarlane says. "She was good at food in general, but baking was her forte. And she’d sell different baked goods, including bread pudding and Jamaican drops, to friends, family and anyone who was interested."

After studying hospitality in both high school and college, McFarlane says he took a job with the Sandals Group, where he began as an intern in the kitchen, eventually moving into a position in accounting. The experience, he notes, gave him a broad view of the hospitality and restaurant industry, particularly in terms of providing a monetizable, high-quality customer experience.

In 2011, he moved to the United States to work at a resort in Boston; but he and his wife were quickly drawn to Milwaukee to be closer to Kamonti’s family, who live in the area. Once in the Cream City, McFarlane took a job working with the Marcus Corporation at the Intercontinental Hotel.

Walking into the 80-seat restaurant, guests will be greeted by Caribbean and reggae music, an element which both sets the mood and functions as a firm reminder of the experience that lies ahead. Lime green walls perk up the space, assisted by new modern light fixtures and an expanded dining area near the open kitchen. A few tropical prints decorate the walls; but McFarlane says the decor is purposefully spare.

"We won’t be advertising the building," he says. "This is about an experience." 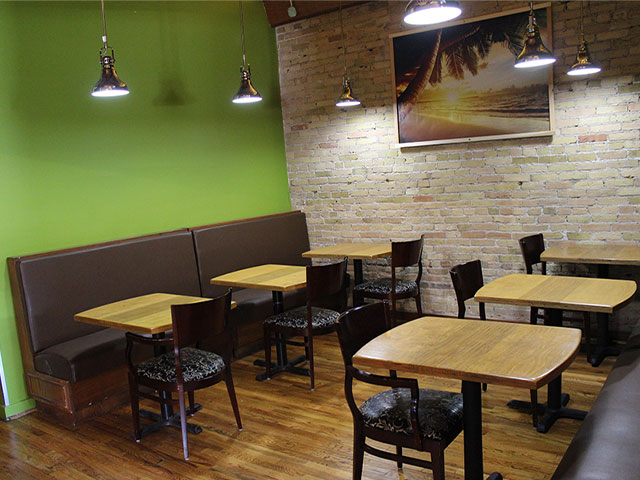 Familiar elements including galvanized zinc and rustic wood accents all carry stories, he says. "They represent the resourcefulness used in the Caribbean," he explains. "Zinc is used for roofing in the cities, and the rustic wood is what so many of the buildings are made from."

Each menu item also tells a story of its own, whether its showcasing that jerk is more technique than flavor, or introducing diners to a new dish or flavor profile.

"The passion of myself and the chef is to make sure there is a wider understanding of what the Carribbean is, and the quality of the food that is part of our heritage," he says.

McFarlane has entrusted the kitchen to Haitian native, Cherven Desauguste, an experienced chef who moved to Milwaukee from Missouri.

"We will make sure that people get an understanding of the Caribbean through their taste buds," McFarlane says of the menu, which will feature lighter fare like a tropical spinach salad, along with five or six appetizers, among them a conch dish called "Jewels of the Bahamas."

Stewed oxtail and jerk shrimp will be featured alongside other traditional dishes like curry and escovitch red snapper, a Caribbean take on South American ceviche made with cooked fish and a vinegar-based marinade. Desserts will include options like pineapple upside-down cake and creme brulee.

Meanwhile the bar will offer wine, beer and a curated selection of Caribbean cocktails. McFarlane says the restaurant will begin with a moderate menu during its first weeks, expanding the selection and adding features including a happy hour starting this summer.