Internet sensation and now world-renowned hip-hop artist Lil Uzi Vert delivered an opening night set to a jam-packed Harley-Davidson Roadhouse crowd on Wednesday. The 23-year-old Philadelphia rapper's brief set lasted less than an hour, but it still delivered on whatever expectations his fans may have had going into it.

Known for dancing around on stage with his shirt off, interacting with the crowd via a call-and-response of the word "aye," and seamlessly moving from one song to another, Lil Uzi Vert delivered exactly that.

While the Harley-Davidson Roadhouse is not the typical venue for a hip-hop artist, Lil Uzi Vert made himself at home, his bass-filled beats and shirtless, almost rockstar-ish look pairing well with the Harley bikes that line the back of the stage. It just worked.

After the Big Bang fireworks show ended around 10 p.m. Lil Uzi Vert took the stage in front of thousands on an opening night that could not have had better weather.

He began with his hit, "Sauce It Up," off his latest album, "Luv Is Rage 2." He was greeted with a roar from the shoulder-to-shoulder crowd so loud it was hard to hear the music.

The crowd sang along loudly as Lil Uzi Vert danced and jumped around the stage and acknowledged the fans with waves. While his energy filled the atmosphere, Lil Uzi Vert had a smile on his face that was almost as big as the crowd.

He kept rolling from song into song, including "Money Longer" off the 2016 album, "Lil Uzi Vert Versus The World," and the parade of hits limited the his audience interaction throughout the show. 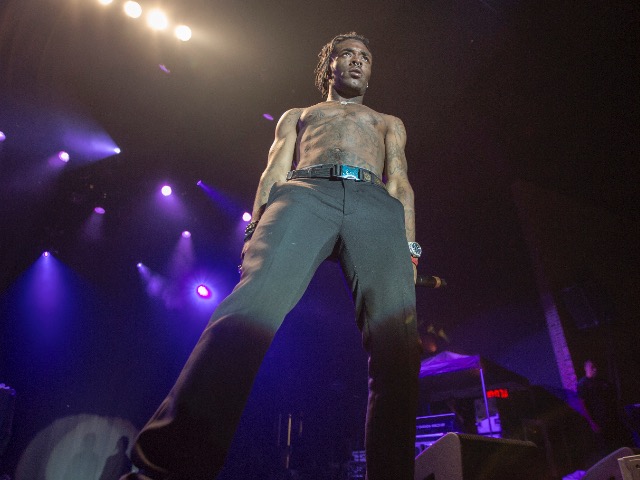 When he did speak to the crowd briefly between songs, it was often difficult to hear what Lil Uzi Vert was saying.


Lil Uzi Vert did thank his fans for sticking by him during his rise to fame. He also paid his respects to recently deceased Florida rapper XXXtentacion by playing his hit single, "Look At Me."

Other than that, however, there was not much more engagement, which made for a show that felt too rehearsed. As though it is the same exact show he puts on wherever he goes.

Although Lil Uzi Vert managed to pack many of his songs into the 50-minute show, the show felt too short, like he was rushing to get off stage.

While he never stopped delivering his hit songs and dancing around, about halfway through the show, Lil Uzi Vert’s smile disappeared and he seemed to become annoyed with the DJ. At one point, he even stopped rapping, peeled his setlist off the stage, took it to the DJ and put it down in front of him as he told him in the microphone to "stop skipping songs."

Despite the fast-paced and somewhat choppy set, it was clear the crowd was trying to make the best of the situation. And while a mild feud seemed to be brewing between Lil Uzi Vert and the DJ, all was right again when his biggest hit began to play: "XO TOUR Llif3."

As if the crowd was not already loud enough, and admittedly out of control at times, as well, everyone at the Roadhouse was singing along to the song.

Towards the end of the show, Lil Uzi Vert actually told the DJ to play "XO TOUR Llif3" again as he threw his microphone into the audience and let the crowd sing the song.

After the serenade from the fans, Lil Uzi Vert disappeared off stage without saying a word. It was hard to tell if that signified the end of the show due to the fact that the DJ was still playing music and hyping the crowd.

The DJ appeared confused too. Eventually after a few minutes of waiting to see if Lil Uzi Vert was coming back on stage, the DJ cut the music and began to awkwardly pack up.

With the interactions and mentions of Milwaukee or Summerfest being pretty much nonexistent, it was clear that the audience was somewhat confused, as well. But they also seemed to be satisfied with being able to see Lil Uzi Vert.

The packed crowd came to see him dancing around with his shirt off and they did. They came to hear "XO TOUR Llif3" and they got it. The audience came to see the internet sensation, and now global rapper in the flesh and experience what it is like to be in his presence, and they did.

However, any expectations of getting a show personalized to Milwaukee and the world’s largest music festival were not met. The lack of mention of the venue and location from Lil Uzi Vert gave off the impression that he may not have been sure he entirely knew where he was or just how big of a deal Summerfest actually is.

The crowd got the experience of seeing Lil Uzi Vert and seeing him act the way he does in person. Other than that, not much else was experienced in the short, choppy and sometimes awkward show. Nonetheless, it seemed like most fans were satisfied with simply seeing Lil Uzi Vert.