Urban spelunking: The "other" Lion House

When I say "lion house," I bet you think of the lovely 1855 Edward Diederich House on the lower East Side. I'm thinking, however, of the lion house, also known as George Koch house, 3209 W. Highland Ave., which shares a number of features with its elder brother.

When I say "lion house," I bet you think of the lovely 1851 Edward Diedrichs House at 1241 N. Franklin Pl. on the lower East Side, attributed to important early Milwaukee architects George W. Mygatt and Leonard A. Schmidtner.

I’m thinking, however, of the West Side lion house, also known as the George Koch house at 3209 W. Highland Blvd., which shares a number of features with its significantly more elder brother. 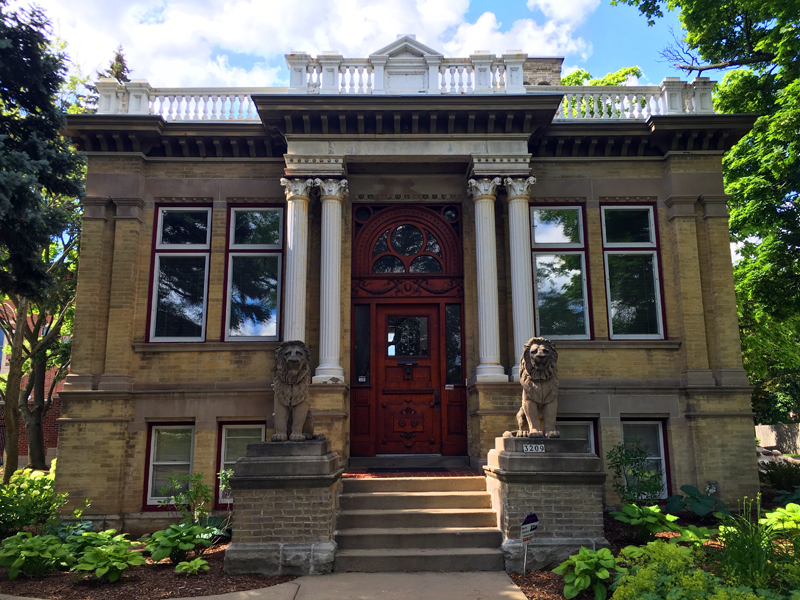 Erected in 1897 to plans by architect Edward V. Koch (it appears architect and client were not related), the West Side lion house was also a one-story cream city brick home with a skylit roof (the East Side Diedrichs House got a second floor in 1895).

Also, both buildings now serve as office space. The Koch house is home to the Potawatomi Foundation and Spotted Eagle, Inc., which provides employment services to Native Americans in need. Both, however, will soon move and the Forest County Potawatomi will seek new office tenants for the space. 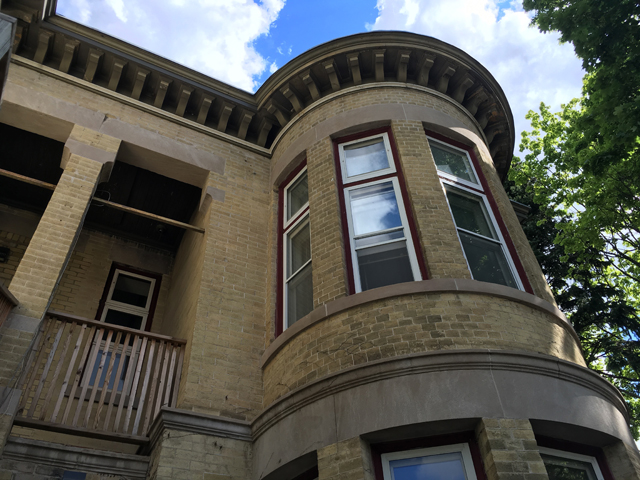 The rear of the house.

The small, symmetrical Beaux Arts home has a stately and elaborate wooden entrance door that is topped with a fan light and flanked by two sets of double Corinthian columns, in front of which sit a pair of lions.

There’s a sturdy limestone foundation and other attractive details. When it was built, it had a monitor roof to supply light to the middle of the building. For an example of what that would’ve looked like, check out the other lion house. 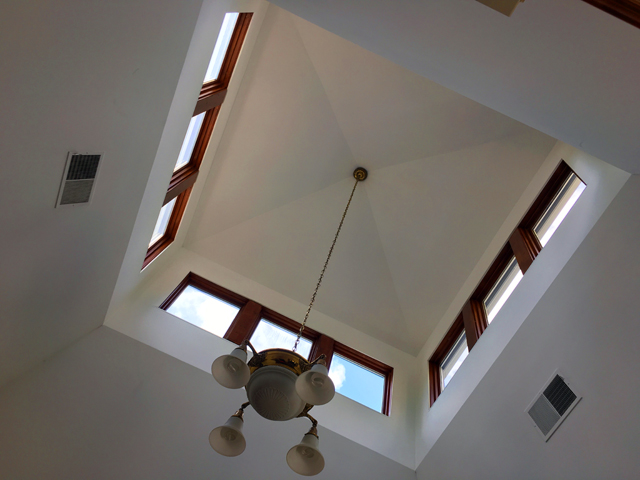 The monitor roof from inside.

The small building, which has a distinctive balustrade outlining the roof, looks like the kind of building you might find housing a quirky little museum on a college campus. But it was built as a home for George Koch, who worked as a cashier at the West Side Bank (headquartered in what Milwaukee would later call the Sydney Hih building on 3rd and Juneau), and his wife Amelia.

Koch was born in Milwaukee in 1863 and worked at Frankfurth Hardware and Manufacturers Bank before joining the Merchants and Exchange Bank at its 3rd and Juneau branch. That institution later became the West Side Bank and Koch worked there until he died in 1922. 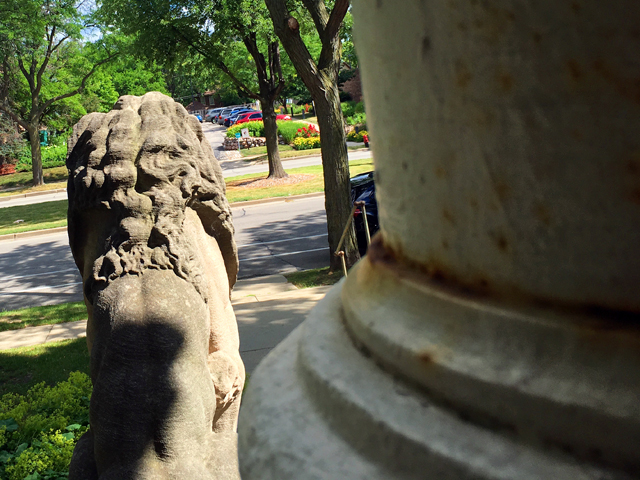 The view from behind the lion.

A member of the West Side Turners, the Wisconsin Club and the Calumet Club, it’s no surprise he decided on a home on Highland Boulevard when he married Detroit’s Amelia Millenbach in 1896. His neighbors would be his club brothers and associates, who had names like Usinger, Pabst and Vogel.

By 1944, the home was under new ownership and had been carved up into five apartments, and it later was purchased by Concordia College. Westside Conservation Corp., a nonprofit housing group that bought and renovated many historic homes in Concordia, owned it and restored it after the fire, and it now belongs to the Potawatomi, who also own the nearby former Concordia campus.

According to a city report, renovations were begun but abandoned before completion in the late 1970s or early ‘80s and in May 1984 a fire damaged the building’s interior, which has been completely remodeled since. 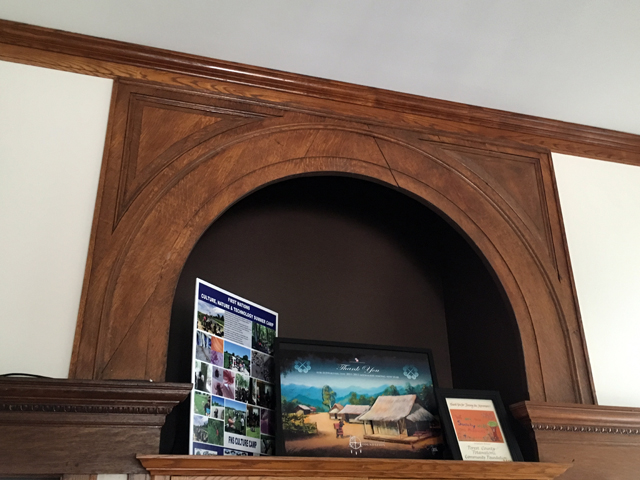 The day after the fire, newspapers pointed to arson as the suspected cause of the blaze, which started mid-morning in a "rubbish pile" in the building, which was vacant at the time. The fire caused an estimated $20,000 in damage, burning through the roof, but sparing the outer walls. 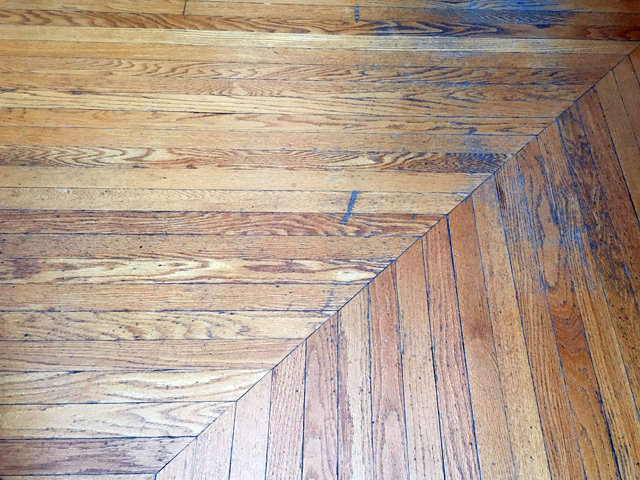 The hardwood floor in the main room.

When you enter, there’s a big open room in the center, lit by the skylight that replaced the monitor roof after the fire. Around the outside of the square space – which has a uniquely laid hardwood floor – are small offices. Straight back is a long, narrow opening down into the lower level, which may have been the site of a staircase. 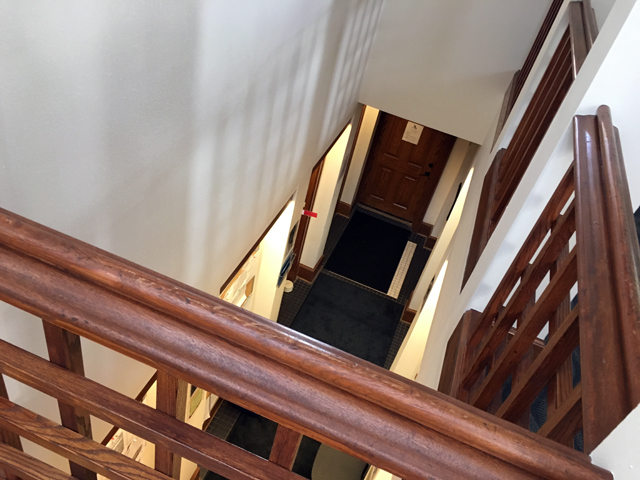 There may have been a staircase here. No photos or original plans were found to confirm this, however.

Now a small staircase is tucked into the corner to the right of the main entrance. In the opposite corner is a room with original built-ins, ornamented wooden shelves and a window bay.

Downstairs, the basement has also been converted to offices that are well-endowed with natural light thanks to copious above-grade windows in what Russell Zimmermann calls a "high English basement."

Zimmermann notes that even before the fire, "remodelings ... concealed the original main room which once rose to the roof and had stenciled designs in its skylight well."

These days there are precious few details beyond a bit of woodwork here and there. 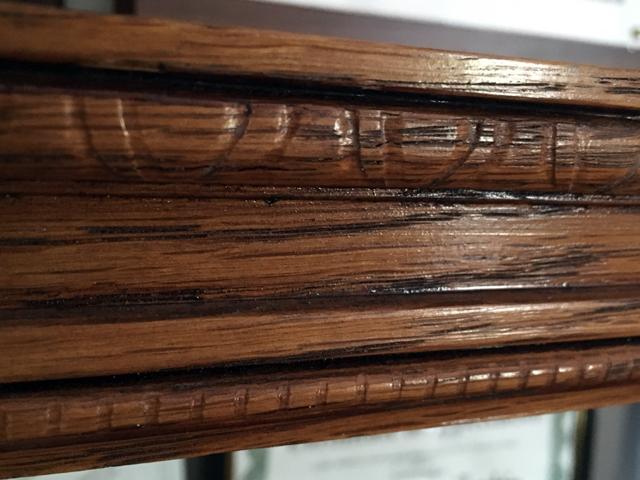 A shelf edge in one of the rooms is carved with detail.

What’s most striking about the place is how modest it is, especially considering its once very desirable location and its elaborate and high-falutin’ exterior.