Cut the crap! How can we all help clean up our city's highway shoulders?

There seems to be no end to all the development activities taking place around Milwaukee. But I've got one small thing that everybody can do that will go a long way toward making Milwaukee more attractive. Let's pick up the litter on our expressways.

There seems to be no end to all the development activities taking place around Milwaukee.

A new arena, apartment buildings within a stone’s throw of each other, condominiums, one new restaurant after another. All these big things that are making our city a great place to live.

But I have one small thing that everyone can do to make our beautiful city even better: Let's all stop throwing crap out of our cars.

Driving around this city the past couple of days I was astounded at the amount of trash lining the expressways. Forget for a moment about regular streets or parks or any of that. Just think about the expressways. Here’s some of the stuff I saw on on the shoulders on both the North and South sides of the city.

Think of the people coming to Milwaukee, driving into town, and seeing these mini-piles of junk. Not great for our image.

I tried to find out who was responsible for keeping the expressways clean. Like most things in government, the answer is not a simple one.

On the surface, Milwaukee County is responsible for keeping the expressways in good shape – plowing, mowing grass, fixing guardrails, repairing other problems and picking up litter.

However, Milwaukee County doesn’t have money of its own to get these jobs done. Instead, the State of Wisconsin pays Milwaukee for the work.

"The state contracts with every county in order to do this work," said Brian Dranzik, the Director of the Milwaukee County Department of Transportation. "In our case, the state contract calls for one litter removal a year. They don’t pay for any more than that."

Danzik said the state gives Milwaukee County $14 million a year for the maintenance agreement.  That might seem like a lot of money to most of us, but Dranzik said the money is sufficient for only those services called for in the agreement, which is one litter pickup a year.

"We normally schedule the litter removal when the last snowfall is gone, about the end of March, and the ground has thawed enough for us to get the job done," Dranzik said. "The litter accumulates and we only get one chance to get rid of it. If we need to clean it again, we have to go back to the state and it’s not easy to get them to fund another pickup."

Given the parameters of funding and weather and manpower and all the other problems that government always points to for not being able to do simple stuff – like picking up trash – it’s highly possible Dranzik’s hands are tied. He and his department are probably doing all they can to keep the expressways clean. He said he has even asked the state to OK an earlier additional pickup. When he drives his car, he sees the litter and wants to clean it up too.

So, we need to find some other solutions to the sore eye that greets visitors who drive in – say from the airport to Downtown – and happen to glance right or left, only to be greeted by the sight of all this trash. 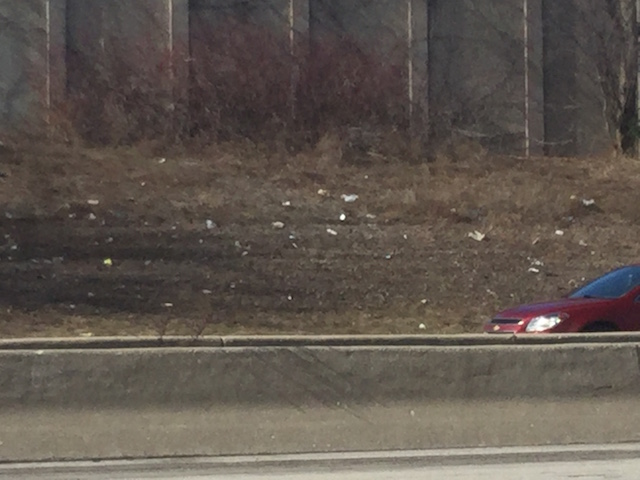 One messy shoulder between the airport and downtown.

One solution is to have everybody be just a little more careful and aware of the mess they are creating.

"A lot of the litter comes from garbage trucks," Dranzik said. "Private companies. I see litter flying out of them all the time. Pickup trucks, too. Private entrepreneurs. They don’t have their trucks covered."

Sheriff David Clarke’s deputies patrol the expressways and his office gave me the following statement:

"There is no specific statute on the books requiring a dump truck to cover any loads they may carry. However, they are not allowed to spill that load on any roadway, which includes blowing, leaking, dropping any material. Citations are issued in those instances when deputies see or are called about that."

Looking at the expressways is an indication that not too many instances of blowing, leaking or dropping of any material are noticed. Cars drive right by the trash on the south side of Milwaukee. What’s to do?

Here’s an idea. If you are driving on the expressway and see a truck with crap flying out of it, pull up and get the license plate. Report it to someone –a boss, a sheriff, the guy’s wife. Whoever. This is why we have cell phones. Call 911. Also shake your fist at him.

We also should all take a long look in the mirror and ask if we ever throw stuff on the ground. I know that on occasion I have. No transistor radios, but I’ve thrown paper out my car window. If your answer is yes, tell yourself to stop it.

And finally, I’ve got an idea to resurrect the dormant program to use inmates to man work crews and pick up the trash. Many cities do this, including Charlotte, NC, where I’ve spent a lot of time. Drive around and you see dozens and dozens of red-clad inmates armed with trash bags, keeping the city and its roadsides clean.

We used to do this in Milwaukee but the practice stopped when County Executive Chris Abele yanked control of the House of Correction away from Clarke.  The program just withered, and Abele has used inmates to clean up some parks.

On Tuesday, there were about 2,000 inmates at the House of Correction and the county jail Downtown. That’s a lot of people who could be used for this task. Some of them obviously wouldn’t qualify because they may have escaped before. But the bulk of them could probably get some fresh air and help pay that "debt to society" by making the city cleaner.

I suppose money is an issue, but at least we wouldn't have to pay the workers. I'd bet that if you asked the inmates, they'd say they would much rather be out in the sun picking up litter than be stuck in a smelly jail.

I know this isn’t the biggest deal in the world and I suppose it pales in comparison to a new arena or a new convention center or a huge hotel or office building. But let us all remember John Wesley, a pastor who, along with his brother, delivered a sermon on a Sunday morning in 1778. Wesley was a founder of Methodism, but it doesn’t make much difference how you worship.

As Wesley announced then from his pulpit, "cleanliness is next to godliness."