Lately, I've been writing about a lot of famous Milwaukee buildings. Everyone knows City Hall and St. Josaphat and The Pabst Theater - important structures, one and all. That work got me thinking about how looking at the city's big landmarks has also opened my eyes to its little landmarks.

Lately, I’ve been writing about a lot of famous Milwaukee buildings. Everyone knows City Hall and St. Josaphat and The Pabst Theater – important structures, one and all.

That work got me thinking about how looking at the city’s big landmarks has also opened my eyes to its little landmarks. More than ever, on my daily commute (a route which has at least six legs on the average day), I notice storefronts and houses and schools and other structures and if you do, too, then you know that we all have our little favorites.

The illustrated list that follows are some of my favorite "little" places in Milwaukee (I’ve easily got another 10 in the hopper), in no particular order.

You will likely recognize some of them, maybe others won’t seem as familiar, but you’ll certainly see why they never fail to catch my eye regardless of the countless times I’ve seen them. 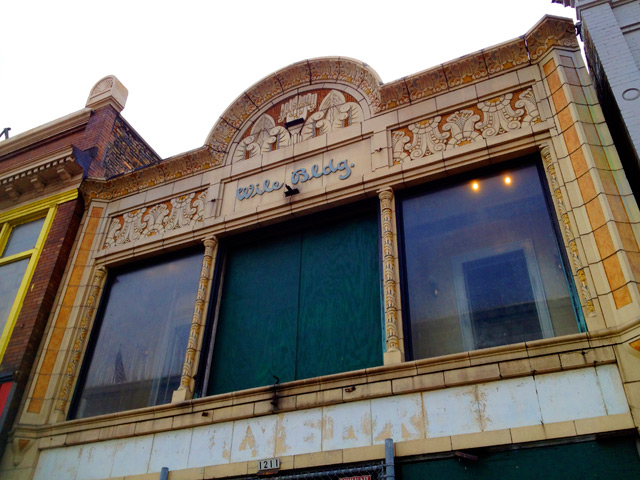 The Wisconsin Architecture and History Inventory calls this gorgeous two-story storefront, "Probably the best preserved example in Milwaukee of the use of stock terra cotta tiles with Art Deco motifs to decorate a small store." Built in 1922, the structure long housed a furniture store and appears to be vacant at the moment. The cream-colored terra cotta – designed Hugo V. Miller and added in 1928 – is highly ornate, with yellow and rust-colored highlights, and "Wile Bldg." written is grey script. Alas, I have been unable to determine the architect responsible. 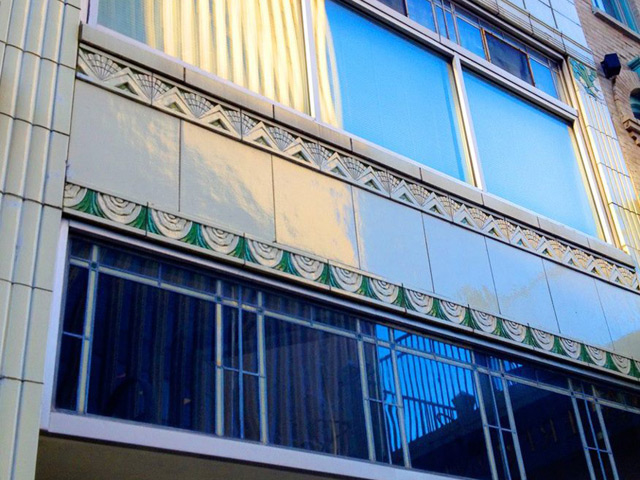 Like the Wile Building, the former home of the Dean Jensen Gallery wears a stunning cream-colored terra cotta facade, but this one – built in 1913 – has green highlights and a more geometric design. As is also the case with the Wile Building, I haven’t been able to find the name of the architect for this great building that is part of a row of historic storefronts on Water, between Mason and Wells, that I recall was threatened in the 1980s. There had been talk of demolishing the entire block and after some hue and cry, of demolishing all but the facades and building a parking structure behind them. Hopefully, whoever suggested that was subsequently run out of town. 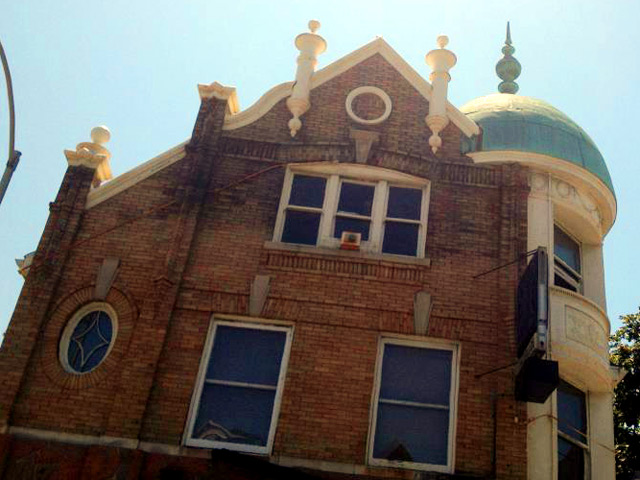 According to "Sherman Park: A Legacy of Diversity in Milwaukee," by author Paul Geenen, The Interlude opened across from the southeast corner of Washington Park in 1981 as, "a gathering place for Sherman Park residents and their kids. Kids enjoyed playing the arcade games and eating nachos while parents drank beer with their friends and discussed community issues." This striking copper domed and spired German Renaissance Revival was built in 1907 to house August Haberer’s corner saloon. 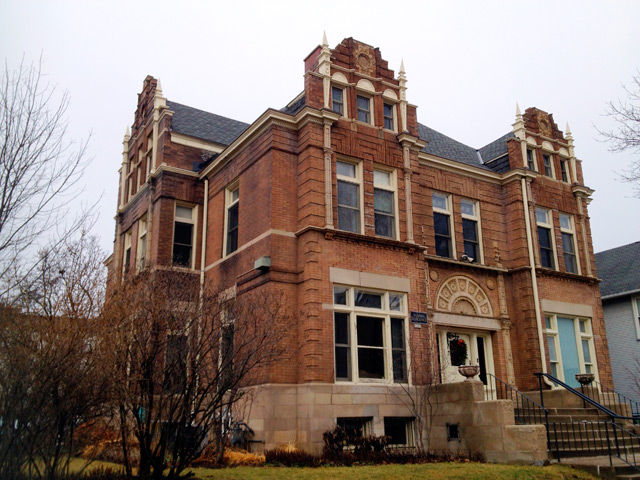 Currently home to the Petawa Residence, student housing and cultural center for Christian women, this German Renaissance Revival mansion was built in 1895 as a home for John Barth, a Milwaukee luggage manufacturer. His family built a cottage that stood at 1315 N. Van Buren for years (it had been moved there from Milwaukee Street and Wisconsin Avenue), and was for a time considered the oldest house in the city. This much less modest abode has spires that recall The Interlude, a Belgian gable on the north elevation and matching stepped dormers. 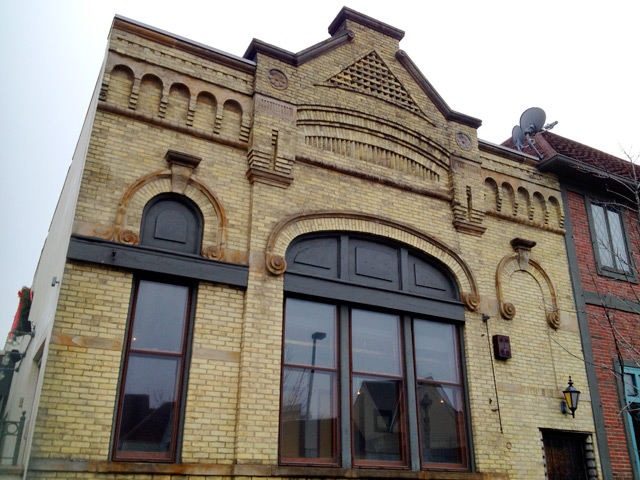 Because it has long since become a part of a complex of buildings that share a single address, I’ve had trouble finding out much about this building that fronted Jackson Street (now the driveway into the East Pointe shopping center). Best I can tell, it was erected in 1878, and over the years has been home to Mother Heiser’s restaurant, The Ogden Cafe, John Ernst Cafe (which bought the buildings in 1938) and most recently, Chipotle. I love the elaborate and varied decorations executed in cream city brick. 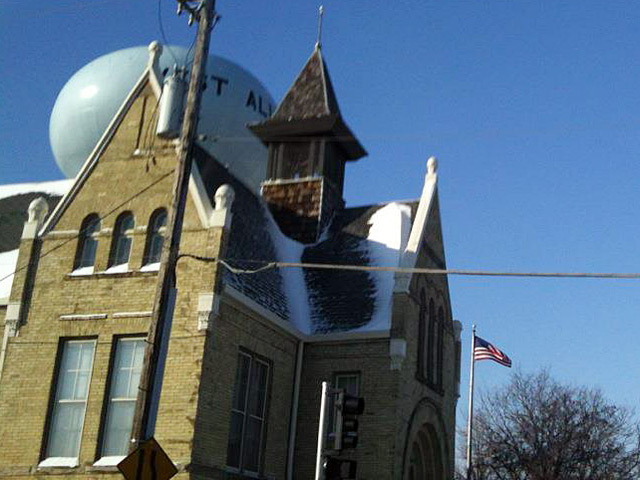 This wouldn’t be complete without a school, would it? I always enjoy driving past Herman P. Schnetzky’s former Garfield (and Greenfield) School, which is now home to the West Allis Historical Society. It’s got it’s old bell tower and the great Romanesque details that can be seen on Schnetzky’s MPS buildings (Fifth Street, Maryland Avenue, the now razed Walnut Street School). Best of all, you can go inside, where the classrooms, stairwells and hallway are wonderfully preserved. 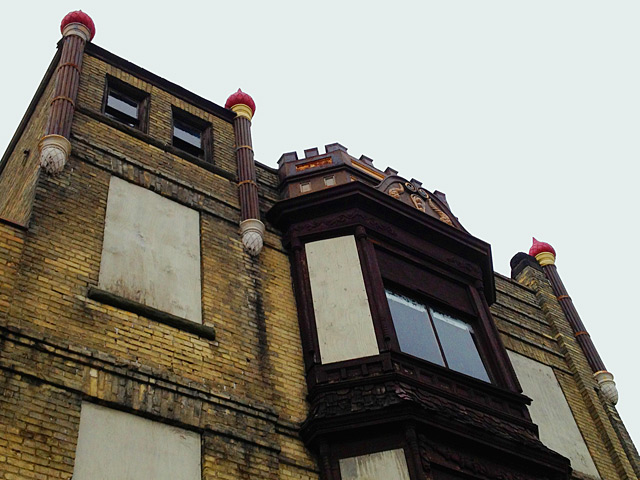 This is one I owe to one of my kids, who saw it from the car one day and said, "look at the flames on that building." Of course, I did a double take, thinking the place was on fire. That’s because architect Charles Kirchhoff, Jr., decorated this 1889 structure with unusual candle-like flame decoration – painted red, of course. The building is currently vacant and owned by the city. The Common Council has given it historic status. 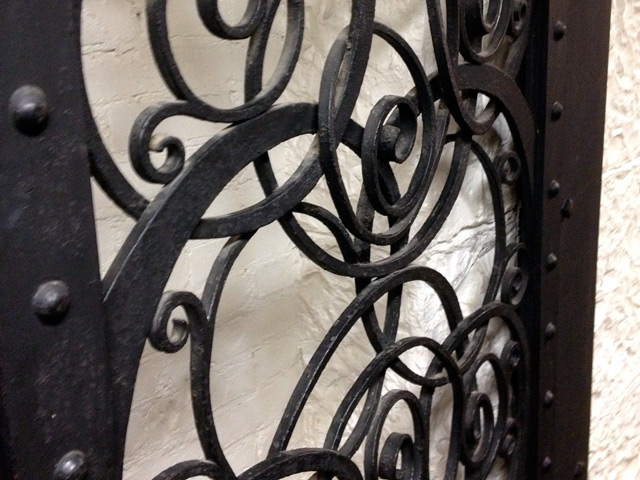 I’ve written about the Tiffany windows in this Edward Townsend Mix masterwork on the lower East Side. But, I love the wrought iron gates in the basement, that may or may not be the work of Cyril Colnik (I’m still trying to determine that). They appear to be in something of a weird location, though it’s possible that they were moved there at some point for "storage." The church has undergone many changes and expansions over the years, so perhaps it’s more likely that while the these intertwined curlicues look oddly sited now, their location once made perfect sense. Though they are quite heavy, the gates’ looping design creates an airy feel that gives these weighty gates a feeling of lightness. 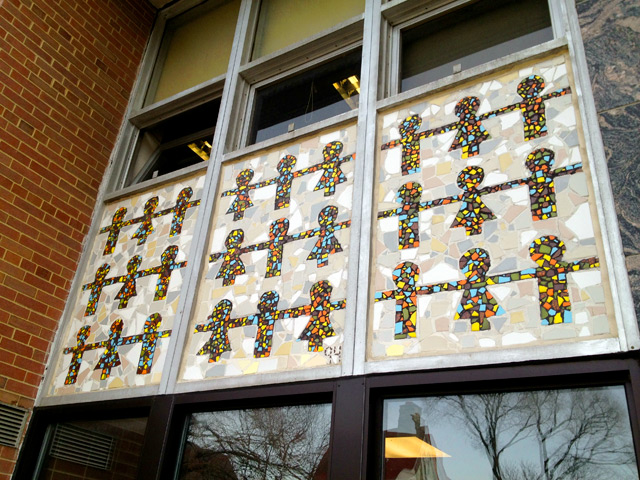 Though I’ve come to appreciate the school buildings built immediately post-war, I’m less a fan of buildings like these erected in the late ‘50s and later. They’re boxy, devoid of detail and their facades often lack character. That’s why it’s a joy to stroll up to the main entrance at Carver Academy and see this variegated tile mosaic that not only adds a dash of color and youthful energy to a drab building, but also celebrates the diversity that exists in the city. 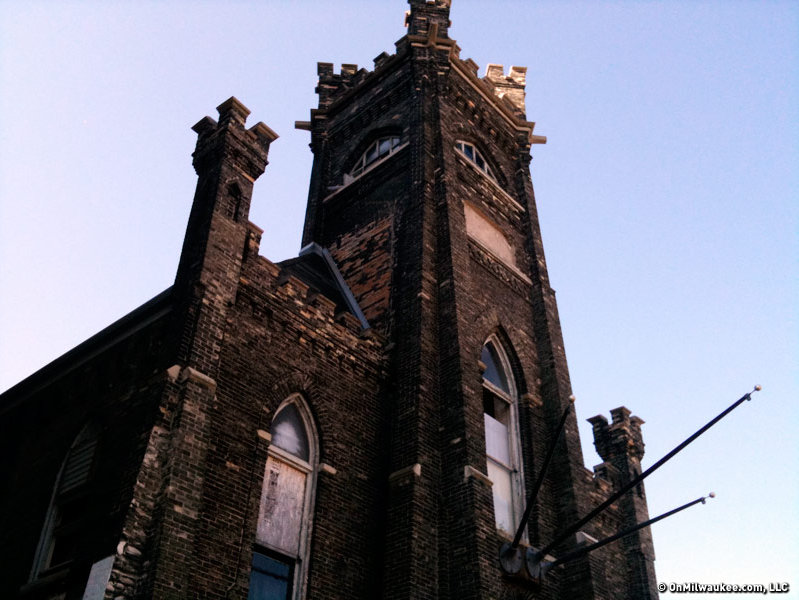 Someone told me that this boarded-up church along the east side of I-43 is for sale for $350,000. I've long thought it would make a great concert venue. Any investors out there? Built in 1872 in the Victorian Gothic style, the former First German Methodist Church – in a historic study on the Pabst Brewery historic district – was called, "one of Milwaukee's best examples of simplified Gothic." Pabst bought it and before it was shuttered it served as the company's training center. At some point between it's utility as a church and as a training center it was home to the Forst-Keller Restaurant, run by Michael and Fritz Baumann, who boasted that it was "The old home of the famous 'Gemuetlichkeit'."