A brand new ice cream brand aims to tackle the growing demand for plant-based ice cream while producing a product thatï¿½TMs just as delicious as any dairy-based treat.

Ice cream is delicious. But dairy-based ice cream is a mixed bag for folks with lactose intolerances, dairy allergies or a simple concern for the impact of dairy on the environment.

But a brand new ice cream brand aims to tackle the growing demand for plant-based ice cream while producing a product that’s just as delicious as any dairy-based treat.

Liv a Little is owned and operated by Olivia Menzia, a recent Marquette University graduate and freelance graphic designer whose life-long passion for ice cream set her on a journey to create an ice cream brand that’s accessible to – and inclusive of – everyone.

Ice cream has always been – by far – my favorite food," says Menzia. "So, during my final semester in college, my boyfriend Grant [von der Lippe] bought me an ice cream machine for my birthday."

But the gift prompted more than just a way to satisfy her own ice cream cravings. Menzia says she used it as an opportunity to begin creating dairy-free ice cream to share with friends.

"So many of my friends had food allergies," she says, "And so many of the dairy free products on the market just don’t taste that great. If I’m going to eat dessert, I want a spankin’ good dessert. So I started to play around with dairy-free ice cream."

Menzia experimented with a variety of bases, finally settling in on a coffee base made with coconut milk augmented with pieces of vegan dark chocolate.

"I mastered it in the dead of winter," she says. "And I was so excited I ran across campus with my pints of perfected ice cream like a crazy person. It was ridiculous. But I was so excited to share them with my friends."

From there, Menzia’s entrepreneurial spirit took over. She hauled out a stamp she’d purchased for pint containers and a logo she’d designed years prior for the ice cream business she’d been plotting in her head. From there, her first ice cream – 3 O’Clock Coffee – and a slew of others were born.

"I could make four pints a day at my apartment," she says. "So my schedule was frantic. But I kept it up. And I made pints and pints of ice cream to sell to folks on campus." 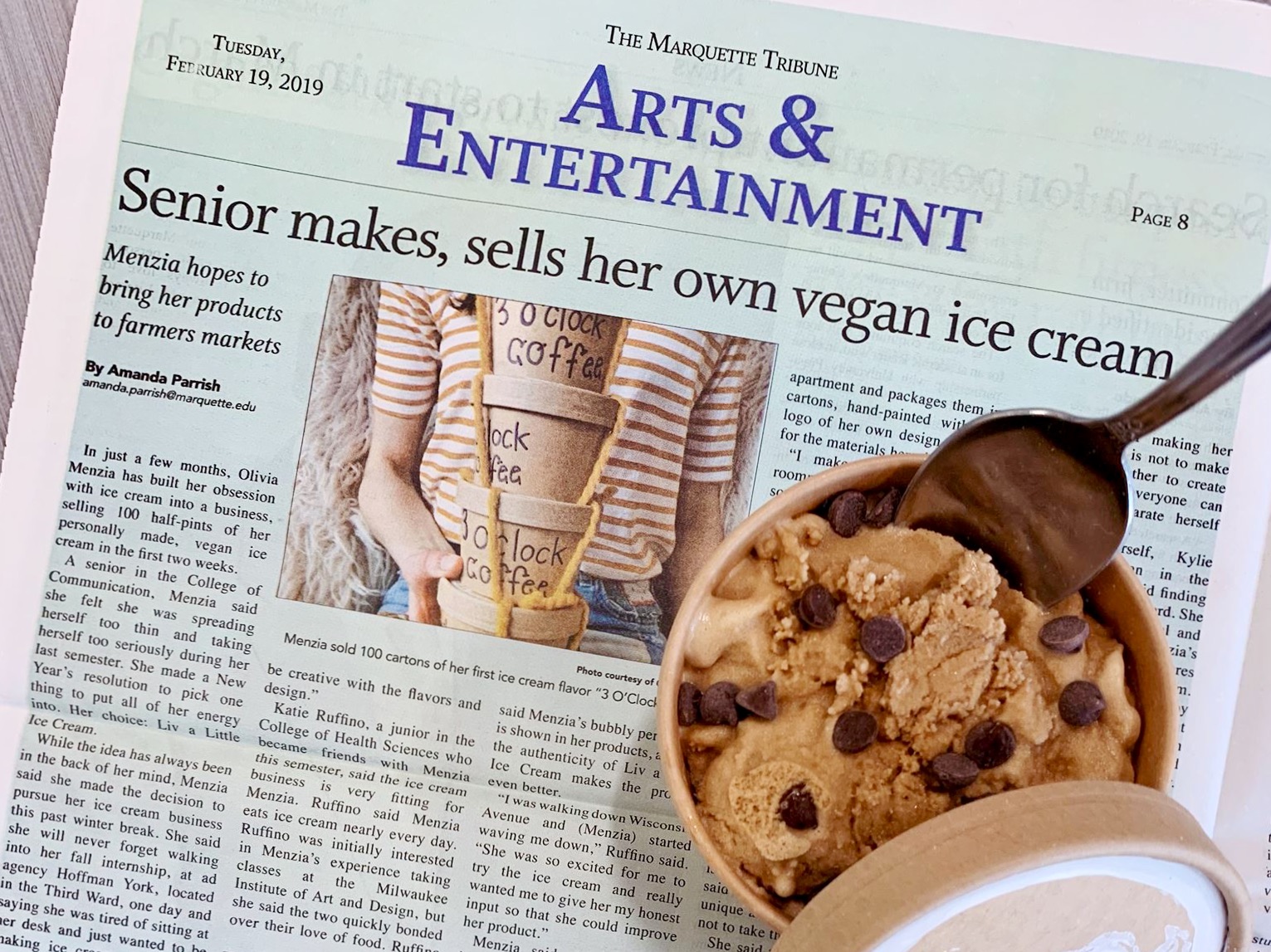 The word spread and Menzia developed a quick following. But, thanks to a combination of buzz and an article in the Marquette Tribune, university authorities also caught wind of her swiftly growing ice cream business and quickly shut her down.

"I didn’t intend to break any rules," she says. "But I really had no idea that running an ice cream business out of my apartment wasn’t such a great idea."

What she did know was that she was onto something. So, after shutting down her illegitimate apartment-based ice cream kitchen, she decided to explore exactly how to go about launching her business the right way. 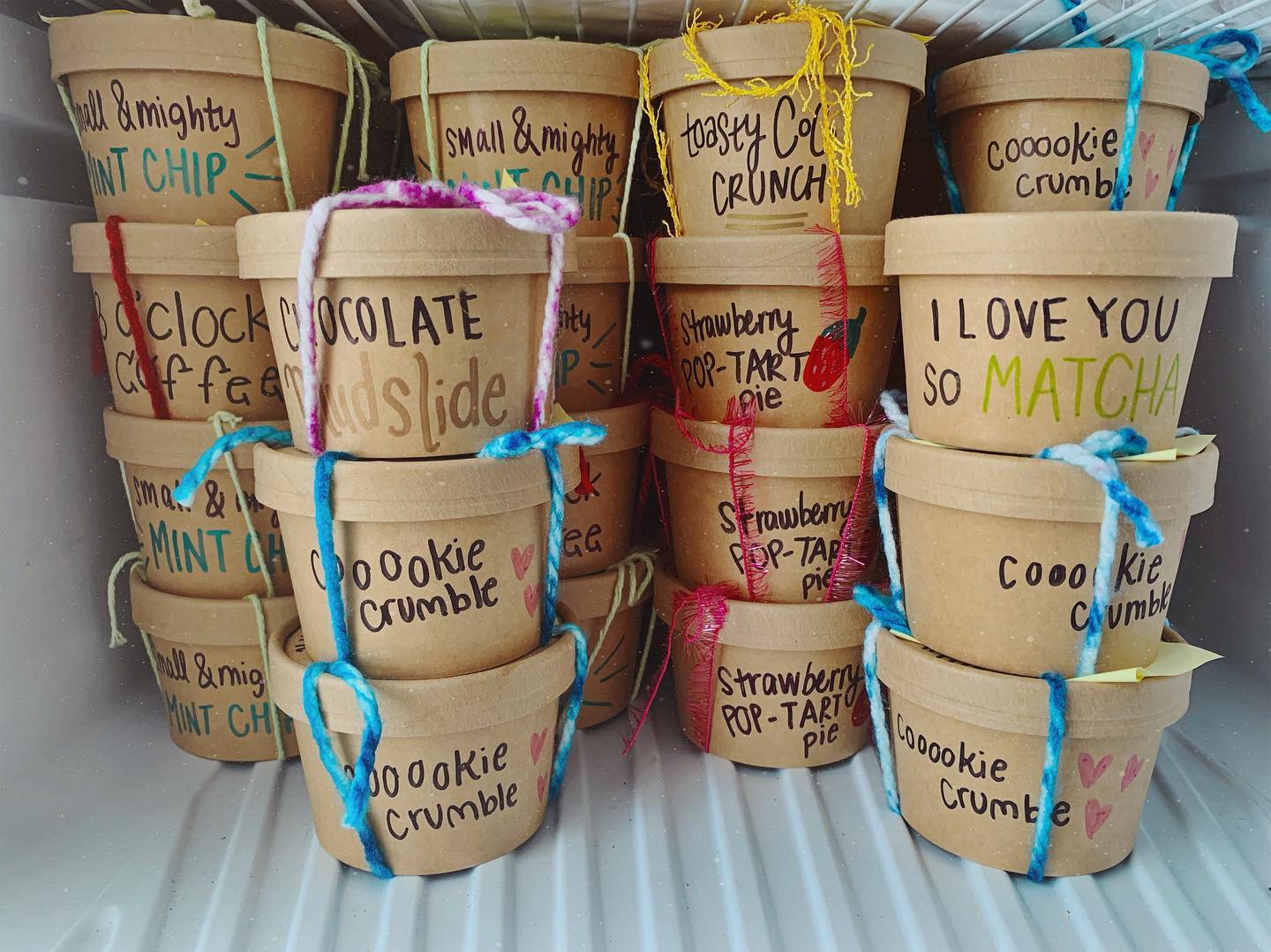 Off to sundae school

In 2019, she entered Marquette University’s Brewed Ideas Challenge, a Shark Tank style competition run by the Kohler Center for Entrepreneurship. Her presentation wowed the judges and she and came away with $7,500 in seed money, which she used to purchase a commercial ice cream maker and an ice cream cart.

"I wouldn’t have been able to afford that right out of college if I hadn’t won," says Menzia. "That was definitely the boost I needed going into the summer."

From there, she took on a fellowship with The Commons, which provided her with the wherewithal she needed to launch her company.

"The program not only gave me the foundation for starting my business," she says, "But it also showed me the value of remaining in Milwaukee and investing in the city."

Menzia says she spent months after that perfecting her ice cream recipe (ultimately adding oat milk creamer to perfect the texture), as well as experimenting with various flavors from vanilla to salted caramel. She also went on the hunt for a commercial kitchen space and filed the appropriate paperwork to operate as a licensed food-based business.

Everything came together in March of 2020 and Menzia says she planned to launch her business by selling ice cream at farmer’s markets and establishing partnerships with area restaurants who might be interested in purchasing her plant-based ice cream to feature on their menus.

"I’m such a big fan of local restaurants," says Menzia. "And I have such respect for the industry. So it’s been my long-time dream to see my ice cream featured on menus at my favorite places." 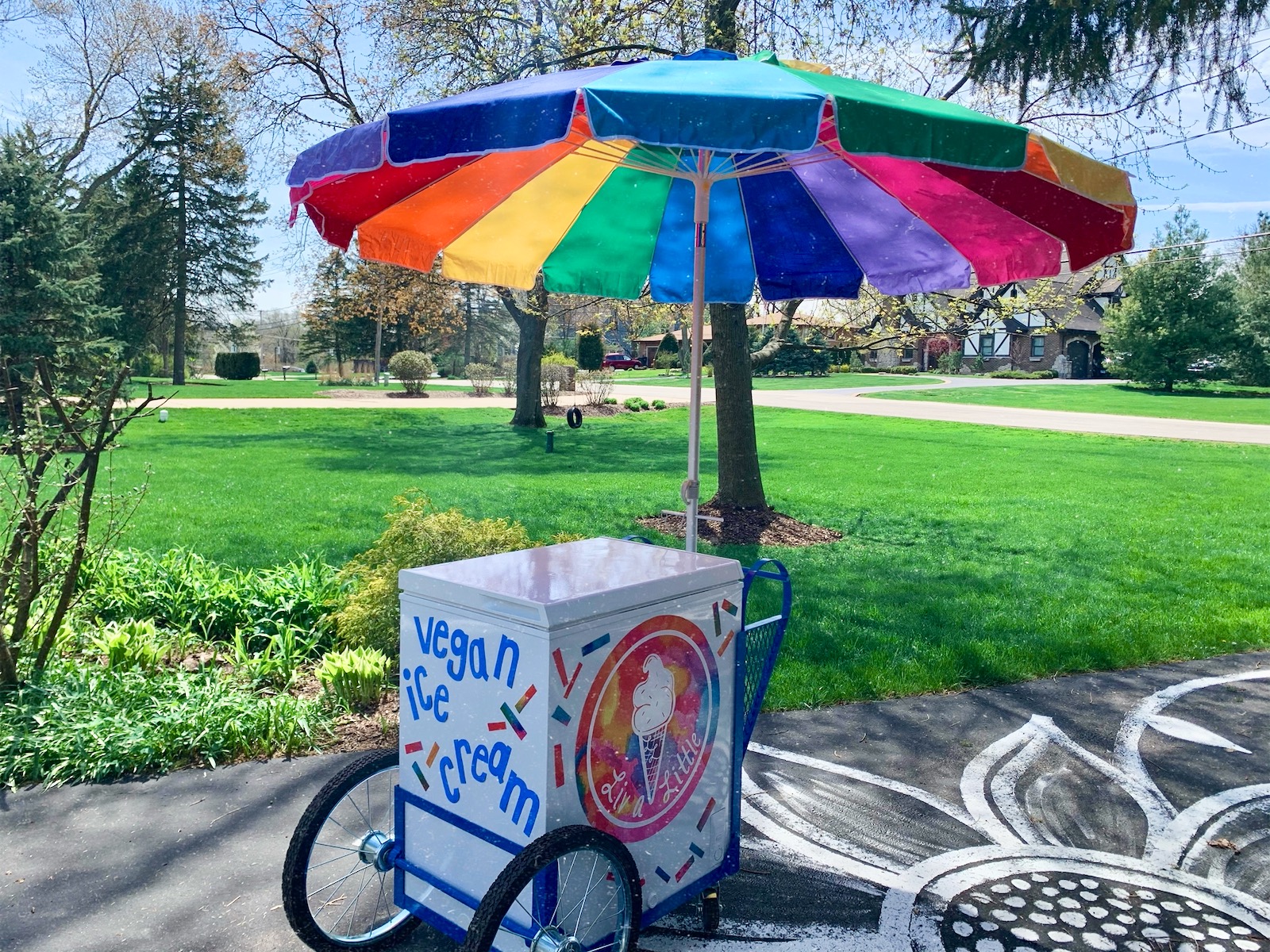 But her plans were dashed as the COVID-19 pandemic hit, pushing off farmer’s market opening dates and leaving restaurants to fight for their own survival.

"Right now, restaurants are the super heroes of the food world," she says. "And I know it’s been a tough time for them. So, I decided to hold back on pitching to restaurants and, instead just support them with take-out and promoting their businesses for a while."

Fortunately, a connection with a college acquaintance gave her hope that she could still move forward.

"Dead Bird Brewing had reached out to me months before I had my licensure," she says. "But I was fortunate to have met their art director Hailey Madej during a packaging class I took at MIAD, and she reached out months later to see if we could collaborate."

Menzia says she’s currently with them on the creation of a new stout ice cream made with their Shillelagh Stout.

But they are also using her vanilla ice cream for a variety of refreshing summer treats including ice cream floats made with Dead Bird rhubarb or orange cream soda (12-ounce for $6 and 16-ounce for $9); and their mocha milkshake made with coffee and chocolate ($6/$8).

Milkshake anyone??? We've got a new beauty added! Featuring @livalittleicecream we have a delicious cookies & cream style milkshake. We add a touch more chocolate and top it with some whip and a cookie to finish it off! Come and get 'em! Order via link in bio! Open 3:00 - 8:00 Cheers ð»

Guests can also order specialty Liv a Little milkshakes, which come in flavors including vanilla, chocolate, cookies and cream, vanilla malt and chocolate malt (12-ounce for $6 and 16-ounce for $8).

Menzia says she’s also catering a variety of events from birthday parties to weddings and corporate events while working on a variety of side projects, including building relationships with local food purveyors, mastering a recipe for her own oat milk and gearing up to attend the ice cream short course at Penn State this winter.

She says she’s also dreaming of next steps for the business, which she hopes will be successful enough that she can eventually buy her own ice cream truck (below is a mock up of Menzia's dream truck) and maybe even launch a scoop shop of her own someday. 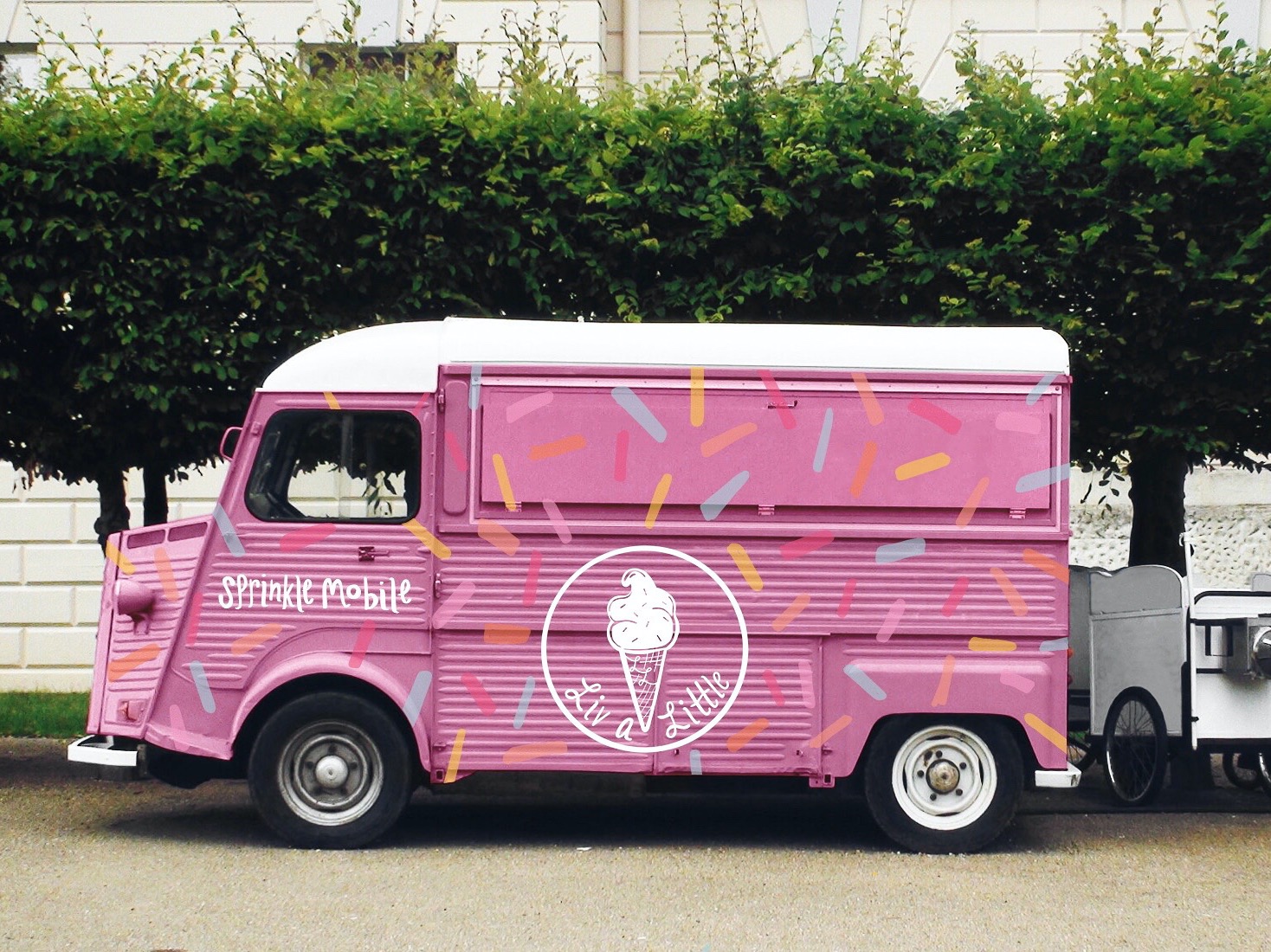 "Even just a stall in a place like the Public Market or Zocalo would be great," she says. "I love the Milwaukee food scene, and it would be my dream to be a part of it."