Lizzo accuses Summerfest guard of attacking her team after concert

After the rising pop star's 10 p.m. headliner gig at the Harley-Davidson Roadhouse, Lizzo took to Twitter to accuse a Summerfest security guard of tackling and attacking her stylist and hair stylist.

Pop star Lizzo called Thursday night's Summerfest show "the best show ever," but unfortunately due to an alleged post-concert incident, that likely won't be the story on Friday morning.

After the rising pop star's 10 p.m. headliner gig at the Harley-Davidson Roadhouse, Lizzo took to Twitter to accuse a Summerfest security guard of tackling and attacking her stylist and hair stylist, asking those who witnessed the incident to send footage.

Later tweets elaborate saying that the guard allegedly used "hurtful language" during the disturbance while also tackling and dragging her team members off the grounds. Another tweet features Lizzo accusing a Summerfest guard in a short video of being the man behind the supposed incident, claiming that "he needs to be in handcuffs."

DID ANYBODY GET FOOTAGE OF THE SECURITY GUARD THAT TACKLED AND ATTACKED MY TEAM @SUMMERFEST ?!

In a later tweet, Lizzo called the evening "beautiful," as well as thanked Summerfest – though she still notes that she'll file a complaint against the accused guard, telling Summerfest she hopes "you'll be cooperative in seeking justice."

Tonight was beautiful. You are beautiful. But the struggle ain’t over. Racism and bigotry don’t care if you’re a headliner. Thank you @summerfest. We will be filing a complaint against that bigoted "security" guard and I hope you’ll be cooperative in seeking justice. 🤘🏾xoxo pic.twitter.com/bt3J5Cy1AS — |L I Z Z O| (@lizzo) June 28, 2019

OnMilwaukee has reached out to Summerfest for a comment, but did not receive one at time of writing. However, Lizzo posted to Instagram and Twitter early Friday morning that Summerfest responded and will investigate the incident. 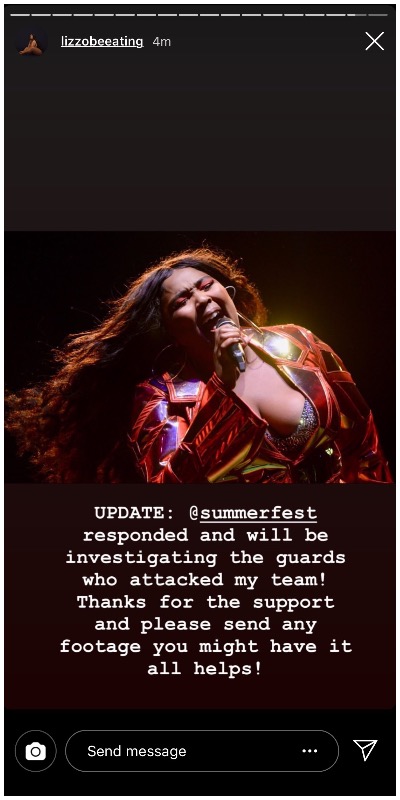 Summerfest also responded to the alleged incident on Twitter:

1/2 Lizzo gave an incredible performance which she now feels is tarnished by events which occurred during the performance. We do not tolerate racism in any form. We will conduct a thorough investigation. — Summerfest (@Summerfest) June 28, 2019

2/2 We have an experienced crowd management staff who strive to protect performers & fans. While there may be challenges during a performance, we expect those challenges to be handled professionally & respectfully. If those standards were not met, we will take appropriate action. — Summerfest (@Summerfest) June 28, 2019