Carl Reiner leaves behind an impressive legacy as an entertainer, but also as one of the truly good guys in Hollywood, a person who everyone has a good story to tell and a kind thing to say. One of those people is Milwaukee filmmaker Steve Boettcher.

The world became significantly less funny late last month when comedy icon Carl Reiner passed away in Beverly Hills at the age of 98, leaving behind a legendary career of laughter both behind the scenes as a key writer on "Your Show of Shows" and "The Dick Van Dyke Show," as a director (Steve Martin's "The Jerk"), as a performer alongside Mel Brooks and so much more.

Reiner leaves behind an impressive legacy as an entertainer, but also as one of the truly good guys in Hollywood, a person who everyone has a good story to tell and a kind thing to say.

One of those people is Steve Boettcher, a Milwaukee-based filmmaker who's spent much of his career helping chronicle the influential lives and work of Hollywood legends with projects like the PBS series "Pioneers of Television" and "Betty White: First Lady of Television," currently available on Netflix. And – if you're going to record the history of television and comedy – you have to chat with Carl Reiner.  Boettcher did so several times, gleaning precious insights into the early days of entertainment, Hollywood, life and fellow icons in hilarity.

While the tributes continue to pour in on Reiner's incredible career and great contributions to comedy, we reached out to Boettcher to hear what he had to say about his conversations with Reiner, his thoughts on a sadly disappearing generation and how their work still lives on far beyond them.

OnMilwaukee: How did you and Carl Reiner meet?

Steve Boettcher: My first recollection is as a kid. I grew up in small-town Wisconsin on a steady diet of Cap'n Crunch and tater tots and reruns of "The Dick Van Dyke Show." That was when I first fell in love with "The Dick Van Dyke Show." I just kind of loved the idea of a show about people working in television. It was kind of the first show like that, and it captured me and made me think that I wanted to work in a business like that.

So I first actually met Carl then in 2005. We were doing a film on the early pioneers of television – and Sid Caesar was right there in 1950 with "Your Show of Shows." We started doing interviews in Los Angeles, and all of a sudden, we had the entire cast of "The Dick Van Dyke Show" – Dick Van Dyke, Mary Tyler Moore, Morey Amsterdam, Rose Marie, Carl Reiner – that we got to be kind of friends with and spend time with.

A year or two ago, we did a film on Dick Van Dyke, a tribute to his career, and Carl was in that. We also did a film earlier, a tribute to Mary Tyler Moore when she passed away, and Carl’s also in our current one that’s on Netflix right now, one on Betty White. So Carl’s been in four of the documentary films we’ve done. 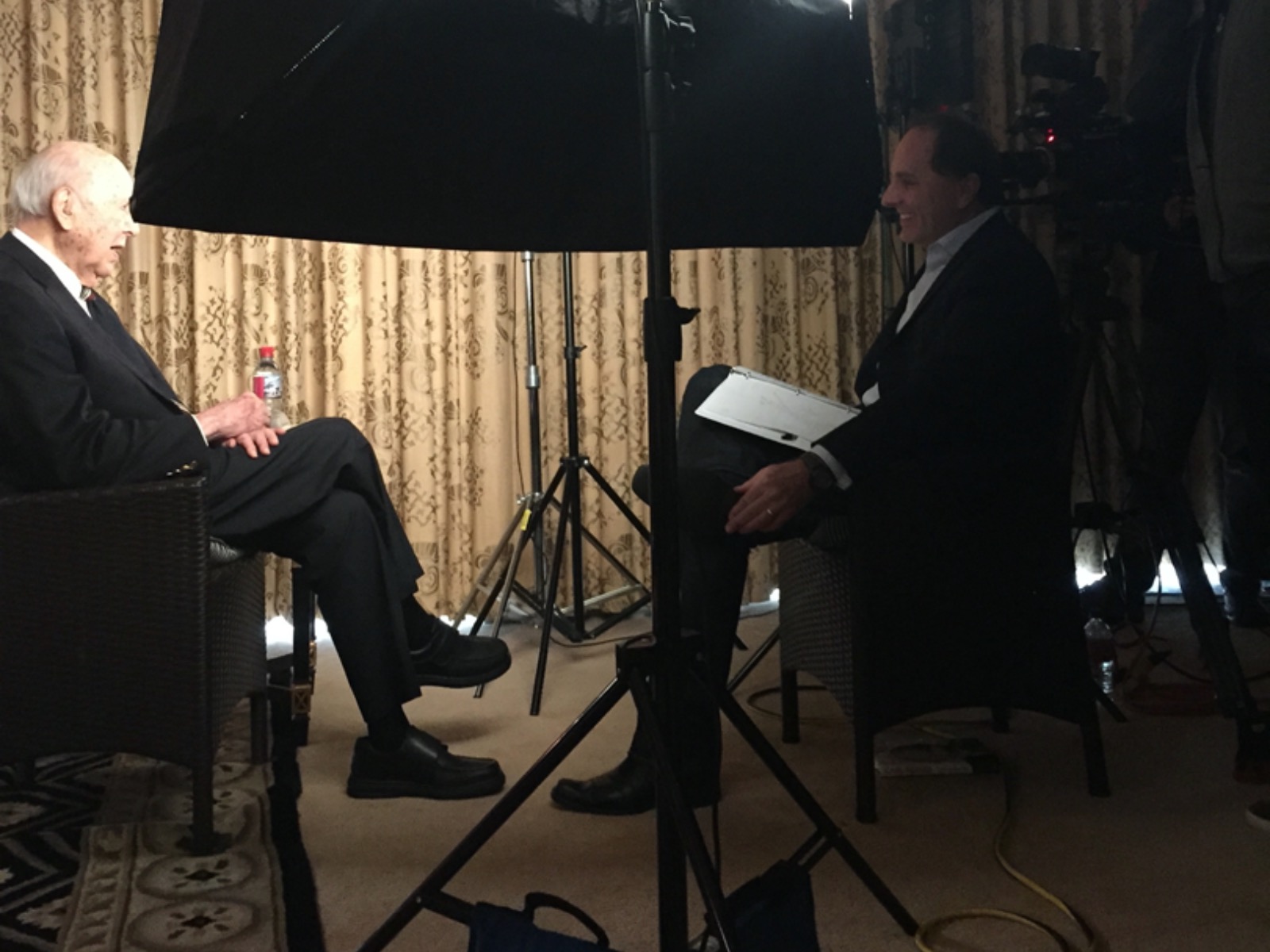 What was I like meeting and interacting with Carl?

First of all, he is truly a mentor to everyone in the business. He’s just a giant and probably the best liked man in show business – this elder statesman of comedy kind of feeling when you meet him.

You go to his house in Beverly Hills, and that’s where you go to spend time with him or meet with him or interview him; you literally just ring the doorbell and Carl comes to the door and greets you. It’s always late morning; he wants you there around the mid-part of the day because at night, Mel Brooks is coming over to watch "Jeopardy" and "Wheel of Fortune," so he wants you to wrap up business in three or four hours.

What do you think it was about Carl Reiner that made him so beloved as a figure in the industry but also just as a person?

He just loved to have fun, to laugh, to have people with him who made him laugh, and I think it was just something that was infectious. Every time you saw him, he had a grin on his face, and you knew something funny was going to happen. He was just this personality that you loved being with.

During the Betty White documentary, we were on set with him and Betty working on a scene together from "Hot in Cleveland." They were boyfriend and girlfriend together going on a date, and I remember everyone came out of the woodwork to watch these two professional, well-versed actors work together. Behind the camera, you saw rows and rows of people watching this scene with Carl and Betty, these two playing off each other and the sparks flying and the magic of those two working together. Betty and Carl were really close, and we talked last week a little bit out west. She will greatly miss him, I know that.

Do you have any favorite Carl Reiner stories that really stand out to you?

We uncovered a little nugget: When Carl was in the military, his commanding officer was Allen Ludden – who married Betty White later in life. (The two were married from 1963 until 1981 when Ludden died of stomach cancer.) Allen was the love of Betty’s life, and Carl knew Allen back when they were in their 20s and serving overseas. He always called Betty his "commander-in-law." Those two were only three months apart, but he always made jokes that she was so much older than him.

I think his sense of humor is probably what defines him. Sitting with him was always a masterclass in comedy. He always told me to write about something that you know, and it’ll never fail you. He came up with "The Dick Van Dyke Show," which basically was a story about Carl and his wife living in New Rochelle, and Carl working on "The Sid Caesar Show." That was really what the inspiration for "The Dick Van Dyke Show" was – and that’s what Carl wrote about.

For me, the chance to spend time with the best of television was just such a privilege, to know that person and have them inspire you. 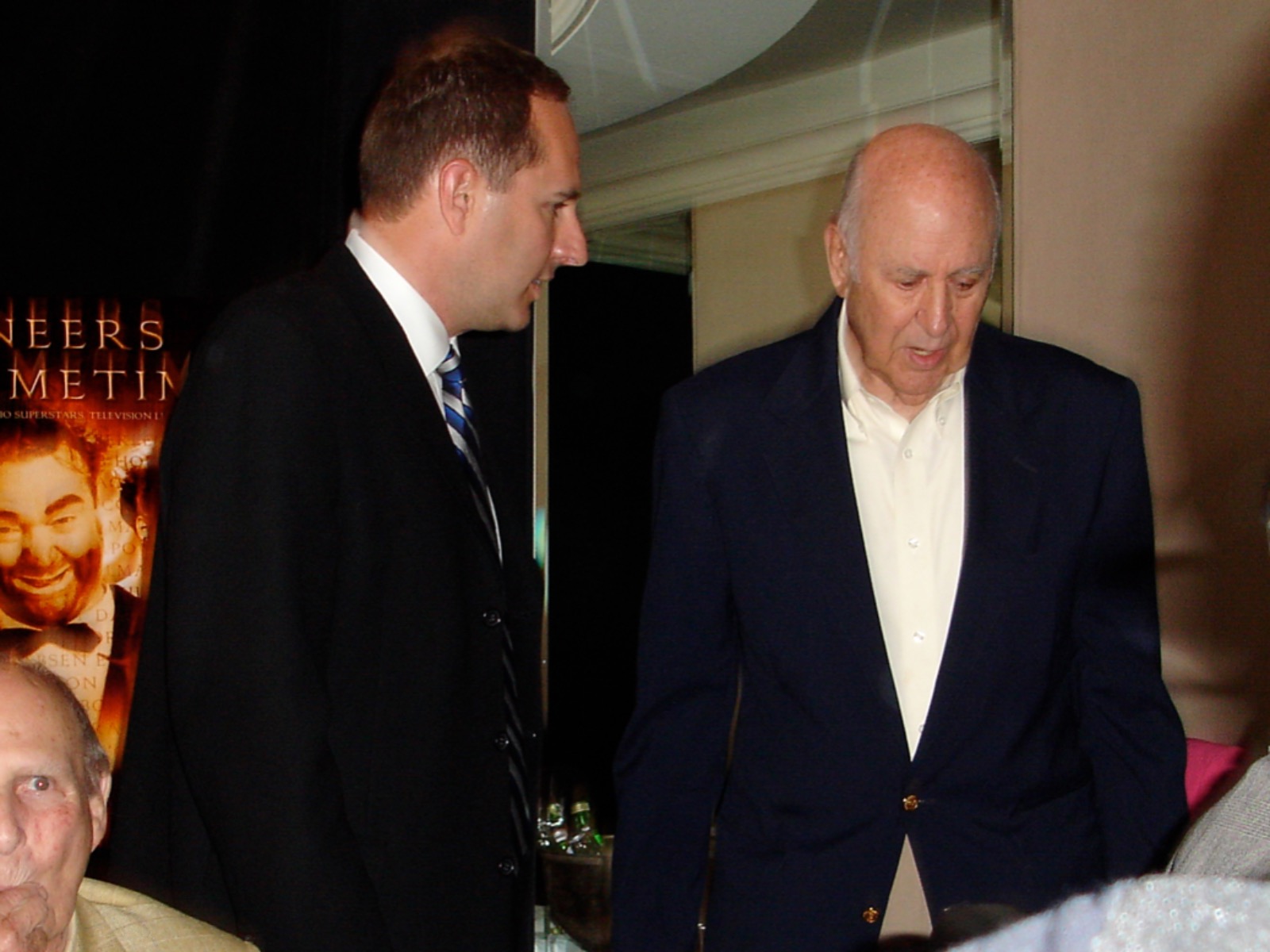 The modern celebrity, with the advent and growth of television and movies, we’ve never known more people and had more celebrities known around the globe, and now those early media generations are passing away. How do you feel about this kind of era of saying goodbye to this groundbreaking generation?

We actually started seeing this in the mid ‘90s, and I started making trips out to Los Angeles and trying to interview the last of those early pioneers – Milton Berle and Sid Caesar and Donald O’Connor and Mickey Rooney and Henny Youngman and Bob Hope. All those cats were in their 90s, and we just felt this need to preserve this history and legacy that was going to leave us. That was kind of the inspiration for a TV series we did for PBS called "Pioneers of Television."

It was an era of entertainment where you earned your talent. It wasn’t just given to you or a social media platform that created you; it was you had to have talent and an opportunity to perfect that talent. And that’s what a lot of these early television stars did. They worked on radio. They worked on vaudeville. They transitioned to television with enough gas in the tank to create shows, but they’d worked out their talent to get to where they were, and I think a lot of stars today just don’t have that staying power or talent or ability.

They also don’t have the ability to be stars that we once knew them, stars as themselves. People know Chris Evans as superheroes, and they see him as Captain America, but they don’t see Chris Evans movies. They see the character, not the performer, whereas in the past audiences saw things for the stars. They sought out Carl Reiner the performer, not just him as a character.

Exactly. I remember when we interviewed Jerry Stiller, and he said, "I grew up in an era where I had a chance to bomb and a chance to really suck in small-town America. But I learned what doesn’t work and what does. So when I bombed in Wichita, I learned never to do that again." There were places in America to bomb – and television and film is not a place anymore for that. You don’t have another shot, once you bomb in a movie or on a live stage. But they came up the ranks in small stage settings and had a chance to perfect their skills. Whatever they were called upon to do – sing or dance or do jokes or be the straight man – they could do it because they had experience in those areas.

There was a certain showman’s sensibility they’d harvested in the early parts of their career.

I get afraid that, even with the accessibility of streaming services, if something was made before 1975, audiences today just have no interest and the services don’t make it available. And if it’s not on a streaming service, people don’t care. I’m concerned we’re going to forget and lose some of our media’s history – a lot of it still very good.

That’s very true – but I did see some numbers this morning that CBS started colorizing episodes of "The Dick Van Dyke Show" and running them two or three nights ago, and it topped the ratings. They do it once or twice a year, around Christmas time, and just to see that it did so incredibly well was heartening. I think people find the shows. I know Betty White’s shows do really well overseas, and there’s a market for these programs in these other places. She tells me that she gets fan mail from New Zealand, and she knows when she sees a particular territory, they must’ve just gotten "Golden Girls." I think what’s old is sometimes new, which is good for all of us in a way.