A winning hand at Locavore

Last weekend, I popped over to Potawatomi for drinks, dinner and a couple slots. Let's get this out of the way early. I did NOT win a million bucks on the penny slots. But our last-minute detour paid dividends of a different kind.

Last weekend, I popped over to Potawatomi for drinks, dinner and a couple slots. But, let's get this out of the way early. I did NOT win a million bucks on the penny slots, but our last-minute detour paid dividends of a different kind.

Though our plan all day had been to enjoy the amazing weather by dining al fresco, as we aimed for Downtown on I-94, the sky began to look ominously dark, so we called an audible and rode Canal Street over to Potawatomi, where we selected Locavore for dinner and drinks. I had dined there once previously, at lunch, and found it fine but not especially amazing.

Because we didn't know we'd be going there, we didn't make a reservation and there was a roughly 30-minute wait, so we availed ourselves of a couple stools at the end of the bar and enjoyed a couple cocktails – a dark and stormy and a Bellini (at $5 happy hour prices) – along with charcuterie and Wisconsin cheese plates ($8 during happy hour, 4-7 p.m.)

The cheese plate had a piquant six-year cheddar from Widmer's in Theresa, along with LaClare Farm's Martone – a tangy, ripened blend of cow's and goat's milk – and a sweet, creamy, milky saxony from Saxon Creamery, along with fresh honey, pistachios and crostini.

Meanwhile, the charcuterie board had a range of treats, including Underground Meats' lightly spicy chorizo and a delicious pate, along with pastrami duck, whole grain mustard, crostini and picked veg. The La Quercia prosciutto was a highlight but a tray for two could've used more than a single ribbon of the sublime cured ham.

After a bit of a seating snafu at the host stand, we were seated at the window, where we watched nature's show, as the sky darkened prematurely. Rain began to pelt the glass and lightning streaked the sky, making us more contented with our dining detour. 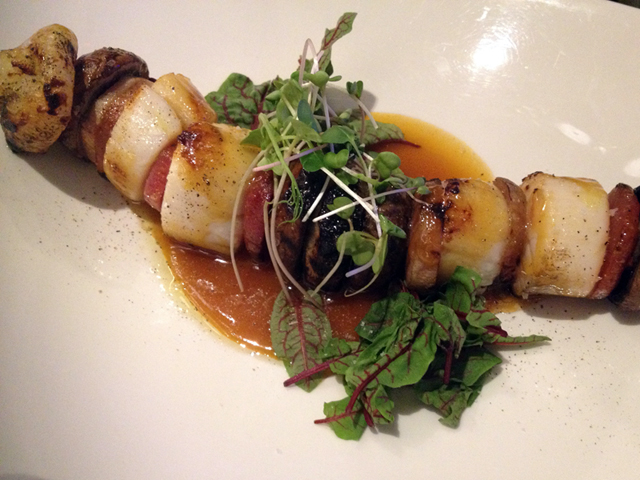 And, compliments to Chef Van Luu, both were perfectly done. Four large scallops arrived on a skewer with crimini mushrooms, pearl onions and watermelon radish interspersed. A light honey mustard was drizzled over the top of the dish, which was finished with a dollop of wood sorrel and greens.

The tender scallops married beautifully with the grilled vegetables.

The farm-raised rainbow trout was a no-brainer for me, thanks to the savory prosciutto broth it was finished with. Slices of prosciutto and tofu were mixed with peas and wild garlic scape to create a satisfying, hearty meal that spotlighted the tender, skin-on trout. 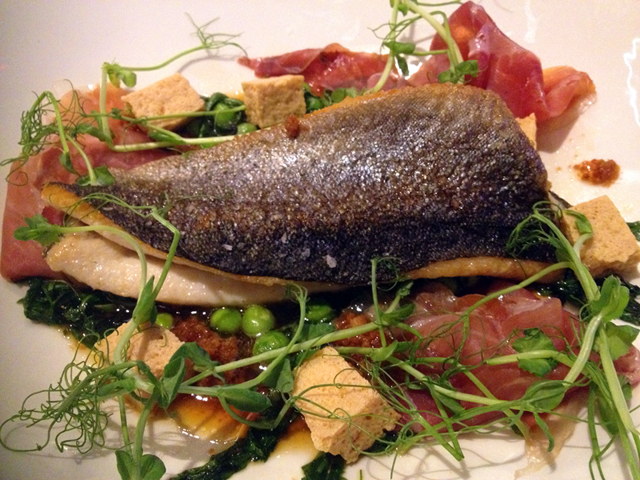 I paired it with Finch's amber Threadless IPA that lent its crisp citrus bite to the meal.

We skipped dessert and headed instead to the smoke-free slots room where, I repeat, we did not win $1 million (so don't bother hitting me up for a loan). But I still went home feeling like a winner, thanks to a hearty and satisfying dinner.