As we announced Friday, a new Polynesian bar and restaurant called The Love Shack is coming to the former Wine Maniacs space at 106 Seeboth St. in Walker's Point. The city is abuzz with the news. But, what's The Love Shack? And why should you care?

As we announced Friday, a new full-service Polynesian bar and restaurant called The Love Shack is coming to the former Wine Maniacs space at 106 Seeboth St. in Walker’s Point.

It's headed up by Black Sheep owners Michael Sorge and Wes Shaver in partnership with Gary LaCourt, Founder and CEO of Milwaukee-based jeweler Forever Companies. And it could open as soon as Memorial Day weekend.

But what is The Love Shack?

According to Wes Shaver, one of the partners on the project, The Love Shack doesn’t aspire to be just another tiki bar. However, it does aim to offer guests a classy spot where they can get away from the grind, relax and have fun.

"It’s all about location," he says. "It’s in a beautiful space on the river with great views. In fact, I haven’t seen such a perfect match between concept and location in a long time."

The idea came to Shaver while he was sweating it out during an intense cardio session sometime last year.

"The song came on. And the spirit of it ... all the energy in it … all I could think of was that The Love Shack totally had to be this great tiki bar where people can go and hang out and have a really good time.

"It’s not so much the song itself that defines the space," he explains. "It’s more the energy that it captures. That’s the sort of place we want it to be."

What The Love Shack won’t be, Shaver notes, is a simplistic caricature of Polynesian culture. In fact, its goal is to pay tribute to long-standing traditions in a fun and engaging way.

"We’re not exaggerating the culture or the style," he says. "We’re honoring it and embracing it. It’s not going to be campy or kitschy. Envision that it’s 1968 and the Beach Boys are flying to Hawaii to play a show in a small, upscale club. This is that place." 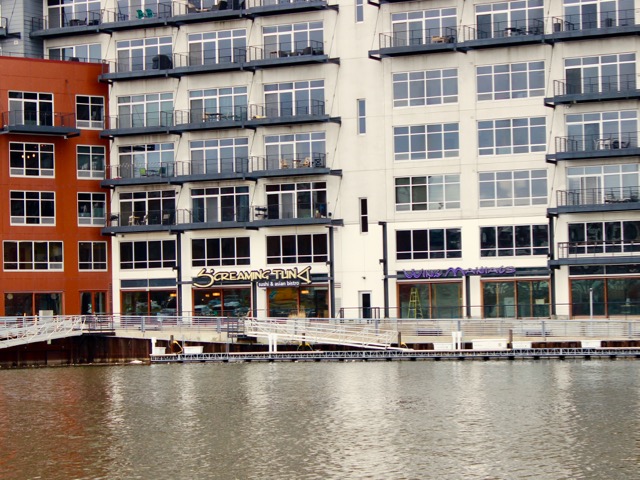 According to Shaver, the main bar will showcase a cocktail program featuring eight or nine traditional tiki drinks as well as a variety of new-school cocktails and riffs on classics.

The food menu, which will offer plays on traditional Polynesian fare, will be deployed by Chef Adam Pawlak, who will direct the culinary programs for both Black Sheep and The Love Shack.

"There’s no fryer and there’s no grill," notes Shaver. "So things will be really fresh."

The space itself will be approachable and modern, featuring clean surfaces augmented by rustic, authentic textiles and materials.

Large patio doors will open onto the spacious riverfront patio, which will boast both traditional seating, along with a collection of couches and lounge furniture. River views will be enhanced by palm trees, fire tables and a variety of atmospheric details.

Meanwhile, a second floor mezzanine will feature "The Rhum Bar," a secondary experience showcasing a rare collection of rums, a smaller, more artisanal menu and a second floor deck overlooking the river and first-floor patio.

"We’ve done our research. And we’re really excited about this," remarks Shaver. "Personally, I’m really fond of it. The core of it is so much like Milwaukee. It’s brotherly. It’s friendly. It’s about clinking glasses and hanging out and enjoying life."

Once launched, The Love Shack plans to be open seven days a week.