Berrien is an 91-year-old welfare rights activist, former member of the Black Panther Party and the first Black woman to run for the mayor of Milwaukee. To this day, she continues to work for peace and equality in Milwaukee.

Lucille Berrien’s North Side home is the hub for her social justice work as well as a base for seven of her great-granddaughters. Upon our arrival to take her to lunch for the interview (during which she ordered a plate of liver and onions at Ma Fischer’s), we overheard someone ask one of these great-granddaughters, "Who is that?" The great-granddaughter merely shrugged and answered, "She knows everyone."

Berrien is an 91-year-old welfare rights activist, former member of the Black Panther Party and the first Black woman to run for the mayor of Milwaukee. 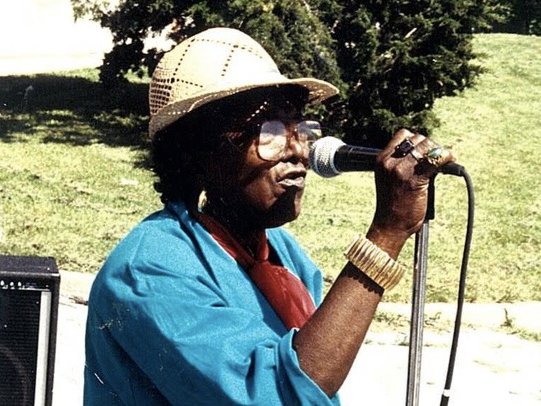 In 1953, Berrien and her two young children moved from Florida to Milwaukee after her husband was killed in the Korean War. She had married at 16 and had her first child at 17.

"I was 24 years old when I became a widow, and I think about all those mothers who have husbands in Iraq. It will be harder for them than it was for me," says Berrien. "I always said that if anything happened to my husband I would take the kids up North. I thought they would have a higher quality education."

"We talk on the phone a lot. She remembers stuff I don’t remember," says Berrien.

Upon first arriving in Milwaukee, Berrien was a domestic worker in Bayside and Whitefish Bay homes.

"Then the civil rights movement came, and I got involved in that," she says. "And Open Housing here with Father (James) Groppi, who was my friend."

Open Housing was a movement to eliminate segregation in Milwaukee. In 1962, Vel Phillips, the first Black woman to graduate from the University of Wisconsin-Madison Law School as well as the first woman and the first African American elected to the Milwaukee Common Council, introduced the Phillips Housing Ordinance, a bill that would have outlawed housing discrimination.

When the ordinance did not pass, the Open Housing movement heated up and Berrien marched across the 16th Street viaduct with Groppi at the height of the Open Housing marches. Groppi, a Roman Catholic priest and civil rights activist, left the priesthood in 1976 to marry Dr. Margaret Rozga, an English professor at the University of Wisconsin-Waukesha. He died of brain cancer in 1985.

Berrien became involved with welfare rights and took a class in Chicago to become an organizer.

"I was still a welfare recipient myself at the time," she says.

Berrien marched with Father Groppi in the Welfare Mother’s March from Milwaukee to Madison to protest funding cuts. "He was a great man," she says.

In 1970, Berrien spoke to thousands of Milwaukeeans at a demonstration on the University of Wisconsin-Milwaukee campus after the Kent State shootings. Around this time, she got involved with the Black Panthers.

"I supported them. I thought what they were doing was correct," she says.

In 1972, Berrien ran for mayor of Milwaukee, making herself the first Black woman to do so. She ran against Mayor Maier as a non-partisan candidate and says, although she attempted, she was unable to get Maier to debate with her.

"It was a lot of hard work," she says. "And I knew I wasn’t going to win. There are two kinds of power: money power and people power. If you don’t have the money, you can still win with people."

Also in 1972, Berrien ran the local committee for Shirley Chisholm during her bid for the Democratic party presidential nomination. Chisholm was the first Black female elected to the U.S. congress and a vocal opponent of the war in Vietnam.

Berrien supports Vietnam Veterans Against the War and was a local chairwoman of the People’s Coalition for Peace and Justice, a national organization she helped form with her friend John Gilman. Gilman, a decorated World War II vet and an activist by the time he left high school, wrote an autobiography "Foot Soldier for Peace and Justice," published in 2009.

"Things are going so backwards in Milwaukee, makes you wish for those days to come back," she says.

Berrien has been on the board of Legal Action of Wisconsin for 40 years. Deedee Rongstad, Development and Information Director for Legal Action, has known Berrien for more than 25 years.

"On a personal level," Rongstad says, "I try to enact Lucille’s philosophy – her belief that taking care of others is an essential part of being human and that we can best take care of others when we have a decent public support system to do so. Her life experience is deep and that depth is incredibly informative and beautiful."

"On a professional level, my law firm also enacts her philosophy. If we make Lucille proud, I know we’re doing our job and making good on our mission statement," says Rongstad.

"Lucille Berrien is definitely one of Milwaukee’s unsung heros," says Wansheba Barnes, Founder and Executive Director of the Village of Hope, on whose board Berrien also sits. "She gives of herself tirelessly to the downtrodden, the voiceless and the hopeless. It is such a pleasure to have her serve on the board of directors at Village of Hope."

Berrien is also on the boards of the Black Health Coalition and Freedom Through Equality.

"When you’re old, you get on the board," says Berrien, acknowledging her status in Milwaukee but perhaps also suggesting she’s slowed down some after her decades of political and social activism.

Berrien was arrested "five or six times" during marches and protests. She visited the defunct American Motors plant on Richards Street (where there is now a Walmart) twice a week and passed out union literature. She would often get there by 6 a.m. and she said some workers would try to spit on her.

"So many young folks working there," says Berrien. "After Open Housing, me and Father Groppi got involved in a lot of other stuff, making sure people got fair wages, such as it was back then, then got welfare rights.

On June 16, 2010, Berrien had a stroke, yet as she says, she is still very much active. The day before our lunch, she helped the hard-of-hearing mother of a young daughter find a place to live.

"It’s the same kind of work I always did," she says. "And I told her ‘one child is enough’ – who am I to say? – but she can only take care of one child sufficiently."

"They need to know why they are where they are," she says. "And they don’t. It’s the young people that make the world go ‘round."

"I want change for my grandchildren," says Berrien.

Faithe Colas, the former publisher of the Milwaukee Courier and the current community relations director for the Salvation Army, is one of Berrien's grandchildren.

"My grandma had a huge influence on my life choices in terms of my career," says Colas. "I always tell people that she was my first girlfriend and my best friend."

"My grandma would come and pick me up on Saturday mornings and everyone else would still be asleep. I would leave a note for my mother and my grandma and I would be at the estate sales by 7 a.m.," says Colas.

Colas says Berrien also taught her the importance of giving back.

"She put the voice in my head that says, ‘You have a responsibility to take care of people less fortunate than you are,’" says Colas.

Despite her age, Berrien continues to live an impassioned, fearless life.

– Royal Brevvaxling contributed to this report.