Present Music turns one year older, but still manages to stir and surprise

Saturday night, I walked into Present Music's season-opening "Made for Milwaukee" show wondering how the hell to define the local new music ensemble. I walked out with the same thought - and finding that's what I maybe liked most about it.

Even throwing a concert event lined up mostly with previously commissioned and performed pieces likely familiar to the regulars in the crowd, it’s difficult to walk into a Present Music show knowing exactly what to expect.

Saturday night, I trotted into the local music ensemble’s season-opening "Made for Milwaukee," hosted by UWM’s gorgeous Helene Zelazo Center for the Performing Arts, as a relative novice of both Present Music and "new music," a maddeningly vague and ambiguous term for the fittingly undefinable genre. I’d certainly read – and occasionally even written – about past shows, but trying to draw a common thread between them left my brain webbed up like some mad conspiracy theorist’s bulletin board.

The concerts are hosted … seemingly pretty much anywhere. The ensemble is composed of five people … or 20 … or somewhere between, depending on the selected pieces, which are classical … but sometimes electronic … or a mix of the two – with special projection screens, poems and spoken word pieces injected into the cacophony. From the outside, the only true unifier between them all seemed like I needed a beret, an endless cup of espresso to sip and a master’s in music theory to fit in and make sense of it all. So walking in Saturday, like a stranger to football at his first Lambeau tailgate, I had my mental list of safe conversation answers and thoughts all set to go. "Yes, Jerome Kitzke," I would say when addressed, nodding my head thoughtfully, "very idiosyncratic, I think we can agree." Cue a mirthless chuckle and a drag from my long cigarette holder. 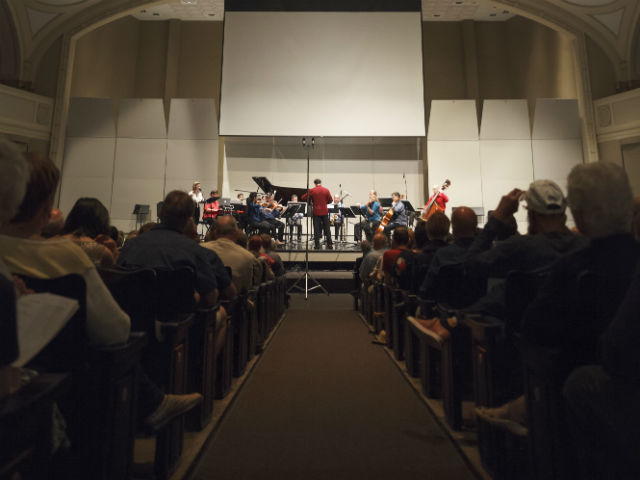 But mirthless chuckles and berets needed not apply Saturday night, as "Made for Milwaukee" was a fascinating sonic experience, far less the pretentious and impenetrable music thesis reading of one’s nightmares and more a fully engaging and challenging music adventure poking, prodding and exploring its potential and possibilities.

Any sense of pretense was easily deflated with one word: iMonkeypants. As one might predict, iMonkeypants is a music app (obviously) on display Saturday night, created by Ryan Carter, one of the evening’s composers. Tucked away in one of the hall’s rooms, Carter demonstrated the impressive app, which creates sound that the user can alter and mix by simply tilting their device in any sort of direction. The resulting user-made mixes and experiments were cool in theory – and even cooler in practice.

The rest of the show’s pre-concert demonstrations were equally inviting, many leaning into the night’s "Made for Milwaukee" theme with maps showing where past Present Music pieces had ventured over the years from their Milwaukee origins and where attendees were from in the southeast Wisconsin area. There was also a table of Betty Brinn-approved homemade mini-synths and gadgets – somehow there was a wrench involved – in the lobby, but unfortunately, it seemed there were more eager participants than people to work the table, so I wasn’t able to give my mini-synth skills a go before it was show time.

Speaking of which: the show. After some opening words from artistic director Kevin Stalheim, the evening started with Kamran Ince’s "Arches," an ode to the architectural shapes and forms. Performed by a six-person ensemble, the piece was an unpredictable arrangement of gentle waterfalls of string sounds with jazzy bursts of trumpets and battling flute-trumpet duels. It was majesty and chaos meshed together into one intriguing tune.

Chaos continued to reign in the evening’s second selected piece, "Haunted America" from Jerome Kitzke. Written in response to 9/11 and its aftermath – I’m not one for needing supplementary material to understand and appreciate art, but the show’s program served as a special key to unlocking and guiding one’s thoughts toward the music – the arrangement played as an apocalyptic Rorschach blot for the audience, asking the crowd amidst the strumming, chiming, yelling insanity, "Hey America, what haunts you?" And I mean that quite literally, as a vocalist clad in a brown vest and a thin ponytail – cue another gust leaking out of any air of pretense – proposed the question in between fits and starts of whistles and nonsensical instrumental singing. Kitzke: very idiosyncratic indeed.

After a short intermission, "Made for Milwaukee" continued on into likely its most conventional piece, "Four Proverbs" from Michael Torke with opera singer Alisa Jordheim at the forefront. Through her lovely soprano voice, the jumbled then reconfigured words of the four proverbs sometimes blended into the rest of the ensemble as another instrument, only to then pop out and return into the harmonious blend of classical sound. If you were hoping for basic, clear-to-hear words, you were at the wrong show – and again, this was the most traditional of the five selections.

"Proverbs" led to the premiere of Carter’s latest work, called "On a better filtering algorithm" (only slightly more normal than iMonkeypants). Despite its techno-focused name, the piece was a mostly traditional orchestral piece – albeit not at all traditional, returning back to the chaos of the stringed instruments falling in and out of unity together until its final harmoniously still fade-out. It was around here my appreciation for the musicians reached its high point, marveling how they could play these often combative and disparate rhythms and notes that surely 95 percent of their music-trained brains wanted to violently reject and launch into the sun. 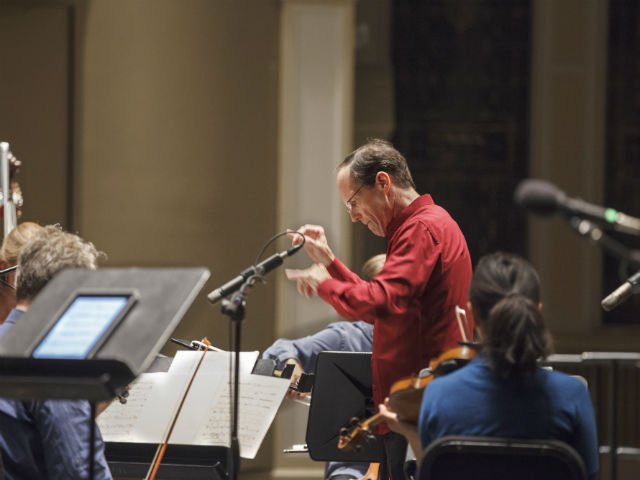 The evening ended with one final descent into musical chaos, the "Breaking Point" by Sean Friar, an industrial-leaning mental breakdown in musical form, highlighted but a raw, rough and fuzzy electric guitar creating an extra layer of tension to the experience. And like a final poof out of the evening’s balloon of pretense, the fascinatingly menacing piece ended with an instrumental poot of air, a little laugh of a punchline to the ten minutes or so of musical panic attack. Cue the after party and me walking out not completely sure what to make of what I’d heard – but knowing I liked the experience of hearing it, rattling new sounds and rhythms off my ear drums.

There were a few nitpicks on the night; I could’ve used maybe one more person working the Betty Brinn mini-synth table, and if you weren’t looking for it, it was easy to miss Carter’s iMonkeypants demonstration tucked away in a room well off in the back of the lobby area. As for the show itself, the transitions between arrangements weren’t particularly graceful, and as its world premiere, it might have been nice to hear Carter’s thoughts on the piece. But these are small complaints, like grumbling about the edges of a pie crust when the filling is sublime.

And, of course, a Present Music show probably still won’t be for everyone. It’s not for casual listening, for letting the music wash over you (not that there’s anything wrong with that, obviously). It’s for listeners interested and eager to hear something that tests all the coils and ridges of their brain, that want a 1,000-piece puzzle dumped in front of their cochleas and told, "Have at it."

Saturday night, I walked into the hall wondering how the hell to define Present Music. I walked out with the same thought – and finding that’s what I maybe liked most about it.