A 100 foot journey: The making of Irie Zulu

The decor of Irie Zulu tells a story. And it's the tale of not only a restaurant, but the culmination of a woman's three-year journey, and an introduction to a very intimate - and authentic - native African experience.

That’s the first thing Yollande Deacon said to me as she walked me through her new restaurant, Irie Zulu, late last week.

The restaurant, which specializes in cuisine inspired by the cultures of Africa and Jamaica, opens at 7237 W. North Ave. on Friday, Nov. 6. But Irie Zulu has always been about more than food. It is, in fact, a culmination of a three-year journey during which Deacon has worked devotedly to introduce Milwaukeeans to a very intimate – and authentic – part of her native African experience.

Born and raised in Cameroon, Africa, Deacon came to the U.S. by way of a scholarship to Marquette University through which she completed her M.B.A. as part of an exchange program with the Catholic University of Central Africa. After earning her degree and marrying her husband, Mexton, a native of Jamaica, Deacon says she felt compelled to launch a business which would allow her to share the wealth of African culture with those around her.

Through Afro Fusion Cuisine, a line of spice blends and sauces, Deacon exposed versatility, uniqueness, heritage, beauties and treasures of both Jamaica and tribal Africa. And Milwaukee was transfixed.

As her business grew, she found herself not only needing a larger commercial kitchen to accommodate demand for her products, but also desiring to share more of herself and her culture. And thus, she made the decision to launch Irie Zulu.

"We don’t talk about the journey," says Deacon, as she walks me across the restaurant. "We tend to focus on the destination. But, this place … this business … is the story of my journey."

The journey begins with the cafe counter, which sports decorative details made with African bibunga and mohogany wood. Along the very edge, a strip of fabric augments the richness of the wood.

"That’s fabric from a buba – an African dress – which my grandmother gave me when I came to the U.S.," Deacon tells me. 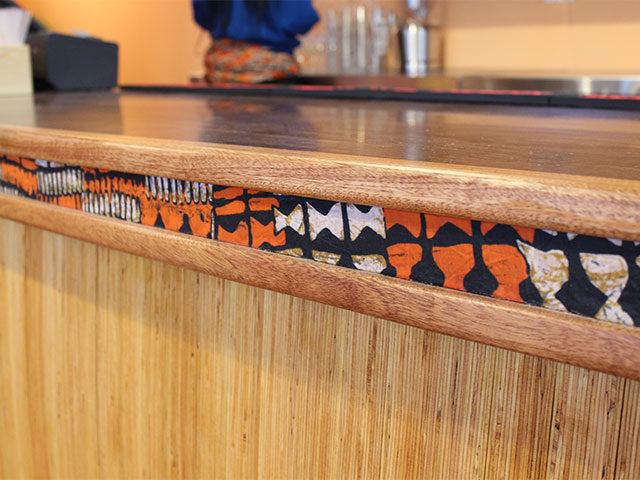 Her grandmother, who passed away this past June, was one of Deacon’s mentors.

"She could cook anything out of everything," she notes, "And she taught me just about everything I know about cooking."

The counter lies beneath a colorful overhang of thin wooden strips of repurposed barn wood, arranged to mimick the look of a West African hut.  The conical shape of the roofline, Deacon tells me, symbolizes wealth and strength. 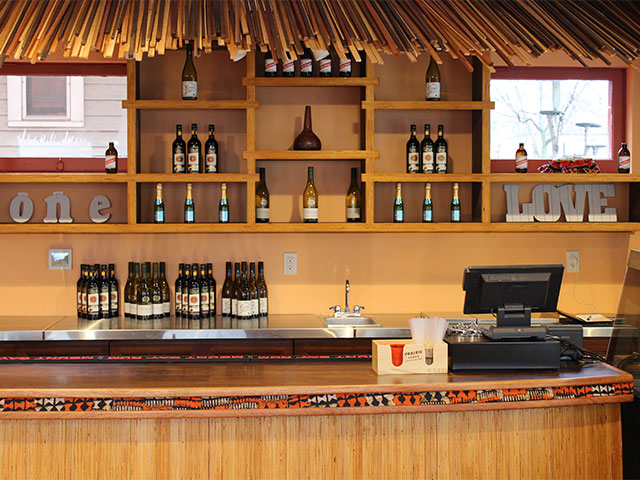 To the left of the counter is a collection of three rounded beaded pieces, one of which has been made into a mirror. These, Deacon explains, are items that were handmade by women from the Masai tribe in East Africa. 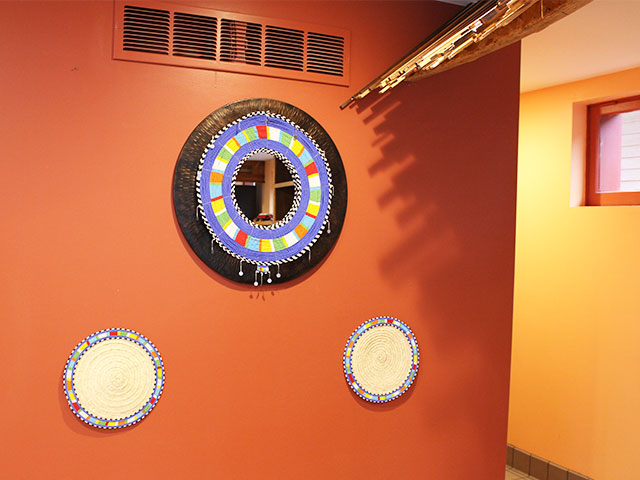 "They’re made by a cooperative of women who I’ve supported with my business," she says. "They’re well known for their beadwork, along with vibrant, colorful fabrics, which are used to create very dramatic adornment for the tribal women."

A photograph of three women, taken by Deacon’s good friend Annette, hangs to the left of the handiwork, depicting three Masai women in full beaded dress. 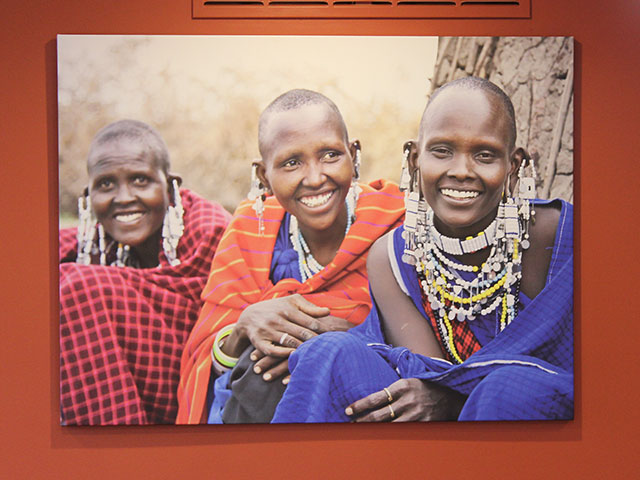 In a nook near the back of the restaurant, she points to a fabric painting, depicting West African women fetching and carrying water from a well, balancing vessels atop their heads. The piece, she said, was made by her friend Rosine and given to her as a wedding gift.

We turn about, and Deacon leads me to the eastern wall of the restaurant where three West African masks hang adjacent to a photograph of a Jamaican man.

"The masks are symbols of good fortune," she notes. "The lowest one represents fertility … prosperity in every sense, in life, in love, in business." 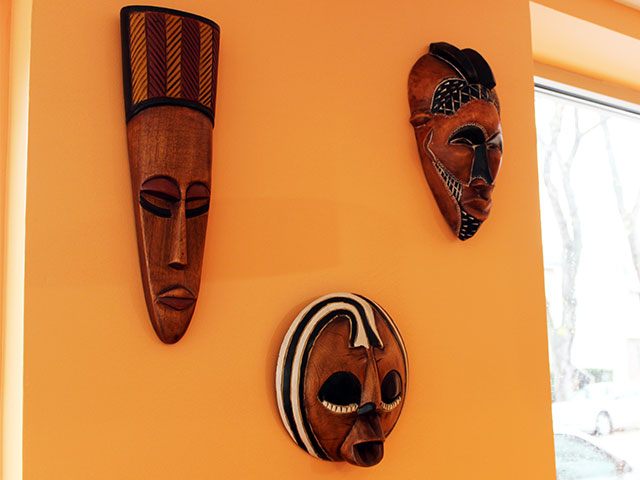 Not every piece of decor had made it to the walls at the time of my tour. But, Deacon eagerly unpacked a few items from boxes, including a series of fabric paintings, one of which featured a Zulu woman adorned in native dress. 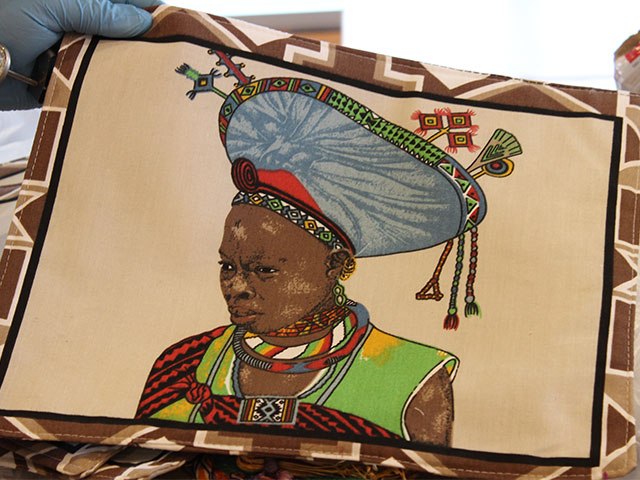 The pieces would hang in the hallway, Deacon noted, each representing a native tribe of Africa and the cultures from which Irie Zulu’s food is derived.

Our final stop brought us to the front of the restaurant, where we stood under a recreation of a large wooden shack, emblematic of the ones manned by Jamaican merchants, who stock and sell common pantry staples for use by the local people. Deacon points to bits of fabric woven into the repurposed wooden structure, along with two small cabinet-like doors, hanging along the edges. 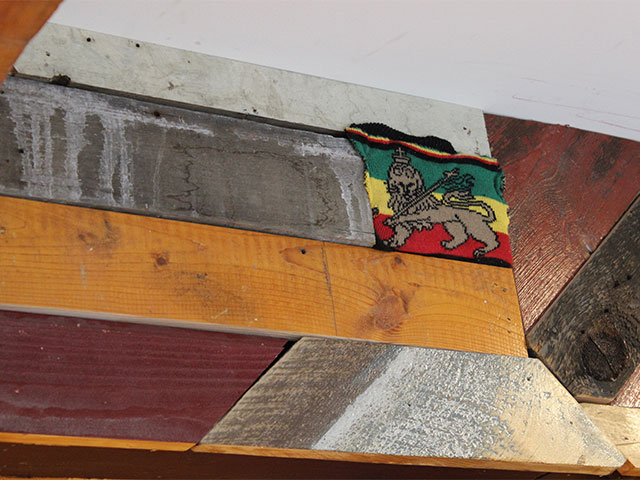 "The fabric is from my husband Mexton’s bandana, and a hat he wore during our first trip to Jamaica after we got married," she says. "It’s a symbol of how everything is used in Jamaican culture, and nothing goes to waste.

"And the doors," she goes on, "are the windows of the shacks that the Jamaican merchants open in the morning … and they represent the fact that we are always open for business." 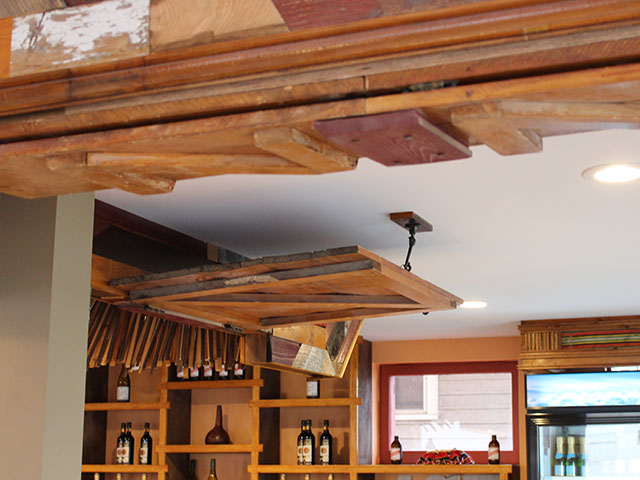 A last glance falls to the west wall, where strips of striped fabric are displayed along the ceiling between strips of decorative wood. 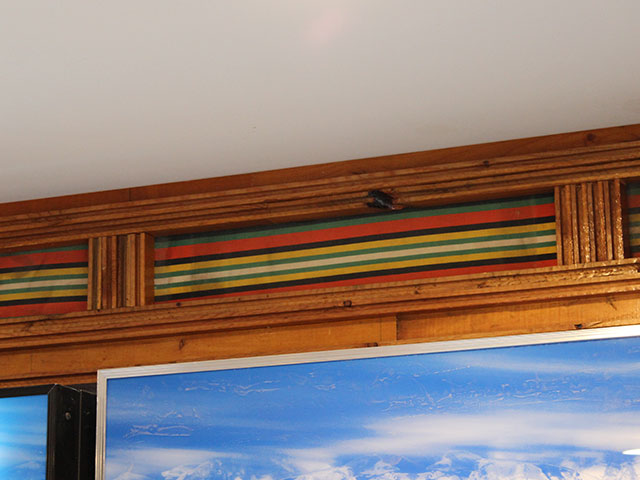 "Those are curtains from the bridal shop that was here before me – where I bought my wedding dress – and wood from cabinets that were here," Deacon explains. "We’re creating something new here, but we are also keeping the old still alive."

I smiled at the thought. And then I sat, slightly still for a moment.

In less than one hundred steps, I’d traveled halfway across the world, on a journey created with intention and joyful remembrance. And that, as Deacon confirmed, was the point.

"I thought through every piece I put into the restaurant," she says. "Just like the food. Every plate I will give you to eat, every bite helps you to get to know and enjoy the culture of West Africa, of Jamaica. So, I thought, how do I give people something to see – an excerpt – something to think about, a piece of us?"