Urban spelunking: Malig's work is all around us

We often celebrate the work of famous architects. We know the names of Santiago Calatrava and Daniel Burnham, for example. But what of the folks who work in relative obscurity, designing the city around us from their desks at City Hall or the Municipal Building? Lately, I keep bumping into the name of Charles E. Malig, who - though he designed a couple public schools while in private practice - built many public buildings during his 38 years as a staff architect with the city's Bureau of Bridges and Public Buildings.

We often celebrate the work of famous architects. We know the names of Santiago Calatrava and Daniel Burnham, for example. But what of the folks who work in relative obscurity, designing the city around us from their desks at City Hall or the Municipal Building?

Lately, I keep bumping into the name of Charles E. Malig, who – though he designed a couple public schools while in private practice – built many public buildings during his 38 years as a staff architect with the city’s Bureau of Bridges and Public Buildings.

The unique Kilbourn Avenue Bascule Bridge (above), built across the Milwaukee River in 1929? Malig.

The even more stunning glass-y bridge across Cherry Street? Malig.

The fireboat station at the southern entrance to the Third Ward on Water Street and the Engine Company House No. 32 at 3920 W. Vliet St., with its elegantly tall, thin windows? Malig.

That little ward yard office building that is now part of Bel-Air Cantina on Humboldt (below)? Malig.

The former Johnson Emergency Hospital and South View Hospitals on the South Side? Both Malig.

The moderne Third District police station on Vliet Street (below)? You guessed it. Malig.

According to a historic preservation report prepared by the city on the First Ward Yard Office, while private firms had typically designed civic structures in Milwaukee, the Great Depression changed all that, leading city fathers to bring a lot of that work in-house.

The fact that Milwaukee’s civic buildings continued to have a consistent look about them is due in large part to Malig and his talent and longevity.

According to the report, Malig – born in 1879 – studied engineering and design before apprenticing at local architectural firms. Among them must surely have been the office of George Ehlers, for Malig is listed as "associate" on Ehlers’ plans for a turn of the century schoolhouse.

He landed his job with the city in 1911 and must have immediately begun working on the new wing of South View Hospital on 23rd and Mitchell, which went up the following year. 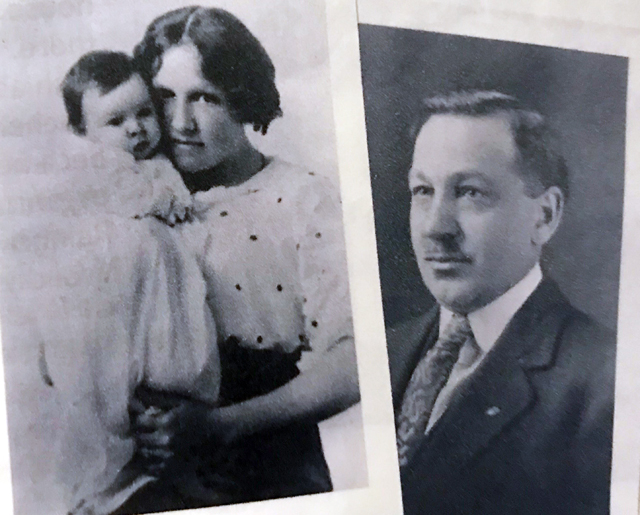 Malig and his wife Kate (seen in photos above with their daughter Kathryn, shared by Kathryn's granddaugher Katherine Baugh) settled in on North 51st Street in Washington Heights.

In addition to the structures mentioned above, Malig – during his tenure – was also responsible for nearly every police and fire station, the Matthew Keenan Health Center on North 36th Street, ward yard buildings, public restrooms and more.

He initially began working in a bungalow style (see South View) but later became a big purveyor of the de rigeur art deco movement, as is evidenced by the Downtown bridges, the Vliet Street police station and the high-pressure pumping station for MFD. He built five acclaimed bungalow style firehouses, in the city, too. As Malig aged he developed an appreciation for modernism.

According to another preservation report, this one from 2003, "City architect Charles Malig, with the Bureau of Bridges and Public Buildings, came up with a novel design for a low, residential scale building to house the fire engines and firemen. The brick veneered structures took on architectural detailing from the Colonial Revival and had the appearance of well-built, upscale houses. The Bungalow firehouse was the result. A number of these were built in the 1920's and several are locally designated under a thematic designation. The 1920's represented the high point of firehouse design."

Malig retired from his city post in 1949 at the age of 70 and moved to a home on 72nd and Burleigh in the Enderis Park neighborhood.

"Malig can be credited, along with his staff," notes the preservation report on the First Ward Yard Office, "for helping create the ‘golden age’ of municipal buildings in Milwaukee."