For the second straight season, Milwaukee Art Museum has tied together its major exhibitions into an overarching theme. Last time, with Winslow Homer and "Road Trip," the theme was "travel." Now, a trio of new exhibitions focuses on artistic technique and innovation.

For the second straight season, Milwaukee Art Museum has tied together its major exhibitions into an overarching theme. Last time, with Winslow Homer and "Road Trip," the theme was "travel."

Now, a trio of new exhibitions focuses on artistic technique and innovation.

"While these exhibitions span eras and a wide gamut of subject matter and techniques, they all showcase the vital role of invention and curiosity in the artistic practice and in shaping culture over time."

The first of the three shows, "Daring Technique: Goya and the Art of Etching," opened on April 20 and draws almost exclusively on works from the museum’s own collection, including an exceedingly rare complete first-edition set of Goya’s masterwork, "La Touromaquia," which traces the history of bullfighting in 33 images.

The exhibition, which is upstairs in the Bradley Family Gallery, opens with a gallery of works that inspired landmark Spanish artist Francisco de Goya’s entry into etching and aquatint and the broader world of printmaking.

"The beauty of prints is that they are so portable," says MAM’s Alfred Bader Curator of European Art, Tanya Paul. "They circulated easily, and so there's this wonderful cross pollination that can happen between artists."

From these works by the likes of Antoine Watteau and Seymour Haden, Goya would get a glimpse of changes in printmaking. 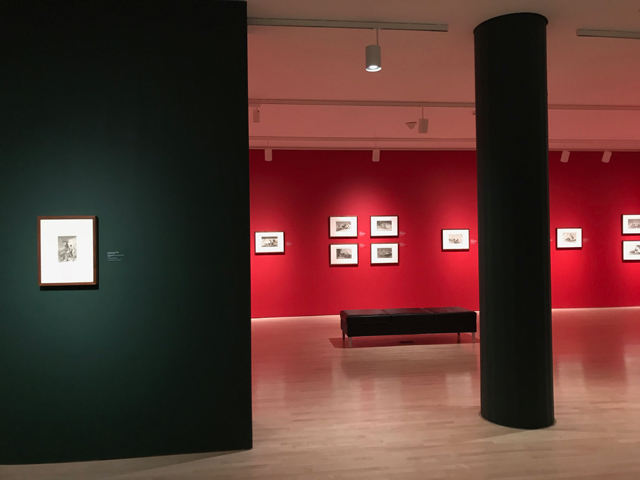 In the following two galleries, painted in starkly contrasting colors, we see, first, a selection of prints from Goya’s 80-print "Los Caprichos" series, and then, the complete "La Touromaquia."

"Los Caprichos" is, says Paul, one of Goya’s most famous, and infamous, series.

"He's creating this set at the time when Spain is in the midst of this enlightenment. And so you have this opposition between wealthy and poor, between religious and not religious, and you have this wonderful opposition and this lack of rationality which he is depicting in his prints. He's playing on Spanish superstition, so there's like boogeymen that appear and all sorts of allusions to different classes in society, that sort of thing.

"So these prints are in a way a criticism of Spanish society at the time. But there are very oblique criticism."

In the series, we see Goya’s adoption of aquatint, which he combined with etching, to create contrasts in tone and in texture, giving his prints a sometimes ethereal quality and, at the same time, alluring depth.

He went further still in "La Touromaquia," which was no less risky for the artist.

"This is during the period when Napoleon invades, and the French are at war with Spain," says Paul, "and so this sense of Spanish identity was really important. So this was indeed very much a political statement."

Tracing the history of bullfighting, a thoroughly Spanish tradition, Goya offered less common takes. The bull, rather than the bullfighter, is often the center of attention in the works, and one senses a sympathy for the bovine. 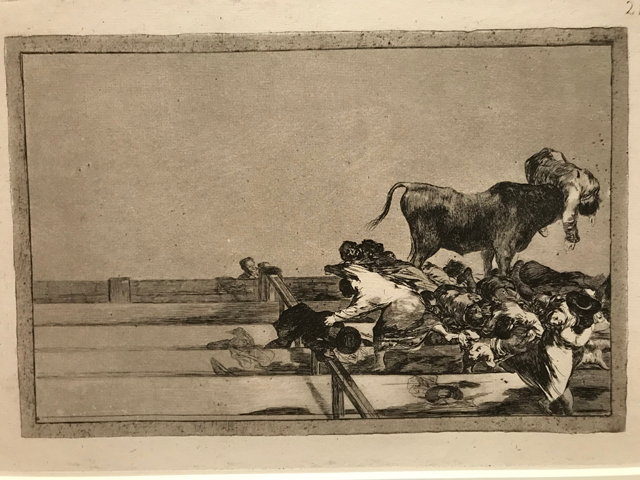 "There's this fabulous modernism to these prints," she says. "The title of this one (pictured above) is, ‘The Dreadful Events in the Front Rows of The Ring in Madrid and Death of the Mayor of Torrejon.’ and you have what must have been a very infamous tragedy and look at the way he's arranged the composition.

"Everything is sort of squished down in the right-hand corner. There's this awful, gruesome scene, you can see the horns of the bull (poking) through the man.

"And, then, you've got just nothing happening over here. You have the register of the stands and the empty space. So, there's this really interesting push and pull in the image and it's incredibly modern."

In another image (pictured below), a shadow represents the bull and bullfighter as a single, striking entity. 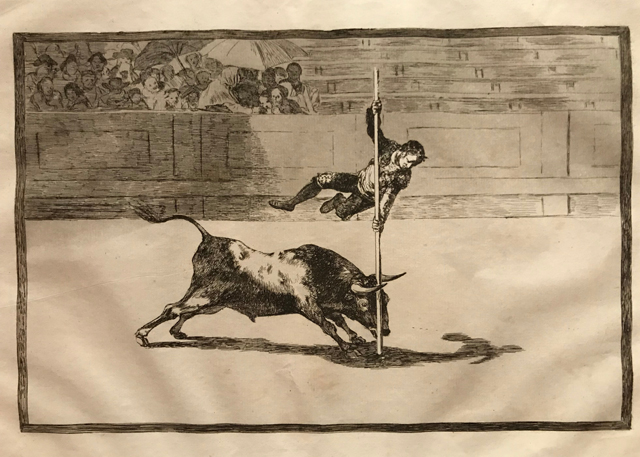 The fourth and final room shows Goya’s influence on future artists, from Manet to Picasso to Dali.

"You have these three artists who are looking at Goya," Paul says. "In some cases quite directly. There's this really interesting connection and continuum that occurs.

"I think Goya really rewards close looking and rewards coming back and looking again, so it's the kind of exhibition that I think people will really benefit from coming back to."

So, even if you go see Goya now, you should go take another, closer look when the other two "artistic technique and innovation" shows open.

The museum’s director of marketing and communications, Amanda Peterson, says the connection between these exhibits might not seem immediately obvious, but that the links are uncovered through discussion among the curators.

"What I really love is that no one would look at those three and go, ‘Oh, there's a really clear theme.’ But as you talk to the curators, they talk passionately about the technique," says Peterson.

"This one was actually a really easy season to look at and go, ‘Wow. This mastery.’ And comparing Goya to Kentridge, they’re really taking these same kind of political but unpolitical stances. So, that will be a really interesting contrast."

Full details on the opening and closing dates of the exhibitions, and related programming, can be found at MAM.org.

Also note that while the museum is closed on Mondays, it will once again be open seven days a week, from Memorial Day to Labor Day, so you can enjoy MAM that much more all summer long.