Art museums cultivate relationships with collectors, whose passions museums can help share with the larger community. Milwaukee Art Museum explores and celebrates those relationships in its new exhibition, "Milwaukee Collects," which opens today.

As anyone who visits an art museum and reads the descriptive labels knows, these institutions rely heavily on the largesse of art collectors, who often loan and sometimes gift great works to museums around the world.

Thus, art museums cultivate relationships with collectors, whose passions museums can help share with the larger community. This is true at Milwaukee Art Museum, too, of course, and the museum explores and celebrates those relationships with area art aficionados in its new exhibition, "Milwaukee Collects," which opens today and runs through May 21 in the Baker/Rowland Galleries of the Santiago Calatrava-designed Quadracci Pavilion.

You can see it for free on Sunday, March 12 when the admission to the museum is free all day thanks to Friends of Art.

The show includes nearly 200 works in a variety of media – painting, photography, decorative arts, etc. – lent by 46 Milwaukee collectors, many of whom have had longstanding relationships with the museum. As always, a range of related event programming augments the exhibition. 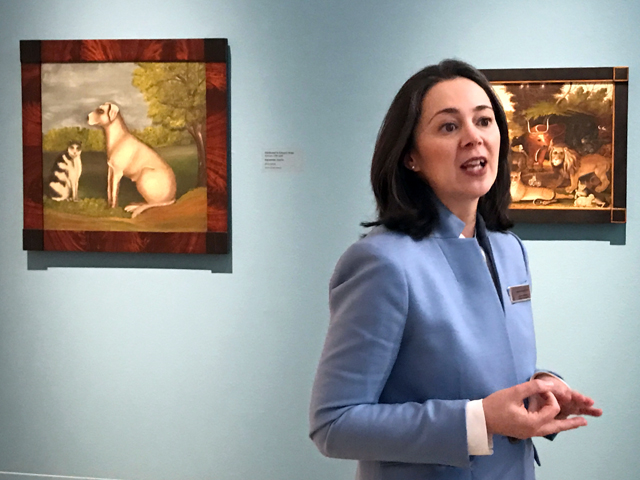 "‘Milwaukee Collects’ is an idea, as you might imagine, that really is about celebrating local collecting in our community, but it emanates from a larger strategy that we have as an institution for really being able to paint in the public imagination the story of how our permanent collection grows over time as a museum," says Marcelle Polednik, the museum’s Donna and Donald Baumgartner director (pictured above).

"We started with a list of about 80 collectors and then we whittled it down – obviously there's only so much room in this space – celebrating the ones that we know about, learning about others that we may be less familiar with and ultimately galvanizing a love of collecting, and an interest and passion for collecting in new generations in our community, because clearly we want to continue and nurture the relationship that we have with local collectors."

To create the show, the museum’s entire curatorial staff connected with collectors and went out to see their collections. Then they worked in concert to pull together the roughly 190 works you see in "Milwaukee Collects."

"Fortunately, as I'm sure you all know, we have a tremendous group of curators at the museum who were willing and able to take this project on, and to do it in a very collaborative fashion," Polednik says. "This really has been the work of the entire curatorial team."

What’s most striking about the show is the variety and quality of work that resides in the homes and offices of some Milwaukeeans. Included are works by the likes of French poster master Jules Cheret, pop art pioneer Roy Lichtenstein and photographer Edward Weston, as well as Thomas Sully, Ed Ruscha and John Sloan, among many others. 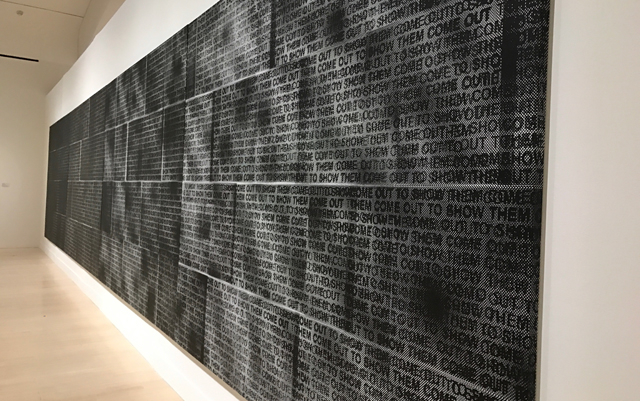 A few of the works may feel familiar, having been lent to the museum for specific exhibitions in the past, but most are on view here for the first time.

Some of the most striking are Jules Breton’s painting "Elodie with a Sunshade: Bay of Douarnenez (Woman with Parasol)," with its explosion of color; Jeremiah Paul's "Manumission of Dinah Nevill," a rare look at the official freeing of a slave; Erika Rothenberg’s playful and cutting "Another Century of Progress" church signboard (pictured below at right); Glenn Ligon’s sprawling, wall-sized "Come Out #5" text-laden silkscreen (see above); and Sophie Calle’s "Purloined (Picasso, Head)" which will have you seeing double, since it is a photograph that includes Jean Dubuffet’s portrait "Louisette Vicaire au renard de profil," which is displayed right next to it. 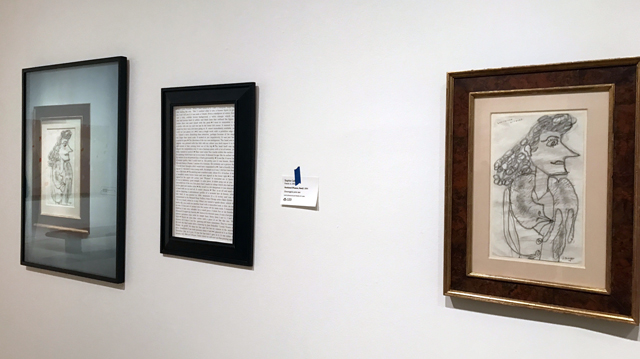 "Many visitors will walk through here and say, ‘I've seen that work before,’" says Margaret Andera, MAM’s adjunct curator of contemporary art. "It doesn't have to be, ‘This is the one shot that we have at showing work from the community.’ We have things on loan from local collectors all the time." 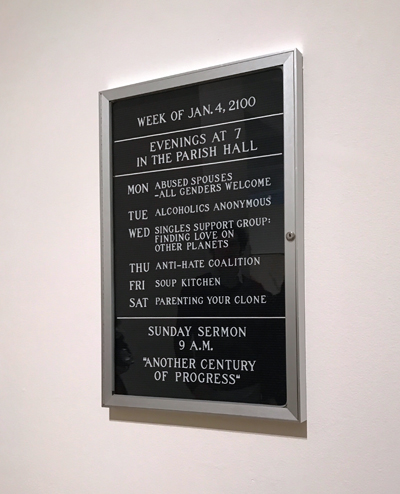 In addition to cementing relationships with long-lived partnerships between the museum and area collectors, the show also allowed the museum’s curators to get to know some of the newer, perhaps younger, collectors who have emerged since the last time MAM hosted an exhibition like "Milwaukee Collects" about 30 years ago.

"The hope is we're also learning about new collections that are not part of this display," says Polednik. "That was very intentional on our part, to also announce our interest in developing new relationships with collectors."

"There were a few younger collectors, but we knew about them, by and large," says Andera, about this process. "One was bit of a surprise, I think. But in the process, we did discover others. So that will be part of the follow up after this exhibition ends: collections that aren't represented in this exhibition, but that certainly will be on our radar now. We'll start building relationships."

Andera says she was encouraged by the landscape of the collecting scene in Milwaukee today. It reflects passion, of course, but also more than ever, new approaches to collecting than curators might’ve expected to find 30 years ago.

"I think what's really interesting is that the way people are collecting things," Andera says. "It's not traditional; not necessarily, ‘We're going to the auctions and we're going to buy something from the auction.’ It's a lot of buying from local galleries. Buying from local galleries when traveling in other cities. It's easier now than 30 years ago to keep tabs on the art world because of the internet.

"People have a better understanding of the types of works they're interested in, which artists they're interested in. So it's kind of easier to have access to them in that way. It opens up people's options. It's not as tightly controlled because you don't have to go to those places. You can go to art fairs, like the flourishing art fair business for the last couple decades. Even things like charity events. In New York, you'll see school (fundraisers) where well-known artists have donated a drawing. With the internet you can have access to all of that. So people are smarter about how they collect."

Ultimately, "Milwaukee Collects" serves a dual purpose. As an engaging assemblage of works that will draw in visitors, it surely seems like it will work. There is a wealth of great art on display.

Then there are the collectors.

"One of the things that is incumbent upon us as the largest collecting institution in our community is to make sure that we're doing our part to support collecting interest in the moving forward," says Polednik.