It's been four days since Monday Madness, when Milwaukee-based social media was set aflame by rumors of Shaka Smart's hiring by Marquette University. Tweets were delivered - and re-tweeted - furiously, and the day ended with camera crews camped outside of the Al McGuire Center on the Marquette campus with nothing to film.

March 24, 2014 won’t soon be forgotten by many, especially those who cover sports in Milwaukee.

It was a day when Milwaukee-based social media was set aflame by rumors of Shaka Smart’s hiring by Marquette University. Tweets were delivered – and re-tweeted – furiously, and the day ended with camera crews camped outside of the Al McGuire Center on the Marquette campus with nothing to film.

It would have been easy to jump on everyone involved, from traditional to non-traditional to student outlets – and I admit I have had some fun on my own Twitter account with it all – but it wouldn’t be fair to just say everyone just made stuff up.

There’s no way WTMJ radio sports reporter Doug Russell and the Journal-Sentinel’s Marquette beat writer, Michael Hunt, tweet what they did without reason: 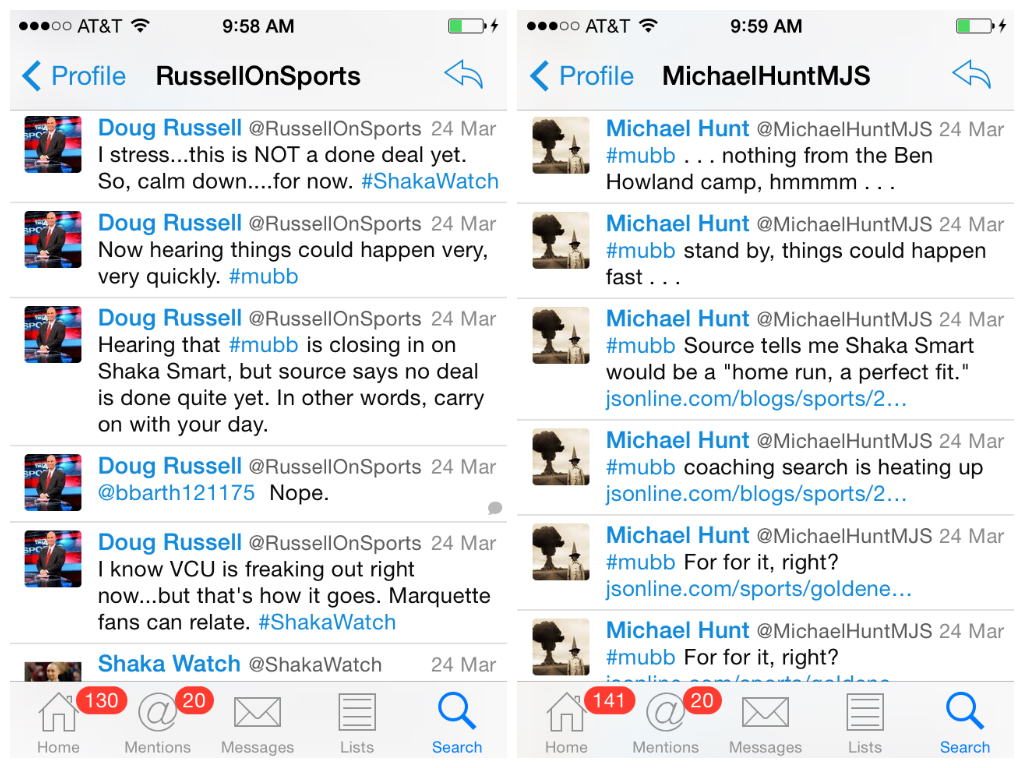 No veteran and respected television sports reporters go public with what they did without reason.

This was proven on Tuesday, March 25 when WISN Sports Director Dan Needles and FOX6 sports anchor Tom Pipines stood by their initial reporting that Smart was indeed, going to be the coach at Marquette as of Monday night.

If you believe in your sources and reporting, that is what you do.

Needles addressed the topic first thing on Tuesday, March 25 when he took to the air with 540 ESPN Wisconsin co-host Drew Olson.

"I’ll stand by my source. Absolutely. If you can find a better source, go ‘head," Needles said. "It sounds as though things could be … maybe he had a change of heart, I don’t know. But from everything I know he agreed to become the head coach at Marquette last night and was going to be coming to Milwaukee."

Pipines took to Twitter to do the same thing:

What does that say?

It says all of these guys weren’t chasing Tweets.

Somewhere, behind the scenes, between phone calls and texts, the story changed on them.

In the end, were they all wrong? Yeah, they were wrong. And that’s going to linger. And I know it stings.

But the story didn’t end there.

On Wednesday, March 26, the Marquette student who was in the center of much of the Twitter conversation, Mike Cianciolo, issued an apology for diving into these waters.

On Thursday, March 27, the university called a press conference with interim athletic director Bill Cords and the reason for that, said Marquette's Associate Athletic Director/Communications Scott Kuykendall, "was you guys, OK. We’ve had a good relationship. I’ve had a lot of requests over the last couple days to talk to Bill. Is he going to be able to answer all the questions you want today? No. Is that frustrating? Yes, I get that. But we wanted to get out in front of you. We had the president (Michael Lovell) yesterday and we wanted to get what we could, and Bill will address what he can. And what he can’t, we’ll move on. I appreciate everybody being here."

About four hours after that gathering, CBSSports.com reported Smart will not come to Marquette.

So, here we are on Friday.

Marquette doesn’t have a head coach. Twitter is still running wild (just check out the #mubb feed) and there are a bunch of Milwaukee media types licking their wounds.

But I know them. They’ll go about their job the same way, and if they’ve followed their in-house protocols about anonymous sources, they’ll go public with it and report it.

We all use sources. We all have different standards about when (or if) we can go with them publicly. It’s a vital part of this business.

After 21 years, Vince Vitrano is leaving TMJ News for radio