No, Matthew McConaughey is not moving to Milwaukee

Milwaukee-based fans of Matthew McConaughey thought they woke up to an Easter miracle today, as an article claiming the Oscar-winning actor was moving to Milwaukee began circulating around the web. But (not so) surprise: That's straight-up fiction.

Milwaukee-based fans of Matthew McConaughey must have thought they woke up to an Easter miracle today, as an article claiming the Oscar-winning actor, Lincoln ad star and bongo enthusiast was moving to Milwaukee began circulating around the Internet.

According to the SUPER legit-looking and VERY trust-worthy website The Lopez Report, McConaughey said that, "I'm not giving up on my career; just looking for a change in life and I think I’ve found it in Milwaukee." The article also quotes McConaughey as saying, "I just want to slow things down a bit and get away from the crazy, hectic life in L.A." – an impressive statement considering McConaughey, his wife Camila Alves and their three young children, by all other reports, already moved away from L.A. to live in Austin, where the actor grew up and went to college.

Also impressive: the amount of other celebrities – word for word – "not giving up on my career; just looking a change in life" and who think they found it in random towns across America. 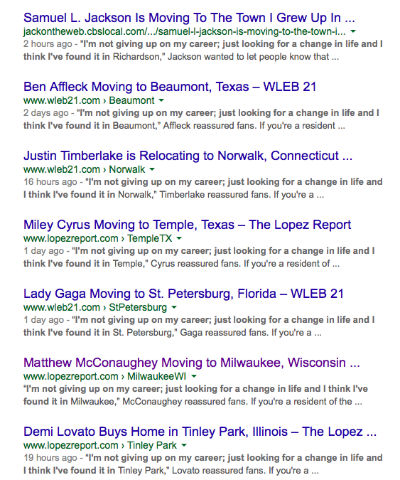 Indeed, Easter is also an early April Fools Day, because that stuff is straight-up fiction.

I know, hard to believe that a fraudulent three-paragraph scoop would wind up on such a reputable-looking site like The Lopez Report – which shares a more than passing resemblance to The O'Reilly Post, which this month posted its own three-paragraph scoop about Matt Damon moving to Madison, "looking for a change of scenery and a change of lifestyle." Which, conveniently enough, was exactly what the actor said when he most definitely did not move to Omaha, Nebraska earlier this month.

Of course, none of that obvious evidence of tomfoolery – or, say, the website's own description, calling it "a fantasy news site" where "all news articles ... are satire or pure fantasy" – stopped plenty of people from earnestly and therefore tragically commenting on the McConaughey piece, welcoming him to the community and recommending neighborhoods for him to move to. Valuable advice he will almost certainly never, ever need – but very kind of you all to offer the help!

The lesson here: Maybe take crazy-sounding reports from cheap, shady-looking websites with, I don't know, a grain of salt. What's next: A report that the star of "Family Guy" randomly performed at Lucille's? Wait, that actually happened? The world is confusing.