Starting Jan. 11, the Milwaukee County Historical Society, 910 N. Old World Third St., will be drenched in beer. Beer history, that is. The museum hosts "Brew City MKE: Craft, Culture, Community," a comprehensive look at brewing and beer in Milwaukee from 1840 to the present.

Starting in January, the Milwaukee County Historical Society, 910 N. Old World Third St., will be drenched in beer. Beer history, that is.

The Downtown archive and museum will host "Brew City MKE: Craft, Culture, Community," a comprehensive look at brewing and beer in Milwaukee from 1840 to the present, encompassing the beer barons, the big four brewers, Prohibition, beer advertising, the rise of Sprecher and Lakefront, and the explosion of craft brewers, too. 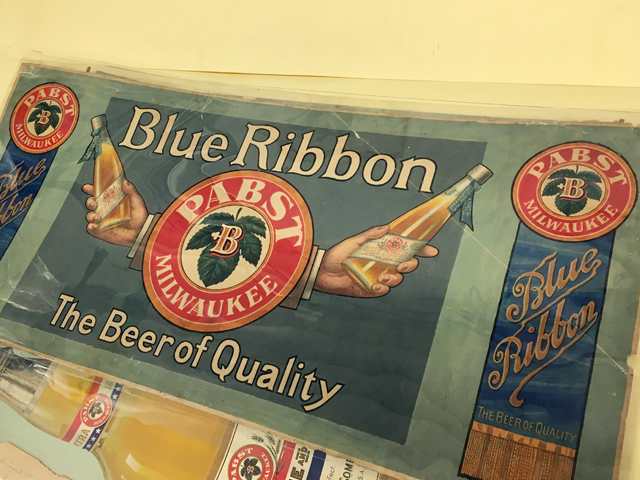 The exhibit opens Monday, Jan. 11 – with an opening celebrating three days later – and runs through April. A scaled-down version – required by the reality that MCHS needs the funds derived from using its building part of the year as a rental for weddings and other events – will remain on view through August.

"We've got a lot of buzz around this exhibit," says Executive Director Mame McCully, who says that from here on out MCHS will continue to host events from May through autumn, and then will feature bigger exhibitions, like this one, during the winter months.

The building typically houses smaller, rotating shows on its main level throughout the year.

"It's exciting to have people excited for what we are working on. I think that's been wonderful," says. In a release for the show, which MCHS says is the first of its kind on this scale in Milwaukee, McCully said, "From stalwarts like Miller and Pabst to relatively new faces like Sprecher and Lakefront – and many, many other brewers – Milwaukee is the city we know today because of the beer industry. We look forward to sharing the history of brewing and beer as it relates to this city." 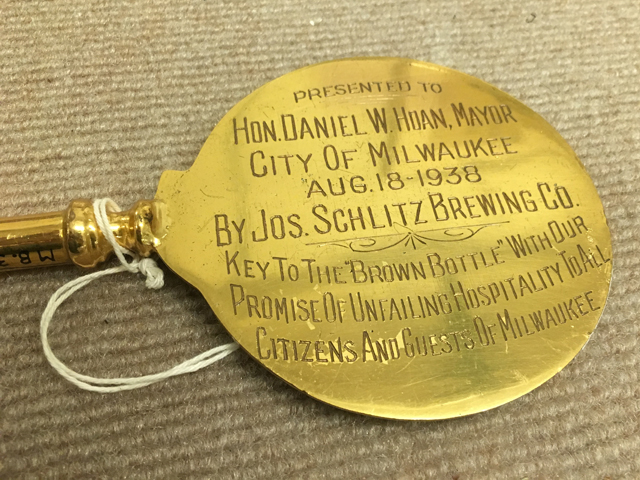 A key presented to Mayor Hoan to commemmorate the opening of the Brown Bottle at the Schlitz Brewery.

The exhibition, which will engulf the entire building and will require the installation of about 400 linear feet of temporary wall space that will be lined with photos and other images, text panels and exhibit cases, according to curator Ben Barbera, who has been working on the show since he joined the MCHS staff about a year and a half ago.

"Brew City MKE" will draw heavily on the impressive collection of beer-related objects among the 50,000 pieces in the museum’s collection.

"In the ‘30, ‘40s and ‘50s, we got a lot of stuff donated," says Barbera. "And then, one of my predecessors, Mike Reuter spent a lot of time organizing the collection. We may have other collections that are as big, or, similar in scope, but this one is very well-organized. I know exactly what we have."

And it has wow factor.

"I could pull out 30 or 40 wedding dresses or something like that, but that's not nearly as interesting to most people."

In addition to the thousands of beer bottles, cans and labels, the museum collection includes objects like barrels, advertising lithographs, portraits of beer barons and more. One of the most exciting is a set of 10 blue ribbons that Pabst won (for its draught horses, not its beer) at the 1904 World’s Fair in St. Louis, in the heart of Bud territory. Another memorable one is an 1871 Gettelman beer wagon. 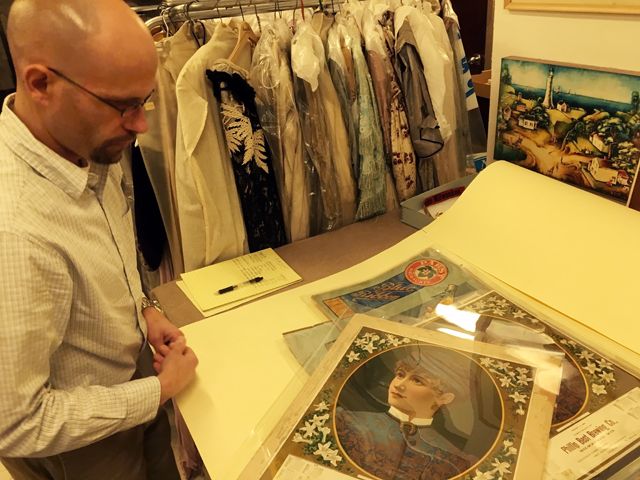 Ben Barbera sorts through the MCHS collection of beer-related lithographs.

Miller, the Pabst Mansion, Milwaukee Brewing Co. and a number of private collectors are also lending items for the show.

One of the vaults in the building – which is a former bank – will be converted into a beer "cave," for the show and a board room upstairs will masquerade as a brewery exec’s office.

McCully says the timing and setting of the exhibition seem appropriate, too.

"I don't think there'd be a better time, because, six new micro brews are coming by spring. I think Milwaukee is doing well with craft breweries, coupled with of course, Miller still in the middle of the city.

"And, this building was a bank built for the breweries. It was called the Brewer's Bank. Pabst, Schlitz, and Blatz kept their money here at the time. I just think it's an amazing place to also have the exhibit, because, it was built for beer money."

"Beer City MKE" will host a wide range of events in tandem with the exhibit, from lectures to a ladies night to a beer cocktail event and more.

"I think the community demands more than lectures now, which, the libraries and the historical societies are expected to do very academic events," says McCully. "We'll have a few things, like, a panel discussion or a book talk. Although, I'd like to think the events will be a little spicier than that. Then, we'll also stay open late a few times for happy hour. "

McCully’s goal is to really show off the Milwaukee County Historical Society and reposition it in the consciousness of Milwaukeeans.

"I think this is a major thing for the historical society. Our goal is to become, and, be, Milwaukee's place for celebrating Milwaukee and our history."