At long last, former McKinley School gets a potential lifeline

Just when all hope seemed to have faded, hopeful news for the future of the former McKinley School, 2001 W. Vliet St., has arrived.

Just when all hope seemed to have faded, hopeful news for the future of the former McKinley School, 2001 W. Vliet St., has arrived.

MPS closed the school in the late 1970s and, soon after, sold the building to V.E. Carter, who ran a day care in the building until 2013, when it closed after a fire. (I've written repeatedly about the building, which I featured as part of the Department of City Development's This Place Matters campaign.)

Riddled with friable asbestos on the inside and with broken windows and bricks popping out of the exterior, the school – the oldest part of which dates to 1885 and was designed by Fred Seyring – appeared more and more doomed with each passing day. 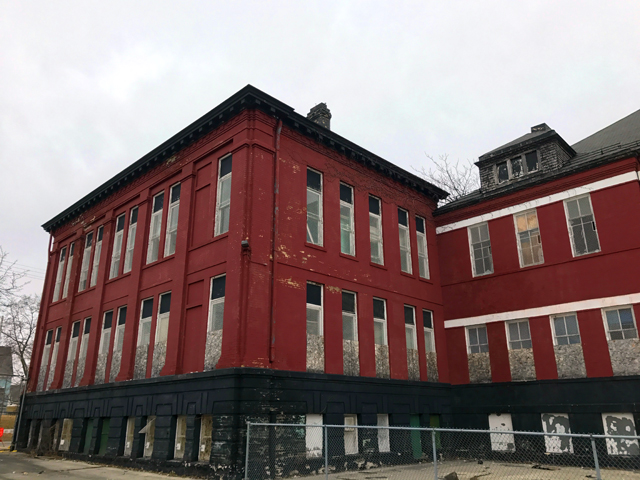 But on Monday night in the community room at Highland Gardens, just a couple blocks from the schoolhouse, Ald. Bob Bauman, Dave Misky of the City of Milwaukee’s Redevelopment Authority and Ted Matkom of Gorman & Co., presented a vision for a fast-track plan to save the building and convert it to senior housing.

The plan would separate the building from its large parking lot to the north and a small playground to the south, across a vacated section of McKinley Boulevard. The entire site is roughly two acres.

The city began foreclosure proceedings for unpaid taxes in 2013 but while that was working its way through the courts, an unknown person made a $54,000 payment toward those delinquent taxes, stopping the foreclosure action.

Bauman said that the site, however, continued to be a drain on Milwaukee Police Department and Department of Neighborhood Services thanks to complaints of vandalism, unlawful entry and code violations. 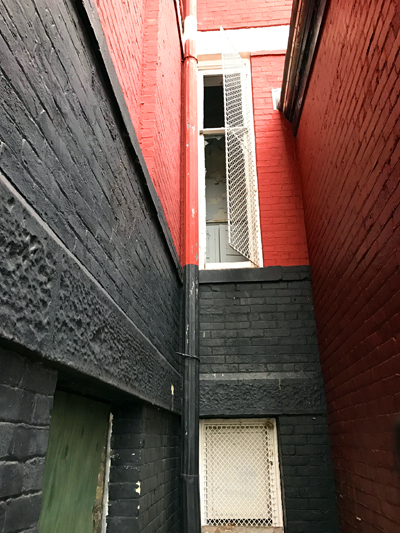 Continued tax delinquency returned the property to the foreclosure file and this time the action went through and the city took control of the site in 2016.

Gorman would create senior housing units along the lines of the ones retrofitted into the former Jackie Robinson Middle School/Peckham Junior High in Sherman Park and the ones currently in the works for the former Fifth Street School in Bronzeville.

There are 68 units in the Robinson building, which is bigger and boxier, and 58 are planned for the gable-roofed Fifth Street, the architecture of which is more akin to that of McKinley.

According to Bauman, there is no contemplation of new construction as part of the senior housing project, which would require Historic Preservation Commission approval for any exterior changes because the schoolhouse was locally landmarked in 2014. (Dear Gorman & Co., please restore the cream city brick exterior.)

The project is on a tight timeline, Bauman added, so that Gorman can file applications for a variety of tax credits required to make the plan a reality. Deadlines for those applications arrive as early as June. Issuing a formal RFP would delay the project with potentially fatal consequences for the unique building with its pair of matching hipped roofs and a later Neoclassical addition.

"If they get the tax credits, they proceed," he told a crowd of neighbors and city employees numbering about 20. "If the deadline is not met, we have to wait for the next cycle, which means the building could sit vacant for another entire year." 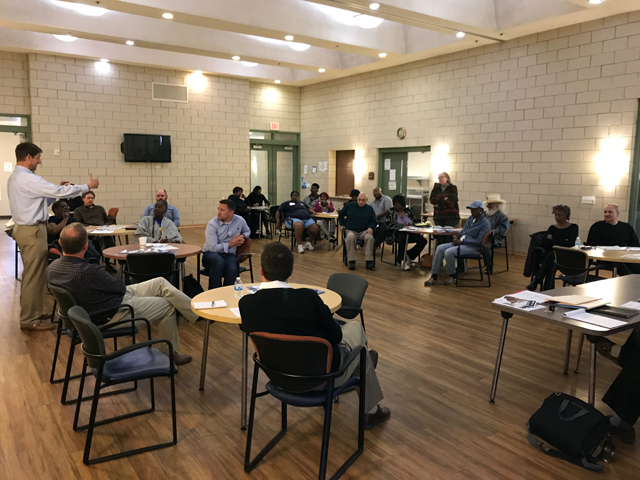 And, the building is rapidly deteriorating. Vandals have ripped out pipes from the interior, broken windows, graffitied the exterior and caused other damage inside. Nature has inflicted its own particular brand of pain, too. Time is not on its side.

However, thanks to work recently undertaken by the EPA, at the expense of the federal government and at the request of city officials, the asbestos in the building has been abated, according to Misky.

"The site has now attained a level of clearance and there’s an opportunity for people to see inside the building," he said. But the clean-up came with some conditions, which further underscores the need for fast action.

"Part of the deal was that the city needed to demolish the building immediately after the cleanup or come up with a longer term plan that had to be implemented immediately following the cleanup. Simultaneously, Gorman approached the city about the site."

Matkom said the McKinley site has been on Gorman’s radar for a while. 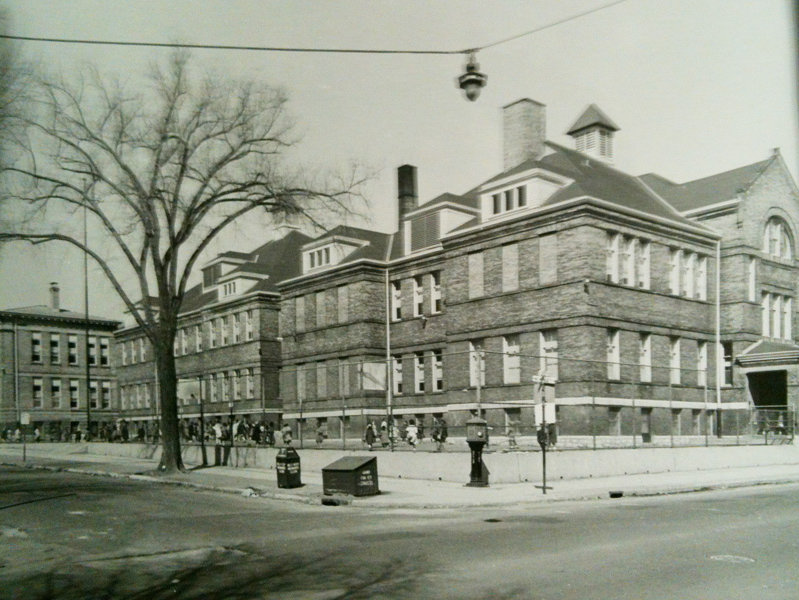 "I’ve always been looking at this property and saying we’d love to restore it and put senior housing in there," he said. "The demand is off the charts for that type of housing. We’re also doing Fifth Street School; (seniors) don’t want to leave their neighborhoods but they want to sell their houses.

"We’ve had a lot of success putting resources together for senior housing in these neighborhoods."

Matkom said a plan for McKinley would mimic the displays in the common areas that salute the history of the building and its neighborhood.

Neighbors at the meeting were eager to discuss options for the sea of asphalt to the north of the building, which is land that does not figure into Gorman’s plans, though Matkom appeared eager to work with the neighborhood on improving that part of the site. It hopes to move parking for the building to the overgrown former playground to the south.

Some of the ideas floated for the lot included a grocery store and/or other retail and services, which the neighborhood lacks, a community garden, single-family homes, a playground or park and solar panels.

One long-time neighborhood resident who attended McKinley School as a child said he’d like to see the building re-opened as a neighborhood school, though that seems about as likely as it becoming the next state capital.

Ald. Bauman suggested a charrette for the site to gather further neighborhood input and comment on a use – or a combination of uses – for the site, and Matkom added that Gorman would be willing to draw up theoretical renderings of how different uses might look on the property.

The next step is that the Common Council will act on a file Bauman has presented that would give Gorman control of the site for six months so that it can apply for tax credits. The applying developer – Gorman – must have control of the site in order to file applications. 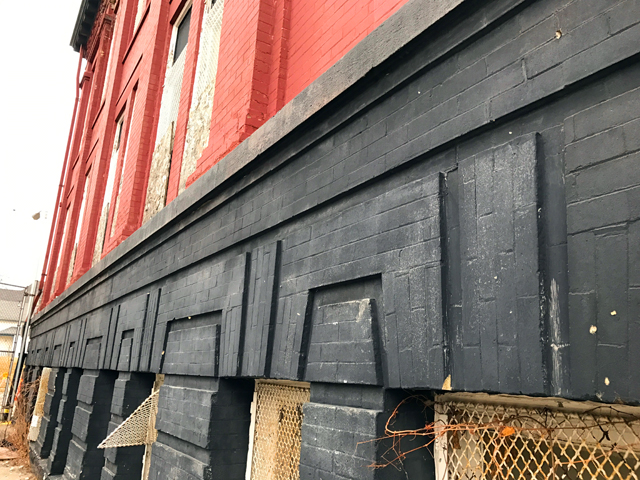 "I think the city is inclined to proceed," Bauman said.

If the applications are then accepted, Matkom said he expects that work on the project would begin in fall of 2018.

"That building was my mother and father’s dream," said Michael Carter, who attended the meeting. "I was glad to see that there is interest. It has great potential. My mother was very community oriented and it should be a community oriented facility."

At the end of the meeting Bauman briefly discussed concerns about the former Bethlehem Lutheran Church site, a few blocks west of McKinley School, at 2466 W. McKinley Ave. 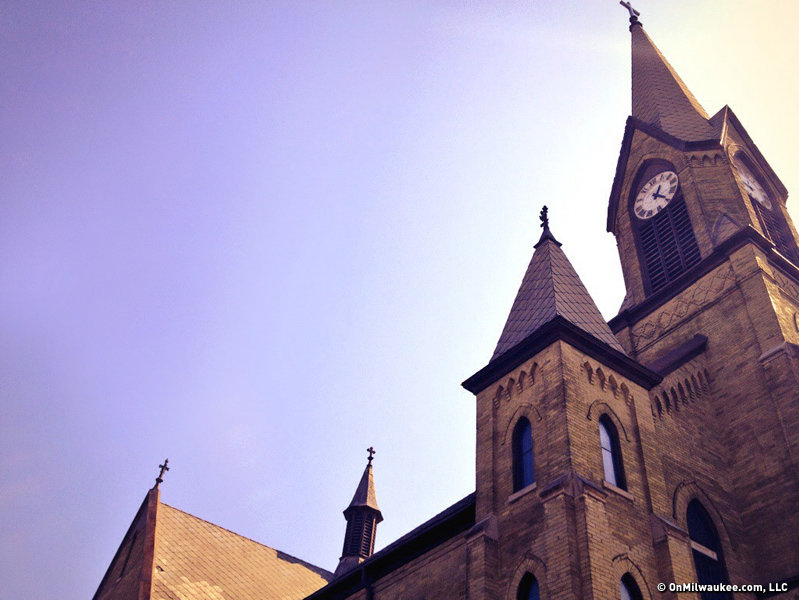 A resident called Bauman’s office, the alderman said, to report activity at what was believed to be vacant church and school buildings. There were also rumors that a homeless shelter or multi-unit residential development was taking place there.

Bauman reported, however, that there is no planned development. Trustees of the disbanded congregation have leased the site for a summer recreation program for children, he added.

"Something, I thought, at first blush, is a positive thing," Bauman said, emphasizing that there’s no development planned for the site on the city’s radar.

Any such uses would require zoning changes and couldn’t proceed without approvals.

"There will be no development on that site without public input," Bauman said.