To celebrate the second anniversary of its M*Card travel fare card, Milwaukee County Transit System says it's announcing "the most exciting giveaway ever" at noon on Wednesday, Nov. 16.

To celebrate the second anniversary of its M•Card travel fare card, Milwaukee County Transit System says it's announcing "the most exciting giveaway ever" at noon on Wednesday, Nov. 16.

The announcement will be made via a Facebook live on the MCTS Facebook page. In order to convince the media to look in, the system sent out these Wonka Bar-like packets.

I opened one and although I didn't find a golden ticket that would get me a tour of MCTS facilities and potentially result in my becoming the maven of Milwaukee transit, I did get a nice, weighty Hershey bar. 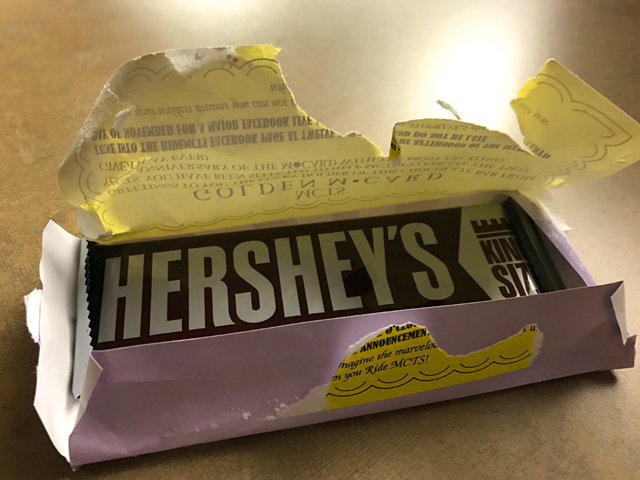 If you want to get in on the giveaway, watch the Facebook live tomorrow at noon for details.

In the meantime, MCTS introduced the M•Card in 2014 and the cards now facilitate 1.5 million rides each month. So far, the electronic smartcards have been used for 25 million rides on Milwaukee County buses.

The cards are available online and via 100 locations throughout the county.

Incidentally, the wrapper on the bars boasts, "In your wildest dreams you can not imagine the marvelous SURPRISES that await you when you Ride MCTS!"

Surely, they meant this awesome driver ...