A tale of three muralists: how public art invigorates Milwaukee

Public art is a part of our culture and has great impact on our community, both locally and widespread. Meet three muralists who have been instrumental in making this happen.

Like clay, we are molded by our culture and fired by passion to become lustrous members of society. And undeniably, public art is a part of our culture and has great impact on the community, both locally and widespread.

Perhaps you remember the "Milwaukee Monster Mural" that resided on the facade of a building on the corner of 1st Street and Pittsburgh Avenue for eight years. This mural unofficially marked the entrance into Walker's Point, a diverse and artistic community, and became a symbol of the neighborhood. 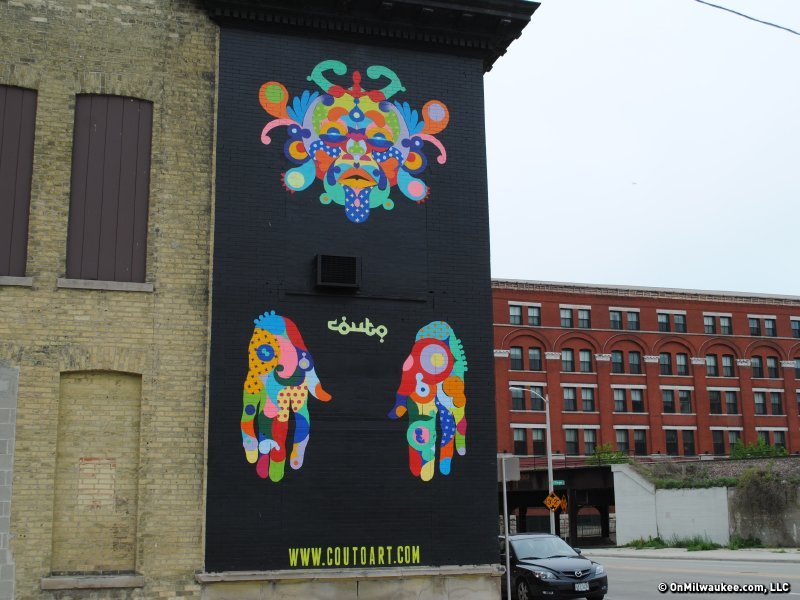 Created by siblings and artists Alex and Chris Couto, the Milwaukee mural was influenced by the cultures of Brooklyn and Brazil. Their work uses historical and social themes conjoined with bright colors and patterns to offer new perspectives. Other times, their work is experimental and focuses on form rather than meaning.

"Both subconsciously and consciously, art makes an impact without viewers even knowing. It changes perceptions," say the Coutos.

While the brothers' mural is no longer in existence, the positive impact it had remains by inspiring more murals to be created in the neighborhood and beyond.

Not far from the Monster Mural’s former location, the "Westown in Bloom" mural on Wisconsin Avenue went up this summer on the side wall of Dunkin’ Donuts. Created by local artist Emma Daisy Gertel, it was created specifically for that space and breaks up all the bricks, businesses and construction that is the bulk of the busy street.

"Westown in Bloom is meant to inspire hope. It represents the hard work, dedication, growth and abundance in our city," says Gertel. "I believe in the power of joy, spreading joy and that we should not discount nor take for granted the moments that make us smile."

Gertel, who is part of the Var Gallery collective in Walker's Point, is inspired by people and the natural world as well as the divides that exist among humans. Acceptance and identity have always been a struggle for Gertel, a Korean adoptee who often feels "in-between" two places or cultures, and she uses this as an inspiration in her work.

Gertel’s work also sometimes features culturally ambiguous female figures, playing with the ideas of identity and acceptance. Her painting "In Full Bloom" is an example of this and is one of the murals in Black Cat Alley on Milwaukee's East Side.

"People have stopped me on the street to tell me how inspired they feel by the work; how uplifted they feel by the colors," says Gertel. "People who work in that neighborhood have expressed how it simply brightens their day and puts them in a better mood. Public art is vital to communities and impact's people’s mood, culture, outlook and perspective of a place. It adds an inexplicable value that can inspire growth and development. It says we care about our community, that our community is worthy of time, attention and beauty."

"I understand the importance of gallery representation and gallery culture, but I also believe that art should be accessible to all," adds Gertel. "Sometimes, gallery work isn’t able to communicate on the same level street art can."