The key takeaway from Means' listening session: Is anyone listening to Means?

Despite setting out specifically to hear from the parents of families of the children struggling in the city's most challenging schools, OSPP commissioner Demond Means' target audience was not there, and those who were didn't seem eager to listen.

Perhaps you've seen the video, the one where State Senator Alberta Darling doesn't know she's on camera and says, "I think that (Milwaukee County Executive Chris) Abele's having a primary with Chris Larson; it's putting a little bit of pressure on him right now. I think after April we'll see more effort put toward our initiative."

The "initiative" she's referring to is the so-called Opportunity School Partnership Program (OSPP), written by Darling with State Representative Dale Kooyenga, which authorizes Abele, through a commissioner of his choosing, to select failing Milwaukee Public Schools to takeover from MPS. I have written about this many times, but if you're not familiar with the issue, you can start here.

The commissioner Abele selected is Demond Means, current superintendent of the Mequon-Thiensville school district. Means is a Milwaukee native, MPS graduate, strong advocate for what he calls "traditional public schools" and vociferous opponent of private school vouchers. He has current family ties to MPS and has long been recognized as an expert in closing the "achievement gaps" between white and minority (and rich and poor) students.

Means held a listening session on the OSPP, with the intention of connecting, he said, with parents and families most likely to have children in the lowest-performing schools in MPS. He wanted their input on what should happen in those schools and in any schools that he might bring under his oversight as the OSPP commissioner.

Darling's on-camera comments caught people's attention because Abele and Means both have insisted that their aim is to do as little as possible to disrupt MPS. The spirit of the law, though, is clearly to start peeling away buildings, students, equipment and possibly staff – but certainly funding – away from the district.

Abele has suggested the extent of the OSPP schools under his watch would be schools with three- or four-year-old kindergarten students, which would feed better-prepared youngsters into MPS's kindergarten programs. Abele has also said that he would not take any MPS properties.

During the listening session, Means would not commit to those exact, limited terms. But he made clear repeatedly that the original intent of the OSPP law – to move dozens of schools out of MPS and into the hands of other operators, leaving MPS decimated and perhaps bankrupt – was not his intent at all. He made sure we understood what a takeover is. It's "when you usurp the authority of the elected school board," he said, and "take their funds" and "disenfranchise the employees."

After the listening session, Means told me he knows that's what the law says he is supposed to do. "When you read it," he said, "it was written that way, so what I want to do with the development of the (request for proposal, seeking a partner to operate a school under his leadership of the OSPP) is to skirt that so that my definition (of a takeover) is not materialized, because that would hurt MPS.

"The way this plays out is the vision Chris and I put together," he said, assuring everyone that the publicly stated plan is the plan going forward. He added later, "I'm a Christian man; I'm not going to lie about anything."

Still, once the session got to the listening part, more than one speaker accused Means and (though he was not present) Abele of lying about their plans. But let me back up a minute.

Means started the session with a presentation, which opened with a recapitulation of his qualifications for the position. Just as he started getting into some specifics of how the law authorizing the OSPP worked, the Overpass Light Brigade walked in to interrupt with a "NO TAKEOVER" display.

Means' last words before the interruption? "I won't do anything to harm the people committed to the Milwaukee Public Schools as employees, or the system itself." 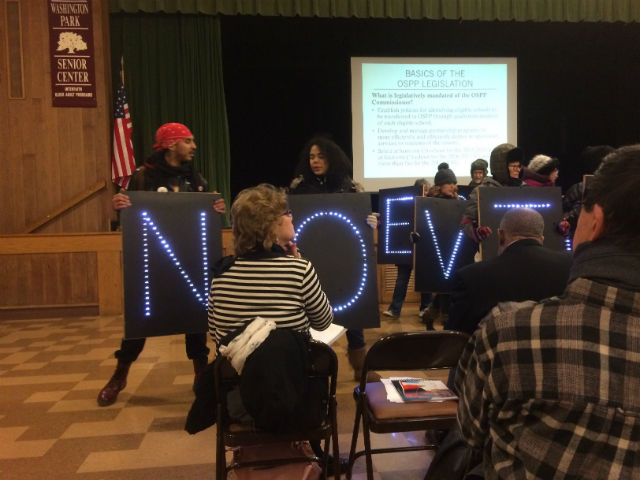 I couldn't help but note the irony as it happened on Twitter. I understand why protesters were there: They subscribe to the very reasonable (from my standpoint) "not one school" line of thought. The number of taken over schools, they say, should be zero. That the law exists at all is an affront to democracy, an usurpation of local control and an insult to everyone in the public school system who works, day in and day out, with the neediest of Wisconsin's children. It is unconscionable that two suburban legislators have hijacked what by rights should be a Milwaukee responsibility.

If I had my preference, the OSPP would not be a thing at all, and Darling, Kooyenga and their ilk would be helping MPS by fully funding the district's needs and helping the families in our city's (and state's) poorest zip codes.

But that's not reality. Reality is that OSPP is a thing, and reality is that Abele has agreed with the protesters: not one school.

It's also hard to argue that Means is far off from the protesters' call for "NO TAKEOVER." Even before he was interrupted, as part of his bona fides, he explained, "If you told me seven months ago that I would be working on this legislation, I would have told you that there was no way. I was one of the most vocal critics of what was happening with state funding in K-12 education."

"It's surreal to believe that I am a part of this world," he said. But when Abele called him, "I though about it long and hard. I accepted the opportunity because I felt I could not continue to sit on the sidelines as children and their dreams fail in our city. I said, 'I want to be part of the solution.'"

Means called what's happening in MPS a crisis on par with what happened with Flint, Michigan's water system. And he insisted that the solution was not to gut MPS or take over any authority that rightly belongs to another. "I want to be clear," he said, "there is only one superintendent in Milwaukee. And you have an amazing superintendent in Dr. Driver. I would never do anything to hurt the work she is doing."

After the protest, when it became clear that the bulk of the audience was not there for dialogue so much as they were to give Means an earful, he abandoned his presentation and just listened. Again and again, speakers accused Means of lying, giving credit for honesty instead to Darling, the woman who has Milwaukee's well-being as her last priority.

This baffles me. I mean, literally, I have no way to describe just how disturbing it is that otherwise smart people are taking Darling's word over that of Means, people who don't consider her biases or that she is likely engaged in simple fantasy.

This is not to say that the crowd didn't make any good points. They did, from challenging Means' reading of the law (he said he was obligated to "take over" at least one school every year, though the law does not say that) to reasonable questions about what Means' budget was. For the record, Means says he's currently doing this without a salary, in what I can only imagine is already an unbelievably small amount of free time.

The crowd also drew unfavorable to comparisons to the way takeover and recovery districts had been run around the country, to which Means responded he had studied what happened in New Orleans and Tennessee, among other places, and had no intention of replicating those disasters here.

Finally, there were repeated reminders for Means, who grew up on 38th and Center, what kind of challenges urban students and families face. I give Means a lot of credit for keeping his composure while an almost entirely white parade of speakers presumed to tell him what it is like to grow up poor and black in Milwaukee.

In the end, this is probably the most upsetting thing about Means' listening session. Despite setting out specifically to hear from the parents of families of the children struggling in the city's most challenging schools, his target audience was not there.

This is perhaps emblematic of many of the problems within MPS: Where we (and our students) most need families to engage, they are unavailable.

In the parking lot after the event, Means went on to say that he wasn't sure whether there'd be another listening session like this one. I don't blame him; he's not reaching his intended audience and taking, instead, a tremendous amount of flak from people who ought to be cheering his stance against legislative Republicans' destruction of public education.

Still, he told me, hearing from the protesters was helpful. "I get it. I understand why people are nervous, and so what I will continue to do with this RFP process is try to craft in a way where it doesn't exacerbate the concerns."

He said, "I'm trying to develop an RFP that would avoid some of the angst that's in the community."

I hear him, and I am encouraged by his commitment and tenacity. But is anyone else listening?

MPS considers a return to in-person learning at Tuesday meeting