Last year, we took you inside the Milwaukee Theatre (formerly the Auditorium) and the Arena to get a look behind the scenes at these local landmarks. This time, we dig into the archives to find treasures from events held in those venues.

Last year, we took you inside the Milwaukee Theatre (formerly the Auditorium) and the Arena to get a look behind the scenes at these local landmarks.

While there, I got a peek into a room stuffed full of seemingly countless scrapbooks of clippings from the Auditorium, Arena and old MECCA convention center dating back at least as early as the 1930s.

This time, we dig into box office manager Donna Hrobsky's archives to find treasures from events held in those venues. 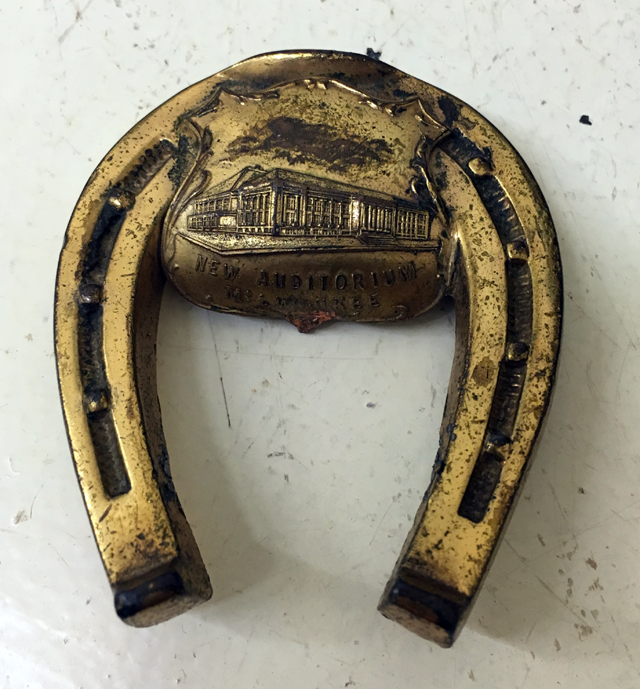 The Auditorium opened in 1909 to replace the Exposition Building that had been lost to fire. So this horseshoe bottle opener – with all the luck draining out the bottom – must date from not long after. 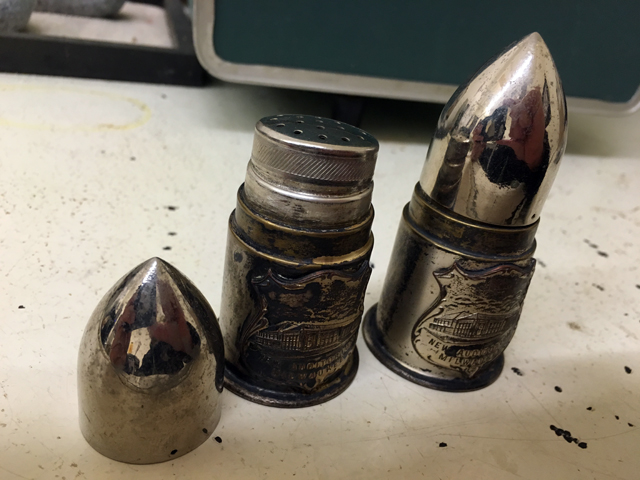 These also call the Auditorium "new" and, therefore, must date to not long after it opened. Is it possible these were meant to commemorate the attempted assassination of former President Theodore Roosevelt when he was in Milwaukee to speak at the Auditorium in 1912? 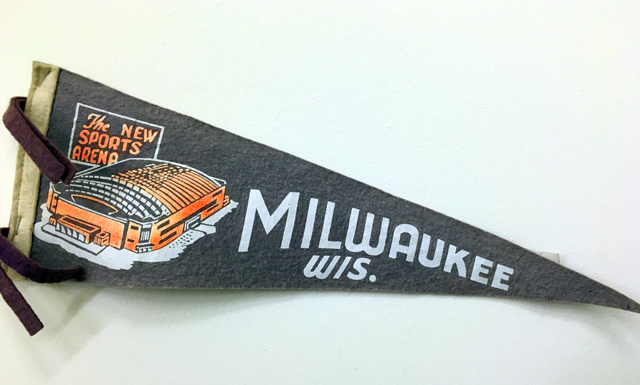 The Arena, on the other hand, opened much later, in 1949 and this pennant marks the occasion. 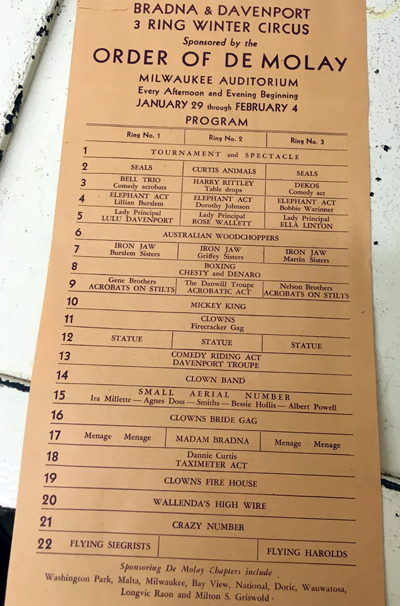 Orrin Davenport brought his circus – French-born Fred Bradna was already equestrian director for Ringling Bros. and Barnum and Bailey by then – to Milwaukee in 1932. Who wouldn't want to see Chesty and Denaro go at it with boxing gloves, or guffaw at the clowns doing the old firecracker gag, to say nothing of the Wallendas on the high wire or the intriguingly named, "Crazy Number"? 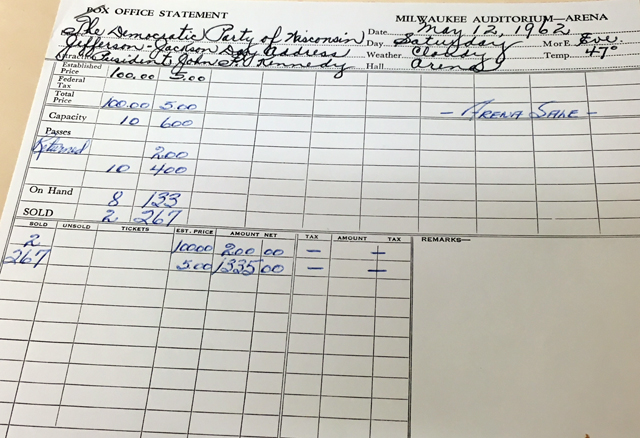 At the invitation of a number of Wisconsin Democratic leaders, including state party chairman Patrick Lucey, Kennedy came to Milwaukee to deliver a Jefferson-Jackson Day address, at this annual Democratic Party fundraiser that was renamed last year.

6. Photos of the Beatles at the Arena 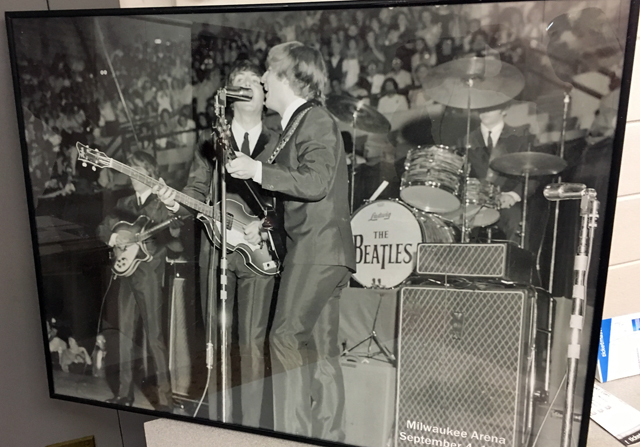 Milwaukee was rocked by Beatlemania in September 1964 and Hrobsky hit the internet to find some great images of the Fab Four on stage at what is now the UWM Panther Arena. 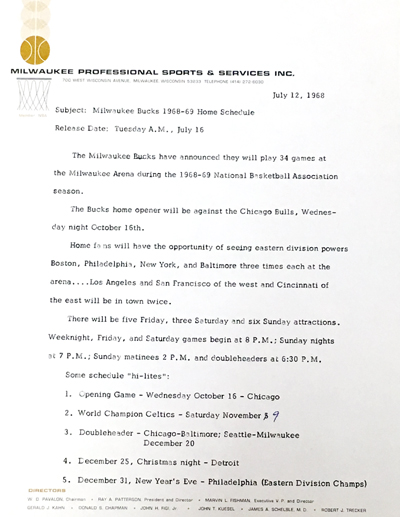 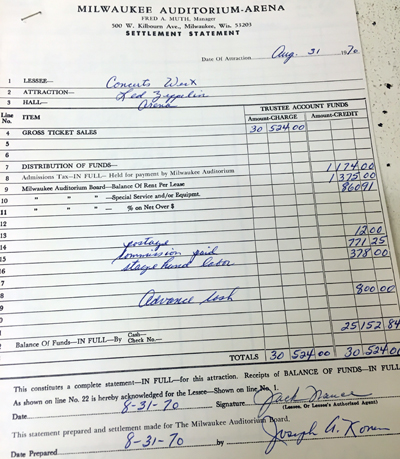 Tickets were $4, $5 and $6 and still Led Zep managed to rake in more than 30 grand at the Arena a few months before the release of "Led Zeppelin III." The band returned in 1973 and Hrobsky has paperwork from that gig, too, as well as a bootleg recording of the show found on eBay.

Just a reminder that if the artist wants some drums from Bob Kames, and a bank stamp, it'll cost 'em. Elvis returned in 1977 to play his final Milwaukee show and Hrobsky has those documents, too. 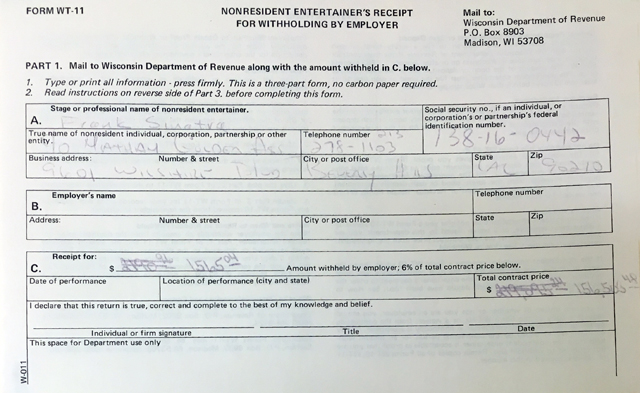 While Joe Strummer and Paul Simonon played with a band of hired guns next door as "The Clash," Sinatra was pulling a cool $156 large, for which the Arena folks withheld $1,565.04. Opener Buddy Rich earned $7,500 for his work that night. 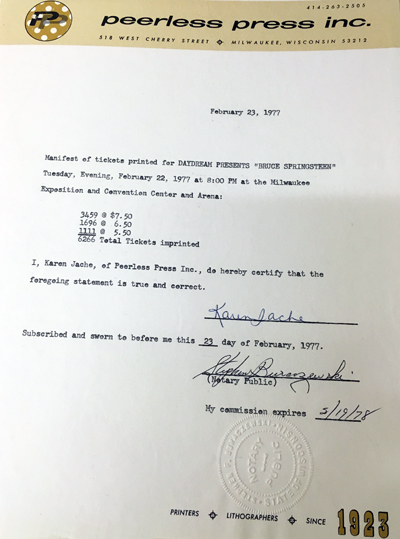 Hrobsky's got some actual tickets in her collection, but this document is interesting. From a nearby printer, it's the notarized receipt for the printing of tickets for Bruce Springsteen's 1977 performance at aptly and coincidentally-named Bruce Hall in the Auditorium. 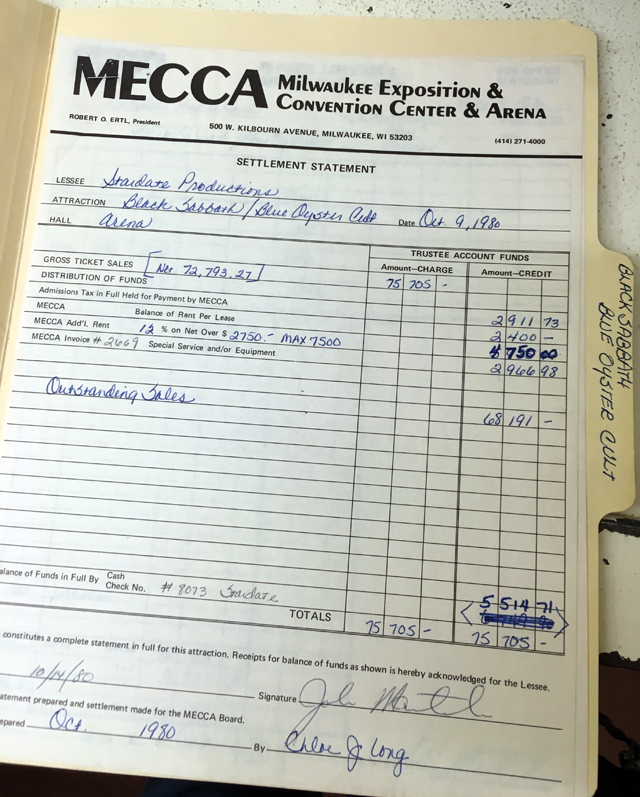 "I don't know how they could've settled that show," quips Hrobsky. "It seems like it's still not over." She's referring to the riot that took place after Black Sabbath cut short its performance in 1980 when Geezer Butler was hit by a bottle. Hrobsky notes that at least one attendee told her it appeared the bottle fell out of the rafters, rather than having been thrown onstage from the audience. Later, a stash of super-old beer bottles was found in the rafters ... could it have been? 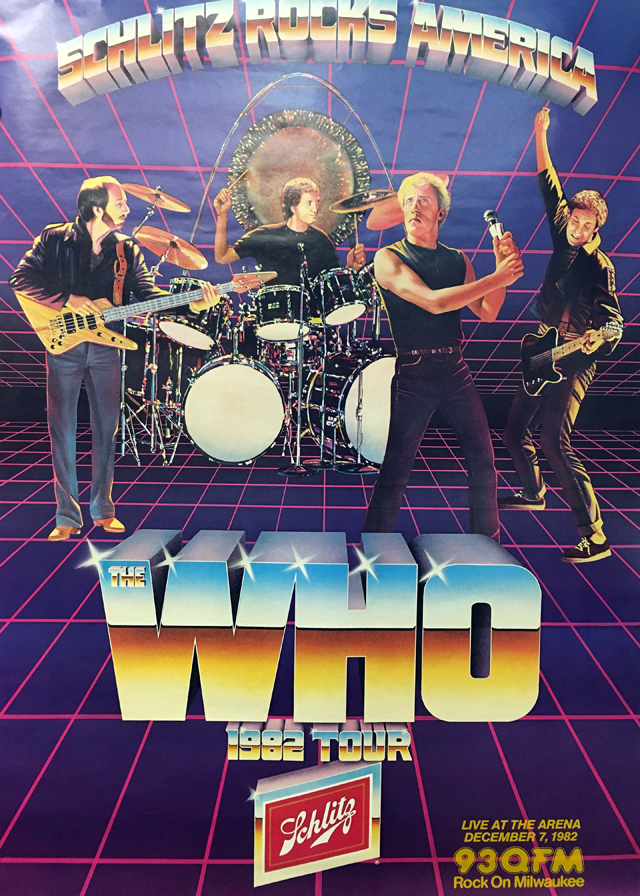 The band arrived in Milwaukee during the second leg of its North American tour for the "It's Hard" LP. And, appropriately for Milwaukee, sponsored by Schlitz. 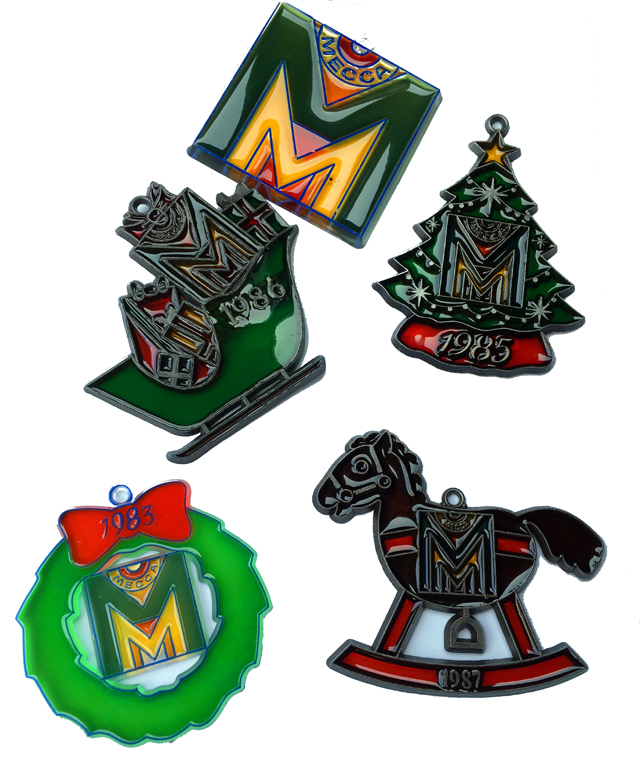 MECCA used to make and share ornaments during the holiday season in the 1980s and Hrobsky still has a smattering of them.

Milwaukeeans of a certain age will remember the familiar look of the colorful MECCA tickets. This one, from 1990, was for the Nintendo Powerfest. 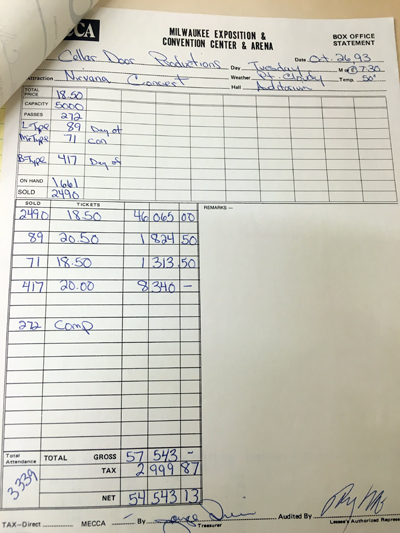 While everyone and their mother claims to have seen Nirvana at The Unicorn, it makes sense no one talks much about this appearance six months before Kurt Cobain's death. Because, look at those numbers... 3,339 total attendance.