Choose your own adventure - from small bites and plates to entrees - at Merriment Social.

Merriment Social, the new restaurant by Chef Andrew Miller, formerly of Zarletti Mequon, is opening at 240 E. Pittsburgh Ave. on Friday, Aug. 7, and Milwaukeeans can expect a number of things from the new hotspot.

First, there is plenty to love in terms of the atmosphere, which makes good use of the pseudo-industrial look of the space. Brick and wood are the primary textures, with exposed ductwork hanging just below the restaurant’s skylight.  The walls sport fun artwork, including lighted framed letters on the east wall, spelling out the word "Merriment."

And merriment is the name of the game. This isn’t the restaurant to go for a quiet dinner or a meeting where hearing every word is paramount. But, it’s a great spot to go with friends. The space itself tends toward being loud – thanks to high ceilings and solid surfaces which bounce noise to and fro.  Music added to the fray, keeping things lively and adding to the ambient noise of plates clattering and people socializing.

Next, there is plenty to try in terms of food and beverages. Although the menu is relatively small, you have choices between "dim sum style" offerings (small two-three-bite dishes served on carts at the beginning of your meal) to small plates, salads, sandwiches and entrees. A range of items priced between $3- and $22 offer the opportunity to tailor a meal according to just about any budget, with the flexibility of sharing or not sharing plates with fellow diners (which is what we did on this first visit for the restaurant’s soft opening).

An ample cocktail menu does its duty with riffs on classics that come in sizable glassware, justifying pricing that runs between $8 and $12. Punches, like rum and milk punch, are priced higher at $16-18, but come in carafes which can be shared generously among two or three people. 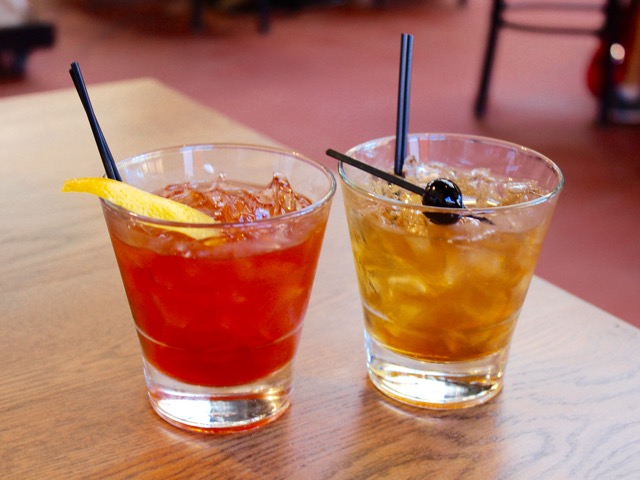 The tap-forward bar features 16 taps, most craft brews from Wisconsin. A sizable wine list provides plenty of options with about 25 wines by the glass, along with 20 more reds and whites available by the bottle only.

You could make a small meal of the offerings making their way across the restaurant by cart, which include items like scallops marinated in orange juice with jalapeno (a fresh take on ceviche), Mexican style corn, roasted and slathered in seasoned mayonnaise; roasted peaches with quark and pickled onions; and pickled dill cheese curds with peppers. All dim sum options are priced between $3 and $6. 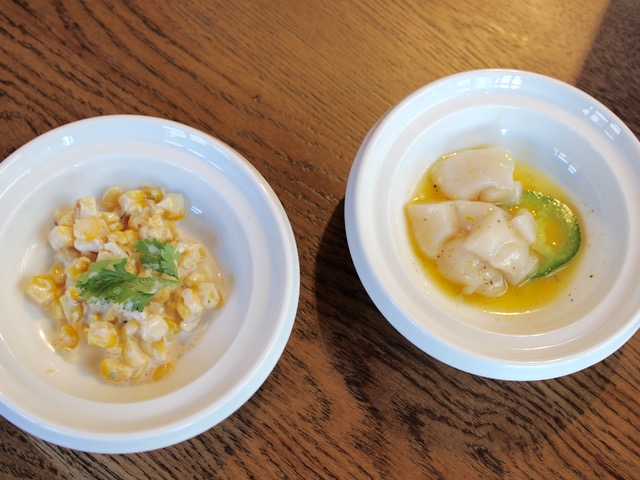 Other things to eat

Inventive vegetable dishes include fried Brussels sprouts tossed with fermented honey and served with crisp pie crust pieces, pecans and thyme-creme fraiche ($6). Brussels sprouts are always delicious when fried. But, this unexpected dish juxtaposes both sweet and salty flavors with myriad textures, creating a new take on an old favorite. 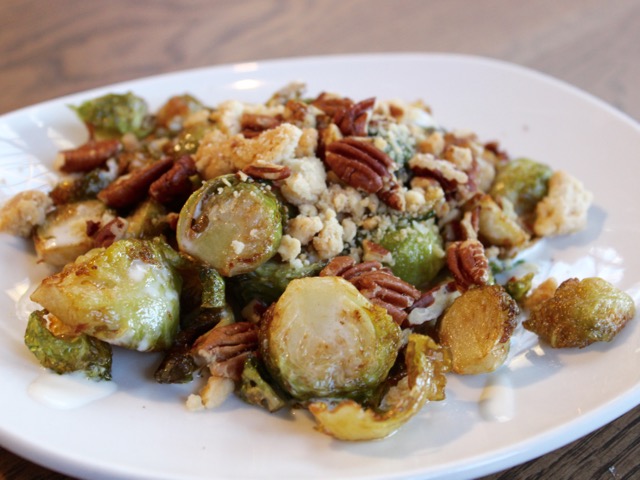 Comfort food options like spicy ranch Clock Shadow Creamery cheese curds baked in a pool of creamy fontina cheese ($9) are sheer comfort food. Go in with a fork and sample the hot curds on their own, or scoop out stretchy cheesy goodness to spread on the accompanying foccaccia. 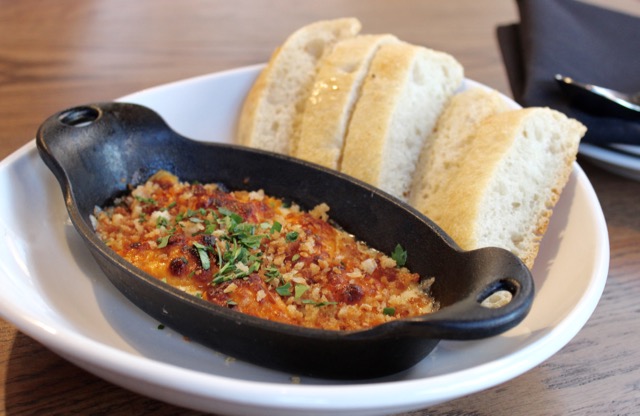 One of the salad options featured roasted broccoli and spinach with crisp pieces of ham hock, champagne vinaigrette and Bellavitano gold cheese ($8). Reminiscent in flavor to a classic spinach salad (think bacon dressing), the dish was large enough to serve as a light entree or split with two or three diners as a side salad. 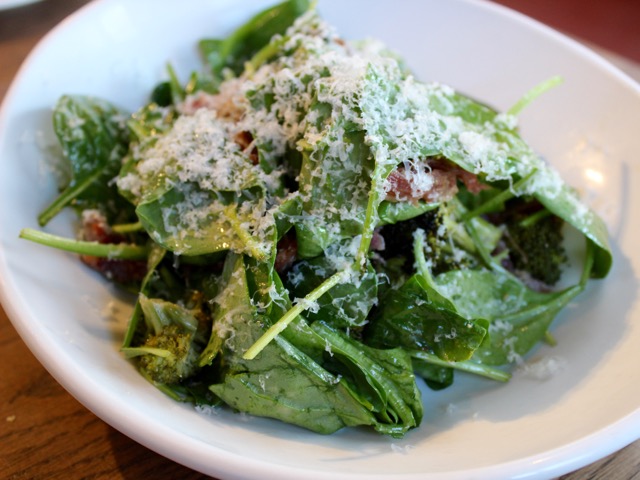 The fried chicken with pork belly pancakes, maple butter and hot sauce ($17) had great potential. The pancakes (two mid-sized cakes) were light and fluffy with small flecks of pork belly throughout. They were perfectly delicious spread with the house-churned maple butter – though applying the butter is a task that should be done straight-away before the pancakes have a chance to cool.

Though the meat of the fried chicken breast was a bit on the dry side, it had a nice crisp crust that tasted great and was thick enough to hold up to the drizzle of hot sauce it was topped with. As a fire breather, I would’ve loved to see additional hot sauce on the side. 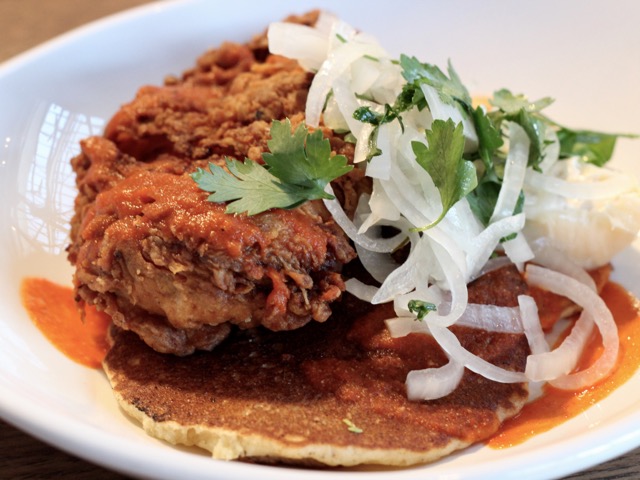 Meanwhile, the Merriment Burger ($13) was probably the highlight of the menu with its two tender, well seasoned grass-fed beef patties (cooked to order – a nice medium rare), creamy house-made American cheese, crisp bacon, housemade pickles and "Social sauce" – a sweet concoction that played off the saltiness of the burger and bacon. A Japanese style milk bun was sweet and light, but held up perfectly against the burger and toppings. Meanwhile, hand-cut fries were well cooked and amply salted. Simply perfect in every respect. 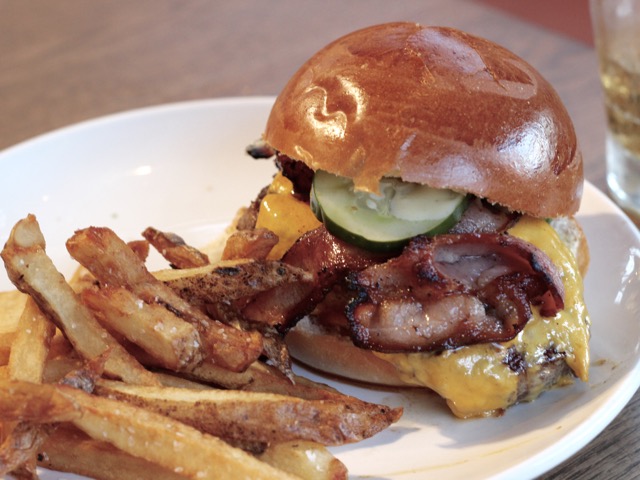 Dessert – four warm churros served with Mexican chocolate and sesame caramel sauces ($6) – were the perfect end to dinner. The churros themselves were crisp and tender; the chocolate sauce was dark and rich, and the sesame caramel was sweet and light with a hint of sesame flavor. It’s the sort of dish that would be the perfect evening pick-me-up with a mug of coffee. 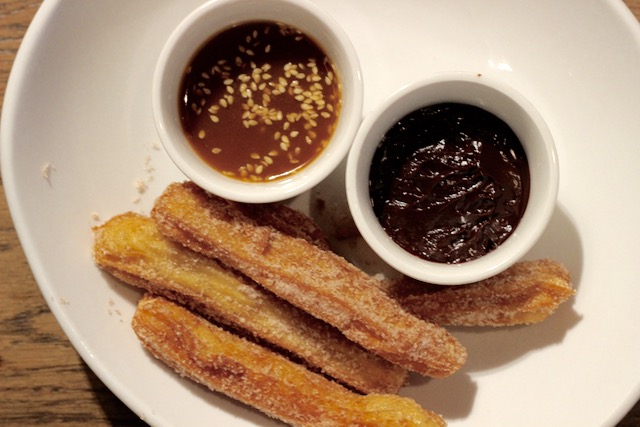 On a return visit, I’ll look forward to a new selection of dim sum, as well as small plates like the pb&j foie gras pierogi ($9) chicken wings with massaman curry and pickled radish ($7) and roasted bone marrow with bacon jam, red onions and foccaccia ($12), which they were out of when we visited. And since we had such good luck with the burger, I’m more than eager to try the pork belly reuben ($12), along with the braised short ribs with herb spaetzle, horseradish gastrique and caraway pickles ($22).