Tattooing as we know it in Milwaukee today has evolved drastically over the past two decades. It's a wave that's been getting bigger and bigger, and tattoo artist Adam Werther has been riding it.

Tattooing as we know it in Milwaukee today has evolved drastically over the past two decades. It’s a wave that’s been getting bigger and bigger, and tattoo artist Adam Werther has been riding it. Werther was one of the first artists to open a tattoo shop – called Adambomb Gallerie – after the service became legal in Milwaukee in 1998.

"Since the time MTV started showing tattoos on television with shows like ‘Inked’ (2005-2006) and ‘L.A. Ink’ (2007-2011) there’s been this momentum happening," says Werther, a Milwaukee Institute of Art and Design (MIAD) alumni, who graduated in 1997 with a BFA in sculpture. "I happened to catch that momentum."

The momentum created huge success in Werther’s career early on, especially in the mid-2000s when there weren’t many tattoo artists around. He was driven by ambition, and passion, to become one of the greatest tattoo artists in Milwaukee.

"When I first started tattooing, I was all about being the best and at the time there were a few amazing artists moving the industry along," says Werther. "I remember buying every single tattoo magazine that came out every month. I cut out all the ones I liked. I would laminate them and put them all in a binder. Then I would go through and get inspired by them, using them as drawing references. I called it my Bible."

Strong motivation led Werther to grow a big clientele base and open up his own tattoo shop, now located at 2028 N. Dr. Martin Luther King Dr. in Brewers Hill. He also had the opportunity to share his space with other up-and-coming tattoo artists at the time.

"At one point I had four other artists," says Werther. "It was myself, Lane Turowski, Kurt Halsey Frederiksen, Laurent Marin and Scott Lee working at my shop. We peaked, and we were booked out. I never got booked solid like big artists who book years in advance, but all my artists were booked solid for like six months. Now they all have their own tattoo shops."

Everything was working out pretty well for Werther. His artistry created new opportunities to have apprentices, compete in tattoo conventions, and travel the world. All that great success brought him a lot of celebration. But it also created a lifestyle that impacted his career.

"Within the tattooing community, there is a lot of partying and drugs," says Werther. "Ultimately I found myself partaking in that type of activity. It would affect my life choices, mental health, and client base. Luckily, I’ve moved on from that."

As Werther continued to ride the wave, the tattoo industry kept evolving, bringing both good and bad to established artists. The growing number of tattoo artists and shops popping up in Milwaukee was in some ways good, because it allowed clients to choose from many different artists and styles. But it was also frustrating for Werther.

"Right now I feel like there's this dichotomy and polarity happening in the industry," says Werther. "Currently there’s an oversaturation of artists and tattoo shops that’s thinning out the clientele. But there’s also a lot of really good work and innovation happening."

Tattooing has indeed changed drastically. Today, artists work with better quality inks, needles, machines and sanitation practices than ever before. There seems to be limitless possibilities. But at the same time, it's a very competitive market. Werther is impressed by the amazing tattoos and progression in the field, but has also suffered numerous complications and been forced to make critical decisions.

"I’m somewhat in a holding pattern, flying in a circle. I’m waiting to see what life presents to me. But I’m also watching the industry," says Werther. "At one point, I put this building up for sale because I thought I had to and it didn't sell. I’d like to sell my building and open up a super low key shop in Madison, closer to where I (now) live."

Werther has come a long way from when he first started his career two decades ago. After experiencing huge success and motivation, he now finds himself at a new crossroads in life – needing to make big decisions about his future.

"I’m trying to get back into having more passion for tattooing and art. I felt like I lost it and now I want to get it back and redefine that energy," he says. "I’d like to get back into making my own pieces of art and putting them in art shows."

Recently, Werther was part of a fundraising event called Feed Your Soul at Flux Design to raise funds for local communities through the visual and performing arts. They had live artists working on paintings, drawings and even tattoos. 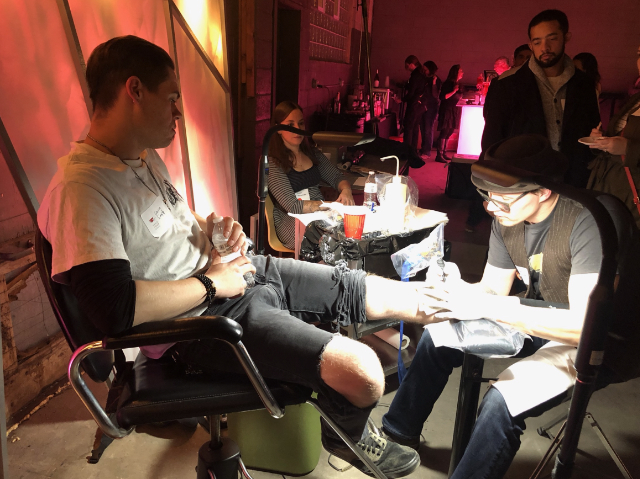 Werther tattooing at Feed Your Soul.

"For the first time, I tried a completely different tattoo process," says Werther. "I'd never done a tattoo without stencil. I at least drew on somebody first and then went from there. I didn't know what I was going to tattoo. The person who was getting the tattoo didn't know what I was going to do. I just started scribbling on the person's lower leg. It came out pretty amazing. It was a gold, squid, octopus thing."

Werther said he hopes to try that process again one day.

Throughout his career, Werther has experienced both success and failure and has persevered.

As an emerging tattoo artist myself, I believe that tattooing is one of the hardest artistic mediums any artist can learn to work in. I can relate to a lot of what Werther says about the current state of tattooing and how life as an artist can be a roller coaster.

Werther still manages to be persistent with everything. Even when he fails, he keeps going and is always finding a way to move forward. I find Werther to be very knowledgeable about art, tattoos, and life. It's been almost two decades and he’s still out here doing what he loves, which says a lot about him as a person and as an artist.

"I was told, ‘oh, you were given a gift,’" says Werther. "I think to myself, 'if I was given any gift of anything, it was persistence in the constant face of failure.'"