Local designer traveled the world but finds a home in Milwaukee

MIAD graduate and New York native Ethan Keister is a man whose interest in travel and design literally took him around the world from New York to India and then, by choice, back to Milwaukee.

Ethan Keister is a man whose interest in travel and design literally took him around the world, from New York to Milwaukee to India and beyond.

Keister's love for travel came from his parents, who took him on many family trips when he was young. He later became interested in graphic design during his sophomore year of high school in rural New York. His first freelance gig was helping his seventh grade social studies teacher make a logo for a program called the Kenya Outreach Project that helped to build a high school in Kenya.

Keister’s pastor from his church grew up in Nairobi and set up this foundation to establish a high school in his community. When the school was finished, the pastor invited Keister and his family to take part in the ribbon-cutting ceremony, marking the first time graphic design took him to another place in the world.

Growing up in rural New York, Keister didn’t experience big city life. In investigating colleges, he looked at Boston, Baltimore and Minneapolis before settling on Milwaukee. He called it a "big city with a small town vibe."

Keister graduated from Milwaukee Institute of Art and Design (MIAD) with a BFA in Communication Design in 2017 after creating a successful thesis exhibition titled "Odyssey." He was named a "Student to Watch" by Graphic Design USA.

Originally he wanted to travel to South America after graduation, but through a MIAD professor he was given the opportunity to help a family in India. The family ran two businesses and needed modern websites for tourism. Keister was given two weeks to decide if he wanted the job, and today he is so glad he took that chance.

Keister finds connection and community important in establishing oneself as a designer. He believes making connections helps build your portfolio that leads to future design experiences in many different places.

OnMilwaukee: How did you first become interested in graphic design?

Ethan Keister: I was always a drawer. Going back a bit I was born with a cleft, so I couldn't talk until I was 5. I knew very basic sign language, I had some surgeries to fix it. It's all good.

I wasn't a great drawer, but I kept practicing and I took a lot of art electives. In my graphic design class the teacher was great about teaching us Adobe software. I had kind of a knack for it, so I started designing all the shirt logos for the teams I was on: Alpine ski racer, cross country and track.

Why did you decide to go to India?

I went to India because I had the innate idea to travel, that’s kind of what my thesis was. I was going to take a few months – or however long I wanted – since I had saved up since freshman year. I saved about five thousand dollars and decided that was enough to just jaunt around for a few months.

My original plan was to go down to South America. I have an aunt from Ecuador and she said I have family down there to stay with which sounded awesome to me.

But then I had kind of a lucky break. I went out with a friend who was a teacher at MIAD. When I graduated, we went out for a beer after he said, "Hey, we can be friends now." He asks me what I want to do with my life. I said my plan was to go back to upstate New York, live with my parents and work for them. They’re foresters, so I would do grunt work for them like walking pipelines and stuff like that. I was going to save up a bit more money then go on my trip in the fall.

But he was like, "Instead of that, I’ll do you one better. You just graduated with a design degree, right? I have some friends in India, they’re a family I met there. They need two websites for the businesses that they own in the tourism industry. You’d stay three months over the summer. You’d leave in two weeks."

That's not a lot of time to think about it.

It wasn’t and I’m glad. I might have mulled it over for too long and then passed. But I remember wondering how many people get this opportunity on their lap? This was meant to happen and if I don't take this on, I would regret it for the rest of my life. So I went.

It was kind of like a Wes Anderson movie. I would sit on the balcony and work 20 hours a week. I’d take some breaks with my friend – we’d go on a hike and tour the village. I taught some boys English, just by bantering, and eventually I gave them weekly tests. The two boys could already speak dozens of languages.

Did it go the other way? Did you also learn other languages?

Hindi is very hard, but I learned some and it was fascinating. It was a very symbiotic work relationship, mostly I got to experience the Himalayas and they got to learn English and get design and marketing help.

Graphic Design USA named you a "student to watch" and then you got all that experience in India. Was it easy to get a job when you got back?

I got a job at Zizzo Group, where I still work now. I had an internship there during my junior year at MIAD through my mentor, Tony.

How did you find out about MIAD all the way from New York?

My dad found it on Google, I was looking at Boston, Baltimore, a bunch of East Coast universities, too. I got accepted into all the private schools, but none of the universities which was funny because university life probably wouldn't have suited me anyway.

My dad thought I needed backups that were accredited like Minneapolis and Milwaukee. My parents are big travelers, that's probably where I get it, they wanted to make it an adventure and go out to these places throughout my junior and senior years. It came down to Boston and MIAD, I went to Boston first and kind of got treated like sh*t. I was supposed to shadow a student, but they shrugged me off. The teacher was somewhat abrasive and made me feel like I didn’t belong.

But then I came to MIAD and had the exact opposite experience: everyone was super nice and welcoming. I came into the city underwhelmed a bit after driving through Chicago for the first time. Even though I came from New York, New York City is eight hours from us so I hadn’t seen big cities like this before.

My tour guide wanted to give me a tour of the city and admissions has their own car so they took me and my parents around. I fell in love with the city. The people were stupid nice. It became obvious to me that Milwaukee worked for me.

How has your design affected Milwaukee and what's going on in the world?

It impacted my personal life a lot. But I also got to help a family that didn’t have the means to hire a "high-end designer" whatever that means. I wasn’t high-end, but I was somebody willing to help and in return for housing.

You got paid in the experience, not necessarily cash, right?

Yes, and I made life-long friends. That’s how I try to connect with my design is meeting people and having these kinds of conversations. Design will bring you together and what you can give them is awesome. But I value the connection that comes out of it and I would never take that away. 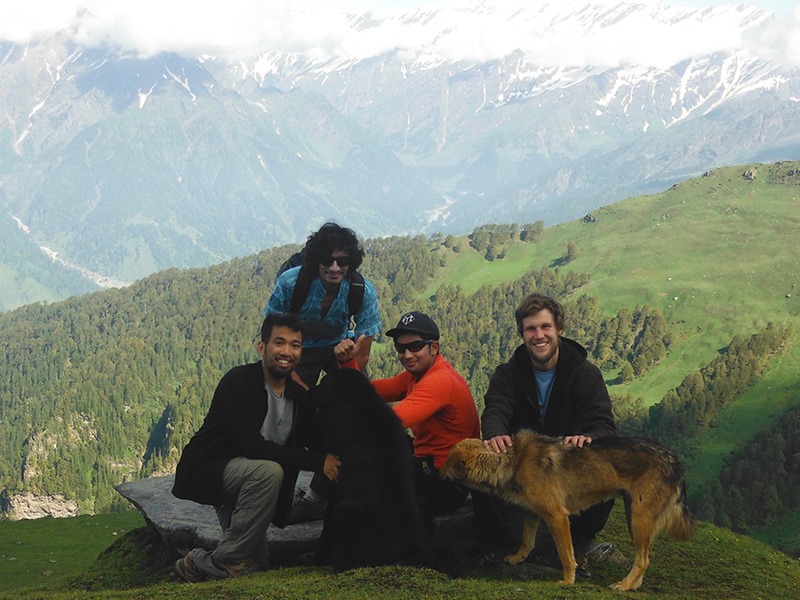 How has your design impacted Milwaukee and the world?

My designs just so happen to be helping people in Kenya and India, but I don't think I should be looking at my worldly application yet. We’re so young, I don't think we have to focus on that right now. We want to help our generation, but we got to focus on ourselves and grow ourselves before we can help all of humankind. In the process we should be so lucky to help other people along the way. What we have is a gift, we can give voices to people. Design can change the world, it's a very lofty idea but it's noble in a way you can give somebody professionalism and it will help a business out.

So, it's nice that we get to do what we like and get out of that desire to design. Short answer, I’m not there yet.

What are your thoughts on branding yourself?

Branding yourself as a designer is the most challenging thing, because as a designer you should be constantly changing. But trying to find a mark that stays kind of "nebulous" but has you in it.

Do you think you'll stay in Milwaukee?

Milwaukee will always be my home base. I like where I came from and didn’t have a horrible experience growing up: loving parents, good friends, but it never felt like a place I could own. Milwaukee feels like a place I could say I’m from and be proud of. Even small projects here can be really rewarding. And Milwaukee is on the map now. I used to tell people back home about Milwaukee and they’d say, "where the f*ck is that?" I didn't know it that well, either. Now I go back and they all know Milwaukee. Go Bucks.

So what's next for you?

I wanted my thesis to lead to something I love, and it has. I just want to do work that keeps bringing together my passions: helping other people while creating amazing things to share with the world.