The team at Serve Marketing along with other professional volunteers practice "design activism" by raising awareness for sex trafficking in Milwaukee through a special campaign called Lacey's Hope Project.

For many, Milwaukee is the vibrant and energetic undiscovered gem of the Midwest. With plenty of action and charm, there is something for everyone to enjoy in this city on Lake Michigan. Despite its charm, Milwaukee and its surrounding communities also have a serious underlying issue.

Milwaukee is a hub for human trafficking. Based on a report from the Milwaukee Police Department, an estimated 340 young adults and children had been exploited and victimized from 2013 to '16. On top of that, Wisconsin ranks third in the nation for sex trafficking. Recently, more and more people have begun to take notice, including those who strive to make a change through integrated design campaigns.

For the team at Serve Marketing – along with volunteers from other local agencies including BVK – awareness for this topic was one of their main focuses in the past year through a special program called Lacey's Hope Project.

Lacey’s Hope is a campaign calling attention to the sex trafficking that happens every day in all our communities. Founded by survivor Emmy Myers, the initiative raises community awareness. Additionally, there is a strong emphasis on dispelling the myths around sex trade and drug addiction. 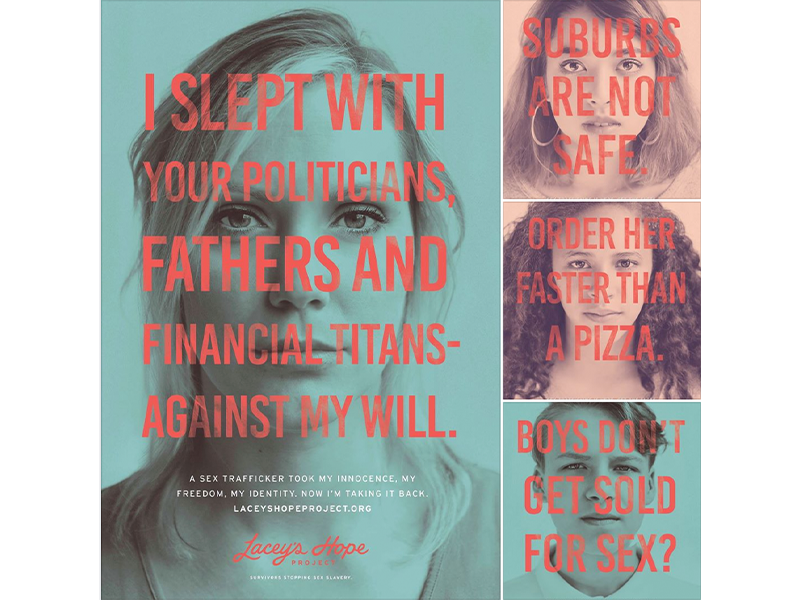 Most people assume the issue is concentrated in the central city, but in reality, it is a problem that extends beyond urban borders. According to The Wisconsin Department of Children and Families, sex trafficking is happening in our cities, our rural towns, tribal communities and in our suburbs - much like Myers’ story.

The mission of the website and all of the campaign material is to be hard-hitting, impactful and to the point.  Alison Galarza, Art Director and Designer on the project, stated that creative concepting for the project draws from the beauty and innocence of female victims while simultaneously communicating an awful issue. The juxtaposition of these realities drove the vision for the entire campaign.

All of the work done for the initiative led to Serve Marketing receiving "Best of Show" at the 2019 United Ad Workers Milwaukee 99 awards show. According to Galarza, the campaign will likely grow and enter a second phase in 2020. Until then, she works outside of her new role as Senior Designer at GMR Marketing to be an activist through the work she creates.

Galarza garnered this passion for helping her community during her time as a student at the Milwaukee Institute of Art & Design.

"That is what drew me to that side of design because I am not a politician, but this is how I can help out," says Galarza.

When asked what "design activism" meant to her, she says, "It is coming up with the best, most efficient or intense way of talking about hard-hitting issues with the general public and getting that message across. Whether that be for sex-trafficking, segregation or poverty in cities, it is up to designers to use their gift and passion to create cutting-edge or cool visual ways to communicate the tough things that are going on in our communities."