Milwaukee Habitat for Humanity broke ground last week on a project to build, rehab and repair 100 homes over three years in the city's Midtown neighborhood, between North 21st and North 30th Street, from Lisbon to North Avenue.

Milwaukee Habitat for Humanity broke ground last week on a project to build, rehab and repair 100 homes over three years in the city’s Midtown neighborhood.

The $10.3 million Midtown 100 plan will build 65 new homes on vacant lots in the neighborhood between North 21st and North 30th Street, from Lisbon to North Avenue, rehab 15 more there and make critical repairs on another 20 in the area. 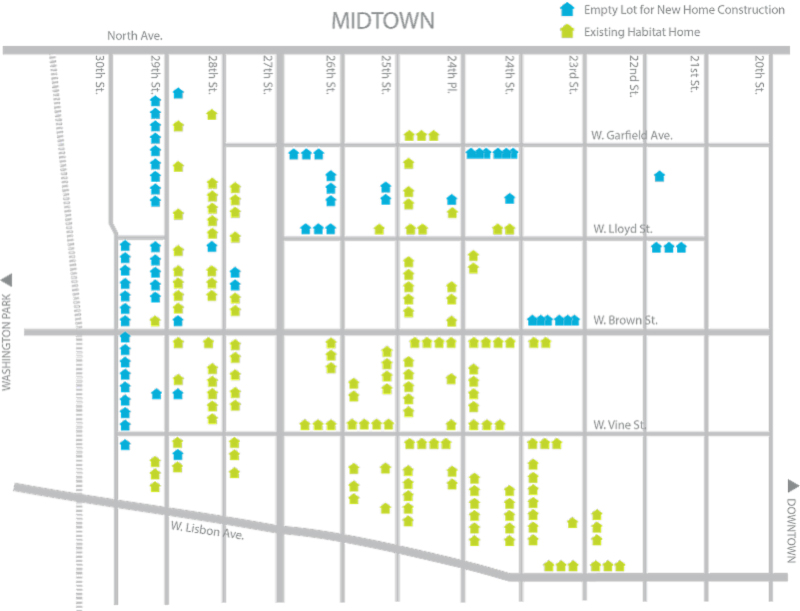 The plan was unveiled last July, but more details were announced as Habitat says it needs to raise $6.8 million from corporations, organizations and individuals to make Midtown 100 a reality.

"Midtown 100 combats our city’s affordable housing crisis by building the highest concentration of affordable single-family homes in Milwaukee since WWII," said Milwaukee Ald. Russell Stamper, in whose district the Midtown neighborhood is located.

"Milwaukee Habitat will utilize its innovative partnerships with community-focused organizations to dramatically increase homeownership opportunities while helping current residents stay in their homes. I want to thank Habitat its partners for this incredibly valuable initiative in my district."

The plan would serve the most families in the city since Habitat began work here in 1984.

According to a statement from Stamper’s office, the nearby Washington Park neighborhood has seen a 48 percent decrease in violent crime and a 20 percent increase in "residents who say they feel like they are part of the neighborhood since 2013, when Habitat began building new homes and repairing existing ones in that area via its Neighborhood Revitalization Initiative.

"Our goal is to build on the successes of what we have done in Washington Park," Brian Sonderman, executive director of Milwaukee Habitat for Humanity, told Neighborhood News Service in July.

"Through groundbreaking partnerships with community-focused organizations, we will dramatically increase homeownership opportunities while helping current residents stay in their homes."

Habitat also plans to extend its reach into the Harambee neighborhood and expects to invest up to $20 million in that area beginning in 2021.

"When you've invested that many hours of sweat equity, you've made a commitment, which leads to the homeowners staying in their homes long term," Sonderman told NNS.

How to move from renting to buying

Old St. Anthony's Hospital will be converted into supportive apartments