Coaches in any sport preach accountability, from their players and themselves. But all have an ego, and believe their way is the right way. Sometimes, it's "do as I say, not as I do." But Green Bay Packers head coach Mike McCarthy has determined he needed to change in order for the Packers to win another Super Bowl. It sends a strong message.

If there was ever – and I mean ever – any doubt that the National Football League rules the sports world, from print to online publishing to talk radio, it was the slow leak of "news" early this week that Green Bay Packers head coach Mike McCarthy was going to give up his play-calling duties.

People went crazy about it, and no, it’s not just a "Wisconsin thing."

I mean, look at this: 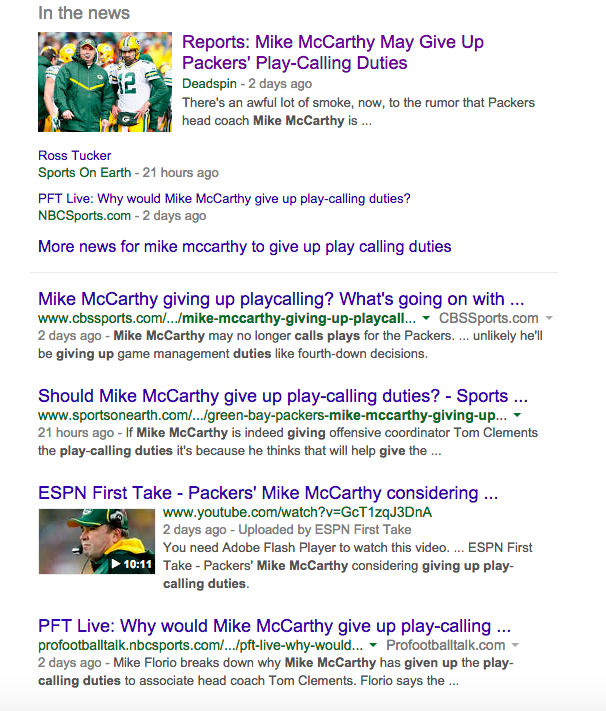 This was national news.

Hell, even talk radio in Chicago devoted nearly an hour to this news the other night.

Now, you can say it’s about the Packers, and how much of a national brand the team is. That’s true. It’s also a compliment to McCarthy and his long run of success on the sidelines at Lambeau Field.

But to me, it says something different.

It means that McCarthy has held himself accountable for the Packers recent run of playoff failure.

He’s thought about making this move for some time now, and has always said he will do what’s in the best interest of the team. And, perhaps, the NFC Championship game in Seattle was the tipping point.

No one noticed that Richard Sherman was playing with one arm. Aaron Rodgers complained (again) after a postseason loss about the play selection and how conservative it was. The Seahawks gleefully talked about a hole in the Packers special teams that was so big they installed the trick play that led to a touchdown just days before.

So, McCarthy looked in the mirror after the year was over and decided it was in the best interest of the team for him to, reportedly, promote Tom Clements to associate head coach and give him the play calling duties while promoting Edgar Bennett to offensive coordinator.

This isn’t a panic move – McCarthy was just given a contract extension that most believe runs through 2018 – and his job is one of the most secure in the NFL.

The Packers have won a lot of regular season games since then, but they’ve only returned to one other NFC title game and have no other Super Bowl appearance to hang their hat on.

Coaches in any sport preach accountability, from their players and themselves. But all have an ego, and believe their way is the right way. Sometimes, it's "do as I say, not as I do."
But McCarthy has determined he needed to change in order for the Packers to win another championship. It sends a strong message.

It tells every player in the locker room that if the head coach, the most Alpha of all the Alpha males in that locker room, would give up something he loved so dearly, that he felt so strongly about, for the good of the team – what can you possibly say, or do, if you’re asked the same thing.

Now, Clay Matthews and Julius Peppers were asked to make sacrifices for the good of the team in 2014 by changing positions. Players like A.J. Hawk were benched.

So to them, it shows that their coach isn’t above improvement, either, that he isn’t above the team.

It also illustrates another point – McCarthy was really ticked off that his assistant coaches weren’t being interviewed for promotions around the league when jobs opened up.

This is a big deal in the coaching fraternity. As a head coach, you want to be known for your assistants being picked off and promoted.

A head coach can only really do, or control, so many things. Calling plays was McCarthy’s "thing," his baby. And he gave it up, for the good of those around him.

If the Packers offense crumbles in 2015, McCarthy may well indeed take the reigns back, but this move speaks volumes about the man, and his drive for the ultimate prize.