As many as 20 tenants are expected to occupy the forthcoming 3rd Street Market Hall, the food hall planned for The Avenue. Among them will be Milk Can, a burger and custard concept; and Milk Bottle Bakery, a complementary venue which will feature breads, croissants, sandwiches and a selection of deliciously fun desserts.

As many as 20 tenants are expected to occupy the forthcoming 3rd Street Market Hall, the food hall planned for The Avenue, 275 W Wisconsin Ave.

Among them will be Milk Can, a burger and custard concept; and Milk Bottle Bakery, a complementary venue which will feature breads, croissants, sandwiches and a selection of deliciously fun desserts.

Milk Can: A dream comes to fruition

Named for the vessel historically used to transport milk from dairies across Wisconsin, Milk Can aims to showcase a variety of comfort foods Fogle says he grew up eating.

"We wanted there to be an ambassador for Milwaukee," says Fogle, noting the food hall’s location in proximity to the convention center and Fiserv Forum. "A place where they could enjoy a crusty roll with a Milwaukee-made brat and some of the best custard around." 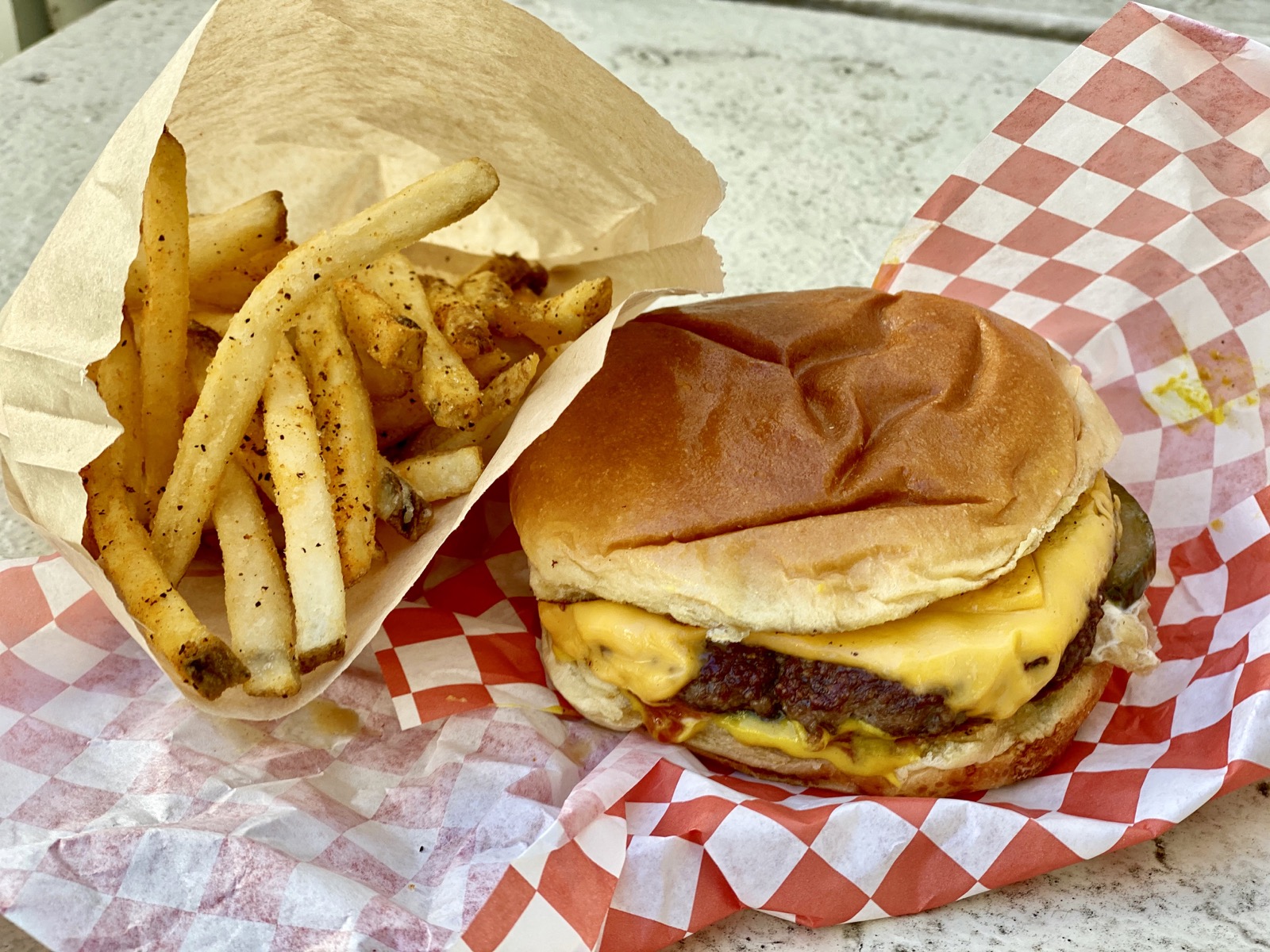 The menu will feature a variety of burgers from basic cheeseburgers served with the works; and a Hangover Burger topped with cheddar and pepper jack cheeses, bacon, cheesy hashbrowns and chipotle mayo; to a Wisconsin Burger featuring bratwurst, Muenster, dijonnaise, pickles and cream cheese on a pretzel roll.

Burgers will be made with a custom blend of beef that’s ground in house. They’ll be served on Turano buns slathered with high-quality butter and toasted until golden. In fact, you can get some sense of what to expect if you look to the burger offerings at Bass Bay Brewhouse, which has effectively functioned as a testing ground for many of Fogle's ideas. 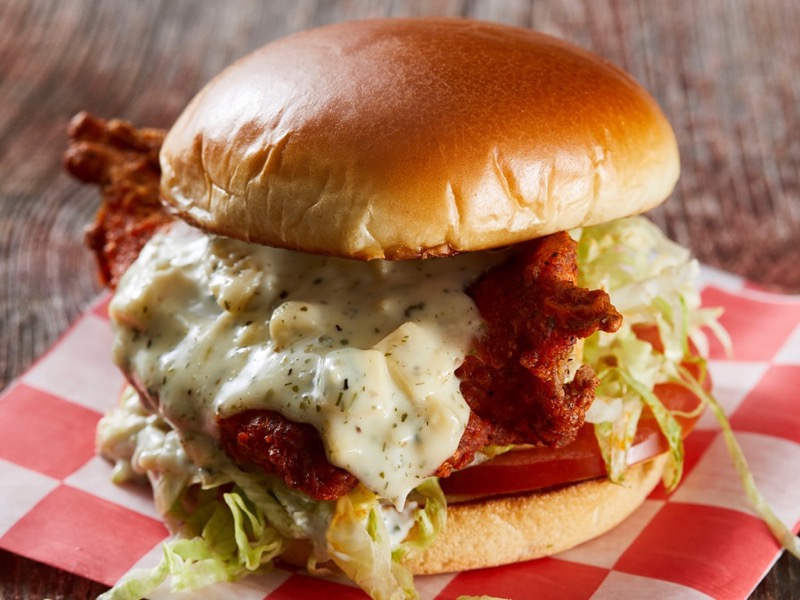 Sides at Milk Can will include seasoned French fries, onion rings and deep-fried cheese curds along with loaded fries topped with ingredients like chili, cheese sauce and Fritos; or pulled ham with gravy and fresh cheese curds. 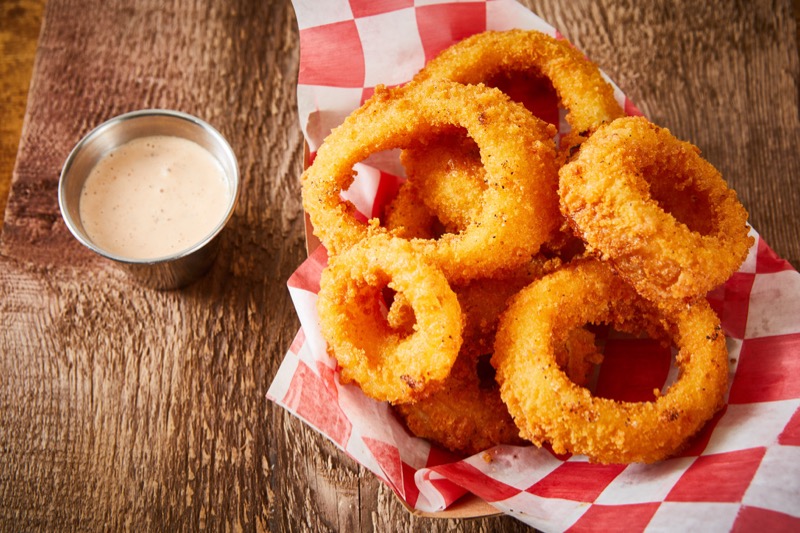 And yes, there will be housemade custard. Rather than relying on a purchased custard base, Fogle says they’ll make their own using eggs and cream flavored with vanilla beans or Belgian chocolate.

The custard will be available in cones or dishes with inclusions like crushed candy bars or cookies, praline, cookie dough and brownies made at the Milk Bottle Bakery. The custard will also be used in shakes, floats and sundaes like the Milwaukee Road with chocolate custard, candied peanuts, marshmallows and salted caramel; and the Cookie Jar, with vanilla custard, chocolate chip cookie dough, speculoos, Oreos and English toffee shortbread.

"The idea," says Fogle, "Is to give people the most delicious, creamiest and most fun to eat custard there is with a smoothness and texture that really takes it over the top.

"We want guests’ eyes to roll back in their heads," he says. "And we want them to say: ‘Holy shit, this is what it’s supposed to be like!’" 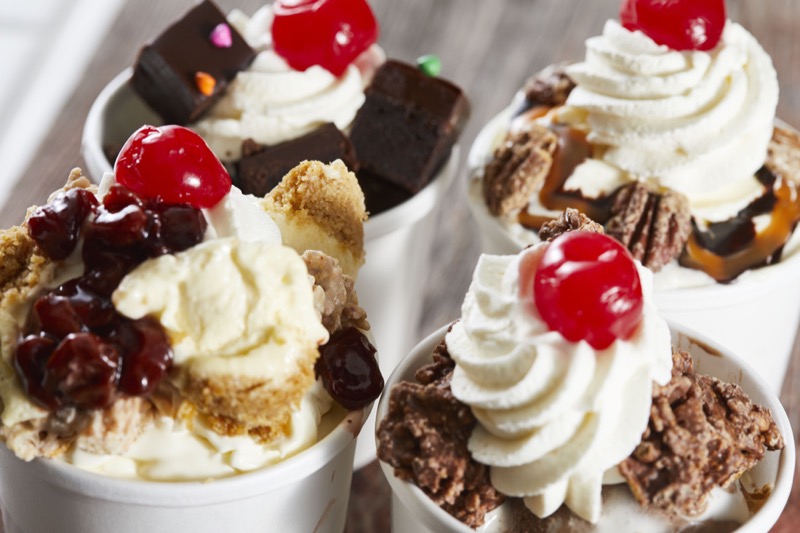 The experience is one Fogle has been dreaming about for years. In fact, he’s spent his career cultivating the skills needed to execute the deceptively simple fare.

Despite a solid fine dining background (including roles with Marcus Restaurants and SURG Restaurant Group) and a degree from the French Pastry School in Chicago (where he worked side by side with mentor and master pastry chef Jacquy Pfeiffer), Fogle has always approached his work in a very down-to-earth manner.

"When I trained with Jacquy Pfeiffer, I got to see firsthand how much he loved and showcased his culture, and from that I really learned to appreciate my own culture … which is based in American traditions like supper clubs and fried chicken and burgers."

In fact, among his early aspirations was a dream to own a fast food concept. "For years I talked about this concept called Chubby's where we’d serve these huge cheeseburgers, chicken sandwiches with like four chicken breasts on them … buckets of fries. Totally abundant and not expensive."

It was a dream he stewarded throughout his career. And, as his knowledge of food, techniques and food science grew, he used that knowledge to experiment and improve recipes for everyday comfort foods, discovering (among other things) ways to preserve the crispness in a carry-out fish fry and maintain the crunch of a fast-food style French fry.

He’ll bring a similar approach to Milk Can, where you can expect burgers that exemplify perfection in their simplicity and thin-cut, crispy fries seasoned with a custom blended seasoning salt that’s absolutely addictive.

"As long as I’ve known Kurt, the Milk Can concept has been in his head," notes Ryan Oschmann. "And it’s great to see it finally happening. I couldn’t be more excited."

Meanwhile, Fogle says, the bakery presents an opportunity to not only supply Milk Can with high quality, housemade ingredients, but also to showcase the wonders of a modern American bakery.

This isn’t a French patisserie," he says. "This is the culmination of a variety of things we’ve taken years to perfect. It’s about taking classic French technique and blending it with techniques from our grandmothers and friends."

That means classic offerings like baguettes and multi-grain bread along with both sweet and savory baked goods from croissants and Danish to petits gâteaux, cookies and macarons, blondies and brownies. Those offerings will be supplemented by items like sandwiches, soups, salads and beverages including custom blended Anodyne Coffee. 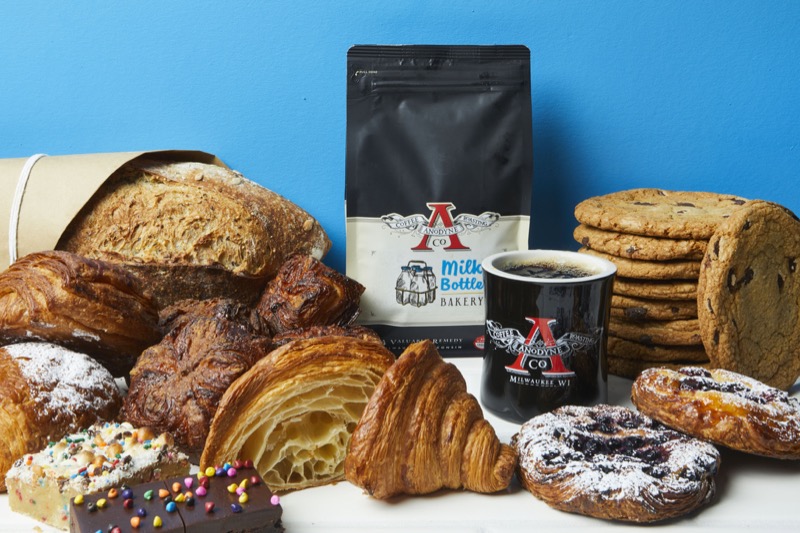 At the helm is O’Neil, whose work has been showcased most recently on the tables of SURG venues including Carnevor.

O’Neil, who says she grew up baking simple items like boxed cakes and Tollhouse chocolate chip cookies, says she spent a good many years working random jobs – in venues from hair salons, retail shops and restaurants – before realizing she wanted to do nothing more than bake for a living.

"I was always looking for something that I was passionate about," O’Neil says. " I loved working in restaurants, but I didn’t love being a server ... I just kept thinking about baking and making desserts."

In fact, it wasn’t until she took a job working with Chef Darin Yenter at Juniper 61 that she was offered an opportunity to set foot in a restaurant kitchen.

"He saw my passion," says O’Neil. "And he took a chance on me. We collaborated, he let me play with ingredients, and that built the foundation for my first experiences." 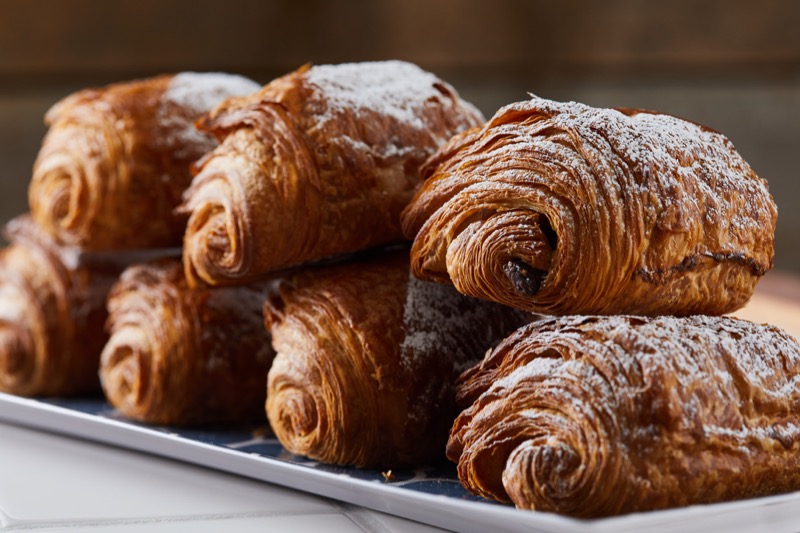 From there, O’Neil moved on to a position at Rocket Baby Bakery, where she began her education in the science of baking and acquired a solid working knowledge of Viennoiserie. From there, she says, she knew she needed to broaden her knowledge, so she applied for a job in pastry with SURG Restaurant Group.

"There I learned even more," she says. "I got experience working with a variety of plated desserts and ingredients including ice creams and royaltine. I also learned how to inventory items, cost out dishes and really manage a pastry program." 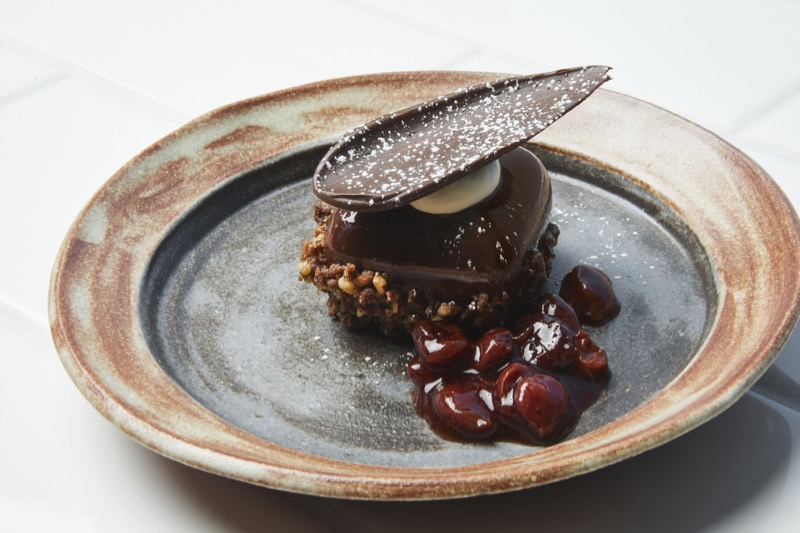 Most recently, she advanced her knowledge of chocolate work with an internship at the Barry Callebaut Chocolate Academy in Chicago where she gleaned knowledge of techniques and methods including tempering, molding and glazing – all applicable to creating desserts for the shop.

O’Neil says some of her favorite offerings include her ultra-fudgy take on Cosmic Brownies, blondies and macarons.

"We’re still working on flavors for our macarons," she says, "But we’re thinking of making them larger than normal … like a three- or four-bite macaron."

"They are a birthday cake blondie layer bar with a gooey cookie center and lots of sprinkles and toppings like butterscotch chips and toasted coconut," she says. "I make them for my nephew Layton’s birthday every year and send them to him through the mail. Kurt freaked out when he tried them."

In addition to serving up delicious burgers, custard and bakery items, both Milk Can and Milk Bottle Bakery will aim to further a company which fosters employee development through collaboration, respect and work-life balance.

It’s a philosophy which has been borne out at Bass Bay Brewhouse; but Fogle says it has its roots in a serendipitous meeting that dates back nearly 20 years.

"It was the early 2000s and I was the general manager of Rose Subs, a sub shop owned by Rocky Rococo," says Fogle. "And there’s this handsome devil who comes into the gas station for a sub at least once a week. At one point he told me: ‘Don’t ever quit this job; you make fantastic sandwiches.’"

But Fogle says he’d already been making bigger plans. "I told him my parents knew the kitchen manager at this supper club in Muskego, and she thought she could get me a job working there."

As it turns out, the "handsome devil" was Ryan Oschmann, a WCTC hospitality management student whose parents owned the Aud Mar Supper Club, which had been run by his family since 1958. "Pretty sure I could get you that job," Oschmann replied.

"I’m convinced I took that job so that I could meet Ryan," says Fogle, noting that those interactions at the gas station sub shop formed the foundations for an enduring friendship that would eventually lead the two to partner – along with Laurie Oschmann and Andy Meinen – to reopen the former Aud Mar Supper Club as Bass Bay Brewhouse and Aud Mar Banquet Hall in 2015.

Together, Fogle says, they built a vision for a venue that operates with a culture that builds people up, rather than tearing them down.

"Among our goals for these concepts is to really create a fun place to work … a place where people are dedicated but respectful, and where the stresses of the job don’t drive people to drugs, drinking and other destructive behavior. All of that has to end. We’re coming from this from a position of love and passion. And we want to train people in an environment that creates a willingness to learn. We’re not perfect, but we’re approaching this from a good place."

Oschmann agrees. "What’s really exciting to me about the project as a whole is where it’s taking our company," he says. "We have a lot of conversations about who we are and our mission. And it all boils down to our people. We see that people need to grow and gain experience; and as we expand it gives us the opportunity to provide opportunities for our employees and bring in new employees we can train to do the same."