MillerCoors' new beer-delivery option is not yet available here; thanks, Drizly

Thanks to MillerCoors, many beer-deprived beer-drinkers nationwide will never have to leave their couches, with the new "Miller Lite On-Demand" home services. But because Drizly, the alcohol-ordering app that connects customers and retailers, is not in Wisconsin yet, we have to wait for our beer.

Especially in Wisconsin, there’s nothing worse than running out of beer while watching your favorite team in a big game. Do you stay put and continue watching without precious booze, or run to the store and risk missing an Aaron Rodgers Hail Mary, Bronson Koenig buzzer-beater, Giannis Antetokounmpo free-throw dunk or Ryan Braun game-winning home run? Well, you don’t have to choose anymore … in some places.

Thanks to MillerCoors, many beer-drinking-turned-beer-deprived sports fans nationwide will never have to leave their couches, as the company announced last week that people can now order Miller Lite with the press of a button – think the Staples "Easy" button, but resulting in a more fulfilling response – or a simple voice command. Talk about convenience!

The "Miller Lite On-Demand" home services are courtesy of Drizly, an app that connects liquor sellers with consumers. For just $5, users can order suds through either the Miller Lite beer button – only available to a preselected test group of 500 Drizly customers, according to a MillerCoors announcement – or, more widely, via their Amazon Echo device. Simply tell your voice-activated Amazon Alexa to "Start Miller time."

The beer will arrive within the hour and cost the same for on-demand customers as store walk-ins, except for the extra delivery charge.

Hey, now, that does sound easy! And really great! Only one problem for us native, loyal High Life-lovers: The service is not available here. While Drizly currently serves more than 40 cities, according to MillerCoors, it isn’t yet in our area. The nearest location is Chicago.

Here’s the disappointing message you get in the app if you try to order Drizly in Milwaukee: 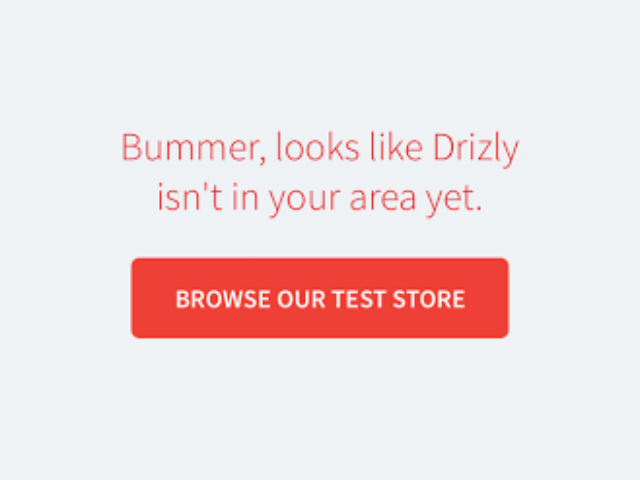 MillerCoors is the latest company to plunge into the on-demand food-ordering-service space, and many others have already landed in Milwaukee. According to an April 2016 article in the Harvard Business Review, $57.6 million is spent in the rapidly-growing, on-demand ordering market.

People are valuing convenience more than ever, and companies are introducing new services – including Amazon Prime, UberEATS, Kitchfix and many more – to appeal to busy (or, in this case, couch-bound) customers. MillerCoors launched tests in December to assess interest from consumers and is reportedly still evaluating results.

According to Drizly, the U.S. e-commerce market for alcohol is approximately $1.2 billion, with on-demand ordering making up a fraction of that amount. Drizly is the finder and facilitator for consumers and beer, wine and liquor retailers, while the stores – who pay a license fee that is based on sales – make the actual delivery.

According to the company, which was founded in 2012, an app for the deliverer includes technology that checks driver’s licenses to ensure that customers are of legal age to buy booze (other alcohol-related laws can vary by state and municipality).

Other brewers have dipped their toes into the home-delivery waters, including Carling, which is owned by MillerCoors, as well as the company’s biggest competitor. Anheuser-Busch InBev announced its Michelob Ultra product will soon begin an Alexa ordering service.

Which is all well and good, but doesn’t help us here in Milwaukee, the original brew capital of the world. Yo, Drizly, how long do we have to wait for our beer?