Taking a swing at the new Miller Park food: Day 1

Opening Day finally arrived this afternoon, much to the jubilation of baseball-starved fans. And for those at Miller Park with a more conventional hunger to satisfy, the Brewers' stomping grounds added plenty of new offerings to their culinary lineup this year. As OnMilwaukee.com's resident culinary crash dummy, I took it upon myself to sample the new foods. Here is part one of my findings.

Opening Day finally arrived this afternoon, much to the jubilation of baseball-starved fans. And for those at Miller Park with a more conventional hunger to satisfy, the Brewers’ stomping grounds added plenty of new offerings to their culinary lineup this year.

As OnMilwaukee.com’s resident culinary crash dummy, I took it upon myself to sample the new foods – much to the increasing concern of the woman sitting next to me. Here is part one of my findings.

Nachos on a Stick 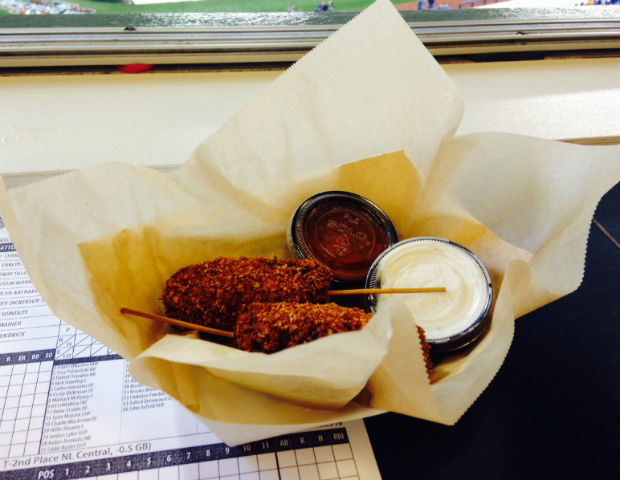 What would a Wisconsin event be without some food deep fried and shoved onto a stick against all better judgment and doctor’s orders? And now the latest food to get stick-ified? Nachos. Kind of. The Inside The Park Nachos take a wad of taco meat, cover it in Doritos crumbs, introduce it to a skewer and toss it in the deep fryer. So really, it’s just a Doritos-flavored corn dog wad, about as close to actual nachos as Taco Bell is to resembling Mexican food.

But is it good? As much as it must pain my heart and my doctor to hear it, I did enjoy my meat sticks. In the pantheon of Doritos-dusted meat products, it makes for a quite tasty snack. There’s a nice mix of textures with the crispy crunch of the Doritos crust and the soft taco meat inside, and the meat even had some flavor – that flavor being whatever vague spices Doritos are supposed to taste like. It delivered just the base-level mindless consumption satisfaction I want from a snack food. My sticks disappeared into my stomach-y ether in barely a minute, and I’ll be pathetically honest: I was sad when they were gone. 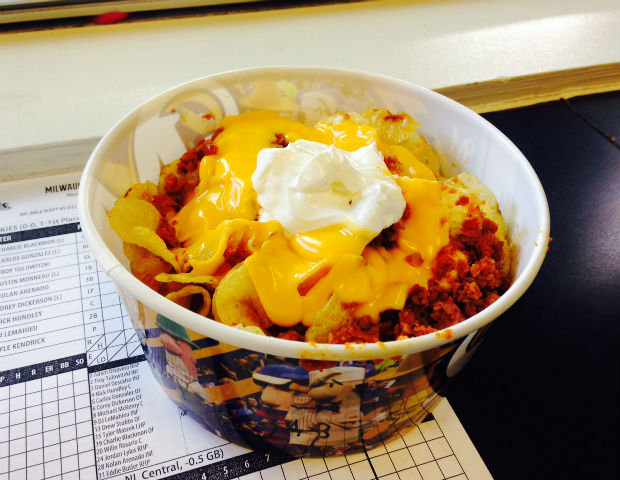 I had something similar to the brat-chos last year at the Texas Rangers' Globe Life Park in Arlington. Down there, it was called a chipper, a big bucket of potato chips slathered in various artery-crying toppings. I ordered a poutine one covered in gravy, cheese and pork. The heart palpitations haven’t stopped since.

Even so, I think I enjoyed the chipper a bit more than Miller Park’s new brat-chos. The concept is the same: crunchy potato chips under a pile of stuff, in this case sour cream, nacho cheese and ground-up bratwurst meat playing the part of the taco beef (so it’s really more like a baked potato bratwurst than a nacho dish). Unfortunately, despite getting a place in the name, the ground-up brat bits didn’t deliver much – in terms of flavor or in terms of chewy meaty satisfaction. I would’ve preferred chunks or slices of brat instead. It might be more cumbersome, but it’d also make the brat-chos overall taste less like simply potato chips covered in sauce. It also comes in a significantly large bucket, so prepare to share. 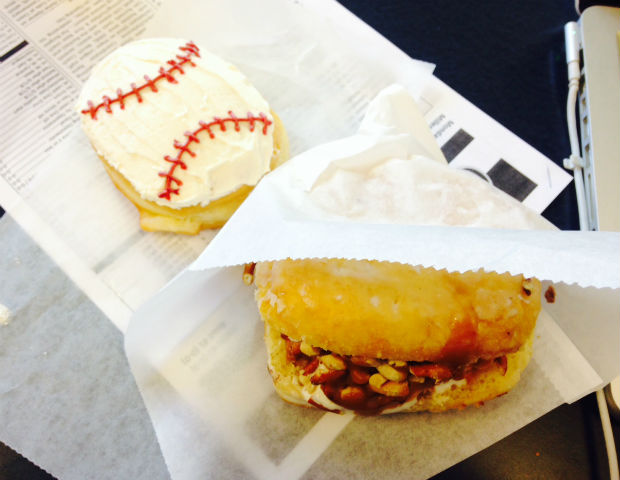 What’s a Brewer fan to do when the beloved home team is down 10 runs before the end of the fourth inning? Shove doughnuts down your throat until you pass out from diabetic shock, that’s what! So it was off to the new Holey Moley stand, located on the field level on the first base side.

Fair warning: Judging by the Opening Day crowd sample size, the place is doing well. I left in the middle of the fourth and didn’t return until about the seventh, and while I was in line, an employee told us that they would likely sell out of doughnuts. Obviously, everything is amplified on Opening Day, but considering its new (and the only Holey Moley stand in the building), I’d bet that long wait holds up throughout the year.

Now, for the food itself, I ordered a vanilla cream doughnut (frosted like a baseball! Aw!) and one of the stand’s doughnut sandwiches. Mine was a peanut butter-pretzel-caramel-custard monstrosity called a Goober Jobber (no matter however you try to pronounce it, the name never rhymes).

Amazingly, the sandwich itself was nowhere near as messily unwieldy as its name – or its looks for that matter. With the paper, the sandwich was a fairly easy handheld snack – and an exceptionally tasty one at that. It was basically a Take 5 bar but with ice cream and the chocolate covering replaced with chewy, delicious donut. The custard provided a nice light contrast (comparatively) to the doughy pastry, and the peanuts and pretzels added a nice crunch – as well as some saltiness to balance out the rest of the sweet.

Make no mistake: It’s very sweet. A sugar bomb, one that I profusely apologized to myself for gorging on. There were a few bites near the end of pure peanut butter, salted caramel and doughnut that I could feel my heart quivering on. But whatever; if I got taken out of Miller Park on a stretcher, at least I was far from the 10-0 slaughtering inside. The heart can only handle so much.