There are many things that make Milwaukee great. One is our custard. Milwaukeeans have been wild about this egg-laced frozen treat since at least the 1930s. But, where did it come from? How is it made? "Milwaukee Frozen Custard" has all that and more.

There are plenty of things that make Milwaukee great. One of them is our custard.

Milwaukeeans have been wild about this egg-laced frozen treat since at least the 1930s. But, where did it come from? How is it made? And what makes this frozen treat one of the most popular Milwaukee attractions?

You’ll find history, fun facts and a delectable guide to custard stands throughout the state in "Milwaukee Frozen Custard" (The History Press, 2016), a book written by Kathleen McCann and OnMilwaukee’s own Bobby Tanzilo.

McCann and Tanzilo will give you the scoop on custard history and culture at a book launch event at Boswell Books, 2559 N. Downer Ave., on Tuesday, Nov. 22, beginning at 7 p.m.

We caught up with McCann in advance of the event with the hope that she might share some custard secrets.

OnMilwaukee: Of the many topics you could choose to tackle, why custard?

Kathleen McCann: Why not? And by than I mean that, as a lifelong resident, frozen custard is ubiquitous and has always been here in my lifetime. Although I grew up on mostly cheap ice cream eaten at home – the kind that comes in a big bucket – or went to nearby A&W or Dairy Queen, we did get to Leon’s, Al’s or Kopp’s on occasion. I knew it was better tasting, but didn’t really know why. I’m not sure I was always even aware it was "frozen custard" – we probably called it ice cream. Before writing the book I knew that there was frozen custard elsewhere in the country and that there were a lot of stands here, and that’s about it. What interested me in writing the book was my own curiosity; wanting to learn more. It’s my hope is that readers will take that journey with us because it’s part of our cultural heritage – we should know more. 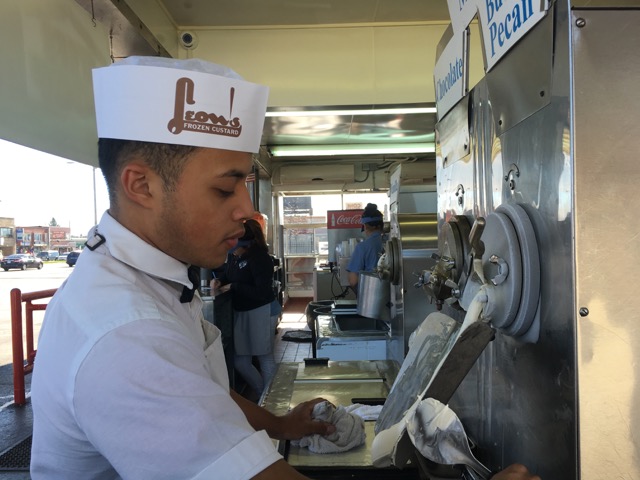 There is always speculation about how Milwaukee became the frozen custard capital of the world? Do you have your own theory?

We asked the experts – the guys who have been in this business for nearly a half century, and their parents before them. It is the sheer number of stands and the fact that they maintain a high standard of quality. My own theory? When we love something we grab on to it and hold on and aren’t willing to let it go even as the next big thing comes along. The custard stand owners are like us; Tom Linscott (of Gilles) talked about riding out several waves of frozen yogurt fads over the years he's been running Gilles.

What's the most interesting thing you discovered as you wrote the book?

The real discovery was how many there used to be – dozens and dozens of stands. We Milwaukeeans had a seemingly insatiable appetite for frozen custard through the 1940s and ’50s and later. And people would travel here to buy it as well. Tastes changed and economics made it impossible for them all to survive. I would liken it to the coffee roasters phenomenon of today. Or craft beer.

In addition to sheer quantity, it is said that all that competition helped spur them to a produce a high quality product – we do it here better than anywhere else. For many of us Midwesterners we are reluctant to believe that or chock it up to hyperbole. People often say custard came from New York and that’s true, but we perfected it and sustained that high quality for the most part. On the East Coast, the popularity and adherence to the original ways of making it associated with quality, has ebbed. So if you want to taste true frozen custard at its best, it’s best to do it in Milwaukee.

One of the interesting things about custard that most people don't think about is that virtually no one makes their own custard mix. Everyone buys it pre-made and then modifies it. Did you get any insight into how different stands modify their custard mix to make it distinctly their own? Did anyone reveal their "secrets"?

All custard stands here buy their mix premade from suppliers in Wisconsin or Illinois from a pre-specified recipe or to their own specification. The mixes come in neutral or chocolate, and most of the taste that differentiates one frozen custard from another are the recipe tweaks done at the stand. None of the stand’s owners would reveal those tweaks. But all in all, secrecy isn’t really part of "the custard scene."

Ron Schneider, who runs Leon’s and is Leon Schneider’s son, says he would be willing to teach anyone how to run a custard business if they were serious about it and wanted to do it properly. His dad, Leon, helped many people get into the business – like Elsa Kopp (Kopp’s) and Al Lach (Al’s) and others. And Leon learned from Paul Gilles (Gilles), who learned from Joe Clark (Clark’s/Dutchland Dairy).

How it is done is no secret, and we delve into many aspects of custard making – the continuous flow machines, the dairy mixes. We could have included even more detailed information on those topics, but every book has a page limit, so we limited it to what we thought the average reader would want. But Ron also has said, "there is no gimmick." It is what it is – and you keep a laser focus on quality and don’t cut corners. 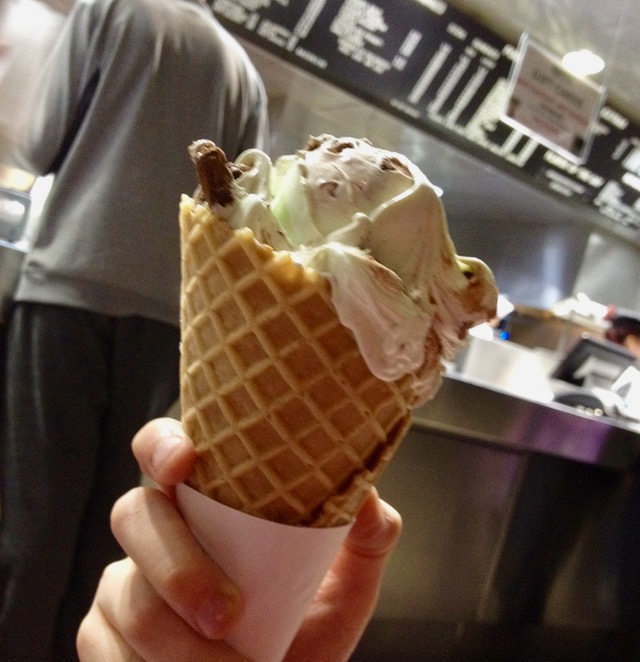 The food and beverage industry is filled with colorful characters. Who stands out for you on the custard scene?

I would describe the owners of the stands as mostly just regular folks who are just really focused on running their small businesses. Their businesses are successful and many of them have been at it for decades or are second or third generation. Yet you wouldn’t be surprised at all to walk up to the counter or window on any given afternoon to find the owner himself or herself taking your order. It’s an all-consuming sort of job.

Yet, they were willing to spend the time to talk to us and share their thoughts and we really appreciate that. I would say the only things that they had differing opinions on was serving food – some want to keep it to a minimum, others embrace it – and the machines. Some would never use anything but the classic continuous flow machines but others think soft serve machines are more economical and practical.

The custard landscape has changed quite a bit over the years. Can you talk a bit about that? How many stands are left in Milwaukee today?

There are about 50 current stands listed in our book’s guide. Most are in southeastern Wisconsin or a short drive, plus a few in more touristy spots like Door County. I’m sure there are many others in Wisconsin, but that was our focus. In the past there were dozens that opened, closed and then others opened in their place. The number stabilized after the drive-in scene of the ‘40s and ‘50s waned. The profit margin isn’t big, and frankly a few classic stands have let their quality slip, so who knows – it is possible they could close. But new stands have also opened, such as Kraverz in Menomonee Falls, AJ Bombers on Water Street and the Holey Moley stand at the stadium. And the Bartolotta’s entry into custard with Northpoint at the lakefront and inside the airport, in the U.S. Bank building and Osgood's at the Mayfair Collection. That’s a local chain known for fine dining branching into frozen custard.

Everyone has one. What's your favorite custard flavor?

As the co-author, I’m going to be like Switzerland on this one. Everyone has their own favorite and it is totally subjective. And people are very loyal to their favorite. A lot of it has to do with proximity to home, what you grew up eating, and the service – are the people friendly and good at service. It’s taste, convenience, price, tradition, memories and family all mixed up together. It colors people’s opinions.

I recall going to Leon’s when my grandmother was very sick and at the nearby hospital. I’ll never go to Leon’s and not think of that. And in writing this book I discovered some gems I’d never even heard of, but of course lots of people had. I challenge those in a rut to venture out, use the guide, and try a new one. Or two.

Fred's Custard & Grill is for sale