The backstory behind Milwaukee's bustiest poster

If you're a Milwaukeean of a certain age, you may remember the poster that Steve Ewing created as a joke in the mid '80s. It hung in the men's room of the old Bangkok Orchid, and it's still on the walls at The Tracks in Riverwest.

If you’re a Milwaukeean of a certain age, you may remember the poster that Steve Ewing created as a joke in the mid ‘80s. It hung in the men’s room of the old Bangkok Orchid, and it’s still on the walls at The Tracks in Riverwest.

It’s just a photo of the Domes superimposed over the Downtown skyline. In yellow and hot pink, the caption reads: "MILWAUKEE. Its tits!"

Never mind that "its" is missing an apostrophe. It was 1985 – anything went back then.

Not surprisingly, the racy concept was hatched over drink.

"My friend and associate John Haupt and I were having cocktails," recalls Ewing, a music promoter and long-time agency owner. "Johnny had this idea, he says, ‘Hey, those domes, they don't just look like domes, they look like boobs.’"

Ewing and Haupt decided they preferred a bustier slogan over the "A Great Place On A Great Lake" motto that was being used at the time to describe Milwaukee, and of course, they saw dollar signs. The hired a photographer, art directed the poster and peddled them around town.

All 2,000 of the posters they produced were sold. 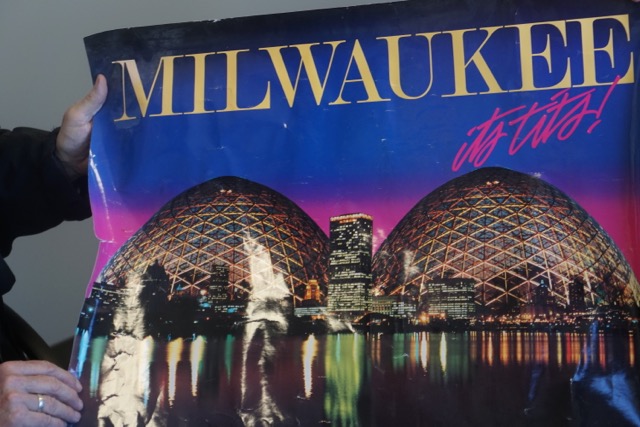 "They would show up in the wildest places," says Ewing. "I knew that there was one in Washington, because I had somebody that went out to see their congressman, and there it was on the wall. It was in Chicago. It was in L.A. It was even more popular, I think, outside of the City of Milwaukee."

A few of these relics remain in Milwaukee – you can see one hanging on the wall by the kitchen at The Tracks. "It does not offend many, and is appreciated by fine consumers of ribald wall art," says co-owner Mike Rebers. "I assume it was purchased in a high-stakes card game in the early '90s." 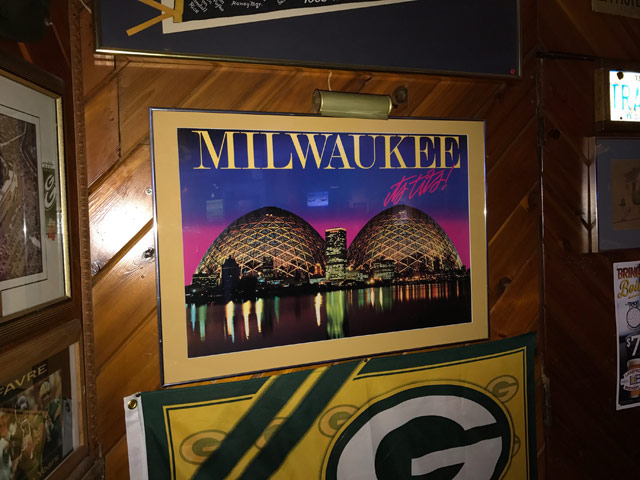 The famous poster, framed at The Tracks.

Ewing has just one, tattered, rolled-up poster left. It was sitting at his cabin until the Northwoods until we asked him about it.

Did he get any push back from the Domes on this very unlicensed art project?

No, says Ewing, "But I was thinking, if those guys were smart ... I know they had all the problems out there with the money. I would say reintroduce the posters, bail the place out."

Maybe turn it in a T-shirt?

Maybe not. Ewing says he didn’t consider the poster a very serious career-defining project. "We kind of did it on a whim. We didn't make any money, because it cost a lot of money to make the posters."

After all, in the pre-Photoshop days, producing a full-color photo poster wasn’t exactly a drag-and-drop process. They had to cut all the individual images out, photo-composite them and typeset those crazy ‘80s fonts. The bottom of the poster lists its contributors. "Produced by the Boob Brothers" clearly refers to Ewing and Haupt.

"We sold it at all the record stores and stuff, and people loved it," says Ewing, 68, with a devilish smile. "It was irreverent, and to do it way back in the day and get away with it, I think that was pretty cool. It was fun."

So fun, that Rebers says people ask him all the time if they can buy his copy. The answer is no.

"I'll tell you what I tell all people that ask about purchasing it," he says. "It belongs in a museum."