So why is mass timber construction all the rage? And why are there two mass timber buildings in the heart of Downtown being planned, including one of the tallest in North America? We asked Tim Gokhman, managing director of New Land Enterprises, which is planning both structures.

It seems almost counterintuitive, doesn’t it, to build with wood? After all, when steel and reinforced concrete came on the scene, we thought we’d solved the problem of fires and of limitations on height. Steel and concrete would set us free.

And it did. One look at a major city skyline is all you need as proof.

So why is mass timber construction all the rage now? And why are there two mass timber buildings in the heart of Downtown being planned, including one of the tallest anywhere? 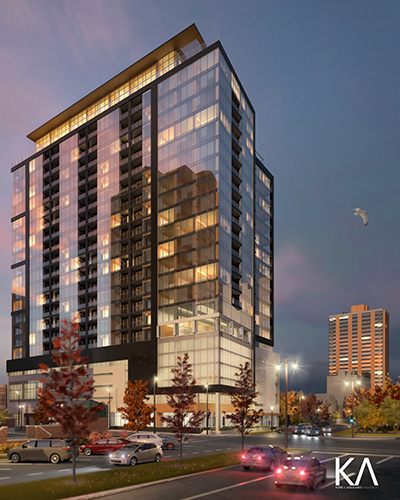 We asked Tim Gokhman, managing director of New Land Enterprises, which is planning both structures.

While a seven-story office building was first floated by New Land to replace the building that long housed Renaissance Books at 834 N. Plankinton Ave., that project has been leapfrogged by the much more ambitious Ascent, which will rise on the site of the former Edwardo’s Pizza at 700 E. Kilbourn Ave.

New Land expects to break ground on the 23-story, 248-foot Ascent residential tower in spring and at the moment that would make it the tallest mass timber structure in North America.

The tallest in the world is the 280-foot Mjøstårnet in Brumunddal, Norway, and the tallest in North America at the moment is Vancouver’s 174-foot Brock Commons Tallwood House, a university dormitory.

(NOTE: On Feb. 3, New Land applied to the city for permission to increase the height of Ascent to 285 feet. If approved, the building, when finished, would become the world's tallest mass timber structure.)

Neither of the New Land projects, however, will be the first mass timber building in the city. That distinction goes to Timber Lofts, a four-story 60-unit apartment building at 300 W. Florida St., in Walker’s Point, designed by Engberg Anderson, built by Catalyst Construction and developed by Pieper Properties.

"The very first thing for us was the aesthetics," says Gokhman. "Because we'd just never seen anything like it before. The one that got me going was River Beech Tower, designed by Perkins + Will, and Thornton Tomasetti, who also happens to be our structural engineer.

"It was a case study (unbuilt) for a mass timber high-rise in Chicago on the river and it’s just incredible. The aesthetics are just so neat." 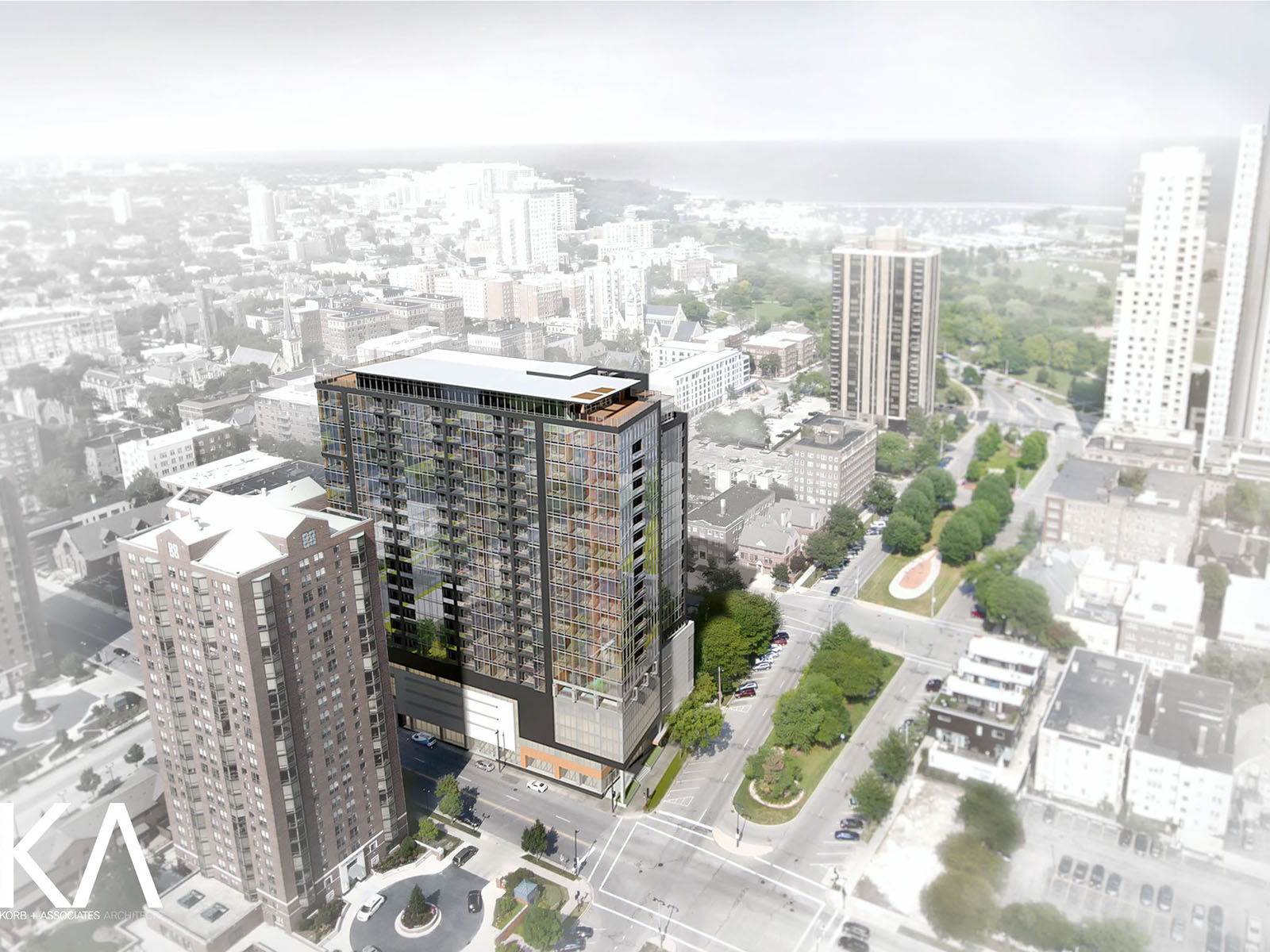 In fact, Ascent, designed by New Land’s preferred partner architect Korb and Associates, is stunning; a sleek, modern tower with rich, natural-looking wood finishes. It feels like the best of both modern and classic looks.

The tower will start with a seven-story concrete parking structure (with 8,000 square feet of street-level retail and an elevated indoor/outdoor pool) as a base. Then, with the exception of concrete elevator and stair shafts, the top 16 floors will consist of 230 apartments built entirely of wood.

By wood, it should be clear, we’re talking about cross laminated timber (aka CLT), not plywood from the local lumber yard.

CLT is prefabricated, engineered wood panel that is both lightweight and strong and offers elevated acoustic and thermal benefits. It is made by layering kiln-dried lumber in alternating directions and pressed together with structural adhesive. 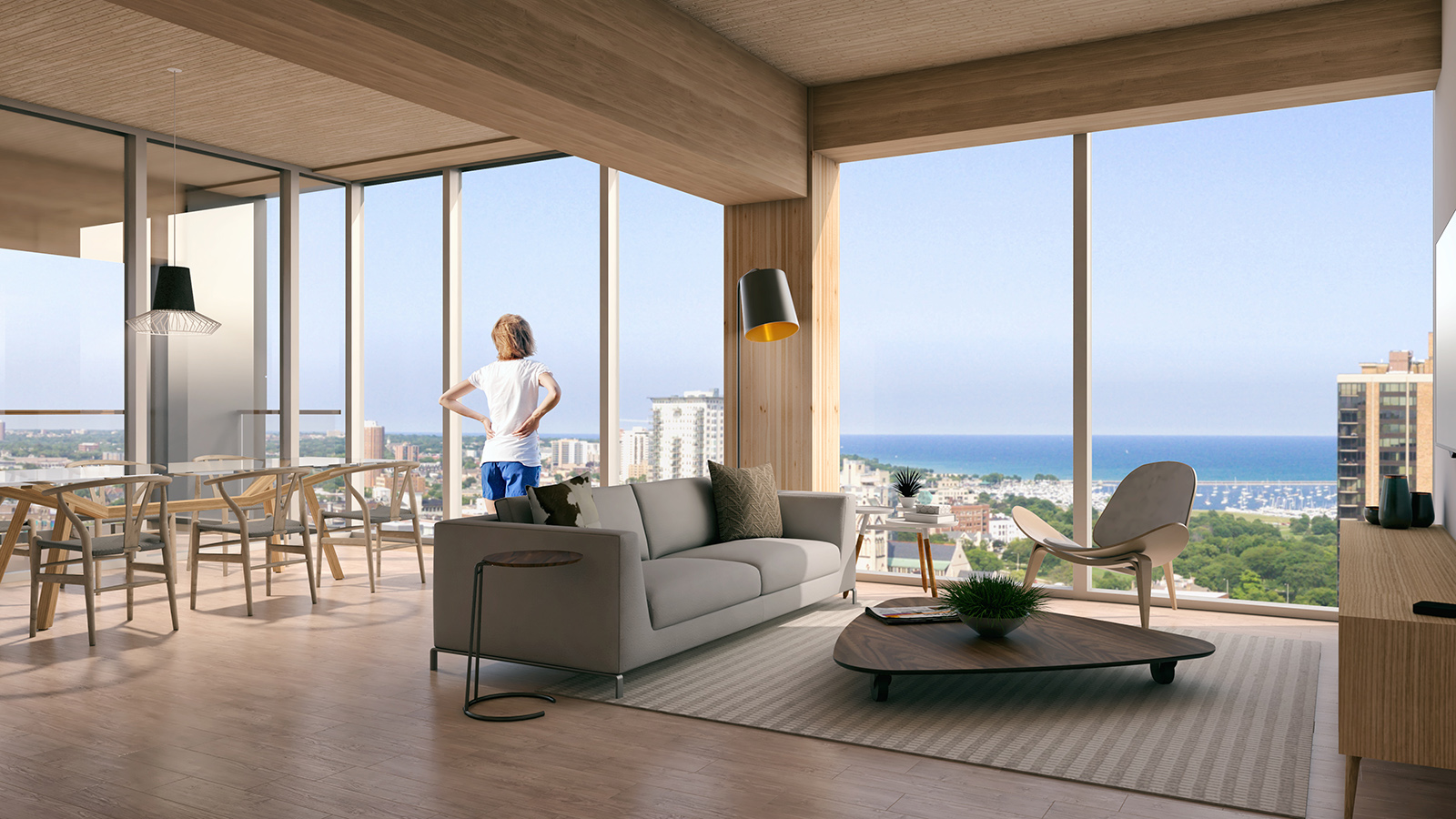 "While the U.S. predominantly uses pine and douglas fir for CLT, we will be using spruce, which provides a lighter and cleaner aesthetic," says Gokhman.

"Typically what's being used in mass timber and CLT production right now is softwood. There is research going on with how we could use hardwoods, but right now that supply is not there."

But, you ask, didn’t we stop using wood because of the threat of fire? The truth is that threat has survived the transition to steel and concrete, though certainly those materials helped. But CLT isn’t the same animal, says Gokhman. 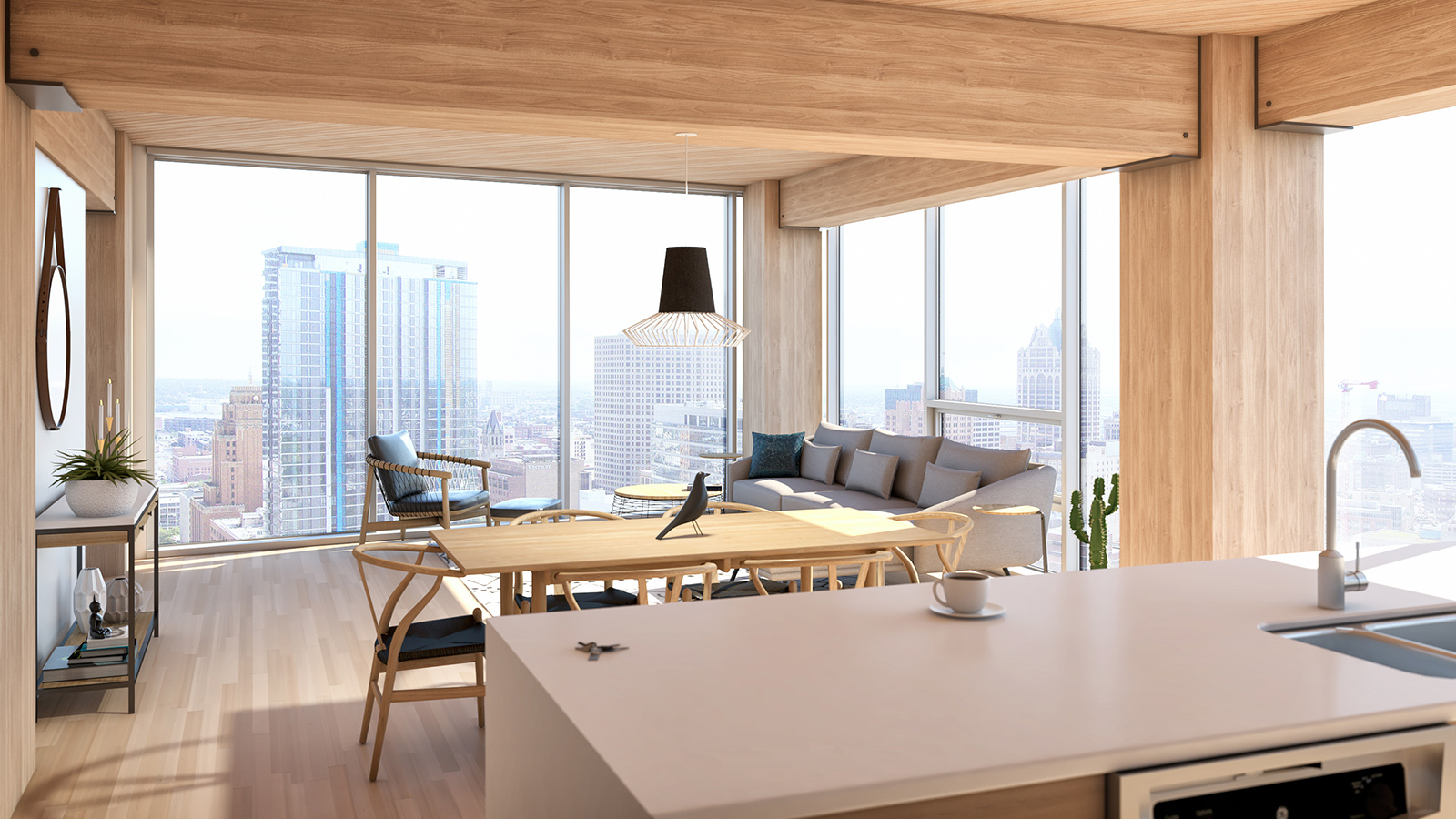 "Any building, whether mass timber, concrete or steel, has to meet certain fire codes ... that's in the zoning code. No one in the United States met it yet (with mass timber) because no one's tried. And so in that sense it hasn't been done.

"Brock Commons achieved its fire rating by wrapping all the mass timber in three layers of drywall, which I don't want to say defeats the purpose because there are still environmental benefits to building with timber, but to lose the aesthetics to us seems insane."

So, how did New Land get the go-ahead to use CLT that’s not wrapped in drywall?

"We did the world's first three-hour fire test," Gokman says. 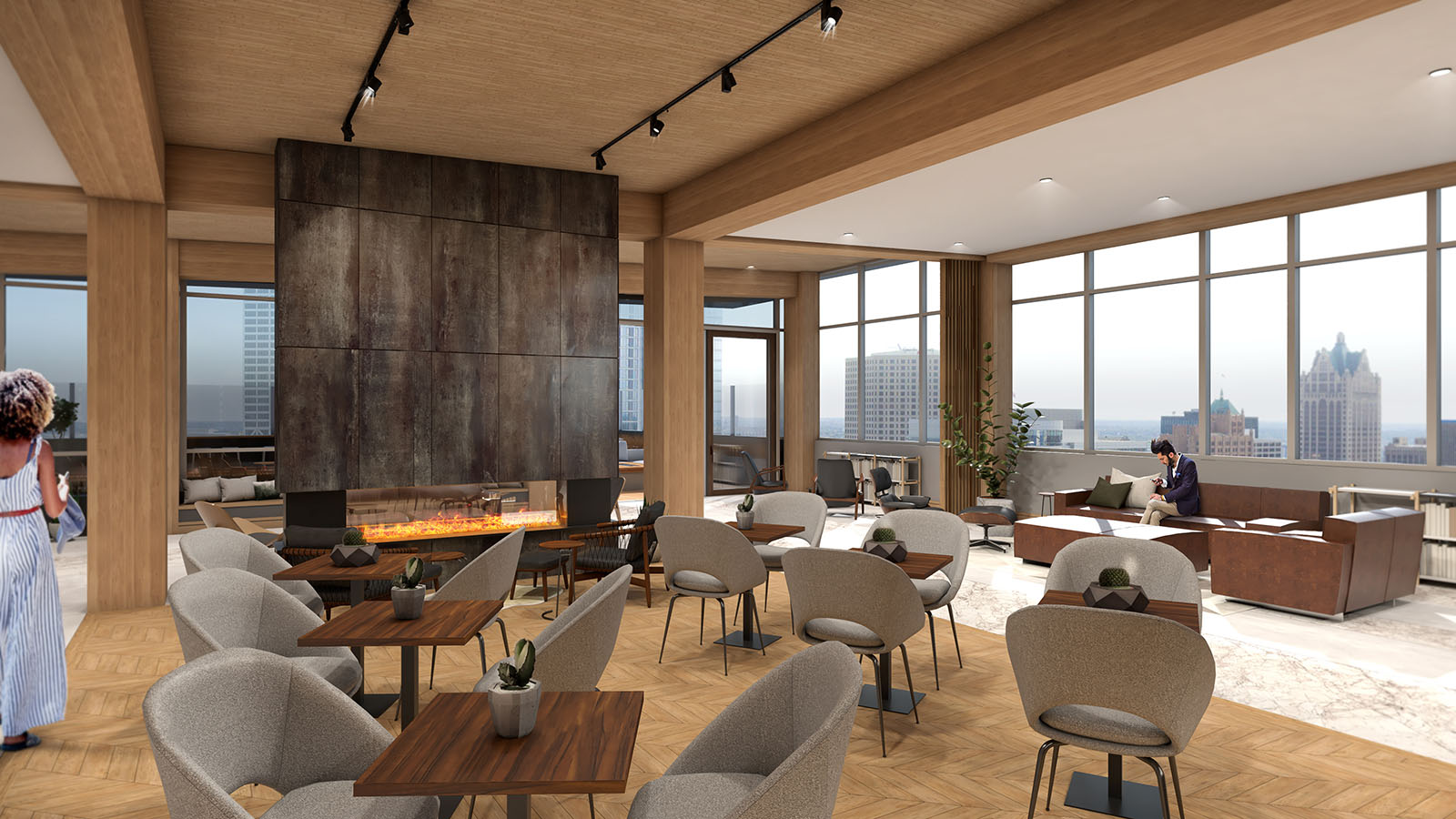 New Land selected the panels it wanted to use and sent them to a designated laboratory, which, fortuitously, was a U.S. Forest Service lab located on the UW-Madison campus.

"They have a state-of-the-art lab where they do things like this," Gokhman says. "Members of our team went, and they sat and waited, and they described it as two hours and 45 minutes of sitting around and 15 minutes of agony," as they watched the panels get pummeled with flames.

"They're not able to release the official results yet, but the initial feedback is very positive."

When I recount for Gokhman a story I’d been told about a 19th century Milwaukee building that survived a brutal fire because it was constructed with massive, old-growth timber, instead of steel, which would’ve failed under the same conditions, he’s not surprised, as I had been when I’d first heard it. 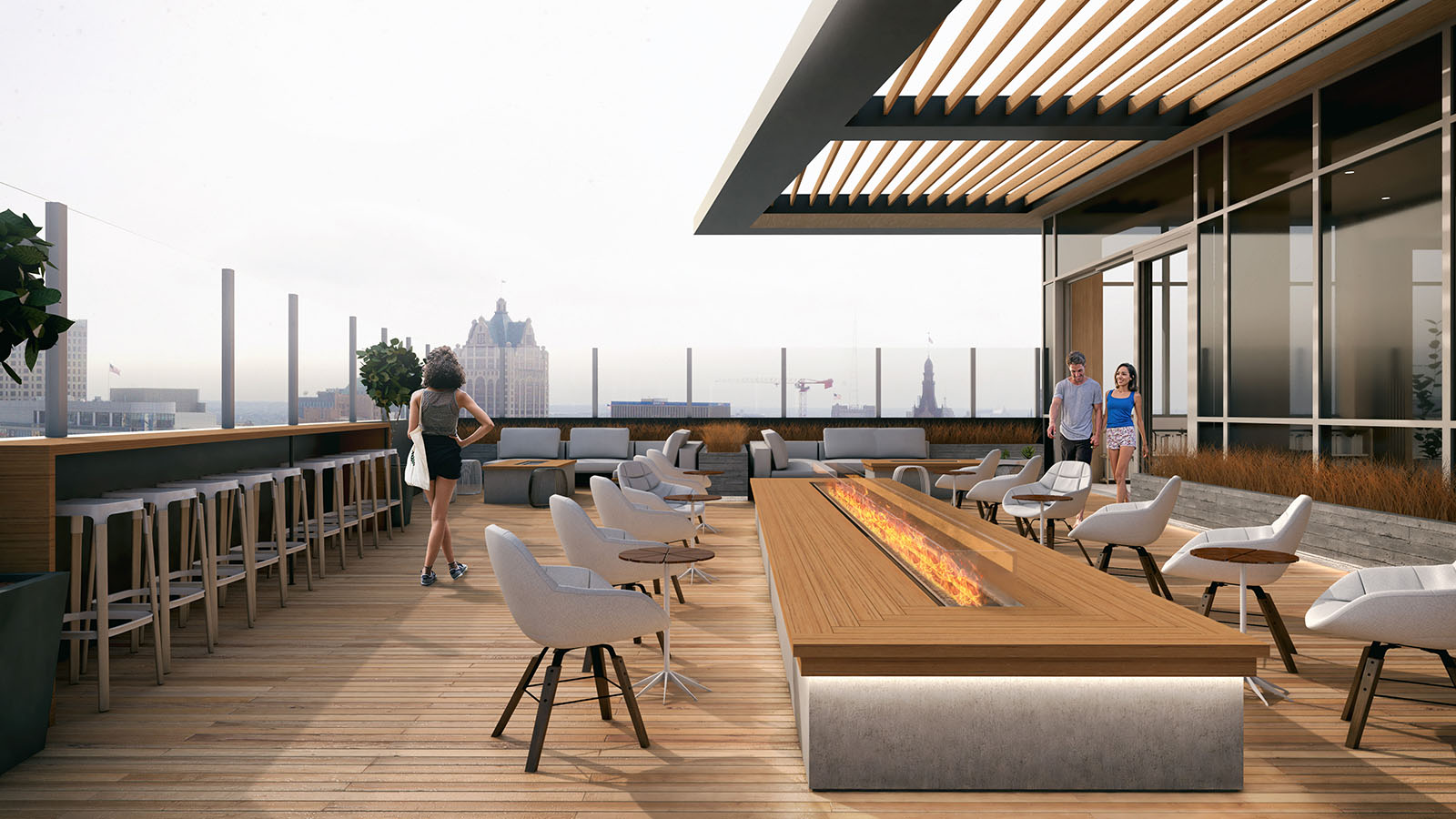 "That's exactly how it works," he says. "Steel will fail at about 1100 degrees, and during our fire test, the temperature exceeded that. They had a rod inside the timber (near) the core of the wood, and it was below 100 degrees. Wood is not a good conductor; as a result it's a great insulator.

"If you look at any forest fire and at a cross section of the tree, it right away tells you the same story. The inside of the tree is always intact. It has to do with the density and that outside char layer. But the code already knows this. It's not like the construction industry doesn't know this. We can't have in our building any exposed steel. It has to be protected. So either you spray it or you bury it inside the wood. So the steel is protected by the wood."

CLT is also strong and, as important, lightweight. That means buildings weigh less, which means their foundations can be more streamlined and they perform better against seismic forces, thanks to the ratio of their strength and weight.

In fact, there’s a plan afoot to build a more that 1,000-foot, 80-story residential tower in London.

"The limits are not structural," says Gokhman. "The limits are economic. Given what we know about engineering, we feel like right now, we're at the cusp. I compare this a lot to electric vehicles. There will be breakthroughs one after the other where people will just say, 'oh, wait a minute, this can be more efficient. We can tweak the design.'

"A Canadian manufacturer of mass timber is opening a plant in Bentonville (Arkansas). But they're not just temporarily opening up that plant. They're opening up that plant and then it runs. So there's an addition to the supply chain. It's going to keep happening. And as that happens, like anything else, once you start manufacturing things en masse, it becomes more cost effective."

And we haven’t even talked about the sustainability of timber construction, of the carbon emissions saved during production of materials and during construction. Check out this video, which lists the five tallest mass timber buildings and notes how much carbon was avoided in their construction:

Nor did we mention that timber buildings can be constructed more quickly, saving money.

"(It’s got) everything," says Gokhman, "speed, labor force, safety, cleanliness and then, of course, sustainability."

So, where is New Land in terms of its two mass timber projects?

Speaking about the Plankinton Avenue office building (a conceptual rendering of which is below), Gokhman says, "We're working on it. It's counterintuitive but it's more challenging than Ascent. It's just a small site. There's a lot of math to be done on what is the right-size building. 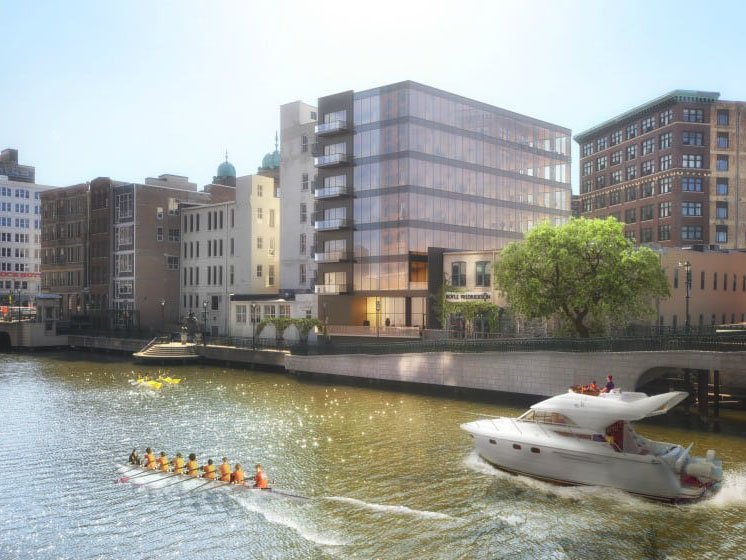 "You go big, you have costs related to a tall building with a crane and foundation, etc. You go small, you start losing the economies of scale. So we're trying to find the golden middle."

Ascent, on the other hand, has gotten approval and preliminary work has already begun.

"We're driving piles to test the resistance to the soil," says Gokhman. "We'll get that geotech data back to understand how deep the piles have to go, and then we will start deconstruction of the (existing) building.

"The actual construction, we are planning to start in June. Our construction timeframe is about 21 months, and we want to deliver in spring, so starting in June makes sense. Plus we are just submitting the information to the city for a construction permit, that's going to take about four months. Plus we have to finish raising the equity and source the construction debt."

In the meantime, New Land has been on the circuit, attending mass timber conferences around the globe, including in Dubai in 2018. Gokhman will speak at the International Mass Timber Conference in Portland, Oregon, in March.

"It's astounding," he says. "We go to places and you meet people from all over the world and it's incredible to hear, ‘oh, you guys are the guys from Milwaukee doing the timber thing.’ People all of a sudden know Milwaukee."

According to Gokhman the height of Ascent and the fire testing are key in drawing attention to Brew City in the industry.

"I think that's really where the international attention is on us," he says.