Although the Negro National League Milwaukee Bears hardly existed for one season and got haphazard coverage from local media, the team isn't forgotten. A group of Marquette University students are attempting to bring some belated attention to the Bears.

Every year, the Brewers wear throwback uniforms with the name "Bears" on them and pay homage to one of the oldest, briefest and most obscure chapters in local sports history.

The Milwaukee Bears were a Negro National League baseball team that competed for just one season – and did not finish that season – in 1923. They struggled on the field, going either 12-41 or 14-32, depending where you look, in their truncated campaign; they struggled in the stands, unable to draw a crowd to their home games at Borchert Field, even though the Brewers were at that time only a minor-league club.

Because they played less than a full season 93 years ago and were marginalized both in the sports pages and by society in general, virtually nothing remains of the Bears. They’ve been nearly forgotten. The Milwaukee County Historical Society, the Wisconsin Black Historical Society, the Milwaukee County Library, even the Negro Leagues Baseball Museum – all were sympathetic to the cause of learning more about the Bears, but none could offer much institutional information or material to explore.

"The Brewers celebrate the Bears every year," said Dr. Raymond Doswell, vice president and curator of the Negro Leagues Museum. "But in truth, little is known of them because they were short lived."

While the Bears were mostly neglected, they did receive occasional, minimal coverage from the city press at the time. In 2005, OnMilwaukee writer Dan Curran combed through countless archived newspaper articles to chronicle one of the best accounts of the Milwaukee Bears’ fleeting existence that we have today.

Imagine the media frenzy that would have ensued had a baseball team in Milwaukee hired a baseball immortal as a player-manager. If the team had also played against all-time greats, you'd expect to see a big write-up in the local newspapers.

But such attention did not come the way of the 1923 Milwaukee Bears, who could be considered the Negro League equivalent of the team described above. Though not entirely ignored by the local press, the team was hardly the focus of much coverage.

The team was Milwaukee's franchise in the Negro National League, which is considered the first of the "major" Negro leagues. Milwaukee got a franchise for the league's fourth season. The Bears played their games at Athletic Park (later renamed Borchert Field), near 8th and Chambers, but didn't even finish the season, playing their last series in late July 1923, before folding.

A review of the daily papers from 1923 indicates that the coverage of the Milwaukee Bears was haphazard. Sometimes the papers would run a game story and full box score. Other times, a Bears game only earned a brief mention. More often than not, particularly when the Bears were on the road, coverage was non-existent.

The team was a major league franchise with a prominent manager that faced some legendary opponents. However, the papers focused most of their attention on the minor league Milwaukee Brewers, writing features and a daily analysis. The Journal usually gave front-page treatment to Brewers game accounts and box scores.

Even local amateur sports got more play than the Bears. Both the Journal and the Sentinel published game accounts and box scores of the municipal hardball leagues. If you were wondering which Catholic school won the parochial baseball league (Gesu), or the results of the annual Washington High freshman-sophomore track meet (sophs won easily), you could find it in the paper. The Sentinel even had a weekly column devoted to gossip in the local sandlot leagues.

According to baseball researcher Phil Dixon, the scant media attention paid to the Bears was typical treatment for black baseball teams. "Black teams were always under-covered because they were undervalued," says Dixon, a member of the Negro Leagues Baseball Museum advisory board and author of the book "The Negro Baseball Leagues: A Photographic History."

"You may have (had) 3,000-4,000 at an event (and) it wouldn't even get mentioned in the newspaper. That was real common. They didn't see the importance," says Dixon. "That's why teams didn't get the credibility, why they didn't get the coverage."

The baseball great who led the Milwaukee Bears was player-manager Preston "Pete" Hill. Hill had been a star outfielder in his prime with two of the top teams of the early 20th century, the Philadelphia Giants, and the Chicago American Giants.

"Pete Hill should be in the Hall of Fame," Dixon says unequivocally. "He was the most prolific hitter on every team he played. It shows how little people know about black baseball."

Dixon is currently doing research to establish that Hill got over 4,000 hits in his career. If it is true that Hill attained the 4,000 plateau, it would make him the Negro League equivalent of Ty Cobb or Pete Rose, the only men to reach 4,000 hits in Major League history.

But Milwaukee media missed the opportunity to note that an athlete of Hill's stature was in charge of the local team. To them, Hill was just a last name and a position in the few box scores they published -- "Hill, rf"

The team played one of its first series in Milwaukee against the Chicago American Giants, owned and managed by Andrew "Rube" Foster. To say that Foster was a giant in the annals of the Negro leagues would be an understatement. There is no equivalent to Foster in white baseball. He was a dominating pitcher and a great hitter in his playing days. He later became a championship-winning manager and team owner.

But most significantly, Foster was the founder, benefactor and president of the Negro National League in which the Bears participated. For this distinction, Foster is called "the father of Negro league baseball."

Foster was inducted into the National Baseball Hall of Fame in 1971. The Sentinel did acknowledge that Foster's Giants were well known to local fans. Yet his presence in Milwaukee merited only brief mentions in the papers.

The Milwaukee Bears faced some other baseball legends during its one season of play. Wilber "Bullet Joe" Rogan was a standout pitcher and hitter for the Kansas City Monarchs. "He may have been the best all-around baseball player of all time, better than Babe Ruth," says Dixon, referring to players who excel at both pitching and hitting. Rogan was elected to the Baseball Hall of Fame in 1998.

Another opponent of the Bears in 1923 was the St. Louis Stars, who had a second-year player named James "Cool Papa" Bell. Known for his incredible speed, Bell is considered one of the fastest men on the basepaths in the history of the game. He was inducted to Cooperstown in 1974. 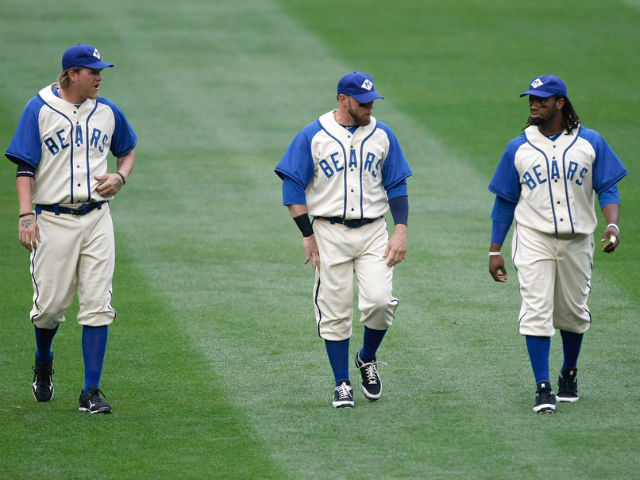 Player statistics for the Bears are not available. Based on the batting order of the few box scores published in the Milwaukee papers, some of the top offensive players for the Bears would have been first baseman Percy Wilson and second baseman Anderson Pryor. Shortstop Leroy Stratton was "said to be the best looking infielder among the colored leaguers," according to the Sentinel. A man named Fulton Strong was likely the team's top pitcher.

If statistics were available on the Bears, overall they would probably not amount to impressive numbers. The Bears were a mediocre team, finishing their aborted season with a 14-32 record. The first-place Kansas City Monarchs finished 57-33 that year.

Dixon has financial data for the teams of the Negro National League and it is clear from these numbers that the Bears were a struggling franchise. Dixon says the Bears made about $3,000 a month during the three months they played. By comparison, Dixon says, the two top franchises in the league, the Chicago American Giants and the Kansas City Monarchs, were making about $7,000-$8,000 per month that season.

When Dixon met one of the Milwaukee Bears, former pitcher Perry Hall, he used the encounter to rib Hall about a tremendously long home run he had given up to Kansas City Monarchs' star Oscar Johnson in 1923.

"I said 'hey Perry, did you hear?' He said 'hear what.' I said 'they just found the ball that Oscar Johnson hit that home run off you ... it just landed.' He got a kick out of that, that anyone recalled a home run he gave up in 1923. He thought that was pretty humorous."

An answer to this mystery may lie in the fact that "Giants" was an overwhelmingly popular name among black teams during this era. With its widespread use by Negro teams, the name "Giants" may have became synonymous with black baseball teams. Dixon confirms that the name Giants had become a generic term for a black baseball team. It appears that the Milwaukee papers had labeled the Milwaukee team as being the local version of the "Giants."

Not only are the Milwaukee Bears a forgotten part of local sports history, they were scarcely noticed back in 1923. But a group of Marquette University students are attempting to bring some belated attention to the Bears.

In 2004, members of the club baseball team at Marquette University paid a tribute to Milwaukee's forgotten boys of summer, sponsoring a summer league team called the Milwaukee Bears, in honor of Brewtown's Negro Leaguers.

"We needed a team to play ball with in the summer. To do it in a way that honors the guys who played on that team is even better," says Joe Hasek, a junior pitcher for the Marquette club team. "A good way to remember the team is to recreate them."

Hasek says the team competes in the Land O'Lakes baseball league, whose season starts in mid-May and runs through August.

The club also plans a research project that would turn into a presentation for youth baseball players.