Mina showcases Basque fare, both on their menu and at upcoming dinner

Travel to Europe might be off the table for the time being, but a culinary-based escape to the Basque region is possible thanks to the folks at Mina, a newer concept at the Crossroads Collective.

Travel to Europe might be off the table for the time being, but a culinary-based escape to the Basque region is possible thanks to the folks at Mina, a newer concept at the Crossroads Collective, 2238 N. Farwell Ave.

Not only does Mina showcase Basque-inspired fare on their everyday menu, but they will be hosting a special Basque dinner on Aug. 30 which will allow diners to immerse themselves in a gustatory exploration of the unique region.

The Basque region, an area occupying both the Northern coast of Spain and the Southwestern coast of France, is well known for not only its beautiful landscapes, but also for its impressive collection of Michelin-starred restaurants and traditions like pintxos, one or two bite snacks popularly served in bars and taverns throughout the region.

Pintxos are similar to tapas, but generally smaller, and largely function as after work appetizers consumed with accompanying beverages before a more traditional dinner (much like the tradition of aperitivo in Italy). 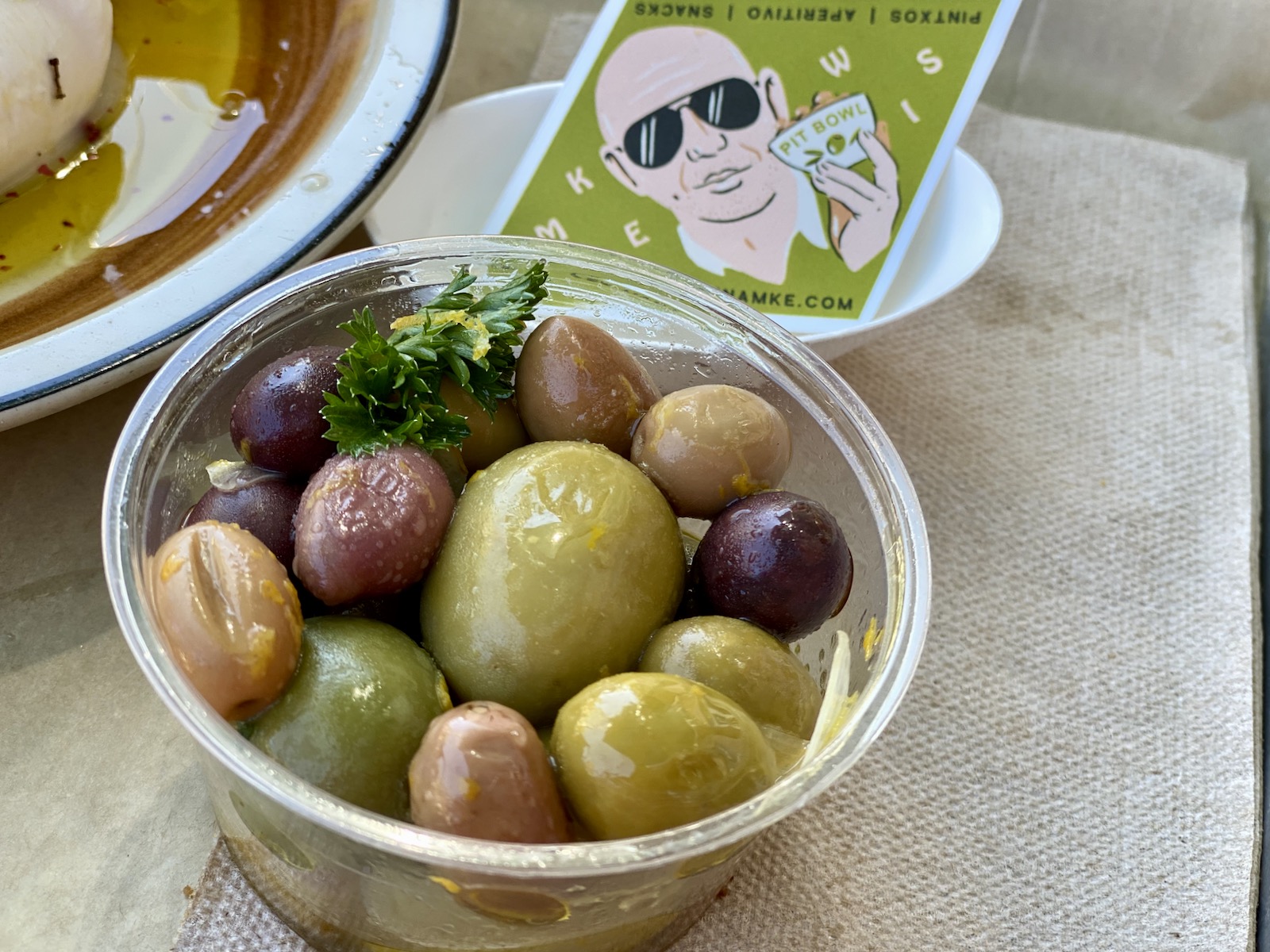 Mina owners Ryan Hoffman and Patrice Gentile took inspiration from the Basque region during their travels in Europe and have applied it in their approach to the cuisine at Crossroads Collective.

"Our menu has really leaned harder into the Basque region," says Hoffman. "And we’ve focused a portion of our menu on pintxos, which are a really fun way to sample a variety of items in a single trip. It’s also a great way to feel like you’re indulging in shared small plates without actually sharing."

The pintxos menu at Mina change frequently, but currently feature a variety of options from French eggs, medium boiled and served with cornichons, grainy mustard and pickled shallots ($3 each, pictured below) and medjool dates stuffed with Merguez sausage ($2 each) to chickpea fritters with preserved lemon ($2 each) and sweet piquillo peppers stuffed with Bonito tuna, potato and egg ($3 each, pictured below). 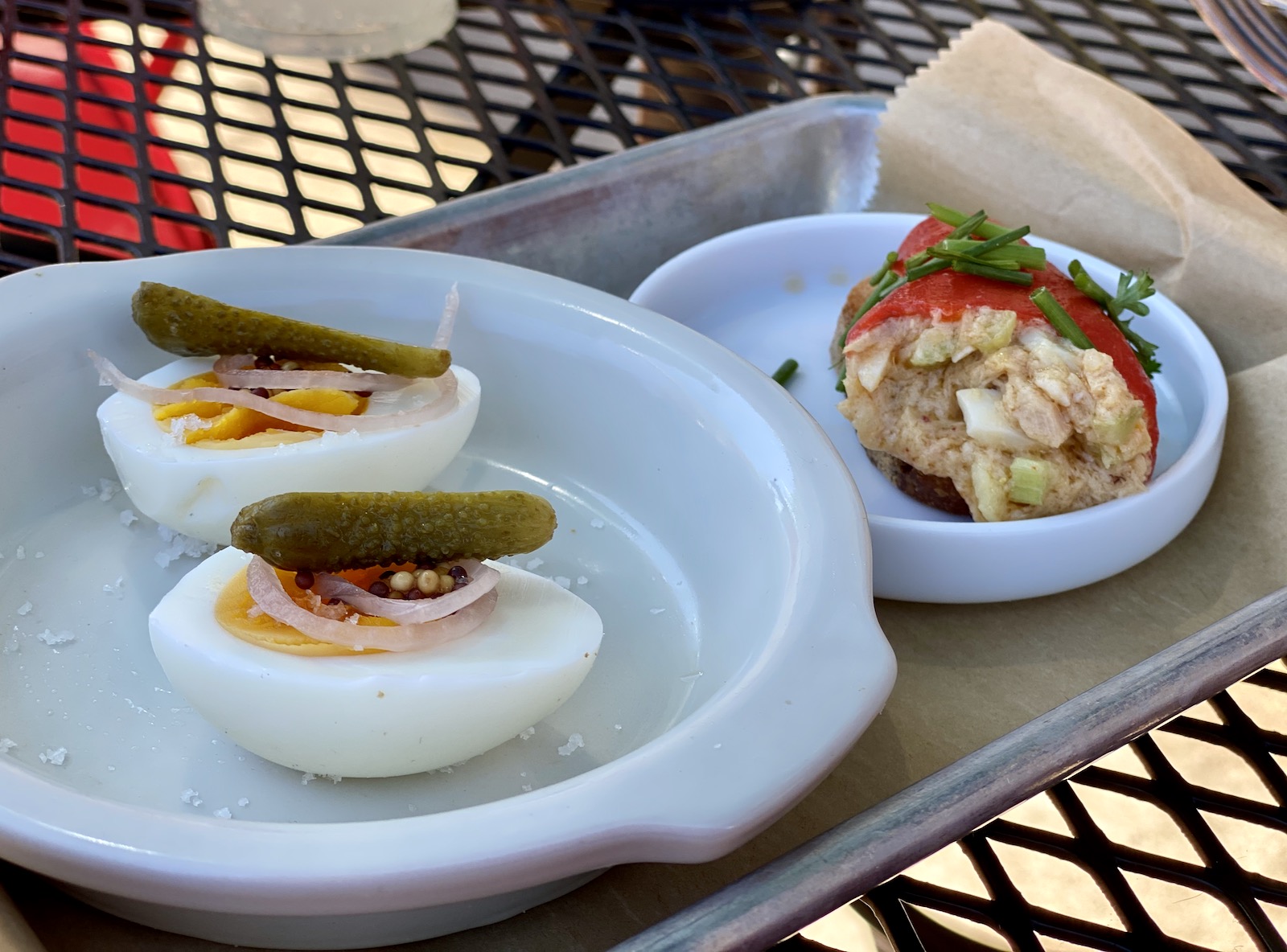 There’s also the "Pintxo Party" for $10, which allows you to sample one of each pintxo, along with a small dish of marinated olives. It makes for a great light lunch, afternoon snack or even a happy hour date with friends from your pod.

From there, the Mina menu branches off into snack plates (featuring meats, cheeses and bread) and beautiful spreads served with toast made from Rocket Baby French Country loaf. Take the BCR Spread made with white anchovy and garlic melted into olive oil and folded into whipped ricotta ($8); it’s light and fresh and would be perfect with a glass of rose or sparkling wine. 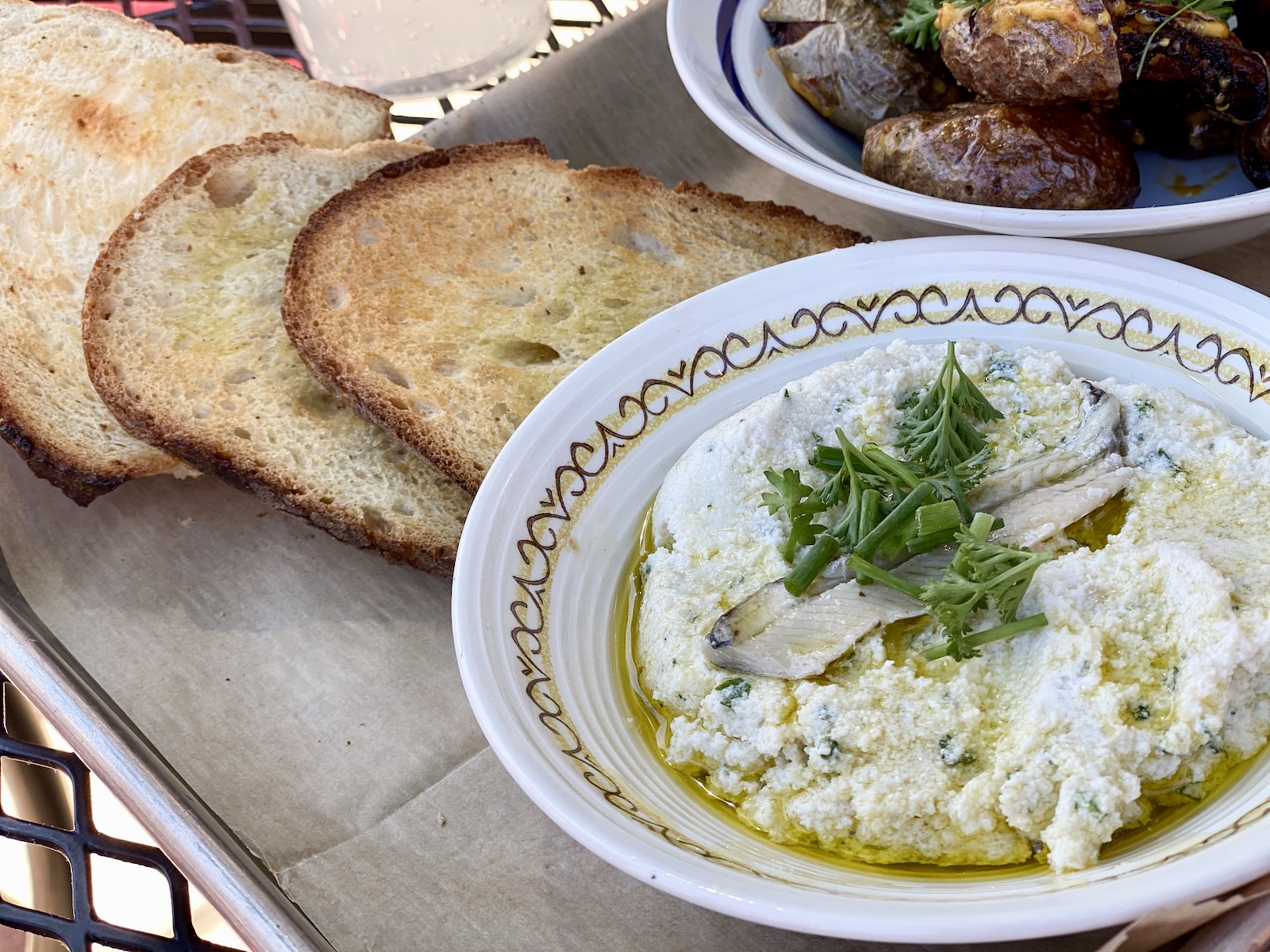 There are also larger plates, from a lamb sausage sandwich topped with Calabrian chili aioli, pickled shallots and a fried egg ($8), fennel salad flavored with orange and herbs ($7) and creamy burrata cheese served with slices of fresh melon ($9). 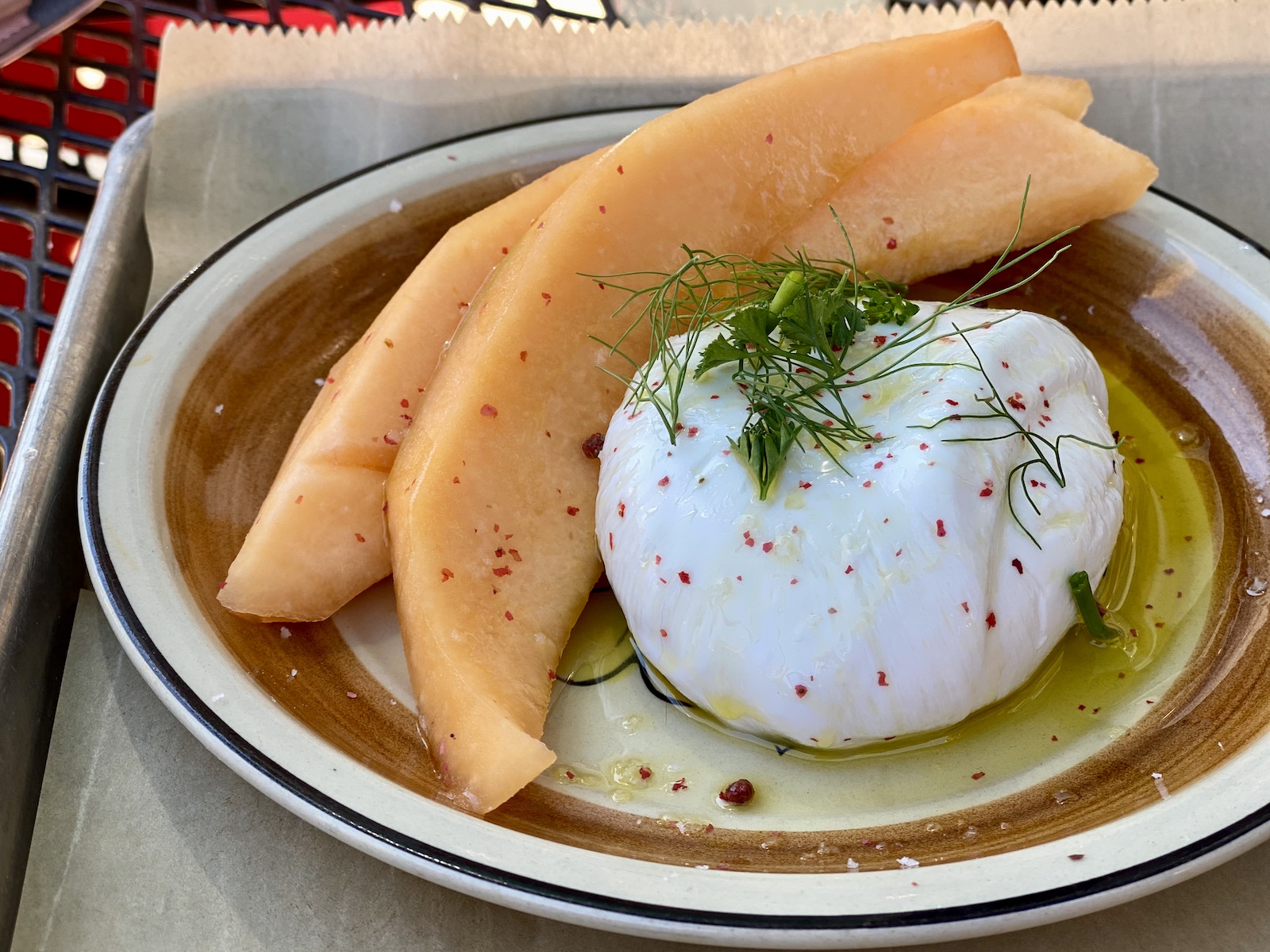 There are also infinitely comforting dishes like simple earthy mushrooms cooked into a Basque-style conserva and served over creamy polenta ($12); and beautifully crisp Spanish potatoes, smashed and tossed with roasted garlic oil and a spicy aioli ($6). 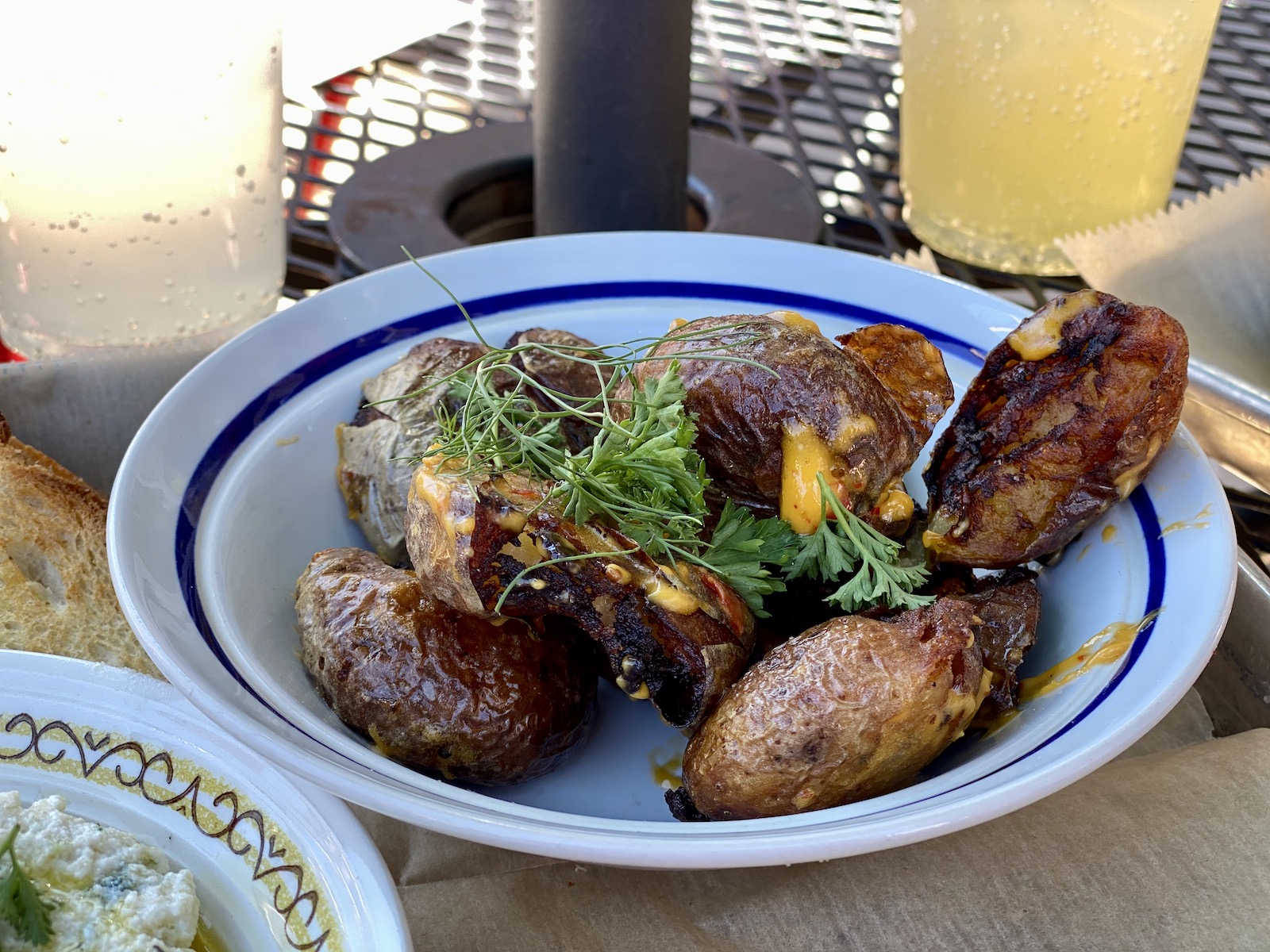 Mina’s menu, overall, lends itself to flexible meals, whether they be picnics in the nearby parks (grab a variety of plates and a bottle of wine from the bar and you’re set) or evening meals on the Crossroads patio where one can use the provided tableside QR codes to order a variety of dishes and beverages from throughout the food hall, delivered right to your table.

But it also lends itself to a multi-sensory dining experience such as the one planned for Sunday, Aug. 30 at 7 p.m.

Delve in with Mina's Basque dinner

The socially distanced Basque dinner is orchestrated to allow a safer dining experience. Parties are limited to six or less. Masks are required. And seating is limited overall. The event will also be held when the food hall is otherwise closed, providing a more controlled, intimate setting.

"I’m really excited to introduce more people to Basque dining culture," says Gentile. "We get a lot of questions from people when they come in to eat. But, I think the Basque way of eating is very similar to the Midwest. It’s very simple and seasonal. And they have so many great meats and cheeses."

The dinner menu will feature individual platings of a variety of dishes, each of which will be accompanied by an educational card which offers insights into the history and inspiration behind the dish. The six course meal will be accompanied by beverage pairings, including Basque cider, Txakoli (a dry, sparkling wine), Spanish red wine and a cocktail.

"We really miss that experience of going somewhere new and experiencing a new place," says Hoffman. "So the goal is to try to bring that to people here. This is a whole new world; but we’ve really put a lot of thought into orchestrating a dinner that’s as safe as possible. And we’re excited to see how it goes."

Tickets for the Mina Basque dinner on Aug. 30 are $120 per person, which includes six courses and beverage pairings. Tickets are available online (tickets are listed as an item on the Mina menu).

5 great reasons to head to the baaree in Thiensville

Lori Fredrich May 26 Dining
Do This

Vote now: Your favorite could be on the June menu at Georgie Porgie's

Lori Fredrich May 26 Dining
Do This