Al Jourgensen and his motley crew of all-stars tore into Turner Hall Ballroom Sunday night, though throughout the politically-charged night, the Milwaukee crowd was more polite than in the mood to party.

From there, Bell took over to growl out "Victims of a Clown," also off the latest album. The mayhem continued with another new song, "Punch In the Face."

Uncle Al, who sported a black t-shirt that read "Trump Hates Me," roared through "Senor Peligro" off the 2006 "Rio Grande Blood" album, while images of Latin American politicians and dictators flashed and splashed on the screen behind him.

And that’s about when the anemic mosh pit started. 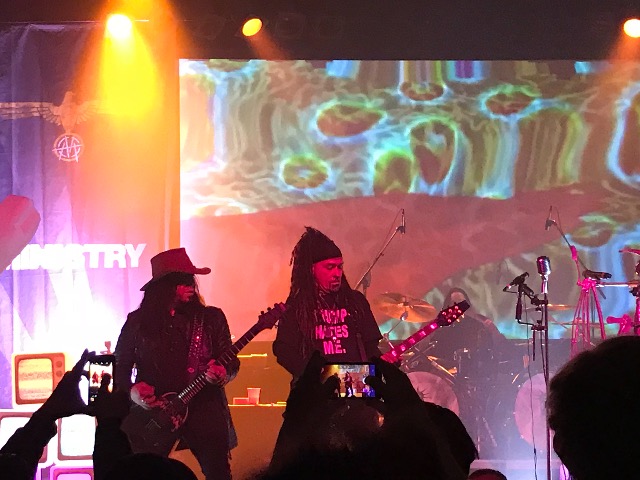 Milwaukee did not rage. Instead, the locals offered sedate shouts and hollers – and Jourgensen took notice, calling out the low energy in a taunting but not altogether humorless way.

The energy unleashed from the stage was not met with the same ferocity from the crowd, save for maybe the very front "rows" of the audience. But Jourgensen and his associates of anger were not dissuaded. They ripped out "Lies, Lies, Lies" and brought back Bell for "Wargasm" and "Antifa," also off "AmeriKKKant."

"C’mon, Milwaukee. You’re too quiet. Alright, we’ll stop the political (expletive). What do you need, Milwaukee? The old (expletive)?"

With that, Ministry delivered "oldies," including "Just One Fix," "N.W.O" and "So What." The pit passed a couple of bodies, in Milwaukee’s feeble attempt to ignite some ferocity.

The industrial metal band then closed the night with "Bad Blood," off 1999’s "Dark Side of the Spoon."

The tour picks up again on April 10 in Cincinnati.

Velia Tarnoff counts among the loves of her life her daughter, her husband, her friends, writing, developing theories, dancing, live music, Southern California, black coffee and red wine. She's happiest when she can put as many of those together as possible. WWith more than 20 years of experience as a radio reporter and public relations professional, Velia is a natural communicator who loves to hear stories, to share stories and to tell it like it is.

Velia earned her B.A. from the UW School of Journalism and is thankful for every moment she spent on that wonderfully wacky campus.

And, in the interest of full disclosure, Velia is the wife of OnMilwaukee.com Publisher Andy Tarnoff.