Since 2013, folks on Milwaukee's North Side have been enjoying the smoky flavors of Mister Bar-B-Que's brisket, pulled pork shoulder, baby back ribs, rib tips, half chickens, turkey legs and sausages. But soon those flavors will come to West Allis, too.

Since 2013, folks on Milwaukee’s North Side have been enjoying the smoky flavors of Mister Bar-B-Que’s barbecued brisket, pulled pork shoulder, baby back ribs, rib tips, half chickens, turkey legs and sausages at its location at 5908 N. 76th St.

But, beginning this spring, a second location in the former Boy Blue Ice Cream, 8322 W. Lincoln Ave., will bring those flavors to fans in West Allis.

"The building will need to be converted to be a four-seasons business," says Mister Bar-B-Que owner Jervel Williams. "We’ll have a dining room where people can sit down and eat. And we’ll be improving the look and feel of the exterior with some landscaping. We’ll also be adding ice cream to the menu, since Boy Blue was there for such a long time. There’s heritage there … tradition. And I really want to keep that going."

The community has been extremely supportive of Williams plans, he says. In fact, he’s been overwhelmed by the support he’s received for the new location.

"I’ve gotten letters from people who live in the area, and so many positive comments," he notes. "And that means something to me. I want this business to be a part of the community. And to be embraced like that is wonderful. I’m so excited to be able to build a foundation here and introduce our barbecue to a lot of new people." 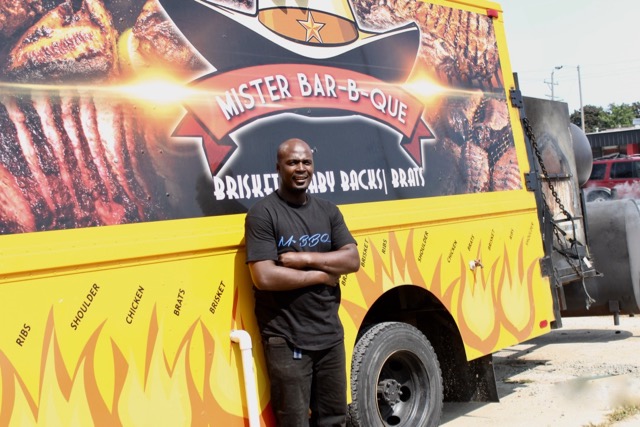 Williams also notes that curious West Allis residents won’t have to wait until spring to get a taste of Mister Bar-B-Que. In fact, thanks to his mobile food truck, which is equipped with a grill for smoking, he’ll be serving up barbecue and sides at three locations, including two in West Allis.

In addition to smoked meats, which are marinated, dry rubbed and slow-smoked over a live fire, Williams will offer a variety of sides including creamy cole slaw, potato salad, baked beans, spaghetti, BBQ spaghetti (with pulled pork), macaroni and cheese, greens (with smoked turkey leg).

Dinners, which include a meat and two sides, are $13. Full slabs of ribs are $25 and brisket and pulled pork sandwiches, served on bakery or Hawaiian buns with a bag of chips are $10. Sausages are $4 and also include a bag of chips.

Meats from Mister Bar-B-Que are served unadorned. However, customers have the option of adding any one of four sauces, including his traditional signature sauce (slightly sweet and vinegary), Kansas City (spicy), Memphis (sweet and mild) and Chicago (tangy, but not spicy).

"We’re also really open to giving people samples," he says. "If they haven’t had something and want to try it, we want them to be able to taste it before they buy." 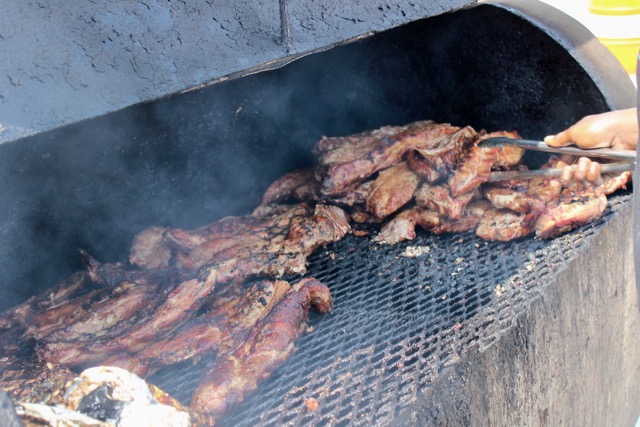 From hot dogs to barbecue

Williams started out 10 years ago with a hot dog cart on Old World Third Street. On the side, he started experimenting with barbecuing a wide variety meats.

From there, he upgraded to a trailer, adding a variety of barbecued meats to the menu.
"The business was going well," he said.

So in 2013 he signed a lease at 5908 N. 76th St. At that point, he bought a truck and equipped it with a smoker so that he could prepare meats for the restaurant and take the business on the road as needed.

Williams says he started his business because he had a passion for creating delicious, slow-cooked smoked meats. But, he also knows now that barbecue runs deeply through his blood.

"My parents separated shortly after I was born," he says. "And my mother raised me and my two older brothers on her own. She was good at everything from plumbing to electrical to mechanical. But she was also great at barbecue. She loved making smoked chicken and different kinds of fish, like salmon. She played around with different types of wood for the smoker until she came up with a custom blend that really gave the meat a uniquely sweet taste."

Unbeknownst to Williams, his father was also famous for his barbecue.

"I never knew my dad," he says. "But I grew up wondering about him. And when my my mother passed away from cancer in 2012, I looked him up. It turns out, he was a butcher. He’d save up to buy meat at a discount. And whenever he’d get enough meat together he’d fire up his smoker and feed all the neighbors barbecue."

Williams says his father passed away in 2013, shortly after they met. "At that point, I’d only known him for a year. But, I’ve gotten to know more about him through my half-brothers and sisters."

And his family’s legacy – from his mother’s custom wood smoke blend, to his father’s passion for meat and community – plays out every day through Williams’ work with Mister Bar-B-Que.

In memory of his parents, Williams says he will also be hosting the first Freddie’s Community Grill Fest in the Atkinson neighborhood sometime in October. Interested fans can watch for details on Jervel MrBarbeque Williams Facebook page.