There's a new bakery coming to the northern end of the Lincoln Warehouse, 2018 S. 1st St. in Bay View. And it's a project that's been more than a decade in the making.

There’s a new bakery coming to the northern end of the Lincoln Warehouse at 2018 S. 1st St. in Bay View. And it’s a project that’s been over a decade in the making.

Mor Bakery & Cafe, which is expected to open as soon as spring 2018, will offer a rotating selection of sweet and savory baked goods, breakfast and lunch items and an espresso bar featuring Anodyne Coffee.

The bakery will have a dedicated gluten-free kitchen, and many of the items served will also be free of both eggs and dairy. And, while the gluten-free aspect of the business is important, owner Traci Morgan-Hoernke says her her goal is to produce flavorful high-quality items that appeal to not only those seeking gluten-free treats, but also consumers who simply appreciate delicious edibles made with high quality ingredients.

"In some ways, I want the fact that we’re a gluten-free bakery to be an afterthought," she says. "It’s about using real, whole ingredients and creating things that truly taste good. I always say that everyone deserves Mor. And I really believe that."

The menu for the cafe is still in the works, but Morgan-Hoernke says that it will offer a selection of breakfast items including grab-and-go items like quiche and savory muffins. Lunch options will include housemade soups and wraps. Meanwhile, the bakery will feature a rotating selection of sweet items including scones, brownies, fruit crumbles and cupcakes.

"And there will always be cookies," she says. "My dad’s mother was a baker, and baking was how she expressed her care for other people, so there were always cookies in the house."

Morgan-Hoernke says she’s as much dedicated to making items that taste good as she is to making them with ingredients that are natural and free of gluten.

"Eating encompasses all the senses," she adds. "Gluten-free baking is about more than flavor; it’s about mouthfeel. An item might taste good, but if it doesn’t have that mouthfeel, it’s just not good." 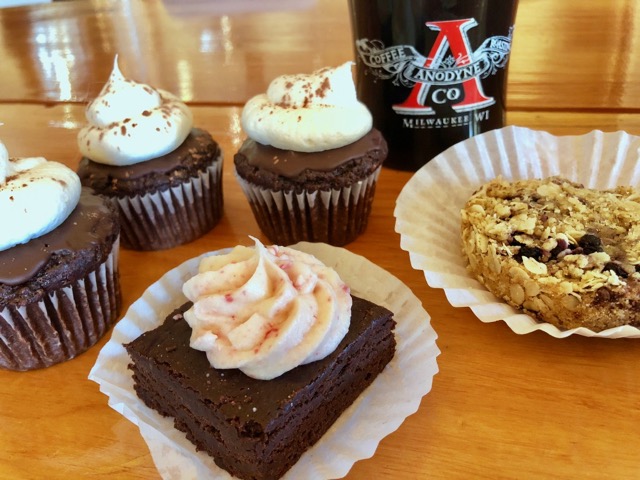 What’s in a name? Mor than you think

The stories behind business names are often compelling. And such is the case for Mor. In fact, for Morgan-Hoernke, the name was everything.

"Mor is is the word for ‘mother’ in Swedish," she says, noting that her mother was Swedish. "I’m a mother myself, and none of this would have happened if it weren’t for my son."

Morgan-Hoernke’s son August was born in 1997. He was 18 days premature, so he was smaller than average but otherwise healthy.

"He wasn't at all pudgy like normal babies. In fact the neonatologist pointed out that he had a lack of fat stores in certain areas of his body," she says. "But at the time, it wasn’t a red flag. He was a healthy little baby boy."

It wasn’t until August approached eight months of age that the doctor grew concerned about his unusually slow rate of growth. Over time Morgan-Hoernke says that August also began developing persistent ear infections, as well as a rash that covered his entire body.

"We went through so many doctors …" she says. "And, at some point, we narrowed the causes down to food allergies. At that time, there wasn’t awareness surrounding reactions to wheat. People still thought that Celiac Disease only occurred in one out of 5,000 people. But we went through the hoops and discovered he was allergic to a number of things: raspberries, blueberries, Yellow #5 and Red #40 food dyes and potatoes."

His health improved somewhat, but Morgan-Hoernke says that August still wasn’t growing at a normal rate.

Fortunately, she had the good fortune of taking a position with Linda Kramer and John Shaw, owners of the Gluten Free Trading Company, an early leader in gluten-free retail and the first dedicated gluten-free brick and mortar grocer in the U.S. And thanks to guidance and encouragement from them and a variety of their clients, she made the decision to try out a gluten-free diet for August.

"We put him on the diet, and he began gaining weight." she says. "In fact, he gained two pounds and grew an inch in six weeks. When the diet made a difference, we went back to the doctor. He was tested for Celiac Disease, Cystic Fibrosis and various pancreatic disorders. When all the tests came back negative, the doctor suggested we take him off the gluten-free diet. But, I was determined and somewhat obstinate at this point, so we kept at it. After a year, his body was no longer mal-absorbing fat from his diet. "

Gluten-free in a gluten-filled world

From there, Morgan-Hoernke says, she made it her mission to create as much variety in August’s diet as she could. But it wasn’t an easy task in an era before gluten-free goods were widely available.

"For a decade, I spent so much time finding foods that he could eat," she says. "I shopped at Asian markets and every type of grocery store I could find. Three times a year, I’d pack up a cooler to drive to Trader Joe’s in Illinois, which was one of the places I knew I could find items that he could eat. And I began experimenting with gluten-free baking."

For years, she experimented with various flour substitutes. Along the way, she found herself creating new alternatives to comfort food items that contained gluten.

"It really turned into kitchen chemistry," she says. "I’d pull out a number of regular recipes off the internet, look at how they worked, and then rework them with gluten-free items. There were lots of failures. Honestly, there were things I made that even nature wouldn’t eat. But I also came out with a lot of really great recipes that people really enjoy, whether they’re eating gluten-free or not."

Nearly a decade later, the idea of starting a bakery from which to sell her goods began to take shape.

"When my mother passed away in 2007, I took a moment, paused and reflected on life. I took a class with WWBIC, wrote a business plan and started thinking about opening a bakery. At the time there were no dedicated gluten-free kitchens in the entire city. Unfortunately, by the time I had things together, the economy had taken a dive and banks had stopped granting loans to small businesses."

She took on other work and tried again in 2013. Two failed leases and four years later, she found the space in the Lincoln Warehouse. And she says she’s counting on the fact that the third time is the charm.

Construction on Mor Bakery & Cafe, which will be carried out by Ryan  Strycker of Vision Design (whose company also designed spaces for Morel and Lost Valley Cider) is set to begin by the new year. And, despite its currently nondescript warehouse look and feel, the 2,000-square foot space will ultimately be transformed into a bright cafe with floor-to-ceiling windows, a neutral color palate and seating for guests who wish to linger over a cup of coffee.

"My vision was to create a place where anyone can come, eat and feel comfortable," Morgan-Hoernke says. "And, fingers crossed, this will be that place."