Pineapple habanero is November's wing of the month at Motor at the Harley-Davidson Museum. We stopped in to try them.

Pineapple habanero is November's wing of the month at Motor at the Harley-Davidson Museum. Intrigued, my co-worker Carolynn Buser – a fellow wing nut – and I popped over last week to give them a try.

I ordered a the special wings – which are sold in a one-pound order for $11.95 – and Carolynn couldn't resist the Cooler Ranch Doritos, which are $10.95 for a pound. In each case, a pound equaled eight wings of decent, but not gargantuan size.

You can see November's special wings in the photo above and the Cooler Ranch Dorito variety here below: 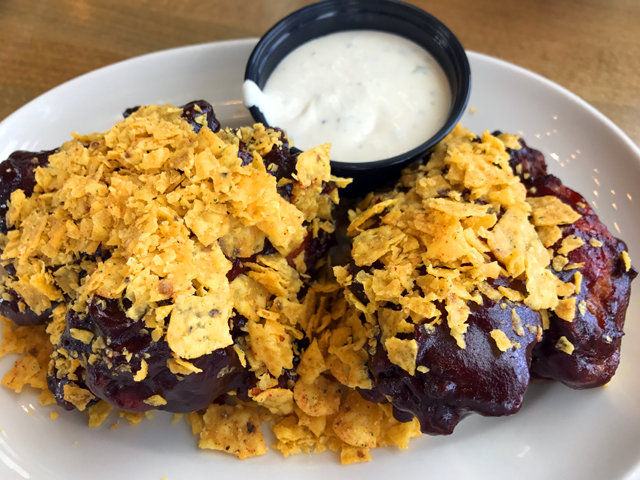 The menu describes the November wings as "tossed in a spicy sauce of pureed pineapple and fresh habanero peppers." I was pleased that the wings weren't oversauced, which can not only be messy, but sometimes just plain too much in terms of flavor. More is not always better, especially when it comes to fruit-laden wings, which can be cloyingly over-sweet.

I enjoyed the light pineapple sweetness of the wings (which we very juicy on the inside), but expected more heat from the habaneros. On the first drummy I tried, there was nary a hint of tang. As I worked my through, I found some had a dash of heat and others not so much.

I'm not a super-heat addict, so I wasn't heartbroken, but I would've liked a bit more. Nevertheless, these wings were good and I would order them again, though I'd consider asking up front if the heat could be notched up a tad.

As for the Cooler Ranch Doritos, Carolynn says...

"The nostalgia of Cool Ranch Doritos is a strong lure. These tangy – although a bit messy and wet – wings have a fun crunch at the end."

I sampled these, too, and liked the tanginess of the heavily applied sauce but the chips didn't really do anything for me. It seemed more gimmick than anything else. I'd like them better without the Doritos.