The City of Milwaukee has received a $150,000 National Endowment for the Arts grant for a project at the new Milwaukee Public Library branch in a mixed-use development in the former Hills Building, 906-910 W. Mitchell St.

The City of Milwaukee has received a $150,000 National Endowment for the Arts grant for a project at the new Milwaukee Public Library branch in a mixed-use development in the former Hills Building, 906-910 W. Mitchell St.

Mayor Tom Barrett announced the grant – which will fund the "Gathering Art, Stories and Place" project at the library, which is expected to open Sept. 30 – on Thursday morning. The program will also receive funding from MPL.

For the project – which was created by the Milwaukee Arts Board and the Department of City Development – a team will stage a series of storytelling programs in the library’s maker space, as well as other indoor and outdoor spaces, according to a press release from the mayor’s office. 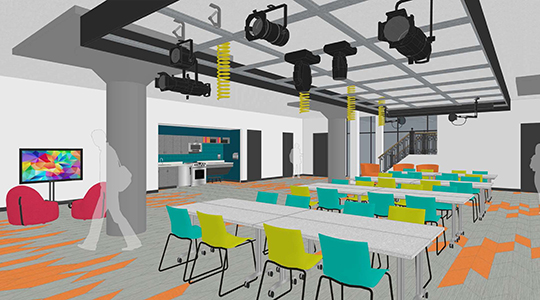 A rendering of the Mitchell Street library's maker space.

The programs – which will be led by MPL and Artists Working in Education with the support of Ex Fabula, the Greater Milwaukee Association of the Deaf, as well as are schools and community centers – will include an artist lecture series, writers’ workshops, an archive of stories collected in the neighborhood, a pair of artist-in-residence programs, a mobile youth arts studio and a visual storytelling festival with hearing-impaired storytellers.

"This project supports the City’s plan for the formation and growth of artistic projects that are responsive to the needs of our diverse community," Barrett said in the press release.

"The project also highlights how historic commercial districts can play an important role in Wisconsin’s overall economy, functioning not only as prominent employment and business centers, but often as the foundation of the municipalities they serve."

Library Director Paula Kiely said in a statement that the goal of the project is to bring together the branch neighborhood’s diverse neighbors.

"We are honored to be selected as an Our Town grantee," Kiely said. "Not only do libraries inspire and foster new experiences, in an increasingly networked online world, libraries bring our community together and play a significant role in neighborhoods as a trusted entity.

"By engaging neighborhood residents in this project, we will fulfill the role of the public library in building community pride and investment, ultimately helping the City reach its goals for social and economic prosperity."

Library spokesperson Eileen Force-Cahill said this new branch is unlike any other in the MPL system.

"It will be the largest neighborhood library in the system, housed in a historic building within a dynamic business district in one of the city’s most diverse neighborhoods," she said.

"The new Mitchell Street branch has features like a teen maker space and other collaborative places for people to gather and connect. We are very excited about opening this library to the neighborhood next month."

According to Sam McGovern-Rowen – project manager for MPL construction – the library is getting ready to install fixtures and furniture in the Mitchell Street branch, one of the final phases of construction.

"Scherrer – our general contractor – is currently refinishing floors in the lower level and installing lighting," McGovern-Rowen told me this morning. "Most exciting is the recent re-installation of the restored historic mezzanine railing and new 'social stair' to reach the mezzanine."

Stay tuned for a pre-opening peek inside.